Too girly for the job? 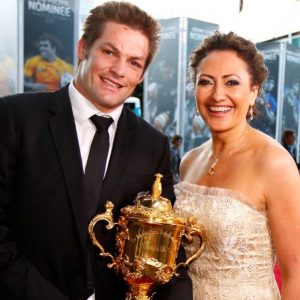 In my early days as a Sky TV journo, I was assigned to interview Justin Marshall who was the All Black halfback at that time.

Then, the rugby world hadn’t got used to female sports journalists.

What could I possibly know about men’s sport, and especially All Black footy?

That was a widespread view within the rugby fraternity – and I was worried that would be the vibe I’d get from Justin.

Actually, it took a while to get any vibes at all from him, because he was late for the interview.

But when he did arrive, he was typically brash. No respect for the media.

Luckily for me, when the cameras started rolling, his professionalism kicked in and he was great.

But I came across plenty of others in the media business whose professionalism fell short and whose lack of respect loomed large.

It didn’t offend me, I ignored it. I knew that, in my case anyway, it was misplaced. I’d done a substantial rugby apprenticeship and I knew my stuff.

That apprenticeship began when I was a girl, in Christchurch, because my dad, John Robinson, was mad about rugby and league. Watching footy with him on a Saturday was our bonding time.

And there was more encouragement from his dad, Francis Robinson, who’d played rugby into his sixties, and was desperate for one of his sons or mokopuna to make the All Blacks.

One afternoon, my grandad Francis dug out for me the letters, photos, and jerseys from his grandfather, Toby Robinson, who played for the Maori All Blacks in Australia, France, and Canada in 1928.

That was awesome. And I was absolutely caught up with the family passion for the game, although it didn’t translate immediately into heroic rugby deeds on my part. It wasn’t until my second year at Otago University that I made the Otago B team.

I was a girly winger then but the following season Sue Garden-Bachop took one look at me and decided I was an open-side flanker.

That set me off on an 18-match test career with the Black Ferns, beginning with a blitzing of France, Canada, and the USA in 1996, a World Cup win in Amsterdam in 1998 and another World Cup title in Barcelona four years later.

I also played Sevens for New Zealand in Hong Kong and still play rep touch – and my latest buzz is half-marathons.

Along the way, there’ve been all sorts of rugby (and life) lessons learned from Sue, a wonderful woman who later died of leukaemia, and from the Black Ferns coach, Darryl Suasua, who had the thankless task of trying to mend my wayward ways.

Team-mates such as Anna and Fiona Richards and Monalisa Codling have been invaluable, too.

So when I arrived at Sky TV, I wasn’t entirely clueless. I’d done a BA and a Phys Ed degree, I’d trained as a journalist, I’d worked for Mana Maori Media (including a stint in the Press Gallery) and I’d been the sports producer at xtra.co.nz managing and editing websites such as theblues.co.nz and teamnewzealand.com.

Of course, that hasn’t made me immune from making mistakes on air. In fact, I made a couple in my first Super Rugby commentary – and then was foolish enough to go through the embarrassment all over again when Radio Sport focused on my performance and asked what a woman would know about rugby anyway.

I suppose there’ll always be die-hard male chauvinists who ask that question. But all of us in broadcasting can quell the criticism by doing our homework, doing the research and knowing our stuff.

It can be time-consuming and laborious. It’s one of the downsides. So, too, are the travel, the airports, the hotels and the takeaways.

But, naturally, there are upsides. Just as in rugby, there’ve been generous and perceptive coaches (Andrea McVeigh and Ric Salizzo, for example). And entertaining team-mates, such as Justin Marshall with his snakeskin shoes and frosted hair. He is now a fabulous buddy.

Then, as a bonus, there’s the touch of glamour. Like being fussed over in the makeup room before I host a show – which can be so comforting I just about nod off. Sometimes, too, there are flash clothes, jewellery and face products.

And, when I think about it, I haven’t copped anything like the injuries I used to get in my playing days. It’s not a bad life.