Too posh for league? 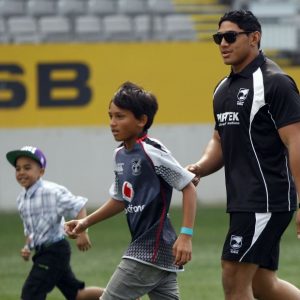 The pathway for our kids to reach the top in rugby league, as Jason Taumalolo has done misses critical steps at most Kiwi high schools. Photo: www.photosport.co.nz

If you go by the media coverage, rugby league – along with rugby union, netball and cricket – is among the most popular of New Zealand sports.

So you might assume that it receives a fair bit of attention and support at our high schools. Not so. Most of our schools don’t offer the game at all.

Last year, fewer than 3,500 of our high school kids – that’s girls as well as boys – had a crack at the game at school. And an overall count of participation in the various sports on offer at school had league down at 18th on the list. Even lower than table tennis.

Some weeks ago, I wrote a feature for the Sunday Star-Times about what seems to be a prejudice that is holding back the sport. In the course of preparing the story – and then after it was published – I was given a number of reasons for the situation. They included these arguments:

Perhaps the most critical observation, though, was that league has limited support at school principal level. Successful sports have allies within the school system – and not many league people have gone on to run our schools.

There are at least a couple of notable exceptions though. They are Iva Ropati (Howick College) and Willie Ford (Tokoroa High).

Willie is a life member of Tokoroa’s Pacific rugby league club, where he won nine grand finals as a player. In the early 1990s, he was a fitness trainer for the Kiwis and later he had the same role for the NZ Maori team. He was born in Arorangi, Rarotonga and is of Maori (Ngati Maniapoto) and Cook Island Maori (Penrhyn and Aitutaki) descent.

In 1956, when he was a baby, his family shifted to Tokoroa where he went to the local high school which he now heads.

When Willie surveys the school scene, in the Waikato region anyway, he sees league frequently being blocked by principals who don’t have any special liking for the game. So they provide minimal or no support. His own school plays union and league, but it can’t get as much league action as they’d like.

“There is far greater interest in rugby league than rugby union in the school,” says Willie. “I’ve always said that we could easily field six boys’ rugby league teams, but there isn’t enough competition from other schools.”

Iva Ropati comes from a rugby league background too. He played for the Kiwis, as did two of his brothers, Tea and Joe. At one time, five of the Ropati boys turned out for the Mangere East Hawks in the Auckland club competition.

The boys’ father was a high chief in his Samoan village of Lalomanu, but he raised Iva and his brothers on Mt Wellington’s famed Panama Road. That was a real league nursery, where the Ropati neighbours included Clayton Friend, Bob Jarvis and Stan Napa (whose son Dylan helped the Sydney Roosters win an NRL premiership last year).

Iva went to Otahuhu College and then completed a Master of Arts degree at Auckland University. He’s now the principal of Howick College, which also offers both rugby and league.

He says there’s no doubt that league is deliberately excluded from the curriculum in a number of schools around the country – and that some of the exclusion is due to “tradition”. He’s referring to a rugby tradition – and one which “won’t permit choice”.

Iva, however, can’t see any problem with the two sports working side by side. “Half of our 1st XV,” he says, “are league players who regularly turn out for their club and school. This arrangement is endorsed by the school. We need not battle it out with our clubs. We can co-exist.”

There are examples, though, of the game thriving at schools where the principal hasn’t been steeped in rugby league. Auckland’s St Paul’s College, for instance, has been our most successful rugby league school although the principal, Mark Rice, doesn’t come from a league background. But he’s learned plenty about the game and has coached the 1st XIII. He says you can build momentum if you have key teachers offering options for the kids.

That’s Willie Ford’s experience too at Tokoroa High. His teaching staff doesn’t have substantial league expertise, but he can call on teachers who know how to make things happen. He points to their school team who won the NZ school chess championship in 2010 and went on to represent New Zealand in Melbourne.

“The following year,” he says, “I asked the teacher in charge of the chess team (Billy Maea) if he’d like to manage our 1st XIII team to the rugby league nationals. He said he didn’t have a background in rugby league, but I said I wanted champions – people who knew how to win.”

Billy has subsequently been named ‘manager of the tournament’ at the NZRL’s national schools’ tournament.

So that’s one bit of the solution – roping in good people, regardless of their background. Another is waiting for more league kids, as may now be happening, to come into schools after training as teachers.

Then the next wave of principals is less likely to be averse to league. And that trend is no doubt being helped by the high profile of the NRL and the Warriors, especially through their stars like Shaun Johnson and Manu Vatuvei.

Allen McLaughlin, who has commentated on league for 30 years, sees another key element for progress. It doesn’t involve patience.

“We need more and more people hammering on the table until something is done about it,” he says. “Protest. Go to the media.

“Or why not go and front-up to the headmaster and say: ‘I want a league team in this school. I want my boy to be able to play rugby league. It’s a career opportunity. He can make some money. He can make a livelihood out of it.’”

We’re told that schools are in the business of providing opportunities for their students. We’re told that interest from kids in playing rugby league is at record levels. Yet most schools still don’t offer the game.

It doesn’t add up.