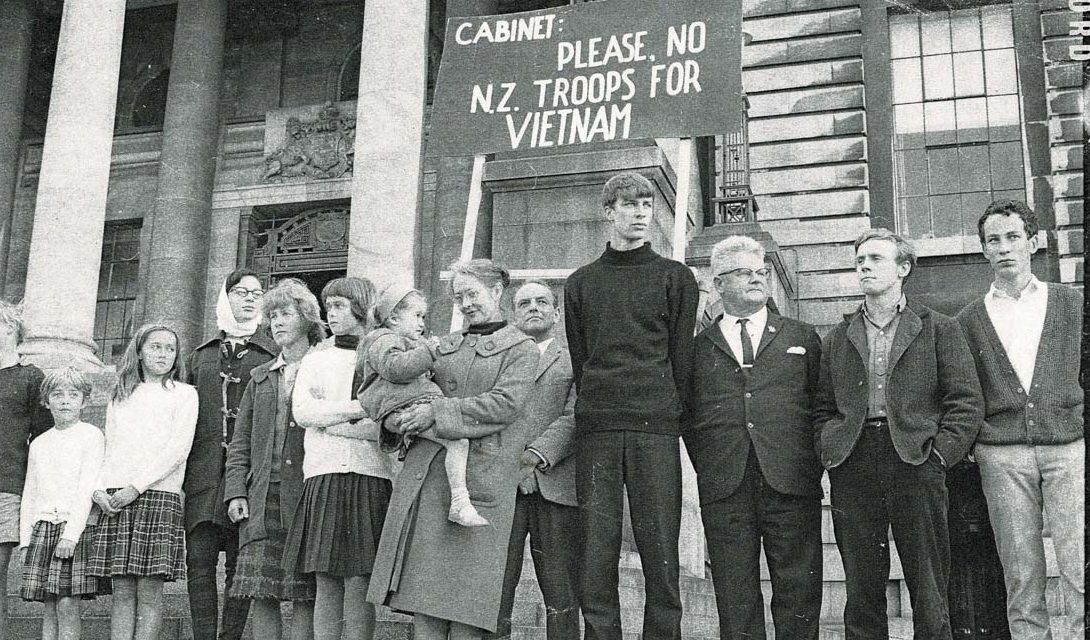 Protesting against Vietnam war. Catherine's mother is holding the baby and her sisters are in white cardigans. Catherine is wearing the headband. (Photo: supplied)

Catherine Delahunty has committed much of her life to encouraging other New Zealanders to face up to the dodgy and damaging elements in our country’s past and present — especially the Treaty  breaches. In this story, though, she’s looking back at her family’s history, and at what, for some of them, has been an inconvenient (and therefore hushed up) break in their white ancestry.

My grandfather, Phillip Savage, was a small man with a big title. He was a doctor and colonel in the British Indian Army, which enforced British rule in India from 1858 till 1947, when it won back its independence.

My mother’s father was supposed to be a purely English gentleman. Born to rule. Much of the time, he wore an ornamental sword. He died before I was born. But in the photos I’ve seen, there’s something about him that doesn’t quite stack up. Something that doesn’t fit that British Empire mould.

When the British Raj collapsed in 1947, Phillip retired to Aotearoa. By all accounts, he found this place quite confusing. “Jack thinks he’s as good as his master,” he was heard to say.

Perhaps his confusion is understandable. His family had been in India since 1810, and he’d inherited the conviction that Jack — or more likely, Jagdish — was most certainly not as good as his master.

Our family tree goes right back to 1810 — and it’s complete, except for one omission. Four generations before Phillip, a soldier ancestor had married a woman about whom we know nothing.

And the reason this female ancestor of mine is a mystery is simple. She was either Indian, or what was then called “Eurasian”.

It has taken until the 21st century for our family to understand and acknowledge this. We now know — thanks to some serious sleuthing by my cousin — that our ancestor Billy Glascott, who was a soldier for the East India Company, married an Indian woman from Maharashtra State.

Billy’s job was to protect the company’s assets. He died of an illness, aged just 32. We have no name for his widow, our female ancestor from Maharashtra State. We can’t honour her as she should be honoured.

My Raj grandfather Phillip Savage, then, was a direct descendant of that marriage between this named man, Billy Glascott, and a nameless woman.

We don’t know how much Phillip knew about the Indian side of his heritage. In letters he wrote to my grandmother in England, before she joined him in India, he described how, in his circle, people of dual Indian and English heritage were called “flies in milk”.

It’s possible that he didn’t know that he was himself one of those “flies in milk”. But even if he did know, he was never going to admit it. Because he simply couldn’t afford to. There was no place for Indian ancestry in the British Raj. No status, no promotion, no welcome. Just this unquestioned, bizarre, and wholly misplaced reverence for “whiteness”.

My mother June, Phillip’s daughter, was also born in India, in 1923. She was one of eight brothers and sisters who were raised in military compounds across the continent. She grew up speaking Hindi to her ayah, her nurse. I remember her reciting Humpty Dumpty to us in Hindi, a generation later.

June’s family even had a pet leopard, named Pat Tucker. And sometimes, a Rajah’s son would visit them, riding on his elephant. All other Indians were considered mere servants.

For ex-pat parents like Phillip and his wife Phyllis, sending their kids off to boarding schools was the norm. And because New Zealand boarding schools were cheaper than English ones, that’s where they sent June, in her early teens.

She always told us that this separation from her parents, her siblings, and India, was an icicle that entered her heart then, and which forever remained frozen.

So that’s my mother’s side. 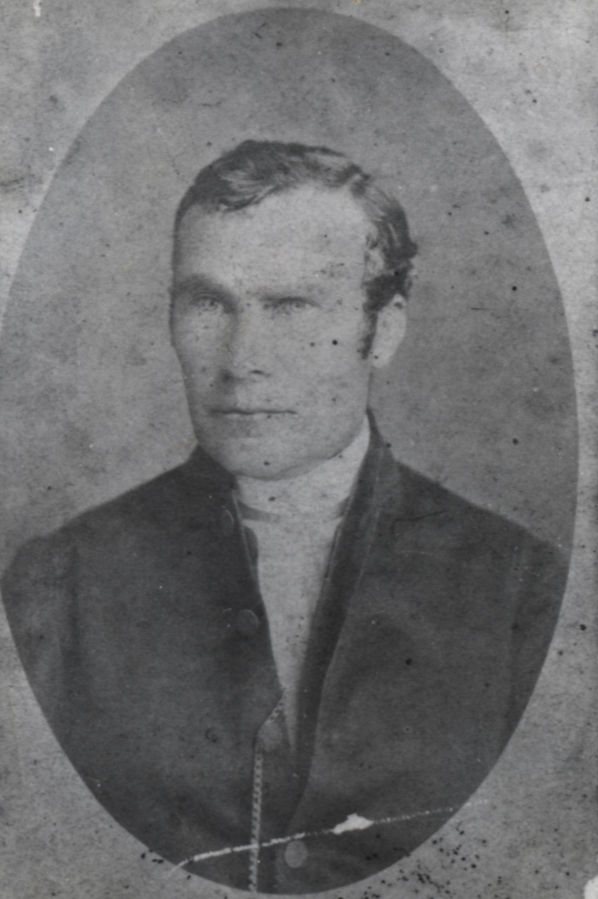 My father’s family had no such loyalty to the Empire.

They came, on both sides, from southern Ireland, and they arrived here between 1849 and 1864. My great-grandfather, “Black Pat” Delahunty, along with his grandmother Bridget, came to Thames in 1864. I’ve recently found her grave there.

The Delahuntys had endured several famines and the English occupation. They were survivors, with a history of male alcohol addiction, song, poetry, and radical left-wing politics.

They were so staunch that, in 1957, as my grandfather Patrick was on his deathbed, my father tried to console him by telling him that the “worm has turned. We now have a Labour government”.

My grandfather was unimpressed. Before turning his face to the wall, he said: “What good is a worm, even if it does turn?”

These forebears of mine — children of the Raj and children of the Irish poor — settled comfortably into New Zealand. Although it took my Irish family much longer to gain traction than my mother’s lot. In the early 20th century, for example, ads for rental houses often included exclusionary clauses. “No Maori” these ads stipulated. And “No Irish.”

So, although my mother and father came from different planets — Irish communist songs and cursing vs British stiff upper lip — they had much in common.

They both opposed “imperialism”, for example.

As a child, I didn’t know what that was. But I knew it was bad. We were forbidden to meet our many cousins, simply because their parents were too “right wing”.

We grew up knowing all about the atom bomb, and the Vietnam war. Words like “revolution” and “picket line” were staple fare at dinnertime.

Yet the truly remarkable thing to me is that we knew precisely nothing about our own background, nor of the history of the land we lived in. For all my parents’ fervent left-wing politics, and their commitment to social justice, they didn’t escape the collective Pākehā amnesia about what was going on under their noses.

Not once in the household in which I was raised did I hear mention of Te Tiriti, or indigenous rights, for example.

Instead, “Māori time” and “Māori day off” were expressions used without any shame in my 1950s childhood.

I vividly recall the books we were given as young kids — books about wolves, foxes, rabbits, squirrels and red robins, castles, crusades and white princesses.

There were no kākāpō, tūī or kiore stories.

I could recite poems about hero boys on burning decks and green and pleasant lands. But I never heard poems about Māui and Hinetītama, let alone hero stories about Te Puea, Titokowaru or Te Kooti. 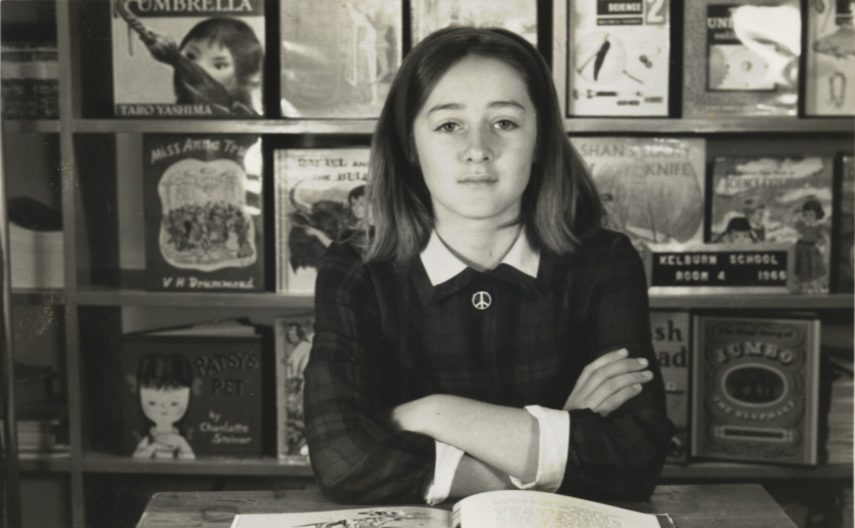 The more I know of both my Irish and British India inheritance, the more it teaches me about the contradictions, inherited prejudices and hidden stories, buried down to the bone, but now confirmed by my DNA.

Has much really changed? In making any judgment about past harms, I have to acknowledge present benefits to my generation of Pākehā. And I have to ask questions.

I guess that’s one of the reasons why, for the last 30 years, I’ve embraced the sometimes uncomfortable mahi of being a Treaty educator. In my own way, perhaps, I’m trying to make amends for a denial of racism which not only afflicted my family, both on the left and on the right, but which has afflicted Pākehā society, generally. I see — and I am consumed by — the need to do what I can to honour Te Tiriti.

But I don’t kid myself that I’m any better, wiser, more far-seeing or fairer than any of my forebears. They were only human. So am I.

So, I also ask myself: What are we not seeing in our day? What are we taking for granted in our time?

I can look back and see the damage that we’ve been part of. But can I see the issues of the present with the same clarity?

There are voices offering a wider view, a deeper challenge to my cultural bubble, and those voices have always been here.