Let’s not get too gung-ho about freedom of speech 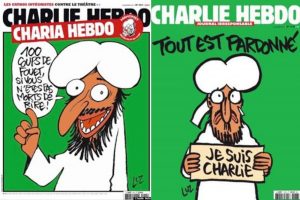 I’m not a journalist. Nor am I an academic. I’m not religious either. And, although I hate violence, I could happily look the other way if a pedophile was about to be dealt to by a crowd baying for blood. And that probably illustrates the inconsistency most of us have when it comes to our own morals and principles.

Watching reports of the tragedy unfolding in Paris, the mass rallies, world leaders linking arms – and now the latest cover of Charlie Hebdo – it stirs up conflicting emotions and responses for someone like me, watching from Auckland.

First, there was the shock that two humans could execute 12 other humans in cold blood. The blurred images on telly covering the prone and injured policeman about to be murdered only increased the horror. We could all see the gunman take aim.

We also know that Ahmet Merabet is not the first Muslim to die at the hands of a fanatical Islamist. After the gut-wrenching slaughter of the 141 mainly children at Peshawar’s Army School, I looked at my own 6-year-old and thought the world has truly gone to hell in a hand basket.

The reality is people are dying at the hands of the same violent extremists in Syria, Iraq and Nigeria. Why such an outpouring of emotion in the West? Is it because most of the victims were journalists? So the media went hard out on this one? Is it because we characterise the other killings (in faraway places we can’t spell) as ‘normal’ and therefore attach less value to their lives? Is it because the latest massacre happened in a city regarded as the most romantic in the world, one many Kiwis have visited?

Paris, full of charming cafes and beautiful museums, sits within a country whose politics are flanked by extremes on both the right and the left and whose past doesn’t always scream Liberte, Egalitie and Fraternite. Can’t say I ever gave it much thought though as I quaffed back crème brulee in Le Marais.

The French government, juggling (and sometimes accused of contributing to) the rise of Islamophobia on one side and radical Islamists on the other, carries some shameful historical and colonial baggage. It is also playing its part as an active member of the Western-Arab alliance against ISIL. Away from the cobbled lanes, there is poverty, unemployment and, one could assume, festering resentment. “Gay Paree” is not so gay for everyone.

I remember watching the US strikes over Baghdad and being told Sadaam Hussein was the devil incarnate. Then it was Osama Bin Laden. There’s jihadist Islamism, which advocates violence to impose extremist dogma on both Muslims and non-Muslims. The Taliban and Al Qaeda are now jostling for headline space with the latest bunch of bloodthirsty fanatics. ISIL have taken things to a whole new level with their beheadings and slick recruitment videos, which bizarrely, are often featured on New Zealand news.

The Western-Arab Alliance is led by the USA and includes Saudi Arabia. Both are known for backing the odd fanatical group themselves. In fact, Saudi Arabia is quite big on public executions. Beheadings. These are sometimes followed by crucifixions. You really don’t want to know. Even while the Paris hunt was underway for the Al Qaeda sanctioned killers, Boko Haram murdered over 2,000 people in two separate attacks in Nigeria.

The names, collusion, inconsistencies and hypocrisy are a bit of a blur. It’s hard to figure out who is funding who to kill who, and why. Something pretty much everyone agrees on is that, since all the strikes and invasions, things have gone from bad to worse to unspeakable.

The attacks in Paris were framed as the most brutal kind of censorship, a strike against ‘freedom of expression.’ So let’s go there, then.

There has been much talk of the style of journalism represented by the satirical magazine Charlie Hebdo. Some suggest the chickens have come home to roost. While it’s pointless trying to figure out the warped logic, it’s probably more likely the killers were looking for maximum PR coverage.

The Oxford Dictionary defines satire as the use of humour, irony, exaggeration or ridicule to expose and criticise people’s stupidity or vices, particularly in the context of contemporary politics and other topical issues.

France has a reputation for a biting, sarcastic kind of satire. No doubt someone will be satirising the satirists and their phenomenal lift in sales. No one will be offended because that’s ‘freedom of expression,’ folks. And that’s satire.

We know that good satire can contribute to political debate. How helpful is bad satire though? Does freedom of speech mean the freedom to publish or broadcast racist, homophobic and xenophobic works? Isn’t that all slightly retro, stuck in the past, old school stuff? When something is reinforcing stereotypes and caricatures, why is it protected under ‘freedom of speech?’

When it comes to freedom of speech, do we really have to accept the bad with the good? Isn’t that a bit, well… fundamentalist as an approach?

Given the mess our world is in, does the lampooning of religions or minority cultures serve a purpose? Should the rest of us just lighten up because after all, nothing is sacred? In fact, let’s send up the sacred because (a) it’s not sacred to me and (b) it will be funnier! No doubt Muslims around the world must be falling on the floor with the latest Charlie Hebdo cover. Yeah, right.

Hell, I love a good laugh. The question is whether those minorities and communities who are often the butt of the joke get an equal opportunity to send up the dominant culture in the media? Where is the level playing field?

Because, to draw a long (but relevant) bow from the discussion, the platform for criticising the establishment is mostly controlled by, well… the establishment. It’s not like we see many Muslims on New Zealand television, unless there’s a killing somewhere in the world and local Muslims are called upon to apologise for the actions of some nutcase they can’t even relate to. And that’s weird too. Muslims who aren’t extremists are more likely to end up on the hit list than the rest of us.

Similarly, Maori are invited to comment if the mainstream media thinks an issue is relevant to Maori or is a ‘Maori issue.’ Otherwise, despite being affected by every single policy in our country, we are fairly invisible in mainstream broadcasting. Yes, we have a parallel Maori broadcasting system but should that mean mainstream media is free from any responsibility to ensure indigenous positions are represented to wider society? In other words, to what extent can there be real freedom of speech when marginalised cultures and communities have limited access to major media platforms?

With their latest cover, Charlie Hebdo demonstrated their lack of regard for anyone else but themselves. ‘It’s not the cover the world was waiting for,’ was the refrain. ‘But it’s the one we wanted.’

I am so not Charlie for one simple reason.

Muslims and non-Muslims are facing down a common enemy. We should be looking at ways to express our solidarity with each other, to close the gaps between us instead of widening them. Good on the NZ Herald for respecting Muslims in Aotearoa by not printing the cover, showing there’s no need to do something just because you can.

So what can you and I do to be useful?

We can reflect upon the responsibilities that come with exercising freedom of speech. I’m concentrating on at least using the right terminology so as to not confuse Muslims with Islamists or Islamic extremists.

‘An Islamist is an advocate or supporter of a political movement that favours re-ordering government or society in accordance with laws prescribed by Islam. Do not use as a synonym for Islamic fighters, militants, extremists or radicals who may or may not be Islamists. Where possible, be specific and use the name of militant affiliations: al Qaeda-linked, Hezbollah, Taliban etc. Those who view the Quran as a political model encompass a wide range of Muslims from mainstream politicians to militants known as jihadi.’ (Associated Press)

Yeah it’s a head-spin but maybe that’s something we can do as individuals. Instead of carelessly tossing out phrases like, ‘all Muslims are nutters,’ ask yourself if it’s true, helpful and kind.

OK, I pinched that out of some greeting card but you get the point. I reckon it is the responsibility of all of society – not just Muslims, not just journalists, not just academics or politicians – to drill down as far as we can to identify the inconsistencies, to question the hypocrisies, to examine our collective conscience so we can begin to untangle ourselves.