Patrick Thomsen: Why Moana could actually be good for us 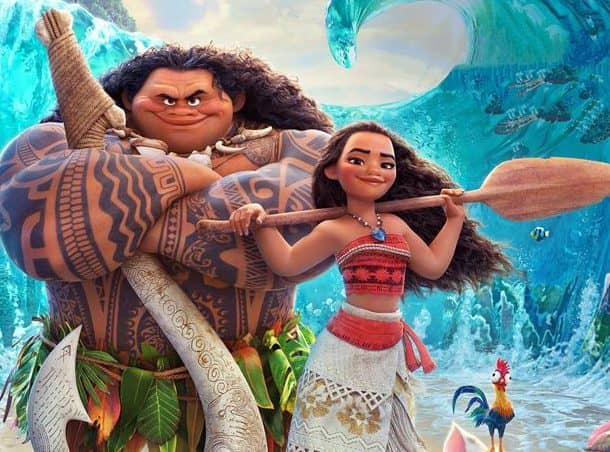 Disney’s latest film, Moana, featuring its first Pacific Island princess, is being released in New Zealand on Boxing Day. But, after months of controversy and damning criticism of the corporate behemoth by Pacific academics, should we be giving it a wide berth?

Yeah, nah, writes Patrick Thomsen, who saw Moana in the US on Thanksgiving weekend.

Moana, especially the making of, has been a topic of hot discussion.

As a wannabe academic myself, I’d be lying if I told you that I was unaffected by the loud, sometimes deafening, criticism put forward by some of our brightest minds.

Moana, it was said, was Disney at its seductive best. Corporate cultural imperialism. Cultural appropriation. And disastrous for the representation of Pacific people.

Then there was the controversy over obese Māui, followed by that ghastly skin costume.

To be honest, I was as vocal a critic of Disney as anyone else. But when Moana came out on Thanksgiving weekend in the US, I felt bound to go and see it. Strictly in the interests of research, of course. I could at least say I’d watched the film before I started running it down.

And so it was that I lined up with two others on a typically rainy Seattle evening, with my critical hat fastened on tight. I was determined not to let Disney seduce me.

But, by the time the end credits began to roll, it became a struggle to leave the theatre. My T-shirt was stained with tears, and my eyes were redder than Snow White’s cheeks. I had well and truly been won over by Moana.

It’s a magnificent film. I’m no movie critic, but I feel confident in saying that Disney’s CGI effects may have reached new heights with this one. The characters are beautifully illustrated. The colours are as bright as the reefs around our islands. And that music. I can’t even count the number of times I held my hand to my heart, urging it not to explode with pride.

Yes, Moana is a product of corporate interests. Yes, she was produced and directed by Palagi. But, despite all that, I will dare to say that this film is good for us.

Moana subverts the Disney formula in important ways. Having a young woman from the Pacific Islands as the protagonist is in itself a challenge to the status quo. But, more importantly, Moana is a story of Polynesian female empowerment.

For one thing, she’s the first Disney female young adult lead to have no love interest. She’s not even interested in a love interest. It’s her love for her family and people that drives her. And, although her father and Māui are central to the film’s plot, the most pivotal influence for her is actually her grandmother. Not only that, but Moana is the anointed successor to her father. There’s no questioning her legitimacy and destiny to be the next leader of her people.

White feminists have already begun claiming the revolutionary Moana as “the most unapologetically feminist” Disney princess yet — seeing her as an important counterpoint to Hillary Clinton’s recent loss.

But I’m so not here for Moana to be turned into a tissue box for white tears. They have Elsa. Moana is Polynesian, and her story belongs to us.

Like everyone I know, I have nieces. And the thought of them looking up to a young woman like Moana excites me. My hope is that having a role model who looks like them will light within them a fire of self-worth that doesn’t need to be measured by white standards.

Moana’s character lives at a time when Polynesian voyaging is on a bit of a hiatus. No one really knows why our ancestors stopped and suddenly started again. But who’s to say it wasn’t a teenage girl with big curly hair, an adventurous spirit and excellent vocal range who was behind the rebirth of our peoples’ great voyages of exploration?

Yes, Moana is a children’s movie, but it’s also a commentary on the many challenges we grownups face today. Her mission to find Māui, and make him return the heart of Te Fiti, is clearly a metaphor for our battle against climate change.

And, speaking of Māui, demigod of controversy, he’s important to this story because he isn’t the story. Moana is. He’s been the most divisive character of all, but his goofball antics and vanity only enhances Moana’s mana (and, to that end, my prior criticisms have had the wind mostly knocked out of its sails).

By showcasing the mana of our Polynesian women, Moana comes at a vital time. Levels of violence against women in Samoa and Tonga — the two examples I’m most familiar with — are at epidemic levels.

Moana runs counter to the seemingly entrenched patriarchy (installed post-colonisation) that has many of our islands in a vice-like grip. She harks back to a time when women were not merely the possession of their husbands, but were exalted as the gatekeepers of our culture and traditions, and respected as leaders, peacemakers and the initiator of life.

This is an often-forgotten feature of authentic Polynesian culture.

And, aside from the exploitation thing, it’s this idea of authenticity that seems to have attracted the most controversy among Pacific people.

Authenticity can be a slippery term. In this case, it encourages people to see divisions. One of the most successful strategies of colonialism was to divide and conquer. Today, all our islands are arbitrarily divided along lines imposed by our former colonisers.

What needs to be central to all our decolonisation 2.0 efforts, is recognising that, to thrive as Pacific people, we need to revive these connections between all our islands, and all our people.

Moana is important because no one can claim her outright as Samoan, Tongan, Hawaiian or whatever — but we can all claim her. She represents the Sea of Islands that Epeli Hau’ofa dazzled and inspired us with. She is unifying.

So, despite the unnerving thought of the billions that are about to line the pockets of Disney executives, I’m comforted by the fact that there’s still a lot of good mixed in with the corporate bad.

Moana will empower a new generation of Pacific Island youth, women especially. It has already opened up important avenues of discussion around cultural preservation and appropriation — which, up until now, has been mostly the realm of academics. But for all of us to move forward, these discussions can’t be left inaccessible in academic journals, in language that doesn’t resonate with the public.

Moana lifts the discussions, places them on the big screen, and sets sail on a journey that’s going worldwide. The opportunities that this kind of reach provides is something that even academics shouldn’t dismiss quickly.

I feel comfortable riding Moana’s wave, because she makes space for us Pacific Islanders in global discussions. As adults, academics, activists, parents, aunts, uncles — we have the job now to reshape those spaces into something future Pacific generations will feel capable of claiming as their own.

Rather ironically, the hand that holds us down, in this case, may just hold the key to our own liberation.