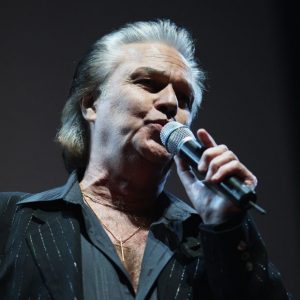 He’s still got the chops. At 67, John Rowles is still a chick magnet too.

The evidence was there once again at an outdoor concert in Mangere a fortnight or so ago.

And it wasn’t just the old girls who paid attention either. Even rangatahi who perhaps had never heard of him were pausing when the veteran balladeer started weaving his spell.

The crowd were spending the afternoon at a waterfront celebration near Auckland’s Mangere Bridge. A kind of re-enactment of the The Portage Crossing.

There were 65 paddlers who’d set off in their waka from Okahu Bay on the Waitemata Harbour and churned their way up the Tamaki Estuary. Next moves?  Hauling their vessels out on to the land, easing them back into the water a few hundred metres away when they reached the Manukau Harbour, hopping on board again, and then battling to the finish line.

They were doing pretty much what the original Tainui waka did, with Hoturoa in charge, maybe 800 years ago, on the way, give or take the odd detour, to Kawhia. Not a bad feat to commemorate.

Thousands of people were on hand this time to welcome the paddlers, while the bands played on. House of Shem. Sid Diamond. Moana and the Tribe.

And then it was the turn of JR, the Silver Fox, the 2015 version of the Kawerau teenager who, 50 years ago, set off on the musical career that made him a star here and overseas – especially in Hawaii and Australia.

But this was the day for his Mangere fans to embrace the JR vibes. Warming to the strains of 2001: Space Odyssey. Then to his version of the Elvis classic CC Rider. Next the huge hits – Cheryl Moana Marie, Tania and If I Only Had Time.

The old birds in the audience edged forward. Soaking up the sounds and the memories.

Some may say he’s 50 years past his prime, but JR is still a consummate performer, still up there among the best-ever of our Maori entertainers.

And still got the chops.