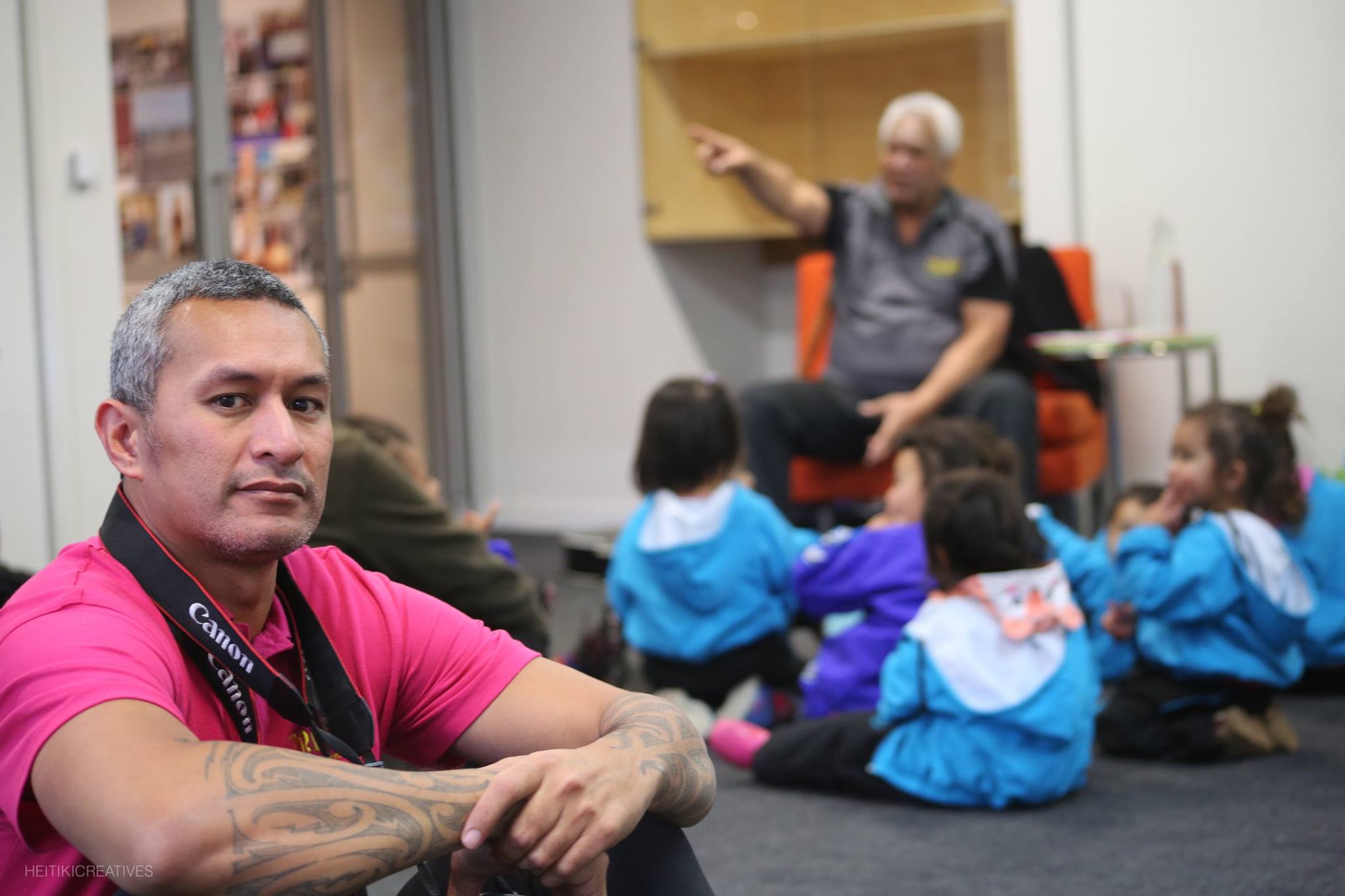 Siena Yates, a reo-beginner, has been talking to some of the winners from last year’s Ngā Tohu Reo awards run by Te Taura Whiri i te Reo Māori (the Māori Language Commission).

Here she is with Lee Timutimu (Ngāi Te Rangi, Ngāti Awa, Tūhoe, Ngāti Porou) about the importance of telling Māori stories in Māori.

As a kid, Lee Timutimu used to ride the bus for nearly three hours every morning just to get to school — all because his whānau wanted him to learn his reo.

These days, some kids are getting up at the break of dawn to spend two hours on the train and then walk for miles just to attend one of his reo events.

Lee and his wife Hollie Tawhiao started Te Reo Wainene o Tua in 2010. It’s a free reo Māori storytelling event where people like Stacey and Scotty Morrison, Joe Harawira, and Mātai Smith, share the oral stories of Māori culture, acting them out for a room full of rapt rangatahi.

It was, and perhaps still is, the only event of its kind — and it provides one of the few opportunities available where Māori-speaking kids can feel at home in a public space like their local library.

I wish there’d been something like this around when I was a kid. I know it would’ve made me more likely to interact with my culture and reo, because stories are what I’ve always lived for. And, for many kids, stories are a gateway to greater understanding — even Harry Potter can teach you something about racism.

When I was in school, I think the only Māori story we were taught was Māui snaring the sun and fishing up the whenua. But it was taught with a sense of obligation and much eye-rolling. I also distinctly remember some of the kids laughing at how dumb we Māori must be to believe that nonsense, as if it was meant as a history lesson.

Many years later, I’m painfully aware of how society taught us to shun our own culture. So it’s reassuring to think of a whole new generation being taught not only to embrace our stories, but also to have pride in them. And to do so in a way that puts te ao Māori and te reo Māori front and centre.

Lee knows how important it is to have that connection to the culture and language.

He was raised in Whakatāne by his mum, Dianne Harawira, and her parents, Mark and Mate Harawira. And although his mum wasn’t a speaker, his grandparents were, as were many other members of the extended whānau.

His dad, Fred Timutimu, was so determined to make sure that Lee learned te reo Māori that he insisted on him going to the only bilingual school in the region, Rūātoki Bilingual School (now known as Te Wharekura o Rūātoki).

Even though it was a two-and-a-half to three-hour bus trip, one way, from Whakatāne.

“It was all about the reo,” says Lee.

He got up to a good level of fluency, too, but when he hit high school, he was sent to St Stephen’s School, a Māori boys’ boarding school in the Bombay Hills — “and it just went downhill from there.”

Lee wasn’t able to pick the reo back up until his first child was born 15 years ago. He now has four children. His eldest two, Poutiriao Pihama (15) and Pureora Timutimu-Pihama (14), have been through both mainstream and full immersion schooling (at Puna Reo and Hoani Waititi). And the younger two, Cael Timutimu (7) and Oisin Tawhiao (2), are both in mainstream education.

Lee’s own reo is still a work in progress. He isn’t a fluent speaker, and even though his reo journey has been up and down, the reo is still an integral part of his life.

“It’s a part of who I am, and that goes for my family and children as well,” he says. “I already know that one day I’ll return to being a reo speaker. It’s just a matter of time, and things like Te Reo Wainene o Tua keep me connected to that world even though I still feel completely inadequate in terms of my reo.

“That’s been kind of a challenge for me personally, but I’ve managed to keep going because I know what we’re doing with our mahi is so very important and there’s a demand for it.” 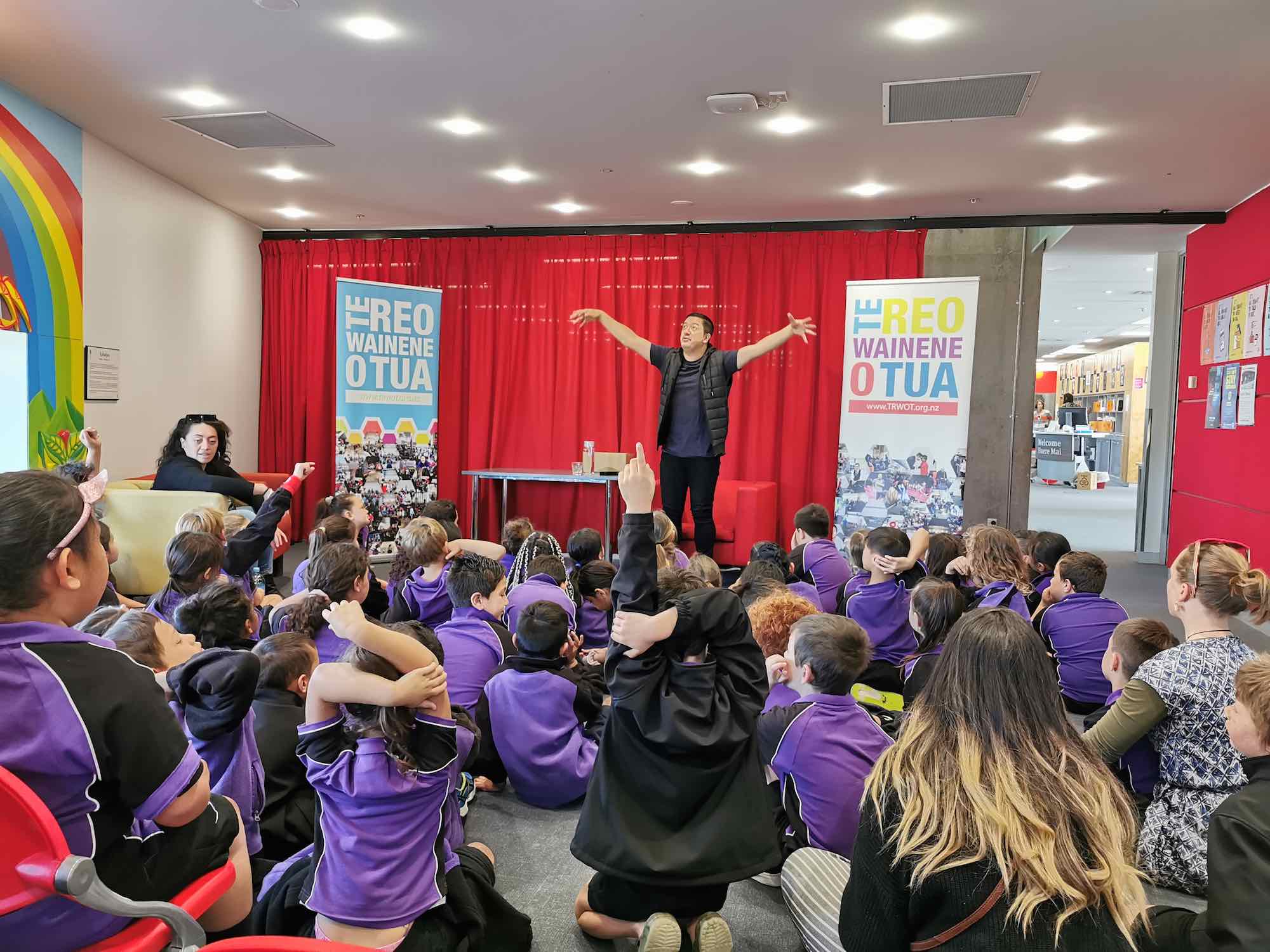 In a world where technology is taking over and oral traditions are at risk of dying with our kaumātua, Lee, with the help of a few famous friends, has made it his mission to keep Māori storytelling alive.

“Ours is an oral tradition, and that’s important because it’s not only how we share stories but how we transfer and transmit knowledge. I didn’t see anything like this around, in terms of a collective of people just moving around the country reviving the oral traditions and revitalising these stories that are really important to us, so I just thought, ‘Oh well, that’s what we’ll do’.”

Using famous faces and voices offers a level of connection and excitement for the children — a way to lure them away from devices and online content.

“It’s a different dynamic when you’re able to connect and relate, and that’s why our kids can really connect if our storytellers are doing voice intonations and doing all the actions, singing songs, or swinging a taiaha around — you just don’t get that with digital formats.”

For Lee, the “golden moments” are when the audience starts to connect “because what they’re hearing is a story about them, their ancestors, and the trials and tribulations of our people and their tūpuna”.

One moment which has really stuck with him happened just the second or third year of the programme, at the National Library in Wellington — “a big, very serious, very formal place with heaps of important books and not a lot happening in terms of kids — and certainly not reo-speaking kids.”

Some of the kids had travelled all the way in from Ōtaki. Afterwards, Lee heard from one of the kaiako who was also a parent of one of the students. Her son asked her why everyone was speaking Māori and she explained the kaupapa behind the event, telling him: “This is for you.”

“It was almost like he was confused because people were speaking Māori, but that wasn’t the norm in a public space. Like it was the first time that he’d been able to go out in the big city with his community and still be able to converse in te reo Māori,” says Lee.

“That’s stuck with me all these years. It really affirmed to me that our mahi is normalising te reo in public spaces.”

On top of that, the fact that the events keep children fully engaged for a whole hour “without being hōhā” speaks volumes.

”That just shows that our storytellers resonate and connect at a deeper level. Firstly, because they look like them. Secondly, because they sound like them. And also, they might not have heard the stories before, but they can sense something within those stories — that they’re about them.”

As demand continues to increase each year, the team is looking to include more bilingual storytelling “to reach more people and make it feel more accessible”. Eventually, Lee hopes to take the event online with live streaming.

“I think that’s important, just in terms of providing another way for our people to be able to engage, because at the end of the day, we want as many people as possible to benefit from this kaupapa.”

That makes sense. Lee spent nearly 20 years working in IT and launched the Arataki app in 2017, a new kind of storytelling platform which is activated by the user’s proximity to historical sites.

Lee is based in Hamilton now, where he’s the entrepreneur-in-residence at Ahikōmako, the Māori centre of innovation excellence at Te Wānanga o Aotearoa. He’s also an alumnus of the Kōkiri Māori Business accelerator programme and co-founder of Ko Maui Hangarau, which aims to inspire rangatahi into tech and innovation entrepreneurship.

“All of these things interconnect. They’re things I’m really passionate about and strongly believe in — supporting our kids of all ages, providing them with inspiration, tautoko. That’s basically what I do.

“It keeps me busy, but at least I’m busy doing things that I love to do. This mahi really rewards me and fulfils my spirit.”

Siena Yates (Te Rarawa, Te Aupouri, and Ngāti Kuri) is an Auckland-based journalist, formerly with Stuff and the New Zealand Herald, and now with Woman magazine. She was born in Morrinsville and grew up in Te Puke in the Bay of Plenty. 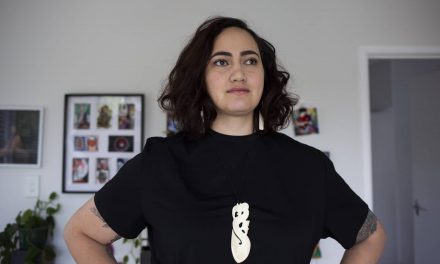