The centre is where we belong 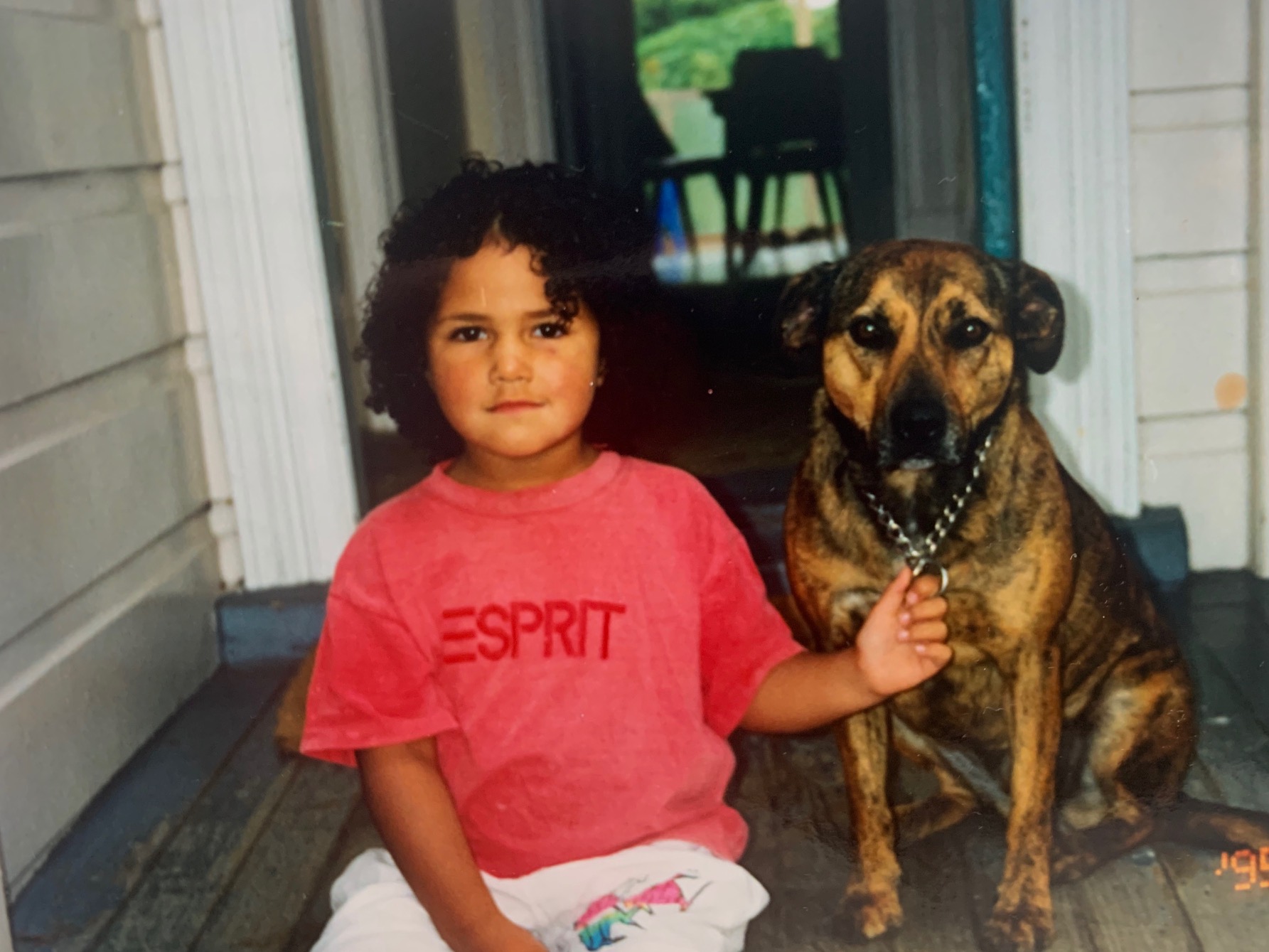 Litia and her dog Tammy on the front steps of her Grey Lynn home in 1996.

Despite what some of its newer residents might think, Ponsonby, Grey Lynn and its neighbouring inner-city suburbs were once brown spaces, writes Litia Tuiburelevu. She grew up in the area and still longs for the community that once was.

Early last year, I moved back to Grey Lynn. I’d spent my childhood there as a bona-fide daughter of Auckland’s inner-city before intense gentrification set in. Until I was 13, Mum and I had lived happily in a modest villa on Williamson Ave that was worth nothing but meant everything.

But my return was tainted by an unwavering sense of imposter syndrome. I got whakamā when my old friends, whose brown families have held it down since the 1960s, asked me if I’d “legit moved back”. I’d say: “Nah, I’m just flatting now . . .”

I realised my only ticket back into the area was to line some landlord’s pocket with 40 percent of my income and take one of four bedrooms in a rundown flat on Sussex St (his 12th property, FYI). The flat’s only redeeming feature was that it’s less than 100 metres from my childhood home. I half-joked to my flatmates that “we could’ve stayed there if Grandma didn’t sell it lol”.

It’s bittersweet being so tantalisingly close to something that was once yours. We loved our house, but it was in original condition and falling to pieces and we didn’t have the $100k to make it liveable. So, in 2007, it was sold, like most homes in the area, as an “inner city do-up with lots of potential!”. I’m not capitalism’s biggest fan but, if I could, I’d milk it for enough money to buy that house back and absolve my guilt as a Central Auckland sellout.

My sentimentality isn’t just for our humble whare but a longing for a community that once was. Back in the 1960s and ‘70s, Ponsonby, Grey Lynn and its neighbouring suburbs were brown spaces. 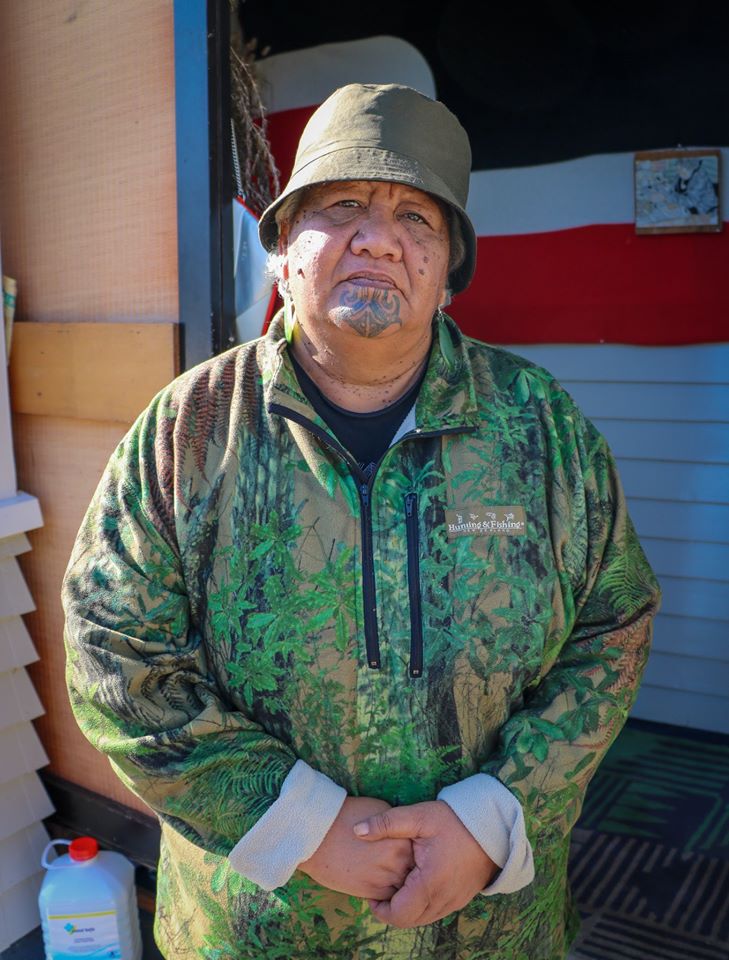 This is why I was so disheartened when I read about Rose Greaves on Vermont Street being on the receiving end of ongoing racial abuse and a vile letter claiming she’s an “embarrassment” to Ponsonby. My kneejerk reaction was to tweet “Make Ponsonby Brown Again”, in a joking attempt at solidarity that might’ve rubbed off as segregationist to someone oblivious to the area’s history. Realising a 21-character post was a poor means to approach such a layered issue, I started writing this instead.

That abusive letter to Rose, with its thinly veiled racism, read as gentrified nonsense. Not simply for its lack of humanity, but for its audacity in telling a Māori woman that she doesn’t belong. On Māori land.

But, while I was disappointed, I wasn’t surprised. A racist undercurrent has always flowed through these now-affluent suburbs — and any brown person living there will tell you as much. Racism rears its ugly head in many ways, often snaking itself into life’s everyday moments when you exist as the “other” in a predominantly white space.

It’s when shop assistants make a point of following you around their store as if, like, brown people can’t afford a Deadly Ponies handbag, too.

Or when brown men walk down Jervois Road to the side-eyes of onlookers, or worse, when others deliberately cross the street to avoid them.

It’s when you’re one of only three brown kids at Ponsonby Primary and some white girls ask why your skin is “so dirty” and then tell you that you can’t play with them anymore.

It’s residents complaining about gang members moving into townhouses on Richmond Road, unaware that their Pilates studio is on the King Cobras’ property portfolio.

It’s the Three Brother’s Bar being shut down and the owner being told “Ponsonby is not a place for brown people”.

And it’s when a kuia minding her own business is vilified for speaking te reo in her own front yard.

All these occurrences, which I call Close Encounters of the Racist Kind, expose a hostility to those whose backs the suburb was built on.

Ponsonby, Grey Lynn and its neighbouring suburbs have a brown legacy — a legacy that is constantly undermined by the predominantly white residents who fill those areas today. Central Auckland rapper Diggy Dupé says it best with his smooth bar:

there’s two sides to my suburb

the hipster barista and the kid from the gutter. 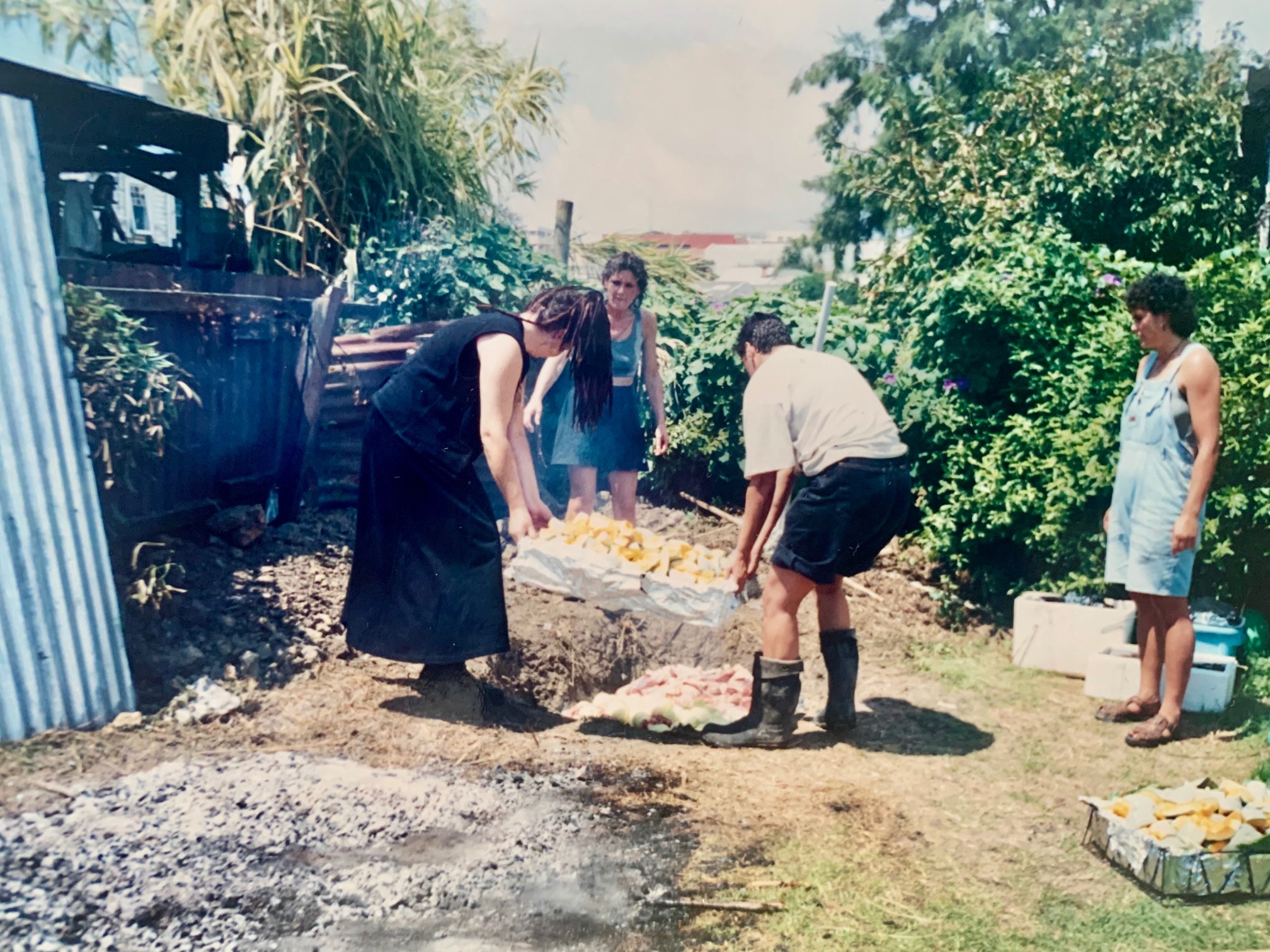 Preparing a lovo, or umu, in the back garden, in 1990. Litia’s mother is second from left.

Each new multi-storey apartment complex and commercial development erases more of the community’s history. Historical amnesia is gentrification’s most insidious by-product, allowing us to ignore how racism and resistance is so deeply woven into the area’s social fabric.

These affluent inner-city ‘burbs were, once upon a time, “Little Polynesia”, populated by freshly urbanised Māori and newly immigrated Pacific Island families. Their destination was labelled as “an inner city slum”, housing conditions were poor, and many were forced to squeeze large families into decaying three-bedroom villas.

But, like always, our people made the best of it and turned the city’s nucleus into a thriving Nesian community.

This history is made visible in Albert Wendt’s illuminating documentary New Streets — Auckland Fa’a Samoa (1982) about Sāmoan families in the big smoke. Set predominantly in Grey Lynn, the film is a goldmine of archival footage of a pre-gentrified past.

It was both heartwarming and reaffirming to watch hundreds of Pacific Islanders chilling in Grey Lynn Park, the young ones playing football and kilikiti while their mamas and aunties danced and sang under the trees. Life was hard but it was also beautiful.

But wherever and whenever brown people exist, racism shows up uninvited, ready to disrupt, oppress and displace. 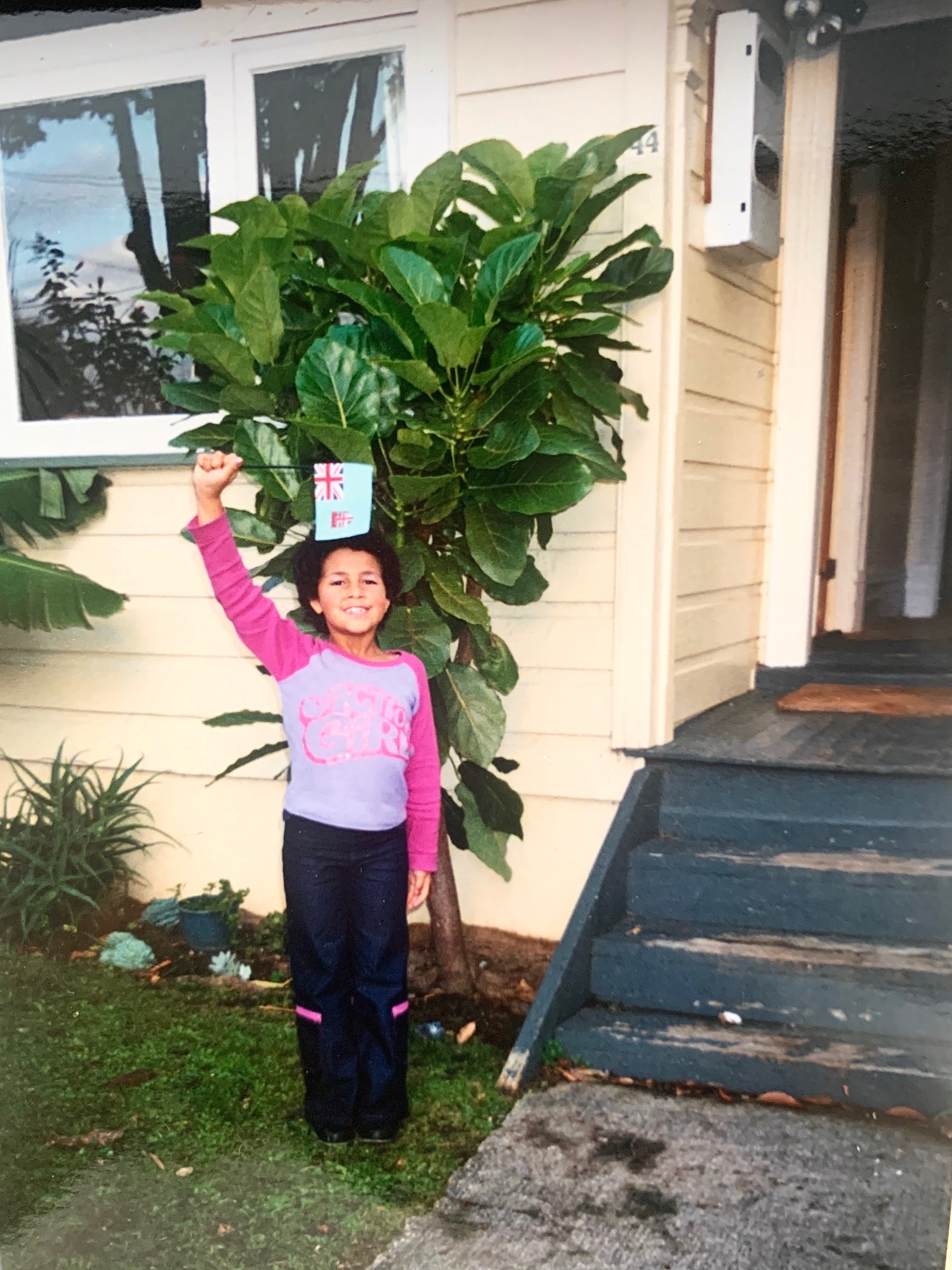 With New Zealand’s economic downturn in the 1970s, the media portrayed Pasifika peoples as a threat to the economy. That was evident in the National Party’s racist media campaigns that fuelled the Muldoon era immigration scare. Our families were Dawn Raided, racially abused and, eventually, pushed out.

The displacement of Māori and Pasifika from the area came largely under the neutral slogan of “urban development”. Worldwide, urban renewal has usually meant brown removal.

The government’s neoliberal agenda, Auckland City Council’s “urban upgrade” plan, and the hostility of inner-city landlords towards their brown tenants, formed an unholy trifecta that spiked rates and rental prices and made housing unaffordable.

Many Pākehā families wanted to move back into the inner-city, and property managers accommodated that by making a point of renting or selling to individuals of a certain “character”. Aware of this racist behaviour, young inner-city Pasifika and Māori formed the Polynesian Panther Party, a revolutionary movement fighting racism and political injustice.

When Pākehā landlords sent private security guards to physically remove families from their crumbling Ponsonby/Grey Lynn/Freemans Bay rentals, the Panthers barricaded themselves inside, resisting the discriminatory treatment these families were receiving.

For the Pasifika and Māori families who owned their homes, many were given appallingly low offers to lock up and leave. Many took the deal, believing a better life was possible in the greener pastures of Māngere and Waitakere.

When I look at the Ponsonby of today, it’s hard not to think that its last bastion of diversity is the Foodcourt. A casual stroll down Great North Road would make anyone think the area is rapidly metamorphosing into another North Shore. But, despite the efforts of some property developers to achieve that, I’m also reminded that our people are still here, resisting gentrification’s grip, as the true originals of the inner-city.

You can hear this truth in the angelic harmonies of the United Church of Tonga’s choir reverberating down Crummer Road on a Sunday morning. The vans of their congregations line the footpath with not a single care given. You see it in the kids walking in their kiekie and ta’ovalas to the bakery to buy a French stick with the cream, blissfully ignoring side-eyes from café-goers next door.

You see it again when you pass a house with a mink blanket and the tiger print hanging over the front porch (if you know, you know), and in the abundant koko Sāmoa and taro sold at the Grey Lynn Superette.

And you also see it in a stall of beautiful taonga on Vermont Street, manned by a proud Māori woman who remains unbothered by the attempts of some anonymous neighbour to push her out.

Aucklanders like to mythologise that Māori and Pasifika people are “out there”, existing in distant spaces away from the bourgeois inner-city. And while it’s true that many of our communities are largely divorced from their central roots, the reality is we also exist here, at the centre, where we belong.

Litia Tuiburelevu (Fijian, Tongan, Pākehā) was born and raised in Auckland. She graduated in 2018 with a BA/LLB (Hons) and is a professional teaching fellow at the University of Auckland’s Faculty of Law, overseeing the Pacific law students’ academic programme. She teaches an elective course titled “Pacific Peoples and the Law: Critical Perspectives” and is also interested in film and photography. 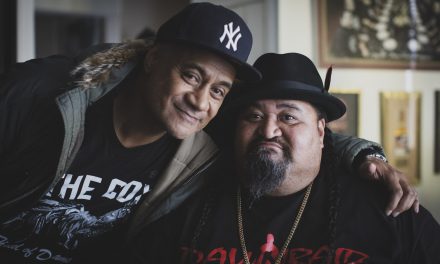 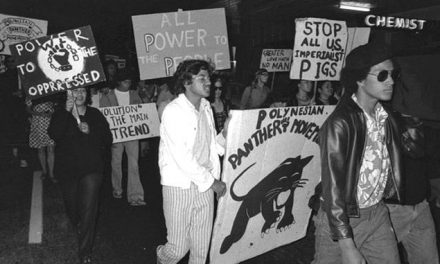 The Terror of the Dawn Raids 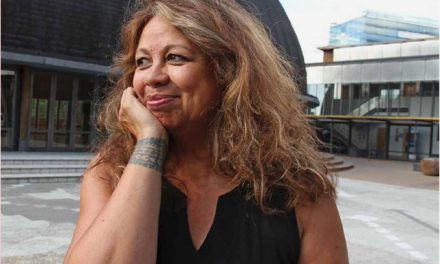