We’re all in this together? Yeah, nah. 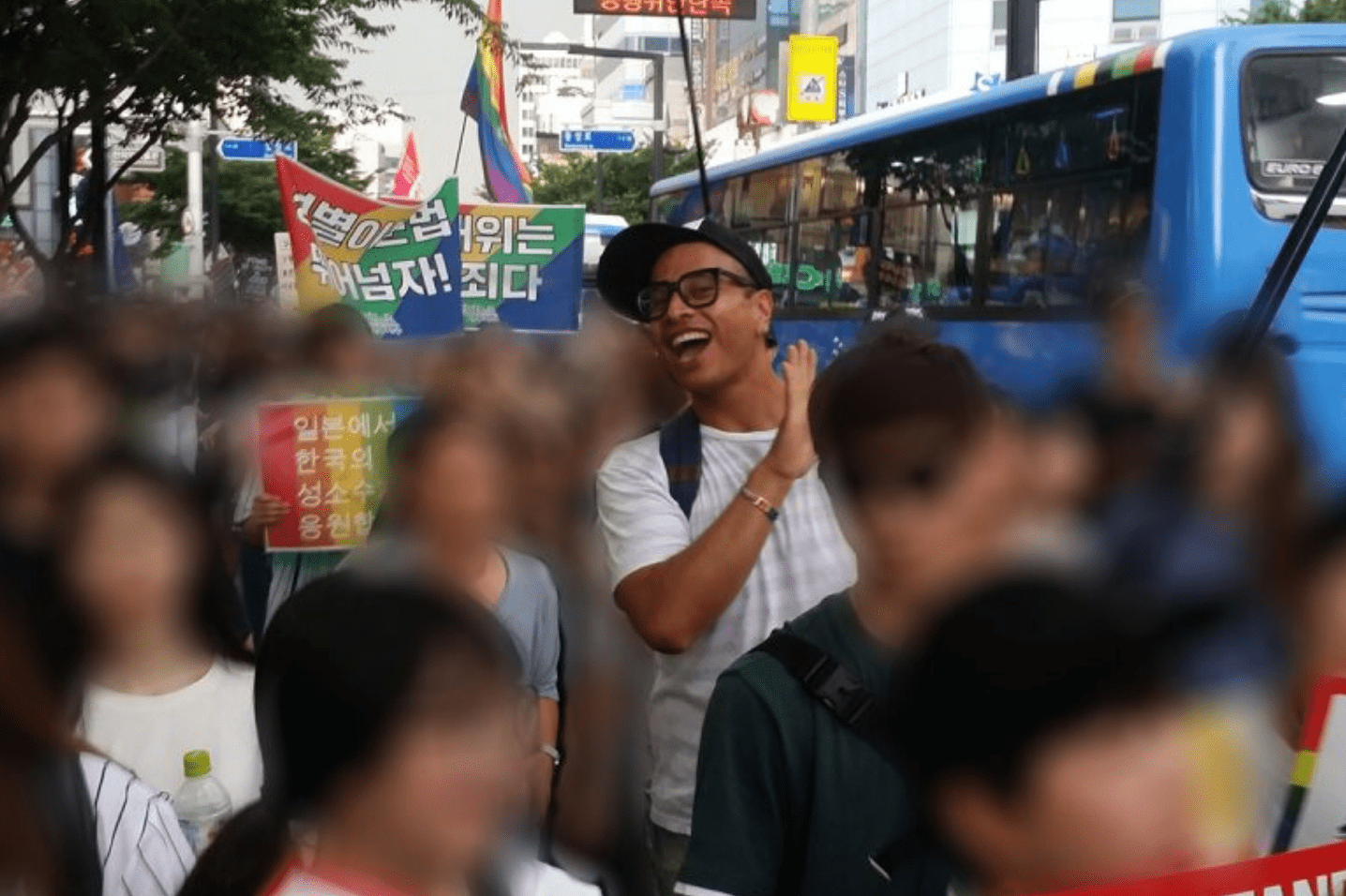 Patrick Thomsen pictured at the Daegu Queer Culture Festival in South Korea, where he lived for nine years.

It’s kind of hard to put into words what it feels like to have spent 12 months back in Aotearoa after more than a decade of living abroad. What comes to mind is the adage that as much as things change, they also stay the same.

In 2008, when I took up a teaching job in South Korea, the global financial crisis was about to hit, Helen Clark was still prime minister, house prices hadn’t begun rocketing toward the stratosphere, and the Auckland motorways weren’t even connected. State Highway 20 used to end at Roscommon Road in Wiri. Now, on any given day, impatient wannabe-race-car-drivers zip by in an endless line, like fire ants marching along a massive flyover. Hurriedly connecting with our country’s main arterial route, State Highway 1.

But I’ve returned to a country that’s been severely tested over the past 12 months.

I came back at the beginning of March last year, and having lived through the trauma that was the 2016 Trump presidential victory in the United States, I was excited to be back in my “normal”. I felt like New Zealand would give me a reprieve from the craziness that seemed to be sweeping everywhere else.

Living in South Korea as a Sāmoan and clearly brown-skinned person, I’d definitely experienced xenophobic behaviour. But also, annoyingly, I’d felt the inherent racism that exists in the expat community. Essentially, I’d been dealing with being the “different” one wherever I went — because, let’s face it, outside of South Auckland, tell me of another city in the world beyond the Pacific where Sāmoans are considered a regular part of the city’s furniture?

Not many, if any.

My time away has taught me many things, but one of my most important lessons is that racism is an insidious global system. It’s institutional, systemic, and about power. Race may not have a biological reality, but it sure does have uneven and violent material outcomes for those on the lower rungs.

Race as a system of power is about domination. It delivers white-over-colour ascendancy. It’s implicated in the neoliberal exploitation of workers. It’s entangled in the subjugation of non-white women as well as sexually and gender-diverse Black Indigenous People of Colour (BIPOC). It fuels colonialism by forming the default setting in the building blocks of the modern nation state.

New Zealand is a country whose default setting is still unflinchingly white.

To challenge the default setting is to invite blowback and even vitriolic resistance from people who enjoy the comfort of the default. Those of us who sit outside the default, the “others”, are all too familiar with the narratives that deny us our nationhood, our citizenship, and the right to belong to this country.

At the other end of the spectrum of the “We’re not as bad as Australia, get out of this country if you don’t like it here” response, are the lives of 51 Muslims brutally taken and basically forgotten.

Some of you can’t see the connection, but these behaviours exist on the same line that many so lovingly toy with on social media.

I’m acutely aware of the fact that I’m writing this piece during our country’s first ever nationwide lockdown thanks to Covid-19. And that some people may find it distracting to talk about race in a time of national emergency, which we’ve been reminded, again and again, requires total unity for us to overcome.

But don’t be fooled by Jacinda’s magic, considerable though it is. It’s precisely in these moments of panic that a country’s inequities are most visible.

Asians and Asian New Zealanders were the first to cop the abuse. Spat at in the streets, obscenities thrown at them while they were minding their own business on public transport, and Facebook persecutions and Twitter-burnings at the stake, fuelled by racist comments from brainless politicians.

Then they turned to us. The Pasifika festival got cancelled at the very last minute, followed by Polyfest, while St Patrick’s Day parades were allowed to go on, as were any number of rural field days and music festivals — the latter patronised by people not particularly renowned for their personal hygiene.

Their need to go ahead was justified by Pākehā organisers who felt it would be a shame to waste everyone’s hard work. Our Pacific leaders, on the other hand, felt the national and community burden to err with caution and make that sacrifice.

Some would say that it was a different context. And you’d be right. The context is that more Pākehā New Zealanders attend those events than do ours.

One thing New Zealanders need to get into their heads is that racism has many intersecting and complex forms. It’s not just about your racist uncle calling us useless bungas and Heather-feather-something calling us leeches.

Racism is a structuring force, that continues to colour our assumptions over who should be in leadership, which stores should be allowed to open in a lockdown, and what motivates our appeals to a national spirit which flattens us as “all New Zealanders”. At the same time, it gaslights the experiences of specific communities that sit in the margins and intersections — Māori, Pacific, Muslim, Asian, queer, disabled. People who are still denied access to meaningful representation and power.

And now, in the time of Covid-19, racism also colours our predictably inequitable responses to major health and wellbeing crises.

The fact that so many Pākehā on social media are criticising the very modest — emphasis on “modest” — support offered to Māori to prepare for the effects of this epidemic, shows you exactly how racist our default setting is.

Māori are likely to suffer worse effects than mainstream New Zealand after all of this is said and done. Rural Māori in particular are severely under-resourced with health services. They’re more susceptible to contracting the virus through community transmission if they’re living, as many do, in multi-generational households. And they’re more likely to be in insecure, precarious forms of employment or have no jobs at all, which means their overall wellbeing will be severely affected.

This is what those tired pleas of reverse racism gloss over.

Our prime minister has done a fantastic job of showing empathy, clarity, kindness and grace in her leadership over this period. But, in some ways, her constant calls to remember that we’re all in this together does a severe disservice to those of us who’ve always been here, but rarely seem to be heard.

Inevitably, when a state of emergency is declared, state powers become expanded, and questions surface about how much of a police state we’re likely to become. Our government has responded by stating that our police will be asked to educate first and after three escalating steps, consider taking errant people on “a trip to our place”, presumably to think about their actions. Our police commissioner’s words, not mine.

I know that, for a lot of people in my community, this isn’t good enough. Especially as police now have the power to enter anyone’s house to check if they’re complying. We’re a community that lived through the trauma of the Dawn Raids, and continues to be under hyper-surveillance by a police system riddled with “unconscious bias”. Again, the police commissioner’s words, not mine.

The prime minister is clearly in a rush right now, so I get that these nuances may not be at the forefront of her mind. But we need assurances that she’s aware that these expanded state powers — a state whose default setting is white — is also an expansion of a violent settler-colonial state that has discarded and undermined the agency of Māori, Pacific, Asian, Muslim, queer and disabled peoples, time and time again.

This doesn’t stop with the government and its agencies. Ordinary New Zealanders can be agents of the settler-colonial state, too.

For example, The Warehouse is a low-cost supplier of grocery items, including baby formula, low-cost appliances like heaters, and low-cost clothing. These are all items that people from our communities aren’t likely to have the money to stockpile. But they’ll become more critical for their health and wellbeing as we head into winter.

So the fact that a petition was set up at lightning speed by New Zealanders of more means to shut The Warehouse down during the lockdown, was viciously classist and racist. I wonder if these were the same people calling for their favourite boutique bakeries to stay open, or queueing in Newmarket for Nespresso Pods. Or among those who lined up outside gun shops.

I’ve also been told about an incident (by someone who witnessed it first-hand) in which a woman from a wealthy suburb, upon hearing that limited panic-buying was going on in South Auckland — again, because many of our people don’t have the money to stockpile — travelled to a supermarket in Manurewa where I live, to avoid the empty shelves in Auckland’s privileged central suburbs.

She encountered brown men (who were probably houseless) with cups asking for some assistance from shoppers at the door. The lady dutifully reached into her purse . . . for her phone, and called the police. Reporting that she felt unsafe. In our neighbourhood shopping mall.

This is the audacious entitlement of the default racial setting.

I think, as a nation, we’re afraid of the word racism. We like to believe that we’re the “better” country next to our sorry neighbours across the ditch. I don’t think New Zealanders should be scared to use the word. We should bathe in its discomfort. Scratch as much as possible. Find out how deeply it goes.

By mapping its parameters, we can actually do something about it.

If New Zealand truly wants to be the changed country that some people proclaim it to be, it needs to get over its own tidy, carefully manicured self-image of being a racial utopia.

New Zealand hasn’t changed. It’s still as racist as ever. But I believe in its potential. I know one thing we have going for us, is that a great many people do want to get it. It’s why New Zealand Twitter is full of Pākehā with good intentions.

And now, having said all of that, to conclude, I want to acknowledge just how great it is to be home.

Seuta’afili Dr Patrick Thomsen was born and raised in South Auckland and is from the village of Vaimoso in Sāmoa. He is a lecturer in Pacific Studies at the University of Auckland, having received his PhD from the University of Washington – Seattle, Jackson School of International Studies. He was also the first Sāmoan to receive his MA in international studies from Seoul National University in South Korea, where he lived for nine years.

New Zealand universities are lucky to have us

Will it end with us?

The grind of racism