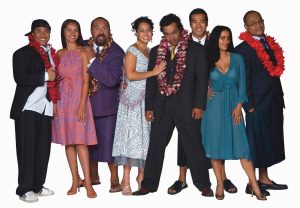 We’re streets ahead of the rest of the world when it comes to diversity on screen and stage, writes the award-winning playwright Victor Rodger. But that’s not where it counts the most.

Diversity. It’s really just a euphemism that some cultural spin-doctor fabricated so people had an alternative to saying “not white”. That’s what people really mean when they use the term diversity. They’re talking about people who are not white, or not straight, or not in possession of a penis.

Diversity was the word that sprang forth from Matt Damon’s lips this week in the reality TV show Project Greenlight, which gives first-time filmmakers the chance to make a movie. He used the D-word while casually schooling Effie Brown, an African American film producer (and the lone non-Palagi in the room) on the ins and outs of diversity in the film industry. And he did it in that annoyingly casual way that educated, entitled and ostensibly liberal people sometimes have. (Well, brother did go to Harvard so I guess he knows what he’s talking about, right?)

Brown had suggested, during a discussion of a project in which the only black character is a prostitute who “gets hit by her white pimp”, that some care should be taken in choosing the director for the film. Damon responded: “When we’re talking about diversity you do it in the casting of the film, not in the casting of the show.”

In other words, diversity doesn’t matter behind the camera. (Which is, of course, bullshit.)

Diversity has been on a lot of other people’s lips, too — and for better reasons.

On Broadway, Lin-Manuel Miranda’s smash hit Hamilton has challenged the status quo by featuring black and Hispanic actors playing white historical figures  — in direct contrast to Trevor Nunn’s controversial all-white casting of his War of the Roses trilogy in the UK.

The Hollywood trade publications were all over diversity during the past TV season in the US, with Shonda Rhimes leading the pack as the black, female creator of three hit shows, including two with “diverse” leads (Viola Davis in How to Get Away with Murder and Kerry Washington in Scandal).

Then there was the ratings behemoth Empire (co-created by African American Lee Daniels), as well as the Afro-centric comedy Black-ish and the Taiwanese-led Fresh Off The Boat. Not to mention the award-winning Hispanic comedy Jane the Virgin.

One of the world’s most successful film franchises The Fast and the Furious literally became a poster child for diversity when billboards for its latest incarnation featured precisely one Caucasian (the late Paul Walker) among a cast that included a mixed race leading man (Vin Diesel), two African Americans (Tyrese Gibson and Ludracis), one Latina (Michelle Rodrigeuz), an Israeli (Gael Godot), and even a Samoan (malo, Dwayne Johnson).

This past week The Hollywood Reporter pointed out that the films atop the box office for the past five weeks were all “black” films — Straight Outta Compton, which was number one for three weeks, the faith-based War Room and the thriller The Perfect Guy.

Here in New Zealand six of our top 10 box office hits of all time are “diverse” by nature, being Maori and Pacific films — the two Sione’s Weddings, Once Were Warriors and its sequel What Becomes of the Broken Hearted, plus Boy and Whale Rider. (Although only Boy and Once Were Warriors had “diverse” directors.)

The Dark Horse (starring Cliff Curtis), The Dead Lands (directed by Toa Fraser, of Fijian descent), and What We Do In The Shadows (directors Taika Waititi and Jemaine Clement) are surely to join that list.

In many ways, Aotearoa has been streets ahead internationally when it’s come to diversity. Our comparatively young and multicultural population is often reflected on-screen (although behind the cameras is another story).

Even good old Shortland Street (a show I once wrote for) has featured multiple mixed race couples without making a song and dance about it, unlike its American counterparts. Not to mention a Maori CEO (Calvin Tuteao’s Victor Kahu), a Samoan in charge of the emergency department (Robbie Magasiva’s Maxwell Avia) and a Samoan head of nursing (Teuila Blakely’s Vasa Levi). These characters may have their real-life counterparts, but if they do, they’re certainly a minority.

But let’s get real. For all this talk of diversity, both here and abroad, the one place diversity doesn’t really exist — and this is crucial — is where it really counts: at the top of the management pyramid where final decisions are made, projects are green-lit and teams are put together (like Matt Damon on Project Greenlight).

Several recent articles have decried the lack of women on boards. Fair call. But the same certainly applies to minorities.

And while many people can agree that the white patriarchy has had its day, what exactly is being done to challenge it?

Playmarket, the agency that represents New Zealand playwrights, including me, recently announced something called the Inclusion Pledge, supported by Actor’s Equity and the New Zealand Writer’s Guild.

The pledge “acknowledges that we all have a role to play in creating stories that reflect the diversity of the world in which we live, and in encouraging performers from all communities. Playwrights will pledge that they will aim for inclusive writing and will include a statement alongside the character descriptions in their work to encourage diverse casting.”

In a similar vein, Creative New Zealand, the government arts funding body, has announced a Diversity Fund to “increase arts attendance and participation by Māori, Pacific and Asian communities in the Auckland Region.”

Great. But what does it really mean? The former is non-binding and the latter is simply pitching three minority groups against each other in a creative arts version of The Hunger Games. (And the lumping of all Asian cultures into one tidy sub-group is, arguably, far from “diverse”.)

Besides, both fail to acknowledge something I believe — that the so-called “diverse” work is, in fact, the new mainstream.

It’s very clear to me that the “diverse” practitioners — Maori and Pacific in particular — are the ones who are making the greatest impact on the theatre scene in New Zealand as more and more of us take charge of how we are represented. The recent triumphant season of The White Guitar, a play about a Samoan immigrant family in Christchurch, produced by the Wellington-based Pacific theatre group, The Conch, is but one example.

It is equally clear to me that nothing will really change for those of us who provide diversity in the industry until more of us are at the top of the food chain; until the racial make-up of the nation’s theatre, film and television top dogs and the boards they serve are more reflective of society as a whole.

You only have to look at the last time a Maori or Pacific Islander directed a main stage show for one of the main theatre companies. (Oh, right. That would be never.) Or the number of times that one of the big guns of New Zealand theatre has programmed a Maori or Pacific work. (Again, virtually nada.)

The alternative has been for those works to be produced and staged independently.

But I look forward to the day when the shoulders that aren’t getting tapped start to get tapped. And when those amazingly diverse plays from both here and overseas start to find their way on to our main stages.

When that glorious day comes, I’m going to send Matt Damon an invitation to opening night.