Māori music — and the red carpet 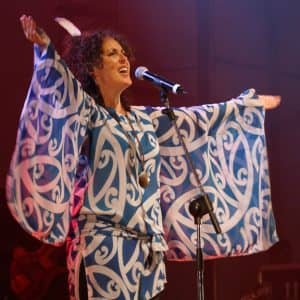 It’s that time of year again. The announcement is made, the red carpet hauled out of storage, TV celebrities scour designer shops for the perfect outfits, and captains of industry compile their VIP guest list.

Yes, it’s the New Zealand Music Awards — a time to compare apples with pears, rock with pop, and hype with authenticity. It’s a night that celebrates commercial success and artistic merit. It’s a place where artists can charm and bedazzle the multitudes with their music and acceptance speech.

Last century, I accepted Most Promising Female Artist with possibly the shortest acceptance speech in the history of mankind.

That’s because the awards were once held in a hotel ballroom so small it was way too easy to spy Neil Finn, Dave Dobbyn and the Exponents among the record company and radio executives. The only other Māori musicians in the room were Herbs. All a bit daunting for a freshie like me.

That same year, the Chills won Best Group. Last week, they released a new album. Last year, so did I. We should both be getting the Hello, I’m Still Here award.

Now the NZ Music Awards is a big, glitzy, sponsored affair complete with screaming teenage girls, limousines and live-to-air TV coverage. And there’ll be a fair bit of brown-in-town for the November 19 occasion, with Māori musicians in Six60, Trinity Roots, Whāia & the Māhician, as well as Stan Walker, Anika Moa, Benny Tipene, Ranea and more rocking up. My own band will up the Māori quota significantly. Our bilingual album RIMA is a finalist in two categories — Best Roots Album and Best Māori Album.

If we win, it will obviously be a long overdue acknowledgement of our artistic genius. And, if we don’t, the awards are rigged, the anonymous judges are all plonkers, and … you get the picture.

There is an art to perfecting The Noble Runner-Up look. That’s the one where you smile graciously as your name isn’t read out even while you’re screaming on the inside: “Nooooo! That’s mine, you rip-off bastards … ”

Events like this can prompt spasms of anxiety, which is why a lot of people get off their faces on the night. Popular bands sneak a nervous glance at the newest, latest thing on their tail. Other artists will have mixed feelings about turning up at all. OMG — what if the screaming teenagers spilling on to the red carpet suddenly go silent when you appear on it? What if you drink too much and end up abusing a radio programmer? What if you suddenly yell out: “Why are there more celebrity stars on stage than musicians?”

This time, I’ll be quaffing back the free wine and weighing up how much has changed since there wasn’t actually a red carpet. And I’ll be wondering how far Māori music has come.

One of the big winners at the 2015 Waiata Māori Music Awards was Six60. They’re up for Album and Single of the Year at this week’s awards.

“Is Six60 a Māori band?” I asked my son, Kimiora, who knows these things. He runs music events, manages a few young artists and has just directed my last music video. “Yep,” he replied decisively. “There’s three Māori in the band and they’re proudly Māori. So that makes them a Māori band.”

Good question. Different people have different ideas about that but we’d probably all agree that songs in te reo fit the bill. So how is Māori language music doing in 2015?

Well, back in 1987 when I released Kua Makona, Radio Ngāti Porou and Te Upoko O Te Ika were relative newbies — and the only two Māori stations in New Zealand. Now we have an iwi network of 21 stations, and, according to Radioscope, around 47 percent of the network’s music is local content.

One song that got a good bash on iwi radio was the Stan Walker-led collaboration Aotearoa. Sony Records reports that the song had over 5000 plays on New Zealand radio. Mind you, Radio Atiawa Toa FM accounted for nearly 600 of those plays.

That’s probably why my nieces and nephews know every single word, which they screamed at the top of their lungs as they pranced around the whānau bach last Christmas. I tried not to sulk at the lukewarm reaction I got for my own electronica masterpiece which was innovative enough to snaffle a place in an international songwriting contest.

Things are looking up though. Te Mangai Paho is instituting a compulsory quota for songs it funds on iwi stations. That means my next “different” song is guaranteed a certain number of spins alongside the usual reo, reggae, R&B and soul fare on iwi radio.

The Ngāti Whatua-owned “hip-hop and R&B station” Mai FM is something else. They played Aotearoa 42 times but, get this. It was an English version. Who knew there even was an English version? The station tested the Māori language track on its listeners and given the “lukewarm response”, ran with the English.

But what did Mai FM expect? Kids don’t grow up suddenly wanting wholegrain if all you do is feed them white bread. You introduce wholegrain into the diet and get them used to it.

There’s a need for radio broadcasters to gently massage their listeners’ ears with te reo Māori instead of giving them what they have always given them. But most non-iwi radio stations remain hostile to Māori language tracks — not that there is a data collection process in place to test any assumptions.

Unlike TMP, NZ On Air doesn’t fund commercial stations, so they can’t force Pākehā radio to play any local, let alone reo, music. I’d ask how come these stations get frequencies and licences then? Isn’t there a Treaty obligation somewhere? Given that their kaupapa is to promote all music made by New Zealanders, what’s NZ On Air’s cunning plan to promote New Zealand music that just happens to be in te reo?

Well, first it tried to make it easier for commercial radio to play our songs. It collated the best reo and kaupapa-driven songs, packaged them up nicely into the Iwi Hit Disc, and posted it out to every station. So all they had to do was pick and play.

Well, the last Māori language track to win Single of the Year at the NZ Music Awards was E I Po. That was in 1982. The last song to hit number one in this country was Poi E.

According to the figures I received, Port FM (Otago), Sun FM (Whakatane) and Peak FM (Raetihi) are the only non-iwi stations to playlist Aotearoa. It’s not known which version they spun. But I think it’s safe to say that, despite the fact that Māori language music covers rock, pop, reggae, hip-hop, easy listening, electronica — the works — New Zealand radio is a reo-free zone. Even the genial, star power of Stan Walker can’t shake them.

Maybe the question isn’t what is Māori music. It’s what is New Zealand music?

To me, New Zealand music is music created by artists who whakapapa to this land, whether they are Māori, Pākehā or Pasifika. It crosses all genre. It encompasses both languages and sometimes none at all. It includes songs that reference our stories, land and culture from Scribe to Don McGlashan, Trinity Roots, House of Shem, Maisey Rika to Ranea.

In 1991, my song AEIOU was white-listed from radio with one programmer declaring “we don’t play foreign language music.” Even a chorus in Māori was a bridge too far. I doubt Kotahitanga by Hinewehi Mohi did any better 10 years later, despite big sales offshore.

But in this digital age, artists have options. While the internet brings a whole new set of challenges, at least we can post videos, promote songs and sell albums online. And discover new music in other languages that we will never hear on local radio.

So, as the radio jocks and programmers work the room at the awards this week, they might spare a thought for the revolution they’ve never been a part of.

And, as you watch the awards on television, you might consider your own potential as a foot soldier. Whether you are a music fanatic, political activist, warrior for the reo or simply a patriot, you could expand your musical tastes. Why not walk the talk and buy a new NZ album, or three. Not all NZ (and reo) music is good but much is exceptional — and deserves to go gold.

Here’s to Louis Baker, Jakob and Waiora whose music has brought me so much pleasure this year.

And if I happen to bang into another curly-haired songstress named Lorde on awards night, I might propose that a Māori language song in the next Hunger Games could be the game-changer.

Mai FM was purchased by Mediaworks from management and Te Runanga o Ngāti Whatua in 2008. It broadcasts through a Māori-owned frequency, allocated to Ngāti Whatua.

You can check out Moana's latest music video for the song 'Not Alone' here: http://youtu.be/im9QTZE4SrY