The quickest of them all? Kayla Cullen 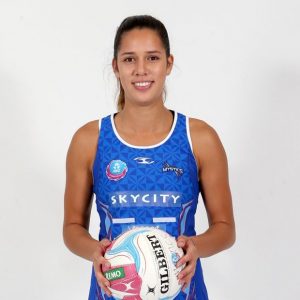 Over the next few months, 23-year-old Kayla Cullen has a shot, first of all, at winning the ANZ Championship with the SKYCITY Mystics netball team, and then a World Cup with the Silver Ferns. Her team-mates include Cat Latu, Maria Tutaia and Laura Langman, so around her there’s any amount of precision shooting, athleticism and ball skills. But the quickest of them all – even after two knee reconstructions – is Kayla.

So where did that speed come from?

I’m not sure, but I’m part of a large family and we never watched much TV – never had SKY – and Dad used to make us do time trials around the outside of our house. I don’t know if that was to develop us into athletes or just to tire us out. We were hyperactive kids.

He’d get two of us to start at the same point, take off in opposite directions, and see who could get back first. There was naturally ankle-tapping and pushing during the cross-over. But that part was only a minor concern.

Dad fixed cars and outboard motors, so there’d be tools, parts of engines and other sharp stuff lying around all over the place. It was a real obstacle course, but it was great training. Great… umm… dangerous training. You’d sometimes pick screws out of your feet at the finish.

The combination of sprinting, tightly turning, watching your feet, bracing for a potential head-on, while dealing with sneaky tactics, was perfect training for netball though.

Can you tell us a bit more about your family?

My mum, Pamela Jones (as she was), is from the Falkland Islands. That’s a tiny place at the bottom of South America. It’s famous for penguins, but better known for England and Argentina fighting over it in 1982. In Spanish, the Falklands are called Las Islas Malvinas – and Malvina is my middle name.

Mum’s family moved to New Zealand when she was eight, which was long before the Falklands war. She’s one of two kids.

My dad, James Cullen, has Ngapuhi and Cook Island roots. He grew up in Kaikohe.

Dad was the oldest of eleven kids. His father wasn’t around as much as he could’ve been and Dad had to grow up fast to help support the whanau. He’s still a real hard worker and, in addition to being awesome with car and boat engines, has worked at Mainfreight for more than 35 years. He starts at 4am and is a bit of a legend there.

Mum and Dad met a bit later in life. Mum had two kids by then, as did Dad. Then three more of us came along. I’m the middle one of the last three – or the second-youngest of the seven. I’ve got five brothers and a sister.

I remember one of my brothers fractured his foot at Intermediate school and was in a moon boot. He couldn’t resist taking his spot in a 100m race though and won it, despite his footwear. Being quick, and injury prone, ran in the family.

I see plenty of both my parents, but Dad now lives in Mt Wellington, while Mum has stayed in the family home, where I grew up, in Meadowbank. 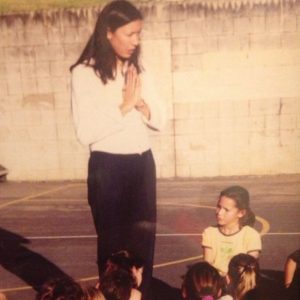 An eight year-old Kayla Cullen with former Silver Ferns defender Bernice Mene. “We didn’t really watch TV at home, so I didn’t know all the famous sports stars. It was cool to meet Bernice, but mum was more excited than me.”

What sports were you into as a kid?

I was a tomboy and played everything. I was right into basketball, netball, athletics, volleyball, touch, rugby… anything really. Except swimming. I was useless at swimming.

We were graded for swimming, with the good kids being Dolphins, the next best Sharks and the last group were Snappers. Obviously, I was a Snapper. I just couldn’t do it.

I was reminded of that when the Silver Ferns had to do a triathlon this year as part of a training camp. I was one of the last out of the water. There must have been a few others that were Snappers at their schools too.

Why’d you head to Auckland Girls’ for high school?

I heard they were really good at netball. And they were – until the year I got there. We didn’t win a single championship.

On paper, we had one of the best teams in Auckland, with the likes of Phoenix Karaka and Alysha Hukatai. But we just couldn’t win.

You won some things in athletics though?

I had a bit more success there. The 100m, long jump and high jump were probably my top events. I won titles in those at AGGS and placed in the Auckland schools’ champs.

I remember racing over 100m at the Auckland champs against Portia Woodman, who is killing it now in Rugby 7s. We were all scared of her because she was real quick. I’d never used starting blocks, but decided the final was a good time to give them a go. I didn’t know how to set them up though and time was ticking by. Portia noticed I was in trouble and came over to help, just before the race started. She got me sorted – and then beat me.

There have been a couple of times when you weren’t moving too quickly. What’s the story with your knees?

Yeah, I’ve had two ACL knee reconstructions. One on each leg.

The first was in 2008, when I was playing my first game for the New Zealand under 21s. I was 15 or 16 and Eboni Beckford-Chambers, from England, was marking me. She was at goal defence and I was a goal attack at the time.

I took the first centre pass and she came over the top and pretty much just crushed me. It felt like I was giving her a piggy back. I called time off. The physio checked my knee and thought I’d be OK, so I went back out. That didn’t go so well.

The second time was five years later, when I was with the NZ under 21s again. There’s an under 21 curse.

We were playing Scotland and I caught a ball, and tried to pass and twist at the same time. I landed really awkwardly. My foot stuck but everything else twisted. I felt a bit silly. No one else was anywhere near me. But that meant another 16 months doing rehab work. 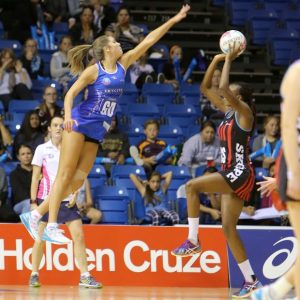 Did you shoot a fair bit when you were younger?

I played both attack and defence, but loved goal attack and was signed by the Mystics as a shooter.

At one of my first sessions with the Mystics, Maria Tutaia wasn’t training for whatever reason, but she’d come to watch. Obviously I knew who she was and I just got really, really nervous. I think I did three air ball shots in a row in front of her and I was like: “Argh. She must think I’m so bad!”

There was an injury in the defensive end that season and Te Aroha Keenan (the coach) moved me back there to cover things. I’ve been there ever since.

I don’t long to be a shooter now. I don’t think I’d like that pressure at this level.

What’s working for you as a defender?

Playing as a shooter has helped. So I feel like I know what their shooters are going to do. Or, more correctly, what they want to do.

Defenders aren’t known to have such great attacking skills, but having played at the other end of the court, I like to think I can get the ball down to our attackers quickly and safely – most times, anyway.

I think my biggest asset, though, is conning people. So looking like I’m not interested – and then pouncing and having the speed to get there.

I’m 6ft 1in, but Wai (Taumaunu – the Silver Ferns coach) reckons I’m a bit short to be a goal defence, which is where I mostly play for the Mystics. She prefers me at wing defence. Hopefully I’m making her reconsider with the way I’m playing. But I’ll go wherever I’m needed, Wai!

And how’s the rest of the season looking?

I’d love to win an ANZ Championship with the Mystics. We have the best team we’ve ever had and we have the environment right.

Then I want to make the Silver Ferns squad for the World Cup and be a starting part of that team. The Aussies will be tough, but I think we’ll give things a better nudge than some people might predict.