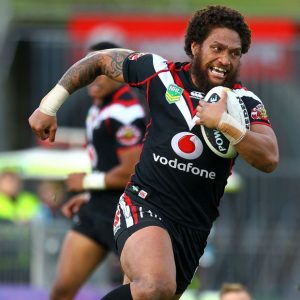 At the end of the 2014 rugby league season, Manu Vatuvei had played 194 games for the Warriors – and, in a chat with Caley Wilson, he looked back on his footy and family life. This weekend he turns out for the Warriors for the 200th time.

Can you tell us a bit about your family background?

Dad moved to New Zealand in the 1970s. Then my mum and the other kids followed.

I understand you and your partner Jen have three girls. What’s life like as the only male in the house now?

It’s tough. I treat the little ones like they’re boys, but they end up being girlie anyway, and doing stuff with their mum. I’ve had to sit there while they put make-up on me. And I sing their little girl songs with them. I enjoy it though. It’s part of fatherhood.

A different environment from when you were growing up?

At home it was real strict. I had to speak Tongan there. The only time I could speak English was away from my parents or at school. But that was a good thing. It made me learn how to speak Tongan a bit fluently.

The church has been a big part of your world?

Dad is a minister at our Tongan church. That’s the Free Church of Tonga.

I used to play the trombone in the brass band there. I think I’ve lost it now though. It’s been a while since I touched an instrument.

When I was in the band, you tried other instruments like the bass and euphonium and trumpet. It was pretty tough.

But I’ve moved on now with my family to the Church of Life, a Christian church in Mangere. I’m enjoying it.

It was hard to leave my dad’s church, because he was one of the ministers there. But he understood that I had my family and it was a better move for us.

He’s just happy that I follow God. That was the one thing he wanted me to do.

I was a pretty average student. Had my bad times. Had my good times.

I was just lucky that sports were there for me. I loved sports. Athletics… rugby… volleyball. And, out of school, I played league for Otara and Otahuhu.

I did it for Otahuhu and had a bit of success there – especially in the sprints.

There’s a boxer in your family too, isn’t there?

Yeah, my brother “Horse” went into the ring not long ago.

We’re happy with the change he’s made from where he was. Growing up he was in a lot of trouble with the law. He’s been inside. I kinda missed him a few times while I was growing up. But I always visited him – and kept in contact.

I think he was another reason that kept me out of that side. It always scared me a lot, and put pressure on me to stay on track.

I think getting my first contract. I had my father there. It was pretty emotional. Coming from where I was growing up in Otara… coming from a neighbourhood that people didn’t think much of.

And your roughest time?

That Parramatta game. (In 2007, against the Eels, Manu had a rugged night with his handling.)

It took a lot out of me. But with the help of the fans, the club, and everyone real close to me…

If they didn’t help me, I don’t think I’d be in the place I am now.

Ivan Cleary had faith that I could bounce back. Ruben Wiki and Steve Price too. They pulled me back on track. They reminded me that it was only one bad game – and that I should concentrate on my job, practise and start all over.

You can be brutal when you’re in sight of the tryline. What goes through your mind when you’re a few metres out, but there are defenders in the way?

Nothing – apart from being real aggressive. That’s all. Everything else just goes blank.

Who are your best rugby league mates outside of the Warriors?

There are a lot, especially with the Kiwi boys.

But one person I got real close to was Frank Pritchard. We met at a rookie camp and became friends there. Then, when I came into the Kiwis in 2005, I spent a lot of time with him.

I was one of the youngest and we hung out together and have been good friends ever since.

And what about plans after you finish playing?

Yeah, I’m still working on that. I have a few ideas. The police is my number one at the moment. But there are a few other options that my wife and I want to explore.