Alex Glenn – a Bronco with strong Raro and Kiwi links 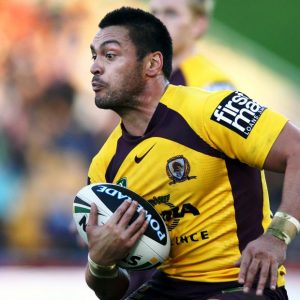 Alex Glenn in action for the Brisbane Broncos (www.photosport.co.nz)

You wouldn’t guess it now, with him over 100kgs and about to start for the Brisbane Broncos in today’s NRL grand final, but when Alex Glenn was in his teens, his body was too fragile for rugby league. Sharp pains in his spine led to a diagnosis that, in layman’s terms, he had curves in places where proper backs were straight. The risk of permanent damage meant contact sport wasn’t just discouraged. It was banned. For three years.

Luckily for Alex, touch rugby was allowed. So he played lots of that – and was good. Good enough to play for the Queensland schoolboys’ rep team. And, in his final year at the Gold Coast’s Miami State High School, he was chosen to play for Australia. But wearing green and gold was a step too far for this Kiwi kid, so he turned that opportunity down.

Alex (27) grew up in Beach Haven, on Auckland’s North Shore, and played junior rugby league there for the Northcote Tigers. His Pākehā dad was from the area, while his mum was from Tupapa, in Rarotonga.

His parents split when Alex was four and, although his mum and dad stayed good mates, Alex lived with his mum, Ann. Those two are still super-tight and you’ll find no fight from Alex to any suggestion that he’s a mummy’s boy. He knows how much Ann sacrificed to ensure he didn’t miss out.

Alex went to Beach Haven Primary, Birkdale Intermediate and then, briefly, to Birkenhead College. But, just after he started high school, Ann decided the Gold Coast might provide a better life. Alex couldn’t disagree when he found himself at Miami High, right by the beach, and having surfing lessons for PE. Twice he was named the school’s sportsman of the year.

Around that time, his back started playing up, but when he got the all-clear to return to rugby league, he was hungry. And among those to take notice was Wayne Bennett, the legendary Broncos coach.

“I didn’t know what to say when Wayne called,” recalls Alex. “I was so nervous.

“When we finally got to meet, my palms were sweaty, but he said he wanted me at the club.”

Wayne tends to get what Wayne wants and soon Alex was captaining the Broncos under-20s team. He made his first grade debut at 20 and, a couple of seasons later, while some of the stars were out with State of Origin duties, he became the club’s youngest ever captain at 22. He made his debut for the Kiwis that year too.

Alex later found out that part of the attraction for Wayne was that he thought Alex looked like one of the club’s superstars of the time, Karmichael Hunt. Both have Cook Islands heritage, with Alex’s grandparents, Teokotai and Anne Kapi, still in Tupapa now.

Alex and Karmichael are among a host of Cook Islanders to reach the top in rugby league, including John Whittaker, who was all grace and speed as an outside back for the Kiwis in the 1970s, and Kevin and Tony Iro, who used their frames to great effect in both hemispheres in the 1980s and 1990s.

While Alex has played in the centres and on the wing, he’s pretty clear about his preference for being in the forwards and he’ll start in the second row for the Broncos today.

With Johnathan Thurston and his North Queensland Cowboys mates desperate for a first-ever premiership, you can bet boredom won’t be a worry for Alex this evening.

Alex Glenn is one of at least 10 players with Māori or Pasifika backgrounds who’ll take the field in today’s NRL grand final.

And let’s not forget that the father of the great Johnathan Thurston (Graham), is a Kiwi. As, of course, is the Broncos' assistant coach Stephen Kearney (Māori).