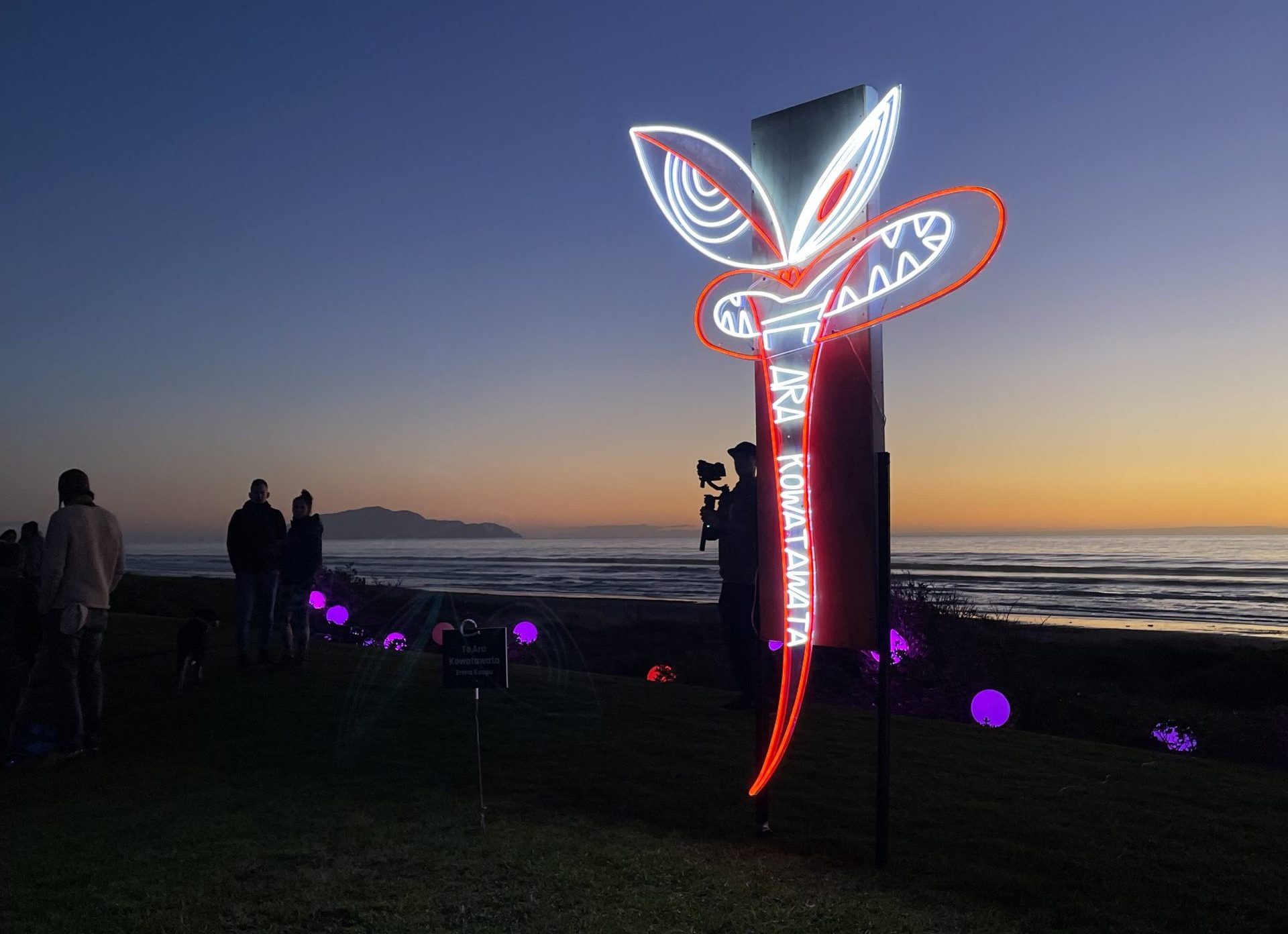 Every region, city, and small town in New Zealand has a distinct personality. Ōtaki in the Kāpiti Coast is known as a Māori town. That didn’t happen by accident, writes Tainui Stephens.

For most of my life, I’ve been a city dweller. I was born in Christchurch and have lived in Wellington, Auckland, Sydney and London. By the time I hit my 40s, I was lucky enough to be able to work from home, and decided that a small town life was what I wanted.

The city is a magnificent human creation responsible for great leaps of progress, but I was over the traffic, the noise, and the crowds. I was also irritated by people with an excess of money or self-regard and an indecent wish for more. I wanted to live in a place where no one blinked if you went to the supermarket in your pyjamas.

The day I moved from Auckland to Ngāruawāhia is still one of my happiest. The town had all the services I needed — and the local Tūrangawaewae marae with its many activities for the Kīngitanga was a justified source of local pride.

Later, in 2010, when I shifted to Ōtaki, I was just as happy. I’d been there earlier when it was a different place.

At that time, in 1985, there were only 70 people fluent in te reo among the Raukawa iwi. Most of those speakers were kuia and koroua. No one was under 30. I’d been sent to Ōtaki to film a story for the weekly Māori television show Koha about the new Te Wānanga o Raukawa.

This first Māori university was part of a wider tribal strategy called Whakatupuranga Rua Mano. The vision was to develop the wellbeing of the people, and rejuvenate their sense of Māori pride by the year 2000. One way to achieve that was to nurture a generation of bilingual leaders skilled in administration and knowledgeable in tikanga.

The wānanga taught the reo in full immersion courses that catered for the young people of the tribe. These innovative hui rangatahi also attracted devoted students from other rohe. Regular marae live-ins enabled the kaumātua to pass on the language in an environment ruled by tikanga.

Not only did this bold experiment serve as a precedent for subsequent Māori tertiary institutions, it truly did revive the language within the tribe.

Education is a powerful dynamic in the town. Only a single generation after making that Koha programme, I hear the language everywhere in the Ōtaki streets. Apart from the busy wānanga, there are four kōhanga reo and two kura Māori, as well as bilingual and immersion units at the state and Catholic primary schools. There are waiting lists everywhere.

To have halted the language loss and generated its revival in such a short time remains an astonishing feat. 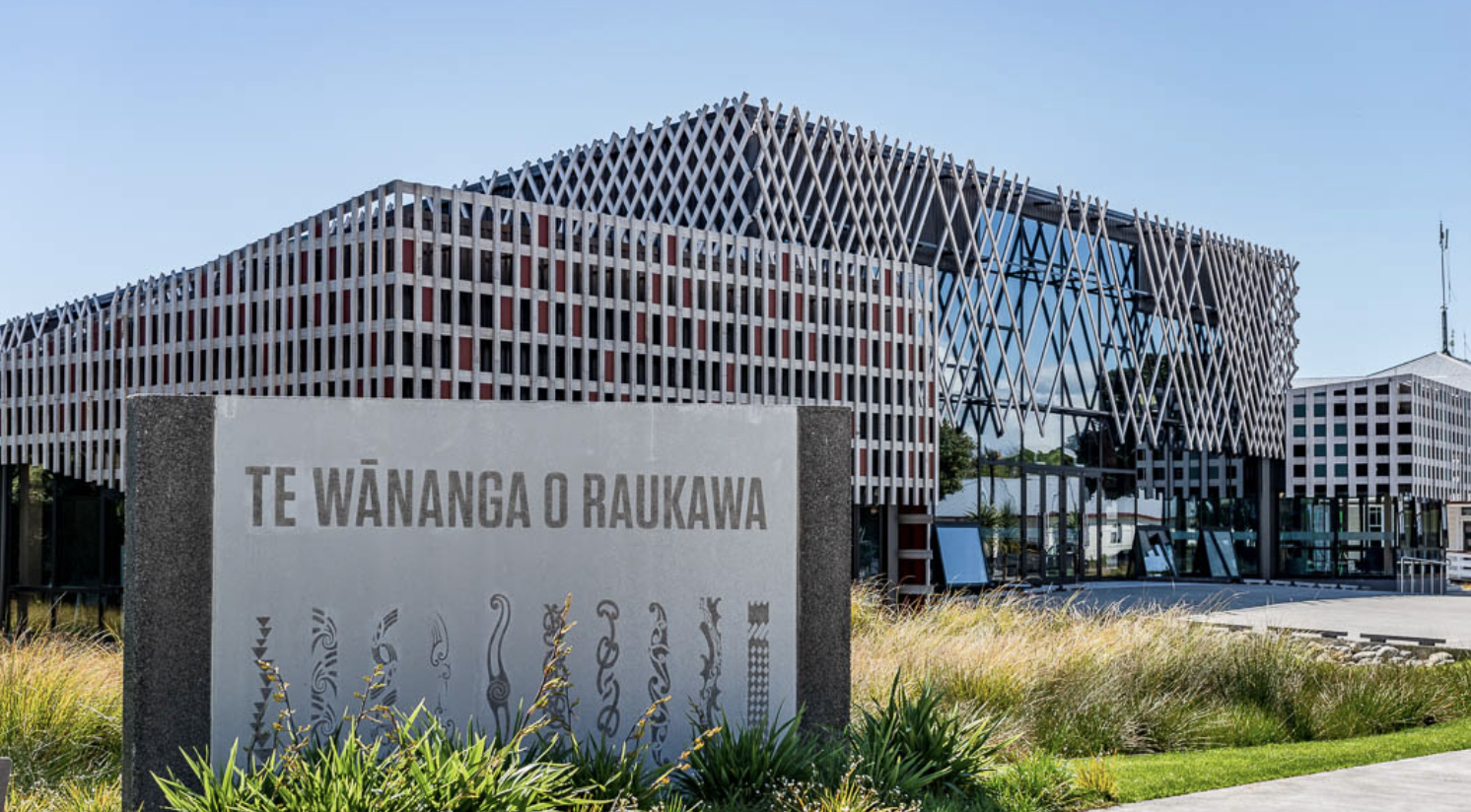 The wānanga is one formidable expression of Māori control over tribal interests. It was created by the formal collective of Te Āti Awa, Ngāti Raukawa, and Ngāti Toa rangatira. The ART Confederation enjoys strong bonds of whakapapa and history and has collaborated at critical times over the last two centuries.

After migrating from other parts of the country around 1819, the tribal maps were redrawn with confederation lands located between Waitapu in Manawatū and Whakatū in Te Waipounamu. Later joint ventures included the Rangiātea church (1851), the Ōtaki Māori Racing Club (1886), the Raukawa marae (1936), and the visionary tribal regeneration strategy Whakatupuranga Rua Mano (1975).

One of the main architects of Whakatupuranga Rua Mano is Professor Whatarangi Winiata. He and his wife Frances, their children and their families are a respected and beloved presence in Ōtaki. The professor is a powerful intellectual and tribal leader whose foresight along with those of his elders, colleagues, and iwi have had a profound impact on the modern Māori world. 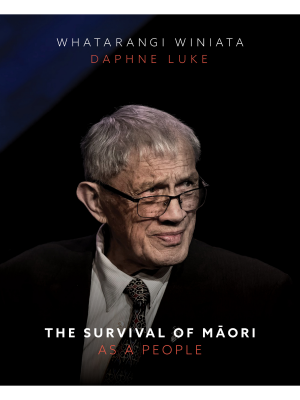 The Survival of Māori as a People by Whatarangi Winiata, published by Huia.

In July, mātua Whatarangi was celebrated with the launch of his book The Survival Of Māori as a People. This impressive tome offers a lifetime of profound thought and the wisdom that comes from courageous action. He notes four main mātāpono or values that were created by the ART Confederation as they approached the 21st century:

The people are our wealth; to develop and retain.
The Māori language is a taonga; to halt its decline and revive.
The marae is our principal home; maintain and respect it.
Self-determination.

As an outsider to this region, but as one who has married in and has been accepted by the iwi, I see the end results of these goals every day I walk around town.

I meet elders who have offered endless hours of voluntary labour and skilled contributions to the Whakatupuranga Rua Mano dreams. I see younger people who do the same today.

The compulsion to support iwi kaupapa continues, because the work continues. The tribe uses clearly mandated authorities to uplift the mana of the people in areas of education, health, and identity. The local iwi leaders are well known and respected. Everyone knows their role at any hui. The people, and especially the rangatahi, remain the source of the tribes’ psychological and spiritual wealth.

It’s common to hear Māori spoken in the supermarket, the gyms, and the takeaway shops. The window to my manspace at home opens out to the Waitohu stream and a route to the beach. I regularly hear whānau or school students park up and happily chat away in Māori as they play and disappear down the path. At other times, I‘ll hear ancient words curling through the sea breezes, often because someone has climbed atop the big sand dunes to practise their karakia.

I’ve found that, in Ōtaki, if you speak te reo to most Māori in town, they will at least understand you. A good number of them from tamariki to kaumātua will happily continue the kōrero in te reo. Most Pākehā I come across are at ease with the evident Māoriness around them and many are learning the language themselves.

However, not everyone in Ōtaki is a fan of Māori expressions of identity. There was a recent stoush between Raukawa artist Hōhepa (Hori) Thompson and a neighbouring business on SH1.

Hori had placed a sticker with the word “rāpihi” (a reo version of “rubbish”) on a rubbish tin outside his shop. His neighbour took umbrage and removed it. Hori doubled down because he wants to create a place for his children where reo Māori is seen and spoken. Like many in Ōtaki, he isn’t afraid to take an argument to social media and call out bigotry.

The confederation has fostered a marae-based focus from which to explore the history and traditions of the region. The five marae associated with Ōtaki serve the community well in matters of life and death.

The paepae are often filled with excellent speakers and the manuhiri are welcomed by skilled kaikaranga. Each marae has a team of workers, and people who can carry out the rituals. Sometimes the ranks are thin because of the many demands, but the inevitable pull of whakapapa keeps our marae alive.

People who visit or return to Ōtaki talk about feeling healed in some way by this town. It certainly has physical advantages, like easy access to bush and beach. But there is an indigenous spirit in Ōtaki that is unapologetic and proud. By definition that spirit is also loving.

None of Ōtaki’s achievements have come easily. The self-determination that is so evident is because of a potent mix of rangatiratanga and kāwanatanga: tribal authority and self-governance. The revival of the language and the way of life that comes with it has enabled the iwi to see the world once again through Māori eyes. What they see feeds their minds and hearts. 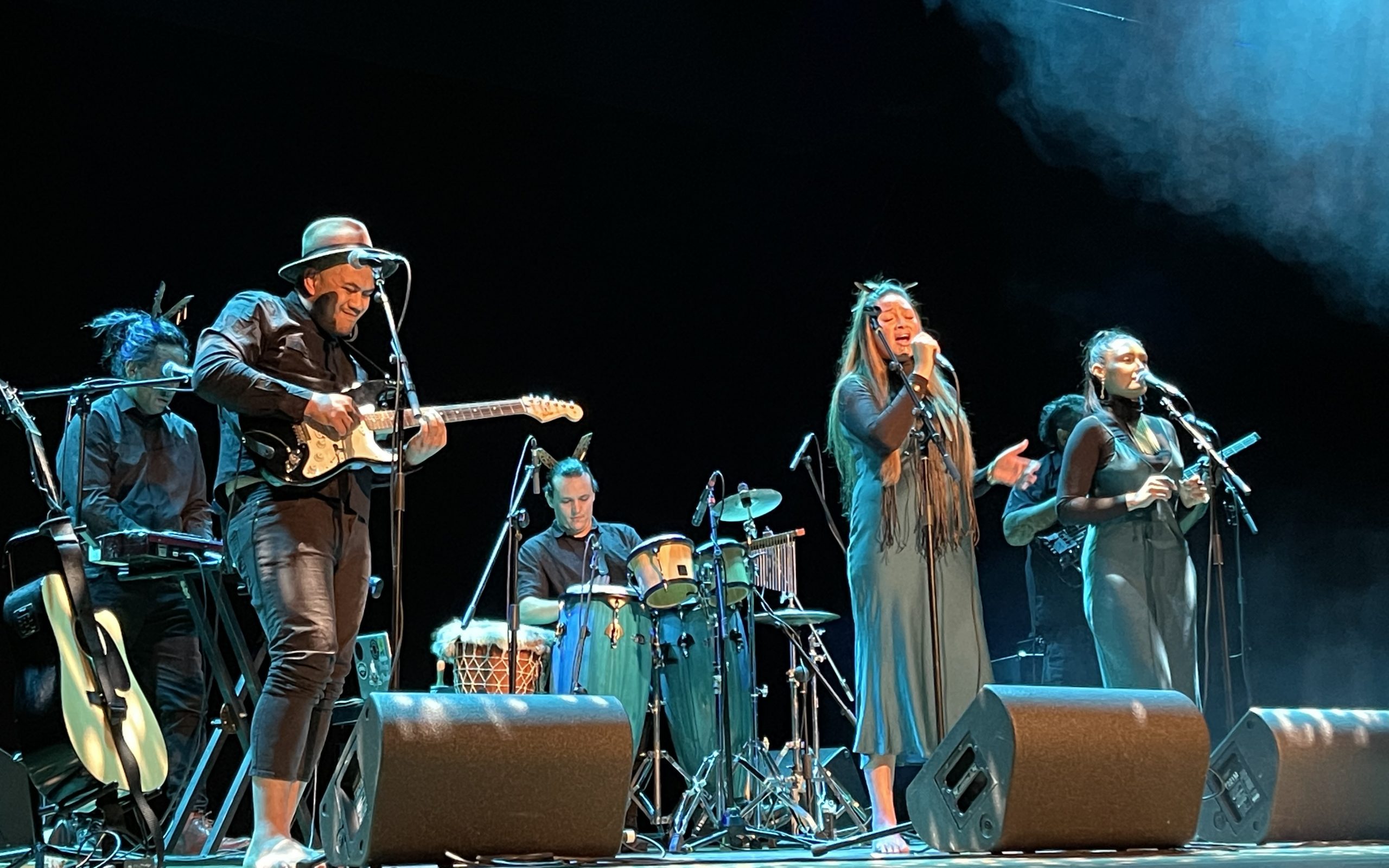 Maisey Rika and her band performing in Ōtaki for the Matariki Ramaroa Festival (Photo: Māoriland)

The recent Matariki celebrations weren’t just about farewelling the past year and looking forward to the next. Matariki Takohanui is about giving thanks for what sustains us and for what we’re able to offer each other. At the end of Māoriland’s Matariki Ramaroa Festival, we celebrated the beacons of our Māori world and community — people of the past and present who give of themselves and shine a light into the places we must travel.

Many of us gathered on Ōtaki beach to light a bonfire. As the daylight dimmed and a peaceful cloudless night fell into place, the full moon Rākaunui loomed large above the Tararua ranges. At the same time, we saw a pod of right whales in the Raukawa moana.

While this wondrous communion with nature played out before our eyes, our ears were blessed by Maisey Rika. She had joined us at the bonfire to offer her gift of song “Tangaroa Whakamautai”.

Maisey’s call to the sea guardian Tangaroa gave us a chance to humble ourselves before nature as we entered the new year. We did so savouring the gifts that living in a Māori town like Ōtaki offer us all. 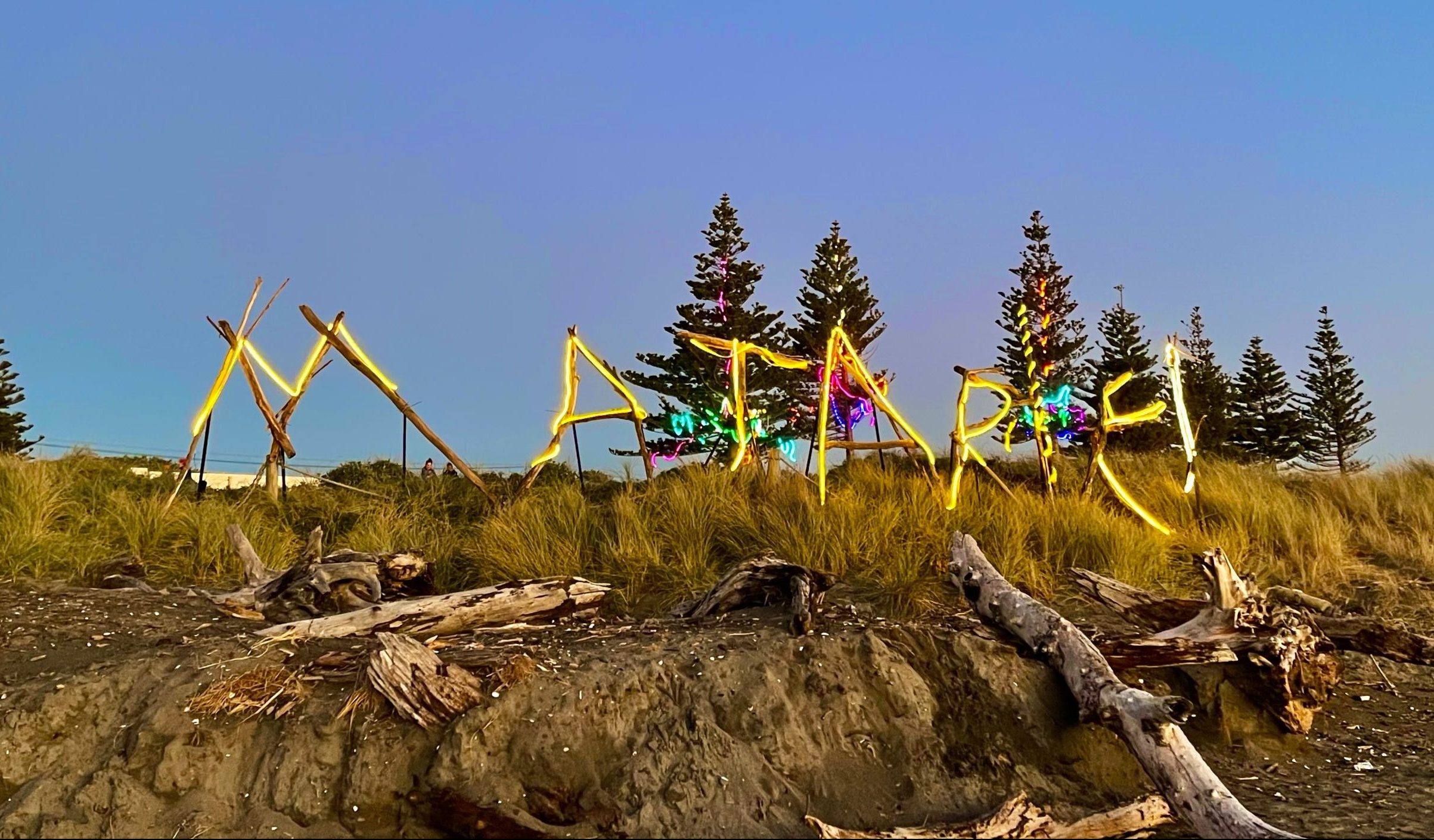