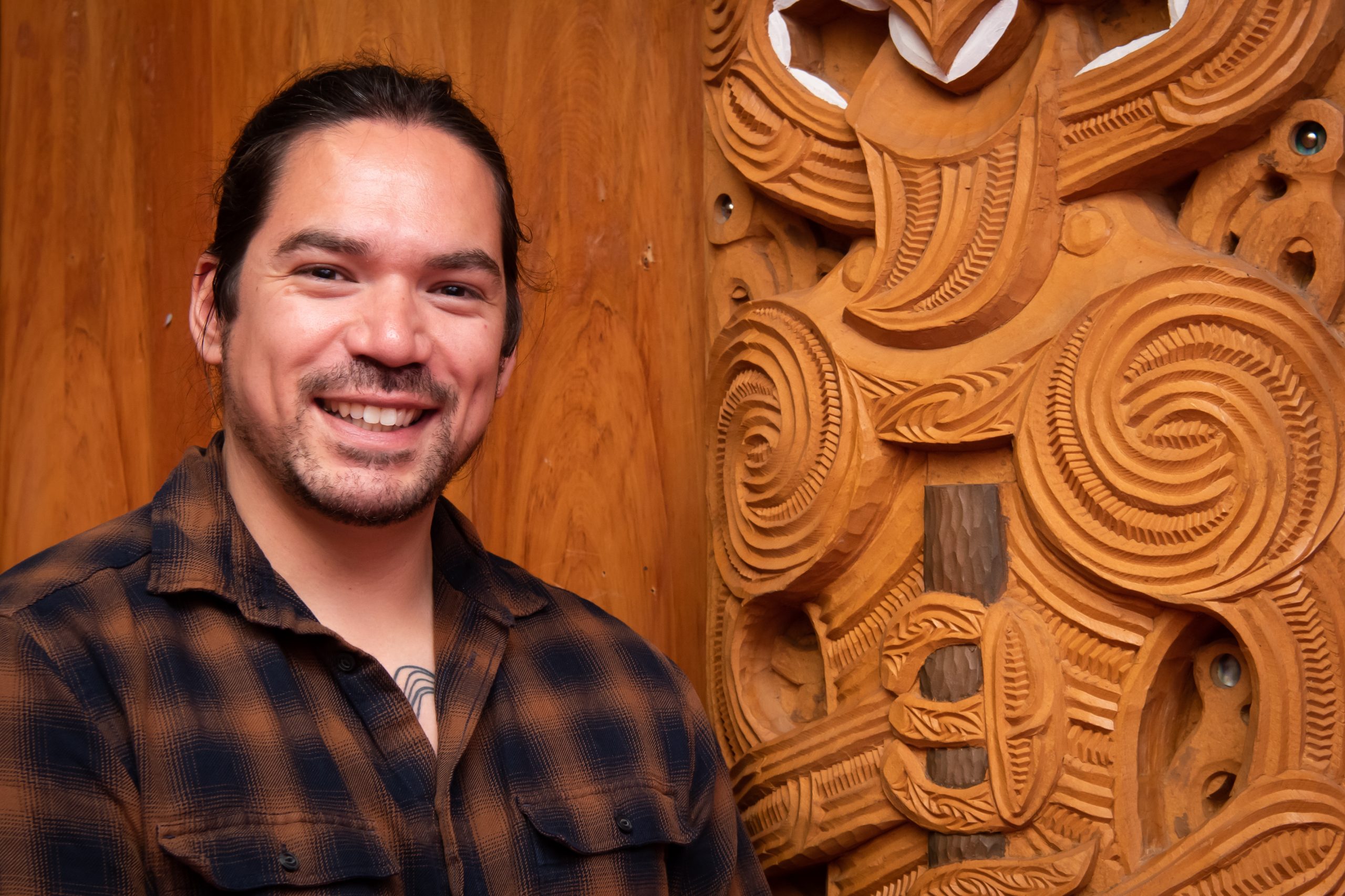 Vini Olsen-Reeder is a Māori-language speaker from Tauranga Moana and Te Arawa. He grew up in Whanganui, speaking only English at home. Now, he teaches the reo at Te Herenga Waka—Victoria University of Wellington, and tries to navigate the divide between proficient speakers and those who are still steering their waka toward that place.

This last Māori Language Week, more than any other, was really tough for lots of people. I’ve felt compelled to tautoko friends who were criticised in the media and online, while also taking my own share of attacks.

I also reacted and dealt it out. Some of the criticism was fair, some was careful, and some was unkind — and just about all of us did a mix of all three.

The kōrero that really cut deep, for me, went something like this: “If you’re privileged enough to speak Māori, you don’t understand language trauma.”

There’s a really difficult intersection between trauma, privilege, and second-language learning. The assumption that I’m too privileged to understand this, hurts.

It’s these comments that have left me feeling whakamā and unstable. I found myself caught up in anger even though I’m usually a pretty critical but careful guy.

As the dust settles following Te Wiki o Te Reo Māori, I feel like I’ve been through all the stages of grief. I’m unsure what part I play now, and I don’t know what to do next.

I’ve had heaps of privilege stacked in my favour, but that doesn’t mean my journey wasn’t hard.

We never had the reo growing up, but I was lucky enough to go to university to learn it. And I feel blessed to have had that access.

I’m still not a proficient speaker in every space and context where I’d like to be, but I can get through my days and nights, through work, and through other circumstances, with reasonable comfort.

I make mistakes, and there are still words for me to learn and proverbs to research. I’m still rats at whaikōrero. I’ve got the fancy language base in my head, but I can’t get it out on the fly. There are people who can kōrero less than me in everyday life, but are mean on the paepae.

Everyone is different. In a world of language revival, it’s perfectly normal to have different sets of capabilities.

I don’t use the word “fluent”. It’s an unnecessary word with an intensely colonial history. Most of the world knows more than one language, and hardly any are “fluent” in both.

Western scholars used to measure bilinguals up against their own one language. When they saw that bilinguals couldn’t do everything in two languages that they could do with their one, they decided bilingualism was a weakness in the brain.

They developed language subtraction methods for schools in colonies to “save us”, and that’s how our destructive education policies came about.

Some of our language trauma is connected to that word “fluent”. It’s ripe for decolonising, so at the moment, I’m rejecting it altogether.

We’re not “not fluent” in Māori. We’re all developing as multilingual people, and we’re the most multilingual Māori society ever to have existed. Ever. We’re bloody good at it. And all capacities are valid.

Before I started learning, I’d never been to my marae, and I didn’t know the name of my iwi. I thought I was Rarotongan for a time because my dad spent part of his childhood there.

I lasted three kapa haka practices at a small school kapa before I didn’t feel Māori enough or quick enough to be there. I lied to the organiser and said I needed to get my grades up, and left to “focus on study”.

I cried in the dorms for ages over that. I’d let myself down. I’d closed my one door to the Māori world, and I’d lied.

When I got to university, I enrolled in the reo courses there, and went on to a marae for the first time ever. I looked around at all these people who knew what they were doing, who were all speaking Māori, and thought: “Here we go again. The one Māori who doesn’t speak Māori is here, and it’s me.”

I truly thought that every Māori person could speak Māori. I never even considered for a second that hardly anyone in my whānau could speak Māori, so that obviously wasn’t true. All I saw were those people on the marae — and me.

That was 13 or so years ago, and back then, language trauma wasn’t a thing. We just felt like shit every day and didn’t know why. Some of us dropped out, cried, yelled. Some of us got yelled at, berated, had the kura kids laughing at us.

As time went on, I learned about my whānau and how our language declined, and that brought more shit to deal with. My beautiful nan, who I lost this year, affectionately called us Māori learners in the family “the white ones”. (Love you, Nan.)

There were plenty of days I wanted to stop and give up the reo forever. I felt that I couldn’t continue, that I was done with proficient speakers mocking me, with other Māori viewing me as Pākehā, or with having to go to the cops about online racists.

I did take a break sometimes. But I came back.

The events that bring the trauma out still continue, and it’s about managing these in a way that allows me to carry on.

I’ve had to learn to check myself over the years, and I’m still learning. I’ve also had to carry some stuff that some people haven’t had to carry. Nobody else can know all of the ways in which my body, mind and soul have changed, or been altered by others, over the years.

Some of those things have been really hard. That will be true for all of us. Te reo is a contributor to that hurt, but it’s also a part of that healing. I carry that relationship every day, and it’s bittersweet.

Which brings me to my problem of what to do next. After last week, I’m not sure whether second-language speakers are meant to share their experiences anymore. That’s not me whining — I’m genuinely not sure. And how I respond to that in the future matters a lot to me.

Privilege is often about who gets the right to speak about what, and when. Sometimes privilege enables you to dismantle something you’ve profited from, and give it out freely. Sometimes it means you should excuse yourself and leave — and shut up and stay silent to leave space for others.

“If you’re privileged enough to speak Māori, you don’t understand language trauma.” What should a second-language speaker, who carries language trauma, do with that statement?

If having the reo is a privilege for second-language speakers, don’t we have a responsibility to dismantle it as a privilege?

And in order to dismantle it, don’t we have to help give it out to others?

In giving it out, don’t we have to share kōrero about the management of language trauma with those at the blockaded stage?

Or, do we have to keep quiet in order to recognise our privilege?

In my case, that would mean ignoring the fact that I can see the pain in people’s eyes. It’s like looking in the mirror at a younger me.

Language trauma is unique to each learner. It’s hard and debilitating. I’m a comfortable speaker, but I haven’t left my language trauma back somewhere in 2008. I’m still living it. I just understand how to manage it. It doesn’t have the same effect on me now.

If that means I’m privileged and meant to stay out of the conversation, what are people who are at the giving-up point meant to do, except give up? I would rather be ready and waiting with a tissue and a cup of tea, and let them know: “I can help you with this. It sucks and it’s hard, but we’re going to end it.”

When it comes to the reo, I’ll always stick up for the little guy. Sometimes the little guy is the speaker who is still finding their voice to challenge the proficient, confident ones.

Moata is right, when drawing on Dr Hana’s words. It can take three generations to get the reo back. I’m not trying to rush anyone. I just want people to know that, when they’re ready, second-language speakers are here to help. We’re here for it, and we haven’t forgotten.

I’d be devastated if we let one of those generations go by because of language trauma. I have stark memories of sitting alone in a cold, damp flat crosshatching kupu 100 times on a piece of paper in the low light of Wellington rain — and shedding so many tears that I soaked the paper. I wouldn’t wish that on anyone.