Nadine Millar: Don’t let perfect be the enemy of good 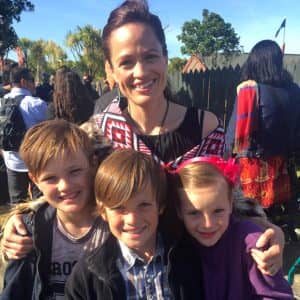 Nadine with her children: Cormac, Liam and Bobbie

About 10 years ago, I tried to enrol my two-year-old son in kōhanga reo. I was enthusiastic and excited to immerse him in te ao Māori. I didn’t want him to feel ashamed of his Māoritanga as I so often felt when I was growing up. I wanted great things for him, as all parents do, and I felt certain that a kōhanga reo could give him all of this and more.

There were selfish reasons for wanting to send him to kōhanga, too. I wanted to learn Māori myself and I knew that the best place for me to get that start would be at the grassroots. Not from CDs or books or night courses, but down on the mat among the blocks and trucks surrounded by nannies and immersed in the everyday reo of life. I was committed. I couldn’t wait to get started.

But our son wasn’t accepted. Despite there being space on the roll, we were told that the board had rejected our application. I was never given a reason why. I was simply left to wonder.

Some people tried to help me see it from the kōhanga’s perspective. “They’re striving to raise tamariki as first language speakers of Māori,” a friend explained. That couldn’t happen in our case because there weren’t any fluent speakers in our home. While my son’s needs were important, I had to understand that the kōhanga had to weigh up the needs of all the tamariki. Having children who weren’t fully immersed in te reo Māori at home might compromise the overall aims and philosophy of the kōhanga.

I was studying Māori development at university at the time, so I understood the theory. Words like decolonisation, language revitalisation and tino rangatiratanga swam around in my head. I tried very hard not to take it personally.

But how could I not? I felt like I’d knocked on the door of te ao Māori and had it slammed in my face. I felt inadequate on so many levels. I had failed to become fluent in Māori before I had children and now my boy was being punished for it. I felt guilty and, worse still, embarrassed that I’d even tried. When people asked me why I wasn’t sending my boy to kōhanga after all, I lied and said I’d changed my mind — that the hours didn’t suit and that I couldn’t manage the transport.

Meanwhile, my loving, supportive, Pākehā husband apologised. “It’s because of me,” he said.

It takes a long time to get over stuff like this — just as I imagine it will take a long time for the two receptionists at Māori Television to recover from the loss of their jobs last week because of their lack of fluency in te reo Māori.

Being rejected by your own people is tough. It can be a huge setback. Learning Māori isn’t just an intellectual exercise. It’s an emotional and spiritual one too. Often we come to the language with baggage going back generations — doubt, fear, shame, uncertainty. If you’re told you’re not good enough it can be devastating. It took me 10 years to regain the confidence to try and walk in te ao Māori again after we were turned away from kōhanga.

It’s difficult to understand how these sorts of decisions raise the status of te reo Māori in Aotearoa. If anything, it’s diminishing. It sends a message to those of us with little or no reo that unless you can speak to a half-decent degree, there’s no place for us in the modern Māori world. It reinforces the fear many of us have, that without the reo, we are somehow less valid, less valued, less Māori.

I don’t take issue with the aspirations, only the way in which we set out to achieve them.  How can we claim to be promoting the revitalisation of this taonga, our language, if along the way, we are excluding, discriminating or discouraging the very people we are supposed to be serving — those without the reo who want to learn?

A few years ago, despite my own hard feelings, I might have thought that the ends justified the means. That in the pursuit of high standards, hard decisions must be made.

But last weekend, in Wellington, I went to a wānanga on Māori language revitalisation, which assured me that having high standards and visionary goals doesn’t require us to trample on anyone’s mana.

The inaugural Kura Whakarauora in Wellington was all about language revitalisation in action. Although largely aimed at overcoming the challenges of Māori revitalisation in the professional sphere, there was plenty of learning on a personal level — and let me tell you, there is a place for you in te ao Māori, no matter what your language ability.

First and foremost, I learned that you don’t need to feel ashamed if you don’t have the reo.  Stacey Morrison, who (together with her husband, Scotty) champions “Māori For Grown-Ups”, stressed that we need to be encouraging and supportive of one another, wherever we are on the journey.

In other words, instead of denying access, closing doors and excluding people, we should be increasing access, opening doors, easing the way — so that people feel involved, valued, and part of something important and necessary.

The second thing I learned is that it isn’t possible to put people in boxes based on what they look like. Be careful of the assumptions you make — there are some mean speakers of Māori out there and they don’t look anything like what you might expect. This may seem like a small or trivial thing, but to someone like me, who has always felt judged on my outward appearance, it is hugely liberating.

Scotty Morrison’s workshop on the mechanics of teaching and learning was a revelation, too. His kōrero helped me to understand why I’ve struggled to progress as quickly as I would have liked this year. Last week I was able to stand up in front of my class and speak solely in Māori for a full 60 minutes, but do you think I could hold a single conversation in Māori that lasted longer than 60 seconds during that wānanga?

Scotty explained that a lot of the time, teaching focuses on grammar even though it’s difficult — especially for beginners — to grasp the rules of language when taken out of context.

But if we put learning into a practical context it becomes infinitely easier. If you want to teach a bunch of kids to play football, would you sit them down and have them read a book on the rules of the game, or would you give them a football and put them on the field?

It’s the same with the language. Take learning out of the classroom and bring it into the home, into the reality of our daily lives.

To paraphrase Voltaire: “Don’t let perfect be the enemy of good.” Give your tamariki whatever reo you have, even if it’s just basic words and sentences at first. Don’t be discouraged by your mistakes or by how slow you seem to be moving. That’s not to say we shouldn’t strive for excellence. No one said it was going to be easy. But let’s pass on the pride to our tamariki, not the shame.

A lot of the time during the wānanga I felt like I was drowning. People debated high-level concepts in Māori, switched languages mid-flow and back again with quips that went way over my head. I laughed along with everyone anyway. Although I doubt my ability to ever attain such levels of fluency, I realise that there’s really no point comparing myself to others. After all, no one expects a newborn baby to be speaking fluently in its first year of life — nor should I expect to be fluent in Māori after only a year.

In his session, Sean Bennett-Ogden reminded us that language is not the end game. It’s communication. Most of us are not learning Māori to become masters of linguistics. We’re learning so that we can make a connection with people. Not so we can show off our skills, but as a taonga to pass on to our children. It’s about whakawhanaungatanga (establishing relationships), belonging, identity.

My son is 13 now and about to head off to college. My desire for him to know and embrace his Māoritanga is just as strong as it was when he was a preschooler, so last month we applied to send him to Hato Pāora College, a Māori boarding school in Feilding. At the end of our four-hour interview we were offered a place with open arms — genuine manaaki. I’m not sure if I’ll be brave enough to let him go just yet (that’s a story for another day) but what a different feeling it is to knock on the door and be welcomed in.

It’s sad that I lost 10 years of my reo journey because of one setback, but that’s what can happen when barriers are put in front of us, jobs denied, our confidence knocked. It’s wrong.

Don’t let anyone tell you that the little you have is not enough. As the whakatauki goes: Ahakoa he iti he pounamu. Though it is a little, it is a treasure.

Find out more about the Kura Whakarauora wānanga here: http://www.kurawhakarauora.co.nz