My pepeha is my world 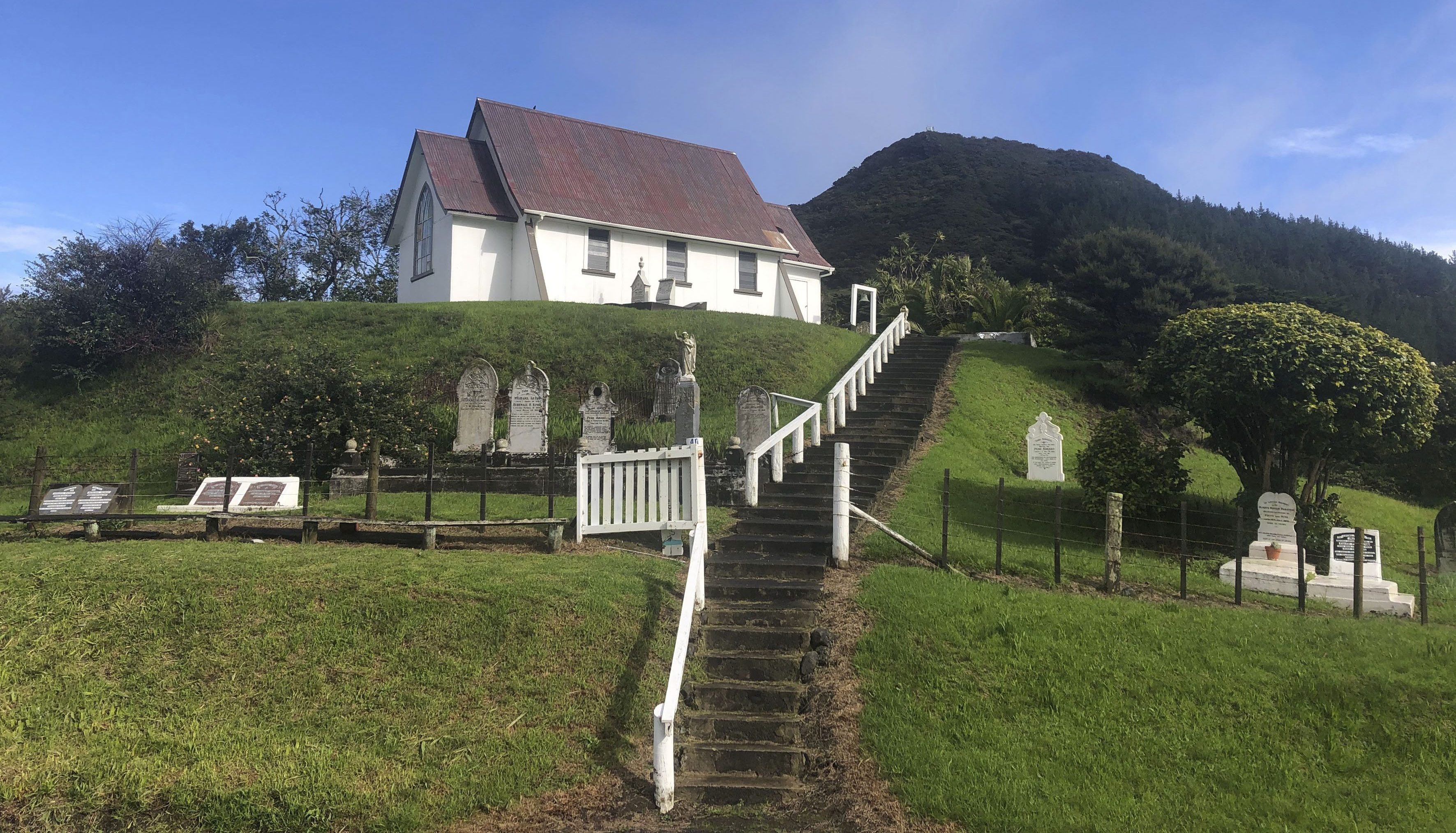 Colonisation triumphs when the colonised lose their language, and then their worldview. The return of the language signals the return of our native minds. — Tainui Stephens on his reo journey, which began as a university student back in the 1970s.

One of the first things we commit to memory when we learn Māori is our pepeha. These brief sayings are heavy with meaning and acknowledge a tribe’s essential landmarks — then, by extension, our personal identity as tangata whenua.

A mountain represents the timeless foundation of a people, and its peak something to aspire to. Tribal waters, whether a river, lake, or ocean, evoke the ebb and flow of our humanity. When a marae, or canoe, or ancestor, is a part of the pepeha, it shapes your family connections to everyone in the tribe — and further back to those ancient ancestors of land, sea and sky.

I started on my own language journey the year after I left school and went to varsity. I had no idea who my tribe was. I had no pepeha. But a successful application to the Māori Education Foundation for a study grant prodded me to find it. My first step was to join the Canterbury University Māori Club.

I still remember the shiver that ran up and down my spine when I stood to learn my first action song Haere Mai. I didn’t understand a single word of what we were singing. But it felt so good. I knew then, in the back row of the varsity kapa haka, that my life had changed forever.

At the end of that night’s practice, I talked with the club’s leader, the amiable Māori studies lecturer, Te Awaroa “Bill” Nepia. He was happy to support my sudden desire to learn te reo. I changed my course of study on the spot, to major in Māori. I went home feeling giddy and floating on a happy cloud of self-discovery. This was me!

The howling screams from my Pākehā mother brought me down to earth.

When I told her of my excitement at my new purpose in life, she hit the roof and then writhed on the floor in helpless anguish. She screamed as I’d never heard before, and wept torrents of tears, all the while stabbing me with commands and pleas to cease my course of action.

This surprised me — and scared the shit out of me. Mum had always said we should be proud of being Māori. She’d given me and my siblings Māori names. And she’d sing Māori songs with gusto at parties.

Our Māori dad knew nothing of the Māori world, and anyway, he wasn’t around. After the marriage collapsed, he’d shot through to Aussie a few years earlier. Our mother had schemed and worked hard to keep her kids fed and educated.

She felt I was condemning myself to a second-rate life, because she knew the lash of racism. As part of a bi-racial couple in 1950s Christchurch, she had suffered the snide ways and prejudice of the era.

When she and Dad went hunting for flats, the name “Stephens” always sounded good on the telephone. But then the landlord would see that one of the couple was brown.

Eventually, they encountered a kindly Pākehā landlady who’d never met a Māori before and didn’t give a hoot about race. It seems I was conceived in a fit of relief and celebration on the first night in their new home.

In time, my mother felt better about my pursuit of the language, because she saw that my interest in my Māori heritage had awakened something in me. To her eternal credit she never begrudged me the explorations that introduced me to a vast new family. She insisted only that I should never forget my Pākehā side. 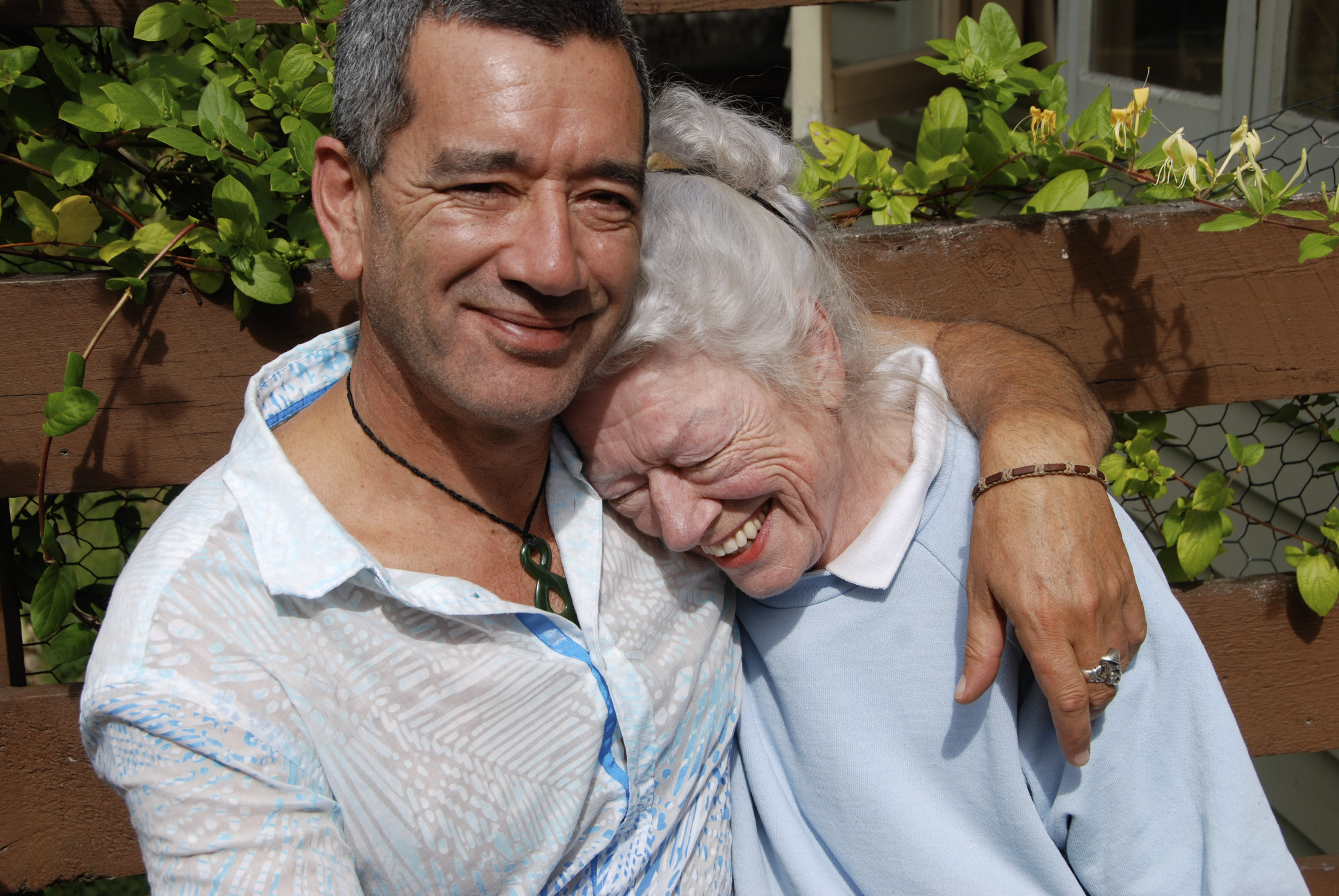 My first lessons in Bill Nepia’s language classes came from the ubiquitous Te Rangatahi textbooks written by Hoani Waititi. Whole generations of urban Māori, who’d never been near a furious snorting wild pig, have struggled to comprehend hunting with Tamahae and Rewi.

While my mind was figuring out sentence structures, my heart and soul was opened to wonderful new adventures with the university Māori club. The pursuit of mātauranga Māori was thrilling. The cultural connections with the community were rich. The parties at 222 Peterborough Street, Christchurch, were legendary. It was a complete education and I lapped it up.

As a student, I had the chance to go somewhere for a few months at the end of the year. Student travel was cheap. I asked Bill if I could spend summer with his whānau in Tokomaru Bay. I wanted to live for a while in a Māori-speaking environment.

He said that was possible but he reckoned it’d be better for me to head to my own tribe. I took his point, but I had nowhere to start. I knew of relations in Auckland, but not of any tribe. All that the old man had told us was he was from “up north”. Oh good, that narrows it down then!

Instead of the East Coast, I went to Auckland and connected with Dad’s family. That blew my mind. A new Māori world peopled with loving aunties, uncles, and cousins. They’d lived in the city since the war and had nothing to do with the marae or the family up north. 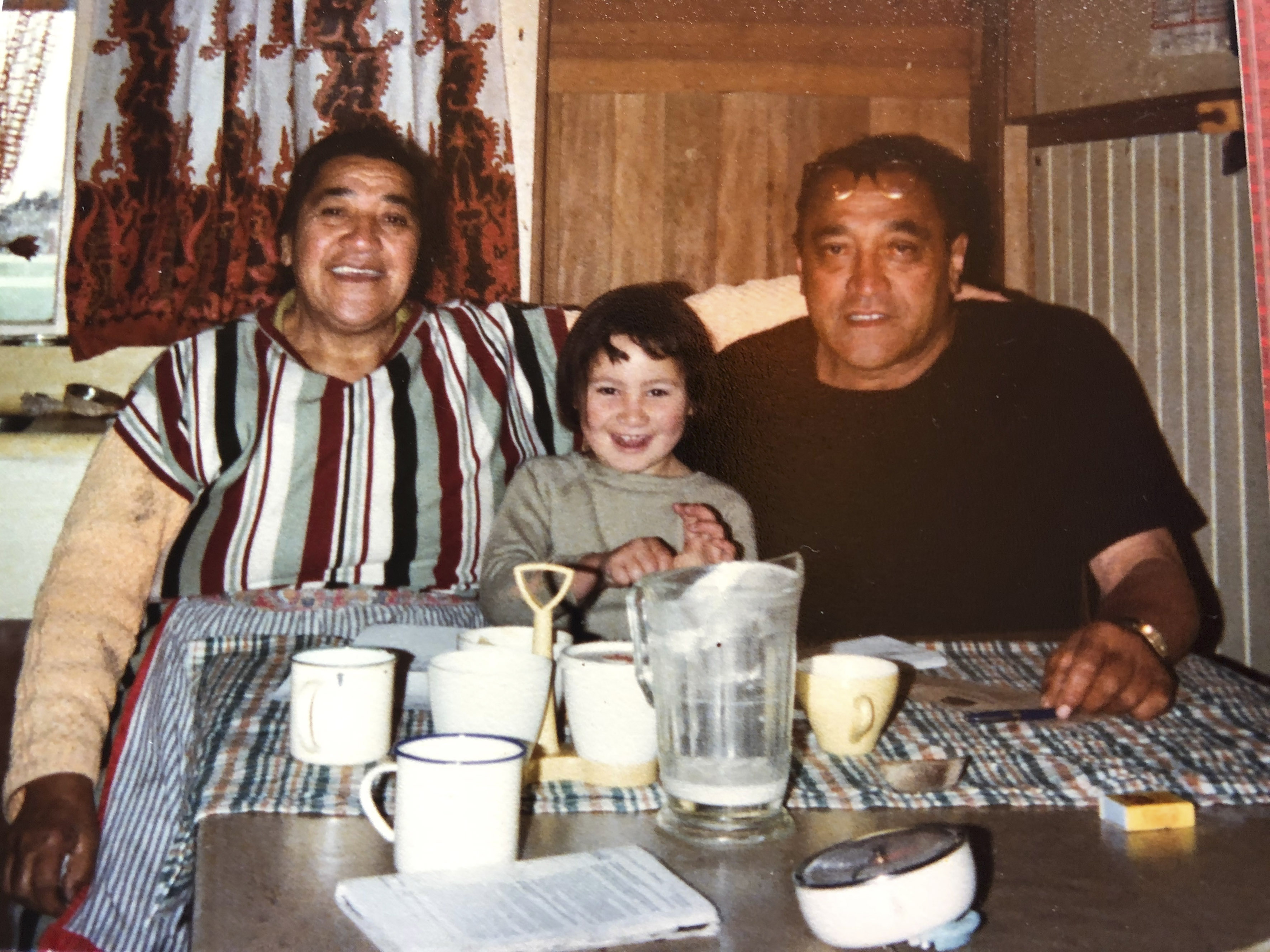 But I learned the name of my grandfather, Bobby Roberts, and the place where they thought he lived: Ahipara. Or, as they used to call it then, “Ahaipra”.

Back in Christchurch, I came across an article in The Listener about a group of medical students from Auckland who’d travelled to Ahipara for a marae experience. There was a photo of a kuia from the marae. Her name was Mereana Kerehoma.

I found her number and rang her up. She was perky on the phone, and when I gave her my grandfather’s name, she filled in the dots. I found out that he was alive and well and living down the road from her at Wainui Junction. I just had to see him.

Next summer, I hitchhiked north, turned up at his farm, and knocked on the door. When it opened, a dark elderly man stood before me, wheezing badly from asthma.

“Holy Hackett!” he said. (I found that my grandfather would say that a lot. I never did figure out who Hackett was.)

The following Sunday morning after karakia at the local church St Clements, I sat with my grandfather on a low wooden bench just outside the gate. The men would sit on one side and the women on the other. It was a tradition that, after the service, there’d be speeches from both sides.

After thanking the minister, there were discussions about matters that affected the community. My turning up was something of note and my grandfather introduced me to the group of kaumātua. I got to my feet and did my own mihi as best I could.

It wasn‘t as scary as it could’ve been. They were all so very lovely and clearly happy that I’d turned up with a keen need to learn the language. The kuia Mereana Kerehoma was there too, and she said my next visit should be to the Roma marae a short way up the road, and I should “talk with the old man Ephraim Te Paa”.

The next day I stood before the meeting house, Te Ōhākī. The marae was empty and I didn’t know what I should do till I noticed an elderly man with a long white beard walking to the marae from the pensioner flats. I went up to him and introduced myself. He already knew who I was. He took me into the whare and offered me a mihi of welcome. 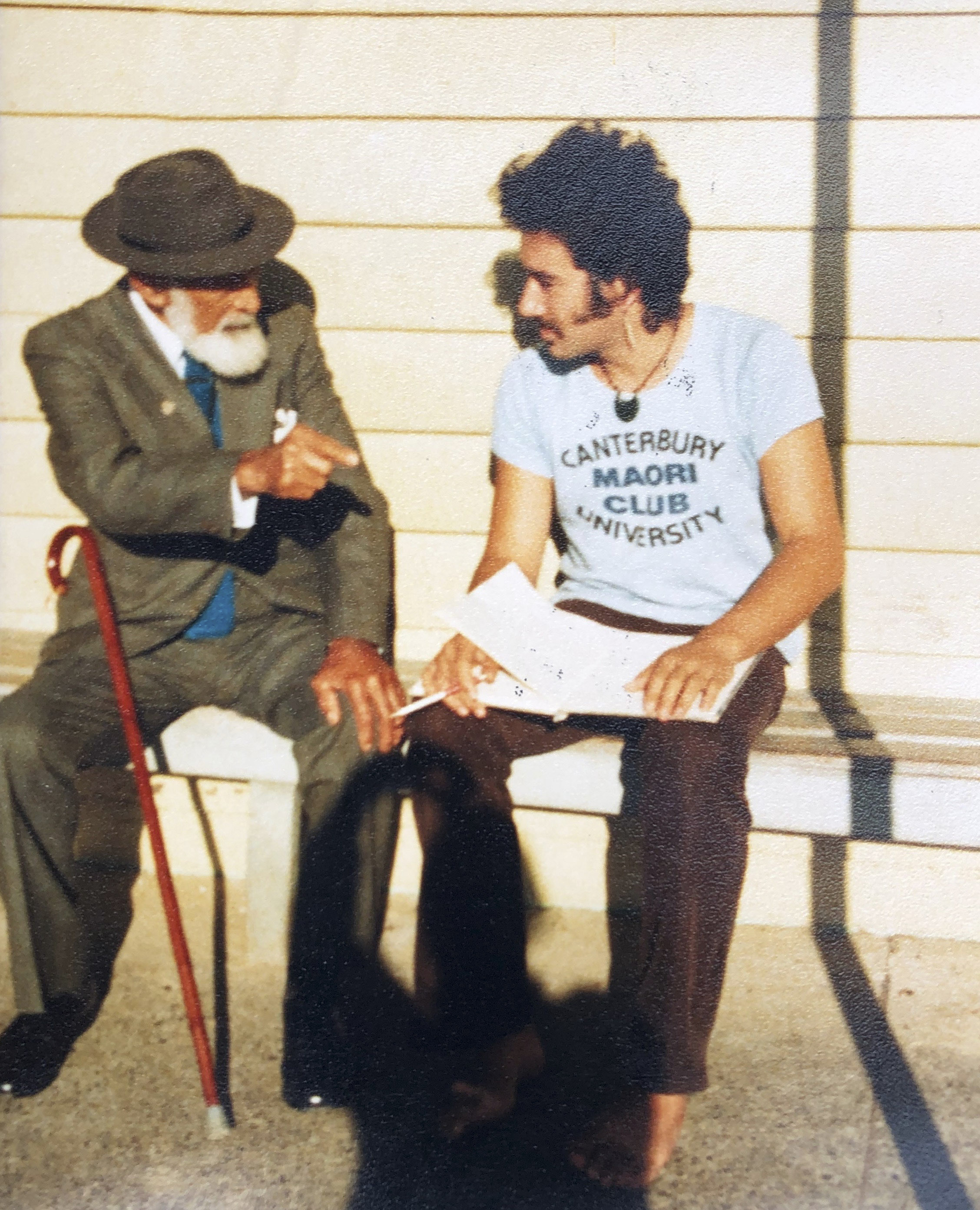 It was from Ephraim and Mereana that I learned my own tribal pepeha.

This pepeha sat easily in my mind. I was proud to have words to utter that explained where I was from.

About a decade later, after the death of my six-year-old son, Aotea, the pepeha was truly carved into my soul. As I threw all my soggy handkerchiefs into my son’s grave at the Ngātotoiti cemetery, Wainui, I looked to our mountain Whangatauatia. I realised that it had been a mute witness to my return to my roots. It had observed me as a young father and husband bringing our child’s placenta and pito to get placed in that cemetery. It now watched me returning home to bury my boy.

My personal story was just one out of untold thousands that the maunga had seen, over thousands of years. That thought made me feel so very small — yet so very connected.

When I return to Ahipara now, I need to see the elements of my own pepeha. My own mountain, my own ocean, my own marae, my own dead, my own relations. Only when I’ve done the rounds, do I feel as if I’ve truly arrived.

My pepeha is my world. Ko tōku reo, tōku ohooho.