I’m good at languages — so why can’t I speak Sāmoan? 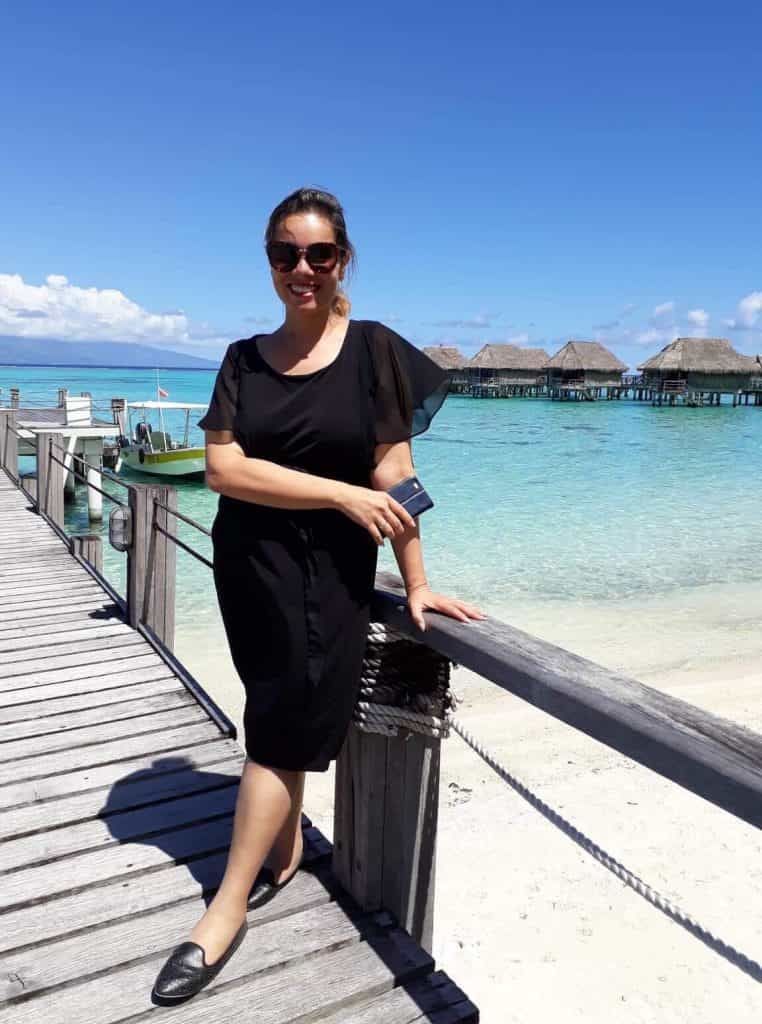 Tupe Solomon-Tanoa’i speaks three languages fluently: English, French, and Mandarin. So why has she struggled to learn the language of her forebears, the language that is central to her identity? Here, at the start of Sāmoan Language Week, she writes about the shame of not speaking Sāmoan.

I’ve loved languages since Year 9, when I started learning French and Japanese at Baradene College, in Remuera. The only other language on offer at the time was German — there was no te reo Māori, and definitely no Sāmoan on the menu. (To put that in context, it was the ‘90s and I was one of a handful of non-Pākehā girls in my year.)

I came top of my class for French. But after graduating, I was quickly brought down to earth the following year when I took a sabbatical in France and couldn’t, for the life of me, understand a word anyone said. It was my first time in a full-immersion environment, and my brain was exploding. After a few weeks, though, things slowly started making sense. Before I knew it, I was conversing, thinking, and even dreaming in French.

Back in New Zealand, I began a law and arts degree at the University of Auckland, and resumed my language studies. In my first year, I received the Senior Prize for French — an award normally reserved for students in their final year. By comparison, I was a pretty average Japanese student. But I had realistic expectations — I knew I wouldn’t fully grasp the language until I’d had a chance to live there.

Some years later, while working for the Ministry of Foreign Affairs and Trade, I had the opportunity to learn Mandarin Chinese when I was seconded to the New Zealand Commerce and Industry Office in Taipei. The job required a professional standard of Mandarin, which meant two years of intensive training. To give you an idea of Mandarin’s level of difficulty, it takes only six months to get to the same standard in French.

I studied at the International Chinese Language Programme, which was renowned for its ability to train Chinese speakers. Many of my classmates were from Ivy League schools in the US. Quite a few identified as “ABCs” — American-Born Chinese — who’d already learned to speak Mandarin from their parents but couldn’t read or write it.

The experience was one of the most intense and rewarding things I’ve ever done. At the end of two years, I was able to speak, read, and write one of the world’s most difficult languages. Of course, you don’t master the language within two years. Your reward for all that time and effort is a solid basis on which to keep building your Mandarin skills … for the rest of your life.

Still, having spoken Mandarin now for more than a decade, I’m sometimes complimented by native speakers who say I speak without an accent. The same goes for French, which I’ve spoken for more than a quarter of a century.

You might say that I have a bit of an affinity with languages. I’ve proved, at least to myself, that I have the ability to learn languages, and I understand what it takes to learn a difficult one to an advanced level.

So why can’t I speak Sāmoan? Why do I struggle so much with the language that is a part of my heritage, and central to my identity? It’s a question I’ve asked myself many times — and it has been a source of deep shame for me.

There have been many occasions when I’ve been criticised or publicly shamed for my lack of Sāmoan. Like the time I was asked to talk to a group of university students about my career path and an audience member chose to grill me about why my Sāmoan wasn’t up to scratch. Or when people suggest that it’s easy to learn Sāmoan — that all I need to do is “open my ears.”

But, more often than not, my harshest critic is me.

I never made a conscious decision to not speak Sāmoan. I simply didn’t have access to it. Although my family is immensely proud of our Pacific values, and we do all we can to serve our community, like many migrant families, we spoke English at home.

Both my parents migrated to New Zealand in the 1960s. My mother, Maretta, when she was almost nine years old. She was one of seven children to come with my grandparents, Fata and Anuilagi Vaotu’ua, from Afega, Sāmoa. 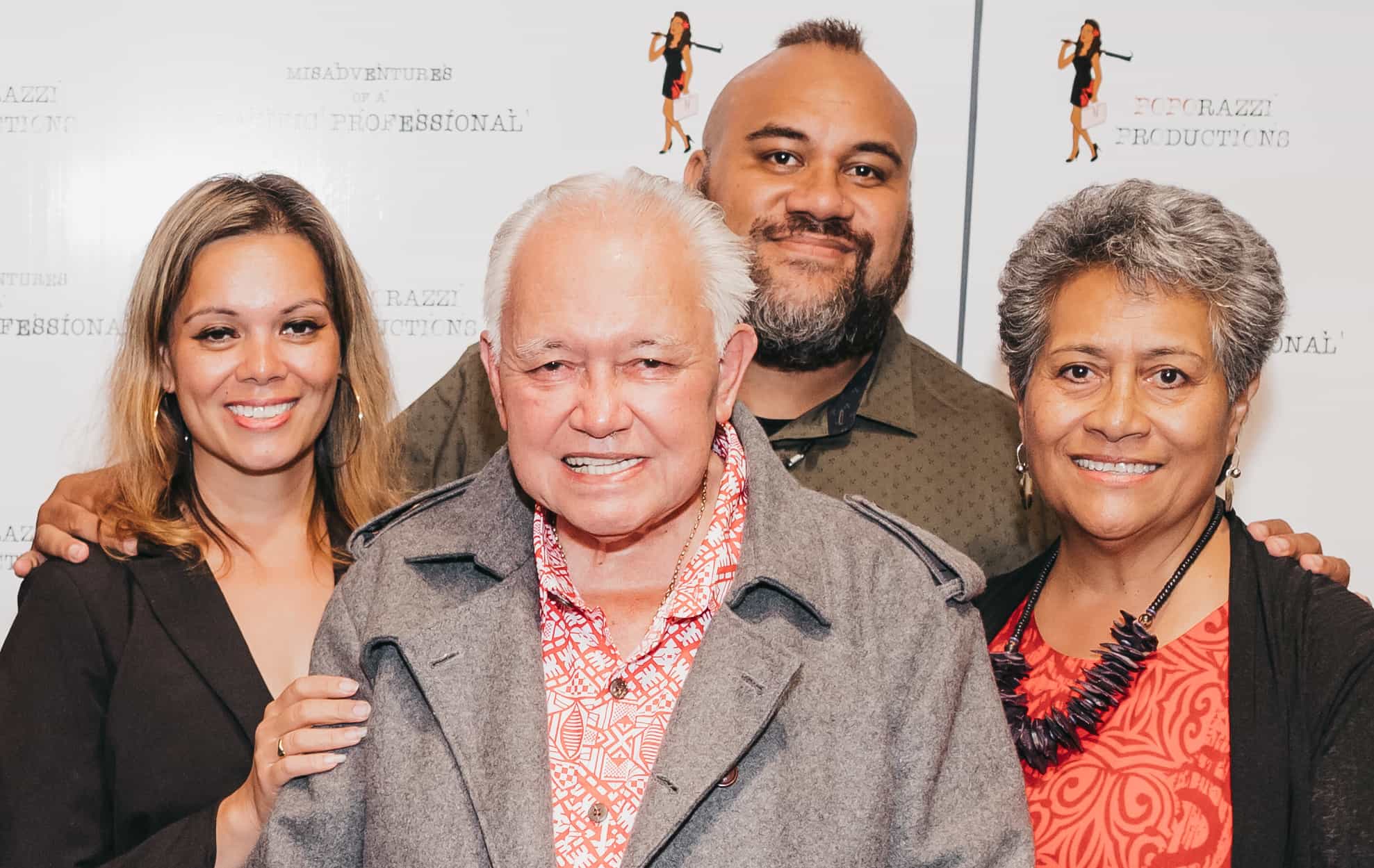 Like many others who came during that wave of migration, my grandparents were told that if they wanted their children to integrate into New Zealand society, they needed to speak to them in English and forbid the speaking of Sāmoan in the home. So that’s what they did. And although attitudes towards bilingualism have since changed, I know that my grandparents did what they believed was best for us at the time.

My father, Arthur Solomon, was born and raised in Fiji, where he grew up speaking English and Fijian. His grandparents had moved from Sāmoa to Fiji in the late 1800s, so while he understood Sāmoan well, he didn’t speak it until he lived in Sāmoa as an adult for two years.

The one person who might have been able to teach me Sāmoan as a child was the grandparent after whom I was named, Nana Kupe, my father’s mother. She was a formidable woman. She couldn’t read or write, but she could speak Sāmoan, Fijian, Fiji Hindi, and English fluently. Unfortunately, she passed away just before my fifth birthday, so I didn’t have the chance to absorb her linguistic abilities. But I attribute my interest in languages and my aptitude for learning them to the beautiful sounds I heard her speak when I was a child.

I’m still trying to become fluent in Sāmoan. I haven’t given up. It’s a challenge, particularly since I’ve lived thousands of miles from any fluent speakers for most of my adult life, but I’m doing the best I can with the tools I have.

To be fair, I’m not completely useless at Sāmoan. Like many learners, my comprehension is much better than my speaking ability and I can quite happily follow a conversation in Sāmoan, and chip in using English. My spoken Sāmoan relies on formulas I’ve picked up from books and the various night courses I’ve done over the years. I love proverbs, but I have trouble keeping up with the slang.

My mother-in-law, Telesia, has been incredibly supportive of my learning. She has persevered where it would have been much easier to switch to English. If I haven’t understood something she’s said, she’ll try again in Sāmoan using simpler words. When you’re learning a language, you need someone with that kind of patience in your life. If I’d been living closer to her for the last 13 years of my marriage, there’s no doubt I would be fluent by now!

Recognising that there are a lot of Sāmoans in our situation, my husband Esera and I founded Samoan 4 Beginners. An online community where learners of Sāmoan can share resources, and support each other without judgment. 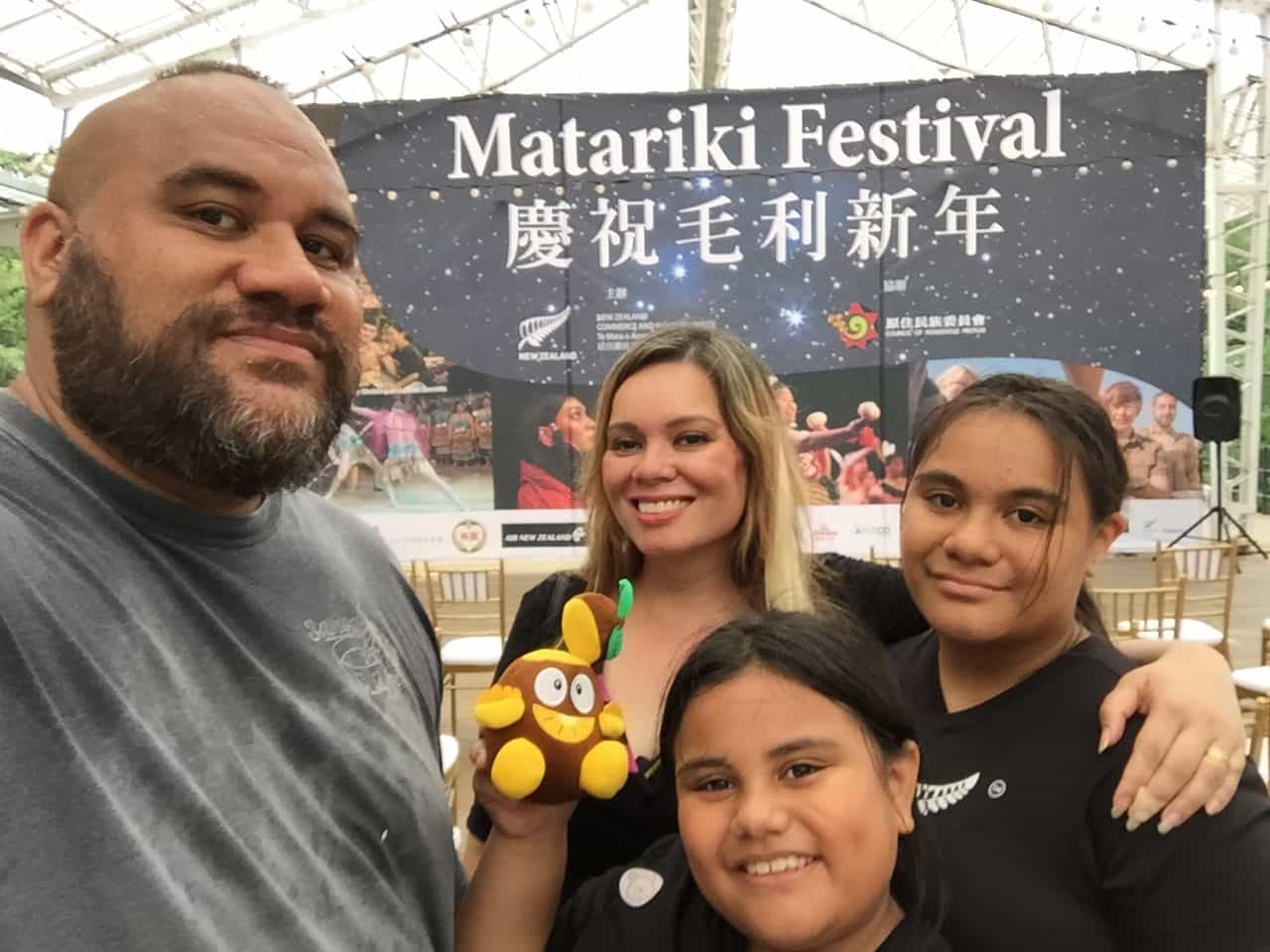 Tupe, Esera and daughters Telesia and Tuasivi pictured at the inaugural Matariki Festival in Taipei which Tupe organised. They’re now living in Fiji where they are all learning gagana Sāmoa and vosa Vakaviti (Fijian).

Here are some of the lessons we’ve learned on our Sāmoan journey.

We need to remove the stigma from learning our heritage languages.

For me, the greatest barrier to learning Sāmoan is psychological. There is a deep sense of shame attached to not speaking my language. This can really hinder your progress. Making mistakes is an integral part of learning a language. I never felt this kind of pressure learning French, Japanese, or Chinese. But there’s a different level of expectation when it’s the language of your heritage and you look the part — but then don’t speak it.

In order to speak it, you must hear it.

One of the most vital skills in learning a language is listening. For Pacific languages, one of the best things we can do is spend time in our communities, listening to the rhythm of our languages. That becomes a bit trickier when living abroad, but there are other ways to achieve this. During my intensive Chinese training, my homework was to listen to a dialogue five times every night. Research suggests that hearing the same sounds over and over again ingrains them into the brain. It also suggests that incidental learning is almost as important as intentional learning. Turning on the radio or TV and having that on in the background while you wash the dishes or fold the laundry can help you get the feel of a language. You start to know what sounds right. Talkback radio, songs, TV, and movies in our heritage languages all play an important role.

We need more resources in our heritage languages.

Obviously, the more funds the government can dedicate to this, the better. But we live in a time where people can make their own graphics, print their own books, and film their own videos on their phones. While more resources are becoming available for Pacific languages, this is a market that’s not in danger of being flooded any time soon. Those who have the knowledge, please share it, far and wide. Be a champion for your language, and pass it on.

Our histories are complicated. Many of us have lost our languages through no fault of our own. Let’s remove the shame from reclaiming our languages. The survival of our language can only be good for our communities. We all benefit when the knowledge is shared.

We learn through listening, and making mistakes repeatedly till we get it right.

Tupe Solomon-Tanoa’i is an international civil servant and former diplomat. Together with her husband, Esera Tanoa’i, she founded Samoan 4 Beginners, an online community for Sāmoan learners, and Poporazzi Productions a production company telling Pacific stories. Tupe, Esera, and their daughters Telesia and Tuasivi live in Suva, Fiji, where they are all learning vosa Vakaviti and gagana Sāmoa. 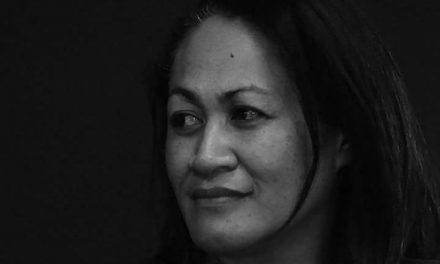 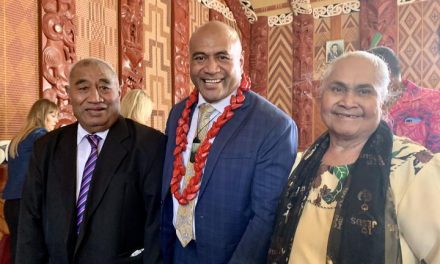 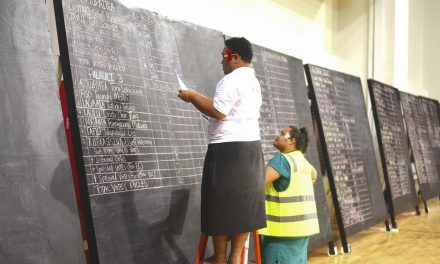