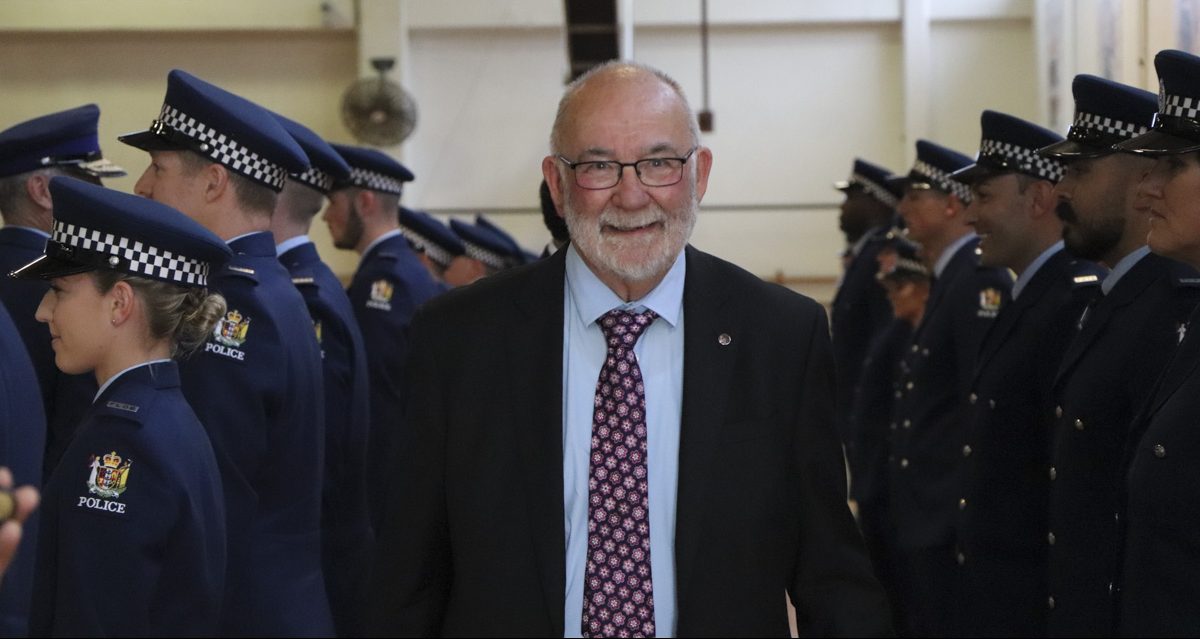 Tā Kim Workman was a policeman during the 1976 Dawn Raids, when the police were pulled into “a political campaign that was racist, discriminatory and unfair”.

In 1976, I was a senior sergeant at the Lower Hutt police station.

I’d been a policeman for 18 years, but I was starting to question whether policing was really the best vocation for me. By ’76, I’d spent two years as a senior sergeant and was due to be promoted to Inspector, but a psychometric test suggested I was more suited for journalism and pastoral care than the police or military.

It was a time of activism — we were in what was known as the Vietnam generation — and Māori claims around land and tino rangatiratanga were starting to break through into the national consciousness. Increasingly, I was finding myself on the side of those activists.

But the final straw for me was the government’s treatment of Pacific overstayers in 1976, which accelerated my decision to move on from the police.

The shortage of workers in New Zealand had seen the reintroduction of assisted-passage schemes for British migrants — which lasted from 1947 to 1973 — and the recruitment of smaller numbers from the Netherlands and southern Europe.

Immigrants from the Pacific, closer to home but less familiar to Pākehā, were also encouraged to enter the country. Workers, and sometimes also their families, from Sāmoa, Tonga and other Pacific Islands, arrived in increasing numbers from the 1950s.

When economic conditions deteriorated in the 1970s, the political and public response to the situation was appalling, and echoed earlier treatment of ethnic minorities.

Pacific Islanders were singled out as potential overstayers, and those with short term work visas were subjected to “dawn raids” in an unprecedented collusion between the government, the Department of Immigration, and the police.

The matter came to a head in June 1976, when the Minister of Immigration, Frank Gill, announced that everyone who had overstayed their immigration permits should register with the Department of Labour by the end of the month. After that date, deportation would be recommended against overstayers who had not registered.

More than 3000 illegal immigrants registered, and about half of those were permitted to remain permanently in New Zealand. The other half were mainly single people and those with a poor work record.

Over and above the 3000 who registered, there were a considerable number of overstayers who remained in the shadows, most of whom were thought to be Pacific Island peoples.

Frank Gill’s next move was to ask the Minister of Police, Allan McCready, to “send officers to places where there was reason to suspect that they would find overstayers”, according to an Evening Post story.

McCready then held discussions with the Commissioner of Police, Ken Burnside — and while what was said was never publicly revealed, the outcome was immediate.

Commissioner Burnside convened a meeting of district police commanders from Christchurch, Wellington and Auckland, and instructed them to become “more deeply involved in inquiries to locate illegal immigrants and overstayers”.

The district commander for Christchurch, Chief Superintendent George Twentyman, told the Press newspaper that as a result of the commissioner’s instructions, “if we see anyone on the street whom we have reason to suspect, naturally we will question him. . . . Naturally, Polynesians, being a lesser segment of the community, are easy to identify”.

Twentyman added that he expected some controversy about the policy, but said it was “a necessity” to have some degree of firmness. “Many people will interpret this as a racist move,” he said, “but we are here as agents of the Crown, to uphold the law.” He said that the new policy would involve detaining persons who did not “look or speak” like native-born New Zealanders.

Special squads were formed to execute the new policy, including one in Lower Hutt. When questioned in parliament about a police circular instruction which required police “to round up all illegal immigrants and overstayers of all races” and which gave them “complete discretion as to the time of day or night when arrests may be made” — Minister McCready said he’d requested a full inquiry and had asked the Police Commissioner to report to him.

Law-abiding Pacific families in the Petone and Lower Hutt region were singled out for this treatment — and, as one of three senior sergeants running the station, I was required to oversee the operation.

I had no control over the information provided by immigration officials, which targeted Pacific families and ignored the larger number of European families who were working on temporary visas.

European and Pacific workers usually had different qualifications and skills, and often did different kinds of jobs. Some European migrants did encounter prejudice. Yet the contrast in public perceptions and treatment of these groups was striking.

Echoing earlier treatment of ethnic minorities, “Islanders” were stigmatised and scapegoated when economic conditions deteriorated in the 1970s. Pacific people were negatively labelled “overstayers”. Many with short-term work visas were subjected to “dawn raids” by the police, even though European migrants were more frequently working on expired visas.

The attitudes of the special squads which had been formed to do this work was appalling. The latent racism, usually judiciously concealed, was blatant and paraded for all to see, with constant talk of “getting the coconuts”.

Members of the special squad felt they could make such comments with impunity, because they knew they were operating under a mandate from Police National Headquarters.

Homes were stormed at night or in the early hours of the morning. Police tactics caused outrage and brought accusations of racism. Sāmoan and Tongan overstayers were singled out — they were stopped in the street and asked for proof of residency.

The Dawn Raids cast a dark shadow over race relations in this country. The raids were humiliating and insulting to Pacific communities and led to a significant deterioration in the relationship between the New Zealand Police and Pacific people, not only in New Zealand but between the governments of New Zealand, Sāmoa and Tonga.

Pacific Islanders only comprised one-third of the overstayers but made up 86 percent of those arrested and prosecuted for overstaying.

I was the chair of the Wainuiomata Māori Committee at that time, and was probably regarded as something of an outlier at the station.

I had also, at the request of the Pacific community in Petone, run weekly sessions for new immigrants on “You and the Law”, where I talked about the criminal justice system and how it worked, the role of Youth Aid and Crime Prevention, and laws with which they were unfamiliar. For example, trespassing on a railway line, drinking outside a dance hall, and the different attitudes that Pālagi have about things like borrowing without asking, and noisy gatherings.

So my mana was fairly high with the community. But the Dawn Raids presented a challenge. Māori were openly upset and let me have it at public gatherings and meetings. Members of the Pacific community were more deferential, but I was approached by community leaders who expressed their concern in a reserved but concerned manner. I had to explain that there was little I could do.

I’m innately conservative, but, looking back, it was a time of politicisation for me.

I made my position clear to my colleagues, and questioned why the police were involved in a political campaign that was racist, discriminatory and unfair.

Where was the moral leadership on the part of the police? Why was the Police Commissioner not seeking refuge in the constitutional arrangements between the police and the government? This made it clear that, while responsible to the Minister of Police for the general administration of the service, the Commissioner of Police isn’t subject to the direction of the minister on matters of operational law enforcement in particular cases or classes of cases.

That overreach by the police minister and the blatant crossing of boundaries was the subject of a paper in 1986 by Professor Gordon Orr — a former Secretary of Justice, Waitangi Tribunal member, and dean of the Victoria University Law Faculty — who described it as “instructive”.

First, the executive, through the Minister of Police, had sought and obtained from the Commissioner of Police prompt and comprehensive action in rounding up illegal immigrants. As Professor Orr commented: “It is difficult to believe that had the Minister of Police not intervened, the police policy towards enforcement of the immigration laws would have undergone such a sudden and drastic change.”

Secondly, when matters appeared to go wrong through an excess of zeal on the part of the police, the minister called on the commissioner to account to him for the police actions.

Thirdly, when eventually a report was furnished by the Police Commissioner to the Minister of Police, he declined to issue the full text.

Fourthly, instructions were given to police constables and others as to the steps they were to take in enforcing or attempting to enforce the law. And they were obeyed — notwithstanding the characterisation by the Auckland chairman of the Police Association of the methods used as being “quite abhorrent to the 1100 members of the Police Association”. Little, if any, scope had been given to police officers to act on their own responsibility.

Finally, Minister McCready, while accepting that he was responsible for the police department, disowned responsibility for its “day-to-day operations”.

This was a time when we needed a Sam Barnett or John Robson at the helm of the police service — someone who was prepared to exercise moral leadership and draw a line at taking arbitrary and unfair action against a class of people. I was deeply disappointed in Commissioner Burnside. This lack of moral certitude contributed to my decision to move on.

There’s an interesting sequel. I applied for a job as an investigating officer at the Ombudsman’s Office. I had no tertiary qualifications, and to my surprise was invited for an interview.

The Chief Ombudsman was Sir Guy Powles, who’d been appointed in 1949 as New Zealand’s High Commissioner in Sāmoa (and then Governor) until 1959. I found out later that Sir Guy’s PA had heard me speak at a meeting of the Catholic Women’s Welfare League, and insisted that I be shortlisted. Sir Guy read my CV and liked the quote: “The success of the Police should be measured not by the absence of disorder, but the presence of justice.”

He noted my work with the Pacific community in Petone, and made his own enquiries. So I was interviewed and, without any tertiary qualifications, got the job.

Dr Kim Workman (Ngāti Kahungunu and Rangitāne) spent nearly four decades in the public sector — with the Police, the Office of the Ombudsman, State Services Commission, Department of Māori Affairs, and Ministry of Health. Following a stint as head of the prison service, Kim became the director of Prison Fellowship, a role he held from 2000 until 2008. In 2006, Kim joined with Major Campbell Roberts of the Salvation Army to launch the “Rethinking Crime and Punishment” strategy. In 2011, he formed Justspeak, and remains as its kaumātua.