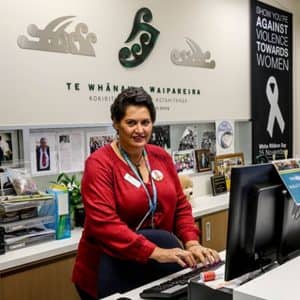 Like many other Waipareira stalwarts, Roimata Hansen has strong ties with the North. But she has led almost all her life in West Auckland — much of it following on from the work of her dad, Denis Hansen, a larger than life character as a sportsman, Māori Affairs officer and then, into his 80s, as a Waipareira kaumātua.

This is an extract from Kia Pū te Wai o Pareira — He Kōrero a-Whānau, a Waipareira publication featuring interviews with some of the people who became part of Te Whānau o Waipareira — the urban Māori authority which grew out of the Hoani Waititi Marae in West Auckland.

My parents came from the Far North. My mum is half Tararā, from Waiharara, Kaimaumau. She had nine siblings, and most of them were born in the gumfields. When mum was about 15, her and her cousin moved to Whangarei and took on a position in a hotel. And after that she came to Auckland.

My dad, Denis, stayed up in Pamapuria until he came down to Auckland when he was about 19.

Mum would do rock’n’roll at the Orange Ballroom on Symonds Street. That’s where she met my dad. I think he chased her, but Mum just didn’t want a bar of him for a while. But then they were married in 1957.

They lived in Ponsonby at first, which is where my sister and I were born. In those days you could subsidise your family benefit to buy a house — and that’s how most of that generation bought their homes.

That’s how we bought our first home in Te Atatu South. From there, we moved around, but we always stayed within West Auckland, which is like our security blanket. I’ve considered moving out once or twice, but no way do you leave the West.

I always wanted to be a nurse, so that’s what I did. Mum was a foundation staff person through her maternity nursing at Waitakere Hospital. Dad always said “local jobs for local people.” He couldn’t understand why people would leave their place to go and work elsewhere.

We knew Mum was Croatian because she always sung us the Croatian songs. She said that’s what her dad used to sing when they were growing up. And her older siblings spoke Croatian.

But the big culture in our home was Māori. Dad would go and help a lot of Māori. He’d bring them home, too. We’d also get taken to Hoani Waititi marae and we’d see other Māori. But it wasn’t until my brothers were in Rutherford, in June Mariu’s reo class, that I tried te reo.

Yet our parents and our grandparents spoke Māori in the home. They spoke te reo because there were things that children were not to hear. After a while, as you grew up, you started knowing exactly what they were saying, because they were saying the same thing basically each time. And we learned those words.

We grew up in our house with All Black rugby players like Waka Nathan and Colin Meads. They were friends of ours and they’d stay the night, because they were all going off to training the next day.

The West Auckland community has changed a lot since those days. So many more different ethnicities here now. Even my grandchildren are going off to learn Mandarin and Cantonese. It feels like now we’re fighting to keep our culture.

My father was made an honorary West Auckland Indian because he took on the Indian people who came into West Auckland, and he taught them the culture. So now when they want to open something, they call on the Māori community. And they say: “That’s what your papa taught us. This is your land, and it won’t work unless we have all the elders there and they give approval for us to have this done.”

Waipareira has been a big part in supporting whānau in West Auckland. In our community, who doesn’t know about Waipareira? And if you don’t know, well, you don’t need to know. “Parents as first teachers” was one of the programmes I did.

And there were other programmes to support whānau. Bringing everybody together. Being there for them. Taking them to their appointments. Being there for the mothers. And not only to do with health and being social. The approach was holistic. It was about all the needs of the family.

Health is about what you eat and your education. Your giving and receiving. How you grow. And your understanding of your family. That’s health to me. The other things that are part of health are church and our Māori culture. You’ve got to do your karakia in the morning and do your karakia at night. It’s all those things to keep your wairua healthy.

The things that make for a healthy community are all about availability to services, like at Whānau House. Accessible and available. Also, the quality of our kai is really important. Back in the past, you had your own vege garden, like my nanny. She had not only the vege garden out the front, but she had all the fruit trees out the back.

Nowadays, though, there’s all this processed stuff. So you’re eating a lot of chemicals when you need fresh food.

Emotional health is all part of it, too. For me, prevention has always been the best cure. Back in the day when I was raising five children, there was no TV, no telephone, no car. But I’d have my family to rally around me, to ease my burden.

My nanny always said: “If you want sleep, you wait until you’re dead. Plenty of sleep when you’re dead.”

So that’s what we were brought up with. And with Dad being all over the place, well, we got used to that. We’d go with him all over the country. At times, Dad never slept and neither did we.

Urban Māori to me means city Māori. It’s not like back in my mum’s day, when she was brought up in the back of beyond in the north. There was nothing there. But she also says that’s where you find tikanga. That’s where you know your place, and you knew when to speak.

But you come into the city, and because some people are making a dollar more than everybody else, they think they’ve got a right to say anything.