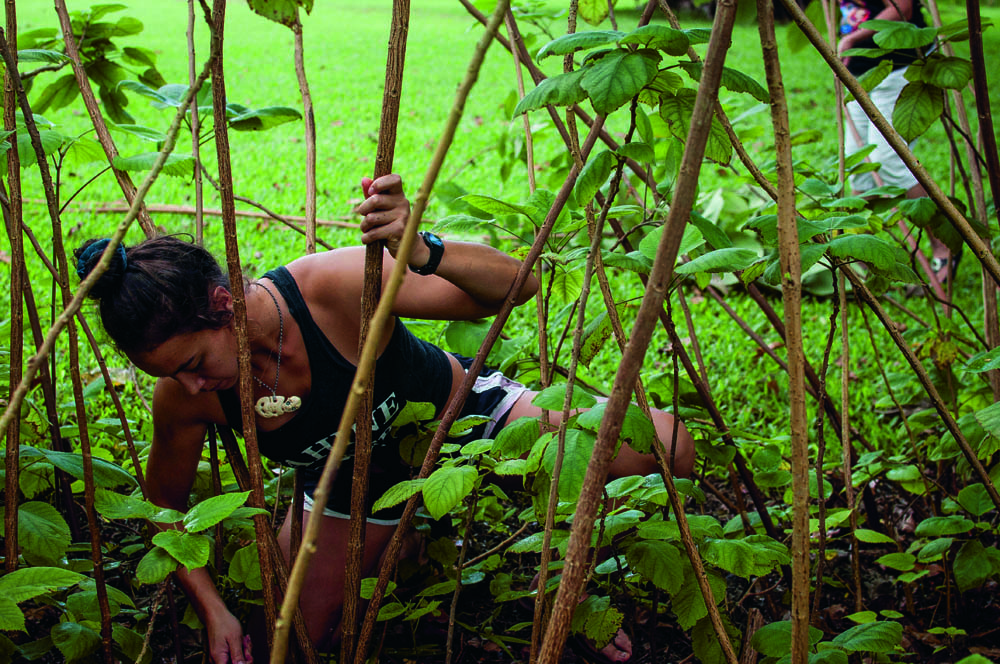 Nikau Hindin harvesting wauke (aute, paper mulberry) from a healthy patch in Hana, Maui, Hawai`i, in 2018. The plant she is cutting is about eighteen months old. Aute groves can get over-crowded so the plants require some attention and pruning. (Nikau Hindin)

Extracted with permission from Crafting Aotearoa: A Cultural History of Making in New Zealand and the Wider Moana Oceania, edited by Karl Chitham, Kolokesa U Māhina-Tuai and Damian Skinner, and published by Te Papa Press.

Most people have forgotten that the paper mulberry plant made it all the way to Aotearoa. Like their Pacific cousins, Māori made barkcloth for kites, clothing, adornment and ceremony. Māori call both the cloth and the plant aute, but as a result of its general extinction in the 1840s there are few mentions of beating aute in the rich oral histories.

The lack of knowledge about Māori aute is compounded by the fact that there are no definite examples of it in museums nationally or internationally. The only remaining physical evidence of its presence in Māori society are the fifteen ancient tapa beaters — patu aute or pāoi — that have been found in swamps around Aotearoa, and the lasting presence of the word “aute” in the language. This cultural amnesia was the catalyst for my exploration of Māori aute, to reawaken this artform and to delve into the unknown space/fabric.

The paper mulberry originated in Southeast Asia and made its way across the Pacific as a canoe plant, carefully stored, cultivated and beaten into cloth. Barkcloth or tapa is ubiquitous in Moana Oceania: it is known as siapo in Sāmoa, hiapo in Niue, kapa in Hawai`i, masi in Fiji, ngatu in Tonga and aute in Aotearoa. This linguistic diversity reflects the diversity of production methods, patterns, textures, uses and meanings.

When I first beat Hawaiian kapa from wauke, my thin strip of inner bark expanded far beyond my expectations, over four times the original width! Once dried it became a fine, soft, pale cloth that could be dyed and printed with `ohe kapala, bamboo stamps. I enjoyed the intimacy of working with carved wooden tools and interacting with the fibre and, finally, printing it with earth pigments and plant dyes.

This transformation from bark to a beautiful cloth inspired me to continue investigating this practice when I returned to Aotearoa. I was overjoyed to discover that there was an aute plant at Waipapa marae at the University of Auckland. I harvested branches of this plant to make small samples of aute. 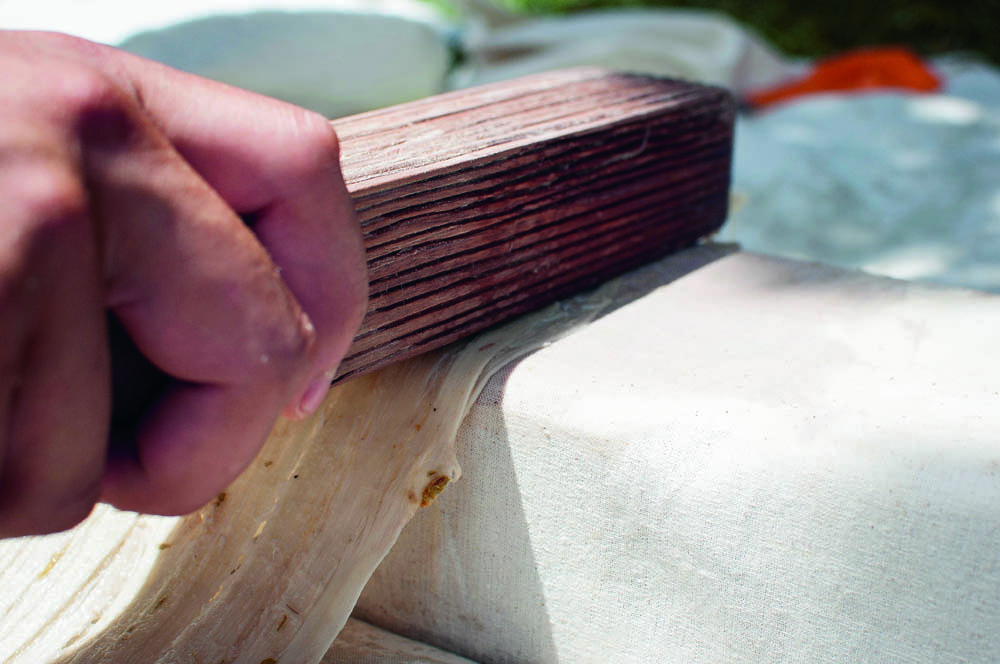 Making aute at the Auckland War Memorial Museum Urban Life Summer Youth workshop in 2016. The width of the beater’s grooves varies on each side. This beater, made from pōhutukawa, is the first Nikau Hindin made and remains her favourite. She made it with stone tools and carved each groove with a shark’s tooth. (Nikau Hindin)

Naturally, crafting patu aute was the first step to making barkcloth. After examining the diverse collection of beaters at the Auckland War Memorial Museum, I created my first beater from pōhutukawa. I made more beaters from any hard wood I could get my hands on, including kauri, mānuka and rimu. I also made a rough anvil, the wooden block used to beat on; usually they are hollowed out to create a beautiful drum-like sound. The beaters have autonomy over the quality of the aute. On every side of the beater the distance between the grooves changes, starting from a centimetre between each carved line and gradually thinning to mere millimetres. The heavier the wood and the finer the grooves, the softer the aute.

I carved the grooves on my first beater with a shark tooth. Uncle Sol Apio, master carver in Hawai`i, makes the tools for his sister, Verna Takashima, master kapa maker. Apio impresses the grooves with a saw edge, placed perpendicular to the beater, and by repeatedly stroking in a downward motion he carves out straight lines. This technique is ingenious; all the grooves are the same width and he can vary the thickness by the grade of the saw. He assures me that many of the Hawaiian beaters held in the museums were made using this technique.

The Māori beaters in the Auckland Museum collections were found in swamps; some are “probably several hundred years old and are therefore among the oldest Polynesian tapa beaters in existence”. They are also very diverse in form — some are more rounded, some have thin grooves and others are wide. The most distinctive beater has a triangular pattern etched into one side that reminds me of how the Hawaiian beaters used to impress a watermark into the cloth. Hawaiians are the only Pacific people who embed a texture into the cloth; they do this because they ferment their wauke, making it very soft. 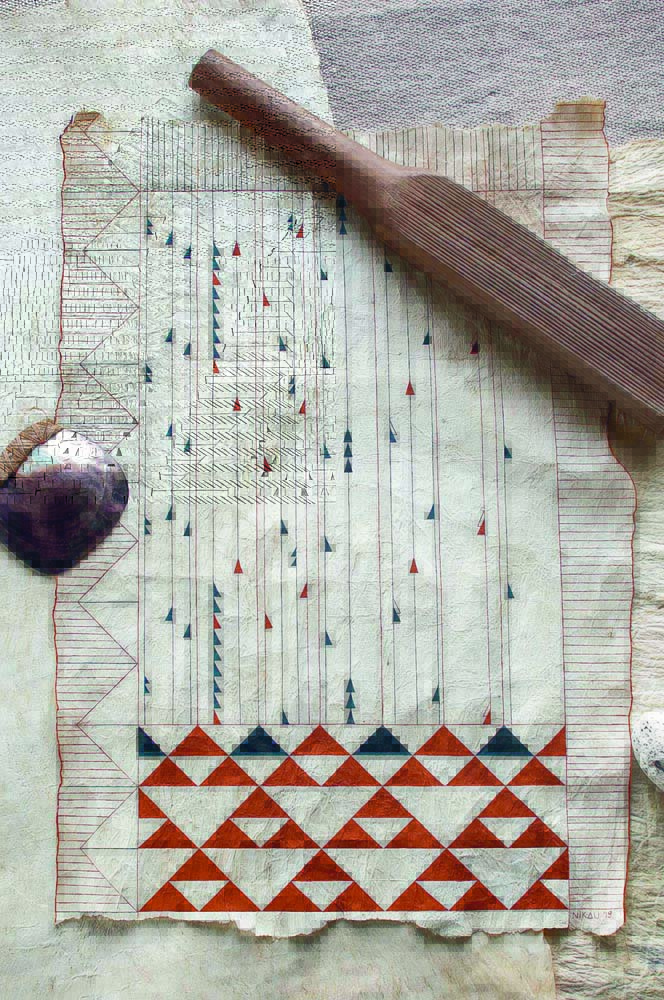 The aute made by Nikau Hindin for this book’s cover is named Kuaka, after the godwit, whose annual 11,000 kilometre migration mirrors the epic voyages of Māori from Hawaiki to Aotearoa. Māori sailed using the star compass, and this painting, which is a star map, is a tool to help learn the declinations of the stars. (Nikau Hindin, Kuaka, 2019.)

According to Wes Sen, who learned from the Sāmoan siapo beater Mary Pritchard, there are over seventeen different methods for making kapa, and each makes a different kind of barkcloth.

Aute is best grown from cuttings so you can harvest the bark from young plants. It takes several years for the plant to grow three to four metres tall and about ten centimetres thick, at which stage it is ideal to harvest. Aute sends out underground shoots so plants can pop up within a four-metre circumference of the original plant.

Barkcloth’s intertwined fibres are loaded with ancestry; it was pounded with song and storytelling and decorated by the earth. Beating barkcloth is one of the many Indigenous practices for which people feel a deep longing to remember and celebrate for the health and perpetuation of their culture.

As the whakataukī says: “By unearthing the tapa beating tools of our ancestors, we embody the ancient knowledge embedded in our blood memories.”

Nikau Gabrielle Hindin, of Te Rarawa and Ngāpuhi descent, first learned the practice of beating aute during an exchange at the University of Hawai`i. She was the recipient of the inaugural Sir Hugh Kawharu Scholarship at the Auckland War Memorial Museum Tāmaki Paenga Hira in 2015. 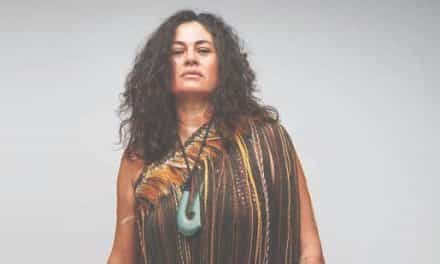 Crafting Aotearoa: What Planet Do You Come From?