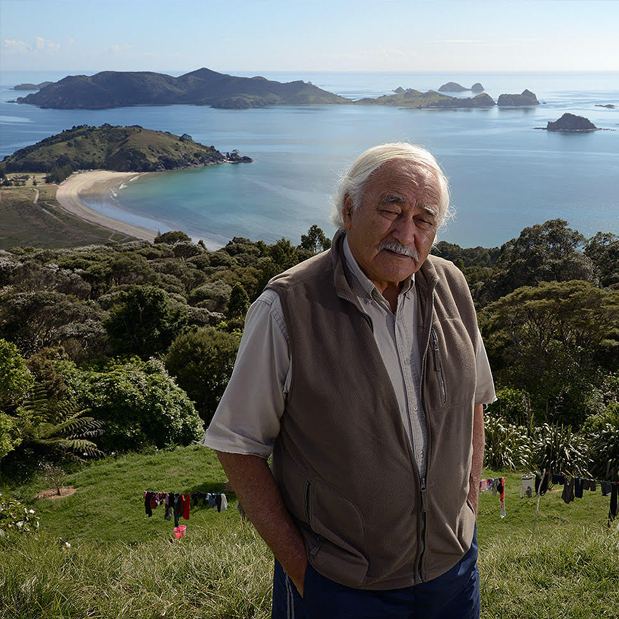 Nuki Aldridge died on October 30 at Kawakawa, and was laid to rest in his hometown of Kaeo. A champion of He Whakaputanga, he was a key source — and an ongoing inspiration — for writer Kennedy Warne.

You have two options when you see a giant wave coming your way. Paddle like crazy and try to catch it, or do nothing and wait for it to crash on top of you.

Ngāpuhi rangatira in the early nineteenth century took the first option, Nuki Aldridge told me when I met him in 2013.

“They could see what was coming,” he said. “A wave was forming on the horizon — the old people called it te ngaru — and it threatened to swamp them.”

The wave was the arrival of newcomers to these motu. The old way of thinking — every hapū for itself — would not be able to cope with the new reality, the flood of settlers — te waipuke o te Pākehā.

A new approach was called for: a confederation of chiefs that could make strategic collective decisions. Through the initiative of the Bay of Islands chief Te Pahi, such an assembly was formed in around 1807.

It called itself Te Whakaminenga o te Hapu o Nu Tireni — the gathering of the hapū of New Zealand. This was the body that declared its sovereignty to the world in 1835, through He Whakaputanga o te Rangatiratanga o Nu Tireni, the Declaration of Independence.

Nuki was telling me this during a break in a Waitangi Tribunal hearing in Kerikeri. The Tribunal was conducting Ngāpuhi’s Te Paparahi o Te Raki inquiry. Ultimately, it would come to the monumental conclusion that the rangatira who signed Te Tiriti did not cede their sovereignty to the Crown.

Nuki was a key claimant witness in the inquiry. A kaumātua from Whangaroa, he brought detailed knowledge of the Whakaminenga, which had its first meetings not far from Whangaroa Harbour.

Nuki took me to the very spot, a place called Te Ngaere, where a tea-coloured stream feeds into the corner of a superb crescent of white-sand beach. In the 1800s, seagoing waka could be paddled into the stream, but today a sandbar blocks the entrance.

We lingered among the reeds and stands of flax and overhanging pōhutukawa, reflecting on some of the great names of Ngāpuhi who stood where we were standing — among them Hongi Hika, one of Nuki’s tupuna.

Perhaps more than any other rangatira, Hongi set the tone of mutual respect and reciprocity that marked the early engagement between Māori and the British Crown — the “conversation,” as Ngāpuhi like to call it.

Nuki was not much impressed by Pākehā historians’ take on the circumstances surrounding the creation of He Whakaputanga.

The consensus view is that James Busby, the British Resident, was the driving force in getting northern rangatira to collaborate, and it needed the threat of Baron de Thierry’s imminent arrival to prod them into action. Nuki scoffed at that notion. The thought that rangatira of the calibre of Hongi Hika needed corralling and organising, like children going on a school trip, struck him as fatuous.

The kōrero his elders had passed on to him was that Te Whakaminenga had been meeting since the first decade of the 1800s to deliberate and plan a response to the arrival of Europeans.

When Busby suggested a written Declaration of Independence, the rangatira saw it as a device that would future-proof their claim to sovereignty. The initiative may have been Busby’s, but the execution was the rangatira’s, to advance their own purposes.

The way Nuki put it in his evidence to the Waitangi Tribunal, was that the assembly of chiefs, Te Whakaminenga, had come together to form a system of government and create a united authority that could protect each hapū from having its mana trampled on. The purpose of He Whakaputanga was to explain those political structures and intentions to future generations.

And strangely enough, history has proved the rangatira right. The Declaration of Independence has been lifted out of obscurity and placed alongside Te Tiriti as one of the country’s founding documents.

Far from being a “paper pellet fired off at the Baron de Thierry,” as New South Wales governor George Gipps claimed, it has come to be seen as an essential statement of how rangatiratanga was perceived and practised by Ngāpuhi.

In another twist, the newly designated national day of commemoration of the New Zealand Wars — October 28 — is the very date He Whakaputanga was signed in 1835.

I sometimes wonder if officials realised the implications of picking that date for remembering the wars. By tying the commemoration of battles over land and political authority to a pre-emptive declaration of Māori sovereignty, the government draws attention, year by year, to an unresolved tension: if the Treaty was not an agreement to transfer sovereignty to the British Crown, what are the implications for today’s nation state?

Nuki had a gentle, genial way of discussing these weighty matters, but always affirmed their critical importance. In his opening remarks to the Waitangi Tribunal, he bluntly declared: “He who fails to assert his rights has none.”

He spoke out against the political power imbalance between Māori and Pākehā, and regretted that historical accuracy had been a casualty of that disparity. “The truth is held by him who holds the smoking gun,” he told the Tribunal, “and history is accordingly controlled by that power.”

One of my strongest memories of Nuki was the morning of October 28, 2013 — “Independence Day.” Under a star-studded sky at five in the morning, a couple of dozen people had gathered around the flagpole at Te Tii marae, in Waitangi. Nuki had invited a New Zealand Geographic photographer and me to attend.

In a short kōrero to the group, Nuki said that not so many years ago hardly anyone showed up to commemorate the signing of He Whakaputanga. He mentioned an old blind man who served as caretaker of Te Tii. Sometimes he was the only one present. “Pita Apiata — all alone in the house so he could keep the 28th of October,” Nuki said.

We sang two verses of How Great Thou Art in Māori, and a tūī started calling in the nearby trees, still vague smudges in the darkness. The only light was a half moon, the street lamps on the Paihia road, and a torch being shone resolutely on the flagpole.

“Okay, let’s fly it,” said Nuki, and the flag was pulled slowly upwards. The torch beam followed it as it rose. At the top of the pole a breath of wind caught it and the flag unfurled.

“Haere mai, te kara,” a few voices murmured at the sight of the familiar red, white, blue and black colours of the United Tribes flag, chosen by Ngāpuhi chiefs in 1834 — like He Whakaputanga, one of their first official acts as a confederation.

We were facing south, and as the ceremony concluded, a shooting star inscribed an arc near the Southern Cross. Later, some people commented that it was a tohu, a sign, a cosmic endorsement of Ngāpuhi’s claim: “We never ceded sovereignty.”