A Voyage Round My Father 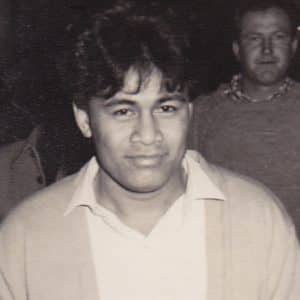 I was at Carl’s Jr on Queen Street when I got the news. Lady Gaga’s ass was hanging out of the sunroof of an SUV in a video on a giant TV screen. Halloween revellers laughed and lurched outside.

I wept over an unopened mushroom burger.

At a small impromptu service two days later I was struck by the realisation that none of my friends ever met my father. Yet all of them knew he was a significant figure in my life.

I painted a brief picture of him during the service, even though my actual knowledge of the facts of his life was scant.

By the time I was born, my father and mother were no longer together and he was in another relationship. We never lived together — ours was not an especially close relationship. But he always made a point of coming to see me every time I stayed with my younger half-brother in Brisbane, where he moved from Christchurch in the ‘90s.

Since our last meeting in 2012, my father was diagnosed with an aggressive form of Alzheimers. The occasional photo on Facebook showed a man who was slowly disappearing, a shadow of the robust man I pictured in my mind.

In the end he succumbed, quickly, to pneumonia in both lungs.

If you add up the minutes, the hours, my father and I spent together, I’m not sure that we spent more than a week together. But despite — and more so because of — his absence, my father cast an enormous shadow over my life, as inescapable as it was undeniable.

Those who know my work as a writer will know that the illegitimate son/absent father theme is something I have picked over in my work (Sons) and returned to again (My Name is Gary Cooper) and again (At The Wake): a veritable stock-in-trade.

Sons, the play that launched my career as a playwright, was my own version of John Mortimer’s Voyage Round My Father. It was based on the difficult time I had when, as a 19-year-old, I tried to initiate a relationship with my father. I’d heard he was dying and went to see him. Growing up, I hated him, but I was taken aback by his charisma and sense of humour.

Having been raised as a virtual Palagi by my Palagi mother and grandparents, I found myself trying to negotiate both him and, by extension, the Samoan culture, since both were completely foreign to me. Not only that, but they were minefields, and I stepped on a mine more than once due to a messy combination of teenage self-absorption, cultural ignorance and impatience.

When my father didn’t officially and immediately welcome me into his family I took matters into my own hands. I got to know my half-brothers without revealing my true identity, setting off shockwaves within both our families. It’s a decision that I regret to this day.

The first draft of Sons was very much a black and white story about goodies and baddies. The villain of the piece was clearly my father.

Life, of course, isn’t nearly so neat. Writing Sons helped me see my father in a different, less judgmental light. I realised my father was only human. That we all make choices. That those choices have consequences.

Do I hate some of the choices my father made? Absolutely. But do I hate the man himself? Absolutely not.

Because, aside from a rare blood-clotting disorder called Antithrombin III deficiency and an ability to write father/son conflict blindfolded, my father gave me something profound, something that I keep circling back to in these days after his death.

My father gave me peace.

Here’s the thing: if you grow up with an absent parent, most likely you will occasionally have fantasy conversations in your head.

Sometimes those conversations will be accusatory. Sometimes they will be placatory.

But six years ago my father gave me the fantasy conversation where he said everything I could have ever wanted him to say to me. He acknowledged how my life must have been without him. He apologised.

That conversation was a gift. Because everything I felt — all the anger and hurt and resentment — left me.

For that I will always be grateful. And for me, that will be his legacy and my testimony.

After my father died I reached out to Albert Wendt for a quote. Albert is my father in the literary sense of the word. He came back with this Samoan classic: Amuia le masina, e alu ma toe sau.

Envy the moon: it goes and returns.

If my father could come back one more time like the moon, I would thank him. I never did get the chance to in life.