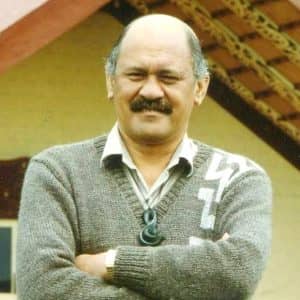 Tanara Whairiri-ki-tawhiti Ngata — or Whai, as he was known — didn’t really like me, and it’d be fair to say he had cause.

I was an untrained rookie journo when I first met him on the job at Te Karere back in 1983. I knew I was in trouble when he asked me to find some library footage of Kara Puketapu, and I confessed that I didn’t know who he was (the head of the Department of Māori Affairs at the time) or what he looked like.

The scathing look he gave me is seared into my brain.

He had the unfortunate role of helping to train me, then working with me and finding answers to my dumb questions. So yeah, he definitely had reason. As soon as he came around the corner into the newsroom, in his suit, dark glasses and clutching his briefcase, I could feel my spine straightening up.

“Mōrena Whai!” Me, being bright and cheery.

“It’s not a good morning unless you have a story.” Him, being grumpy and scary.

I stopped saying good morning after that.

There were endless nights at the Aurora Tavern in Auckland city, where he loosened up after a few beers to lecture me in a more kindly fashion and tell me war stories. We’d share a cab sometimes, and when we reached his home, he’d cut a rose from his wife Geraldine’s garden and present it to me before sending me off into the night.

So he could be sweet.

He had links to Te Whānau-a-Karuai, Te Whānau-a-Rakairoa and Te Aitanga-a-Mate, hapū of Ngāti Porou, and also to Ngāti Rongomaiwahine and Ngāti Rakaipaaka of Nuhaka and Mahia, and Rongowhakaata and Ngāi Tāmanuhiri of the Gisborne area. Through his mother he was also affiliated to Te Whānau-a-Apanui, Te Whakatōhea and Te Arawa.

Whai was a trained teacher and also worked in public relations at the State Advances Corporation, a finance company. But he hit his stride in 1968 as a reporter for the Auckland Star and, later, as a freelance writer and editor.

He joined Radio New Zealand in June 1975. It was a pivotal time for Māori and a fascinating time for a Māori journo. Māori language was on the verge of dying out, Waitangi protests had exploded, Whina Cooper was leading the Land March, and Joe Hawke was gearing up for the Bastion Point occupation. Whai knew the antagonists and protagonists and was on the ground reporting it all.

In 1983, he moved into television reporting, with his relation Derek Fox, to kick off Te Karere. It was a tricky manoeuvre. Whai and Purewa Biddle would finish their work for RNZ’s Māori unit in Papatoetoe, then head over to Television New Zealand in the city to put together the daily five-minute Māori language bulletin with Derek. Story planning would continue over a lot of drinking after the show.

It was news that was relevant and important to Māori, in the Māori language. Of course, its Māori fans were legion. No one was allowed to change the channel in the Ruatoria pub at 5:55pm when Te Karere came on. If you wanted a beer, you had to wait.

Te Karere‘s opponents were just as numerous and fanatical. Telephone complaints to TVNZ were logged and distributed to all departments. The reaction of some Pākehā viewers was outright hostility that never seemed to wane in vitriol or magnitude. It was an eye-opener for me, but we didn’t pay much attention to it. We had a programme to put to air.

Inside TVNZ, the hostility was more carefully masked. Those who felt the need to voice their opposition to anything Māori would be taken on by Whai and Derek. Sometimes the duelling duo would turn the tables on their colleagues and pick a fight anyway. Because it was fun.

But there were times when the fights were legitimate — because a few of our Pākehā colleagues did some really stupid things.

For instance, when the Raglan Golf Course was returned to Eva Rickard and the people of Tainui Awhiro after more than a decade of protest and tireless campaigning, the Pākehā news bosses told Whai, the Māori reporter who could speak excellent English, that he couldn’t fit on the four-seater plane that was hired to fly to Raglan to film the story. Only the two-man camera crew and non-Māori speaking Pākehā reporter, Rod Vaughan, could go. The pilot, by necessity, had the fourth seat.

That was a bad day for us. And it epitomised the level of stupidity of TVNZ.

By 1986, Whai had joined Ernie Leonard to establish TVNZ’s Māori Programmes department. His baby was Waka Huia, a programme that had its beginnings in Ernie contemplating the depth of loss to Māori and Aotearoa if the planes carrying kaumātua to the Te Māori art exhibitions in the USA (in 1984) had crashed on the way.

It wasn’t very diplomatic reasoning but the point was well made.

Whai produced many episodes. He’d cajole the shy ones, argue with the suspicious ones and be patient with those who wanted to start with a whakapapa that went back to Adam and Eve. Filming was as basic as: “Here’s the talent, let him talk and shoot it!”

Thirty years later, the lack of pretty pictures and snazzy editing is forgiven for the gift of knowledge, history and information that’s been retained in those programmes.

Whai did other groundbreaking stuff too. All of it with an eye on putting Māori language, culture and people to the fore.

This included his dad’s dictionary. In the 1960s, Hori Ngata spent his lunch hours and most Sundays working on an English-to-Māori dictionary, inspired by his students studying Māori at Auckland University. He beavered away at this for more than 26 years.

When he retired, others helped out, including Whai and his mum, and Hone Apanui, an editor of school publications for the Ministry of Education. They formed a working party, Te Komiti Arohi, which had dictionary meetings in Ruatoria, Hicks Bay, Wellington and Auckland.

Hori died in 1989 before the dictionary was completed, but Whai finished it. In 1993, Ngata’s English–Maori Dictionary was published. It won the award for Best Non-Fiction Book at the 1994 Montana Book Awards.

Whai worked on the prime-time series The New Zealand Wars, with producer Colin McRae and historian James Belich, another award-winner despite TVNZ’s expectations that it would put viewers to sleep. In fact, ratings for the first episode were huge.

He also continued to act as TVNZ’s rep in the Māori world — negotiating, for instance, coverage of the tangi for Whina Cooper and the Māori queen, Te Atairangikaahu.

In 2007, Whai got his own award. He was made an Officer of the New Zealand Order of Merit for services to broadcasting and television.

Whai and I never worked together again but I’d bother him now and then with a phone call. His terse “What do you want Wena?” didn’t phase me as it used to when I was younger. I like to think that the other Māori broadcasters he shaped and moulded over the years didn’t wimp out, and were also able to hold their own because of his uncompromising nature. We needed that — and we needed him.

I’ll miss his grumpiness all the same.

Whai Ngata was born in Ruatoria, the great-grandson of the Ngāti Porou politician and scholar, Apirana Ngata. He trained as a teacher in Auckland, and then spent time working at the State Advances Corporation, in public relations, and on the family farm in Ruatoria, before embarking on a journalism career that spanned four decades.
Whai joined the Auckland Star in 1968, and spent three years there before freelancing. After a period editing magazines, he joined Radio New Zealand in 1975. In 1983, he joined Television New Zealand to spearhead Te Karere with Derek Fox and Purewa Biddle. He was initially involved with Koha, a 30-minute weekly programme, mostly in English, which signalled the start of regular Māori programming, in 1980. In February 1983, Te Karere, the first Māori language news programme in Māori, premiered on our screens, hosted by Whai Ngata and Derek Fox.
In 1986, Whai was recruited by Ernie Leonard to start up TVNZ’s Māori department, which sought to build up the experience of Māori producers and directors. With help from the Department of Māori Affairs, TVNZ established a training programme, Kimihia, which targeted Māori for producer training.
A year later, in 1987, the Māori Affairs Department, the Ministry of Education and TVNZ established the reo-only, hour-long magazine programme, Waka Huia.
In 1994, Whai became Head of Māori Programmes, overseeing funding proposals, production budgets and staffing of programmes for Māori and Pacific Island people. As well as his continuing involvement in Te Karere, Waka Huia, and Tikitiki, he was instrumental in creating the Māori current affairs programme Marae (launched in 1992) and youth show Mai Time (which debuted as part of Marae, before becoming a standalone show in 1996).
Whai was General Manager of Maori and Pacific Programmes until his retirement in 2008. He was named an officer of the Order of New Zealand Merit in 2007.
He also completed the English-Maori Dictionary, which his father, Hori Ngata, dedicated much of his lifetime to collating. The Ngata dictionary is a standard textbook for Maori language students today.
Whai died on Sunday, 3 April, after a long illness. He was 74.