Māori bashers and the morality of the media who empower them 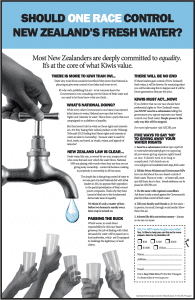 There I was, a fortnight ago, strapped into a plane bound for Whangarei, unfolding my Sunday paper and settling in for a leisurely read. And there, on the front page, was a huge shot of Mihingarangi Forbes.

That’s nice, I thought. Must be about The Hui, her new show on TV3. I knew that was coming up after she — and a number of others — had bailed out of Māori TV.

Then I read on. Something about clothes missing from Māori TV. Oh, come on.

For a moment, I wondered if there was a real story there. But, no. It was a beat-up. A non-story. And definitely not a front-pager.

It was doing my head in. So I turned the pages. And then I saw it. It’s just as well the pilot started the engine at that moment. It helped drown out my expletive when I saw this:

Catchy headline. Forget the beat-up on the front page. This was the full Monty of Māori-bashing. And it wasn’t a story or an interview. It was a large advertisement. Money had actually changed hands. The New Zealand Centre for Political Research had paid the Sunday Star-Times to run this bile.

Later, I discovered that the NZ Herald and a whole bunch of other newspapers (weekend, metropolitan and community papers) had also been paid to run the same garbage. Blood money.

Hang on. An outfit with a name like the New Zealand Centre for Political Research sounds respectable enough. Probably really well informed and politically neutral, right?

Well, no. That’s way wide of the mark. For a start, just look at the advertisement. It’s a breathless recital of inflammatory phrases.

No academic discipline here. No political neutrality. No measured tone. In fact, this is very Donald Trump. Same style of racist overtones and the same strategy of repeating lies so often that gullible types start believing them to be true.

The Pākehā in me is amazed and offended that they think I’m dumb enough to fall for their loony rhetoric. And the Māori in me is angry at continually being framed as the baddie.

So let’s pause for a moment to see who’s paying the papers to parade this stuff. No surprise there. The founder and director is Muriel Newman who was an ACT MP for nine years. She finished in parliament in 2005. But, by that time, it was clear that, like many other politicians, she didn’t have much grasp of the Treaty — or, apparently, much interest in understanding it.

It’s the same mentality that gave rise to Don Brash’s Orewa speech in 2004 when he argued that Māori are over-privileged. And it’s the mindset that gave rise to Iwi vs Kiwi, the shamefully divisive and toxic campaign slogan that the National Party used leading up to the 2005 election.

The Iwi vs Kiwi line was designed to exploit Pākehā fears at the height of the foreshore and seabed drama. Naturally, they weren’t interested in exploring the whakapapa of the kaupapa — namely “the wanton issuing of marine farm permits by the Marlborough District Council in areas within the Marlborough Sounds of special significance to local iwi,” as Wiremu Stafford explained. They were mainly interested in toppling the Labour government and sticking it to Māori.

When seven Marlborough hapū sought clarity on their rights and interests, the NZ Marine Farming Association as well as the district council, Port Marlborough Ltd and Attorney General all mounted opposition.

Talk about “race-based” control. It was all about maintaining the status quo. Keeping iwi locked out.

In that hallowed space between “everyone owns the water” and “no one owns the water”, some clever little water bottling companies are laughing all the way to the bank. Or to China, as in the case of Oravida, which has a permit from the Bay of Plenty Regional Council to extract and export hundreds of millions of dollars of fresh water, all for just $500 a year.

Heck, that’s the cost of a tanker filling up our empty rainwater tank. Despite being in the PM’s electorate, we can’t even hook into the town supply to get at the fresh water. I suppose sometimes it’s about where you are and who you know.

Iwi weren’t involved in the decision made by Environment Canterbury and the Ashburton District Council, which will see a potential 40 billion litres of water sucked out of the town aquifers. Yet the mere thought of iwi potentially making money out of fresh water sends the right-wingers into hyperventilation.

Now, here we have Muriel’s “think tank” with its grandiose name and a “firm belief that informed citizens are at the heart of a well-functioning democracy.”

Okay. How’s this as one example of the centre’s help in “informing” New Zealand citizens?

“We think it’s only a matter of time before iwi demand a royalty every time a tap is turned on.”

Really? Based on what historical example?

But let’s put aside the lofty goals and the dodgy credentials and behaviour of this political research centre. Let’s look, instead, at the professional morality of the newspaper editors who agree to run advertisements like this.

Jonathan Milne, the editor of the Sunday Star-Times, and I, have exchanged a few emails on the subject. I’d asked him about the rationale behind the decision to run the adverts when it’s clearly extremist propaganda. On top of that, it’s promoting racial division — and exploiting the fears of some uninformed Pākehā.

Jonathan’s response was partly to say that he’d run it past the Advertising Standards Authority (ASA) who had noted the advertisement’s “robust advocacy”, but had given it the thumbs-up. And he suggested that, if we still felt the advert wasn’t “satisfactory”, we could lay a complaint with the ASA’s Complaints Board.

But he was also quick to point out that, whereas journalism “demands” balance, advertising may be a single viewpoint. And, so far anyway, he’s not inclined to provide editorial content to “complement, contradict or contextualise an advertisement.”

I don’t know that those comments deal with the nub of the problem. As we all know, none of our mainstream Pākehā media organisations have the staff to provide a balanced coverage of racial issues. And it’s not an even playing field either when it comes to advertising. There are enough affluent rednecks to keep funding their prejudiced campaigns.

So the misinforming and the imbalance seem guaranteed. And the advertising campaign keeps rolling on.

You’d like to think that New Zealand’s media bosses wouldn’t always turn to the ASA for guidance when a toxic advertisement came from a suspect source. It would be more wholesome and helpful if those bosses were to make moral judgments themselves — and act on them, even when that could cost a few dollars.

Comments on this article are now closed
© E-Tangata, 2016

To make a complaint to the Advertising Standards Authority, see here.