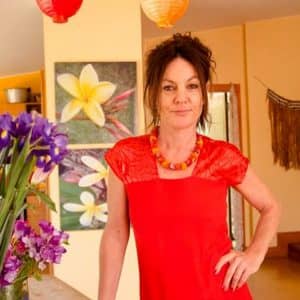 Tamsin Hanly has been in the news lately because of what she’s doing to help ensure that our kids don’t miss out on New Zealand history. You might assume that it’s the responsibility of the Ministry of Education to see that all school students learn about our country’s past and, in the process, come to understand our present-day society.

The ministry says that’s not so. Instead, the official line is that it’s up to each board of trustees to decide what should be in a school’s curriculum. Tamsin doesn’t see that as an especially effective way of educating each new generation of Kiwis. So she set about producing a history curriculum and resource material — to help teachers teach the history that most of them had never learned. She has now published that in the form of six books, funded by a mortgage on the family home. And that’s had Dale wondering why Tamsin has stuck with such a demanding project.

Kia ora Tamsin. This undertaking of yours has been really substantial. So you must’ve felt strongly about the way the school system allows history to be so badly neglected in our schools.

I’m Ngāti Pākehā with an Irish and English whakapapa. And I went to mainstream schools in Auckland all my life. I loved school, too. But, when I left, I knew nothing about things Māori. Nothing about Māori people, Māori language or the Treaty. No awareness of our real history.

But then, when I was 18, I hit Bastion Point — and that started me on a journey, which I’m still on, to learn about te ao Māori, te reo Māori, the Treaty and about being Pākehā. And to learn accurate histories.

So I decided to become a teacher and help young children avoid going through what I’d gone through.

My education hadn’t prepared me to be an informed citizen who could understand, or be actively involved in, the civil issues of the day. Certainly not anything to do with the Treaty. I felt angry that the education system had let me down.

And one of the consequences has been the six books I’ve just published to help our teachers. It’s called A Critical Guide to Māori and Pākehā Histories.

That course of action was quite a feisty response. I suspect that you’ve inherited at least a few feisty genes from your parents. Can you tell me a bit about your family?

My dad, Pat Hanly, was an artist, a famous painter, who died in 2004. And Gil, my mum, was, and still is, a photographer. She’s mainly been a documentary photographer and she’s covered many of the protest movements, especially the Māori struggles. So we grew up in an artistic, creative and also a quite political sort of family. Both my parents were pretty active politically. My mum still is. We lived in an old villa in Mt Eden and we were all involved in the issues of the day. I remember going on protest marches when we were very little, up and down Queen Street.

And our children have also had a very politicised upbringing. They’ve been involved in social justice issues since they were babies. Now our mokopuna are in kōhanga and kapa haka. I have two whāngai Māori sons and a Pākehā daughter by birth. We’ve got a lovely complicated family.

Earlier you spoke of your decision to become a teacher. So that’s what you’ve been doing through the years?

Yes. I taught for 25 years in both mainstream and Māori pathways. And 17 of those years were at Newton Central primary school in Auckland. When I was there, I taught a good deal of New Zealand history. But I didn’t know of anyone else who was teaching that sort of content.

So I began doing a Masters degree with the question: “Are primary school teachers teaching New Zealand histories?”

Of course, the answer was mostly not. Or teachers were mostly telling a standard, colonial story — a collection of inaccurate histories.

So, with those results from the MA, I went back to Newton Central and wrote a curriculum for our staff. And that’s been in operation at Newton Central since 2009. All the photos in the books that we’ve just launched, come from those years of work at Newton.

In 2012, I wanted to get this curriculum into other schools too. So I worked part-time at Auckland University in the Faculty of Education, Māori Department. I work there now. And I began to rewrite the curriculum in a more academic way.

That’s when I took the time to read Anne Salmond and James Belich, as well as Michael King, Ranginui Walker, Claudia Orange, Judith Binney and Ingrid Huygens — all these amazing historians. And I spent four years writing this curriculum.

In that time, I did apply for funding, but I gave up in the end. I went four times to see the Ministry of Education to ask them for funding. Their answer was that they don’t fund curriculum writing. They told me to go private.

So that’s what we were forced to do. We put a mortgage on our family home — and, over four years, we’ve produced these six books for the teachers who don’t know much about New Zealand history.

It’s really a beginner’s guide. And it goes from the the Māori origin story — right through to their arrival here in Aotearoa and becoming tangata whenua.

Next, I suppose, the story moves on to the events that led to the Treaty of Waitangi?

Unit 4 covers what’s in the Māori text of the Treaty of Waitangi and explains that’s actually the document that the two sovereign groups signed and agreed to — allowing Pākehā to live here but also ensuring that Māori sovereignty continued. In this unit there’s also an explanation about how the English version was introduced. Its interpretation was that Māori had ceded sovereignty to the Crown — which they hadn’t.

Then Unit 5 looks at Pākehā culture and also at the Pākehā laws that have been used to transgress the Treaty agreements. And Unit 6 is the final book which goes from the first encounter that Māori had with Pākehā in the 1820s, right through to the TPPA.

It’s a really comprehensive timeline. And it’ll help teachers become well enough informed to teach their kids what they’ve probably missed out on themselves.

All ethnicities in New Zealand should know this basic historical information.

I wonder what reaction you’ve had from your peers in the teaching profession. Some of them may have seen you as a leftie. Or a liberal. Or unduly pro-Māori. And perhaps some may have felt that the material should’ve been shaped for high school students.

Well, I’m a primary school teacher and I know primary school teachers who’re not covering this content at all and really need guidance. But the whole package is designed so that secondary schools — and early childhood centres too — can do the same professional development for their teachers. When teachers read the six books, they can understand what’s happened in this country and why it’s happened.

At the moment, most of our citizens don’t know that — and neither do most of our teachers. And they don’t understand why there is this ignorance. One reason is that it’s part of colonisation. It’s absolutely deliberate that we don’t learn the accurate histories of our country.

As for criticism from my peers — well, I haven’t hit any sort of negative feedback. If people aren’t interested, they generally will just say that. And I don’t persevere after that. You can’t force them. But, if the senior staff in our schools can commit their teachers to read this material, there’ll be some transformations in our educators and in our classrooms.

Back in the day, there were some principals and teachers who were opposed to the Treaty workshops. And perhaps there’ll still be those who don’t see the point. I hope those attitudes have changed. But how damaging is it for us to do nothing and keep perpetuating this inter-generational ignorance?

Just over a year ago, our Prime Minister, John Key, said that, in his view, “New Zealand was one of the very few countries in the world that were settled peacefully.” And the media didn’t call him out on that. But when I heard him, I thought: “Wow. That’s our Prime Minister. He doesn’t know our history.” So, even at our top level, you’ve got a person who’s ignorant about that. And that’s a terrible situation because his ignorance impacts on all the decisions he makes.

Then, recently, I saw Hekia Parata on television speaking about the petition to include the New Zealand Wars in the school curriculum. She said they wouldn’t put the wars in the curriculum because that would stop schools being able to decide for themselves what should be taught.

That stance is quite common in neo-liberal governments where they shift the responsibility for determining curriculum from the state to the school boards and the communities and teachers. To some degree, that’s useful because it does allow schools to make choices.

But the research that Mark Sheehan from Victoria University and I have done demonstrates that schools avoid what they think could be controversial — and they avoid anything they know little about.

They choose safe topics. They don’t do colonisation. Under the primary school curriculum, the Treaty isn’t mentioned. The two worldviews that created the Treaty aren’t mentioned. Nor are the years since 1840. There are primary schools that don’t cover anything to do with Māori-Pākehā relationships. And that neglect can carry on into secondary school.

Most other nations make a priority of teaching their own history. But, here in Aotearoa, our kids are likely to know more about Kate and William and Harry than they do about the Kingitanga. Under the present system, we’re producing continuous generations of ignorance — and historical amnesia. It really is a desperate situation.

A Critical Guide to Māori and Pākehā Histories