Sarah Hirini: Back to work 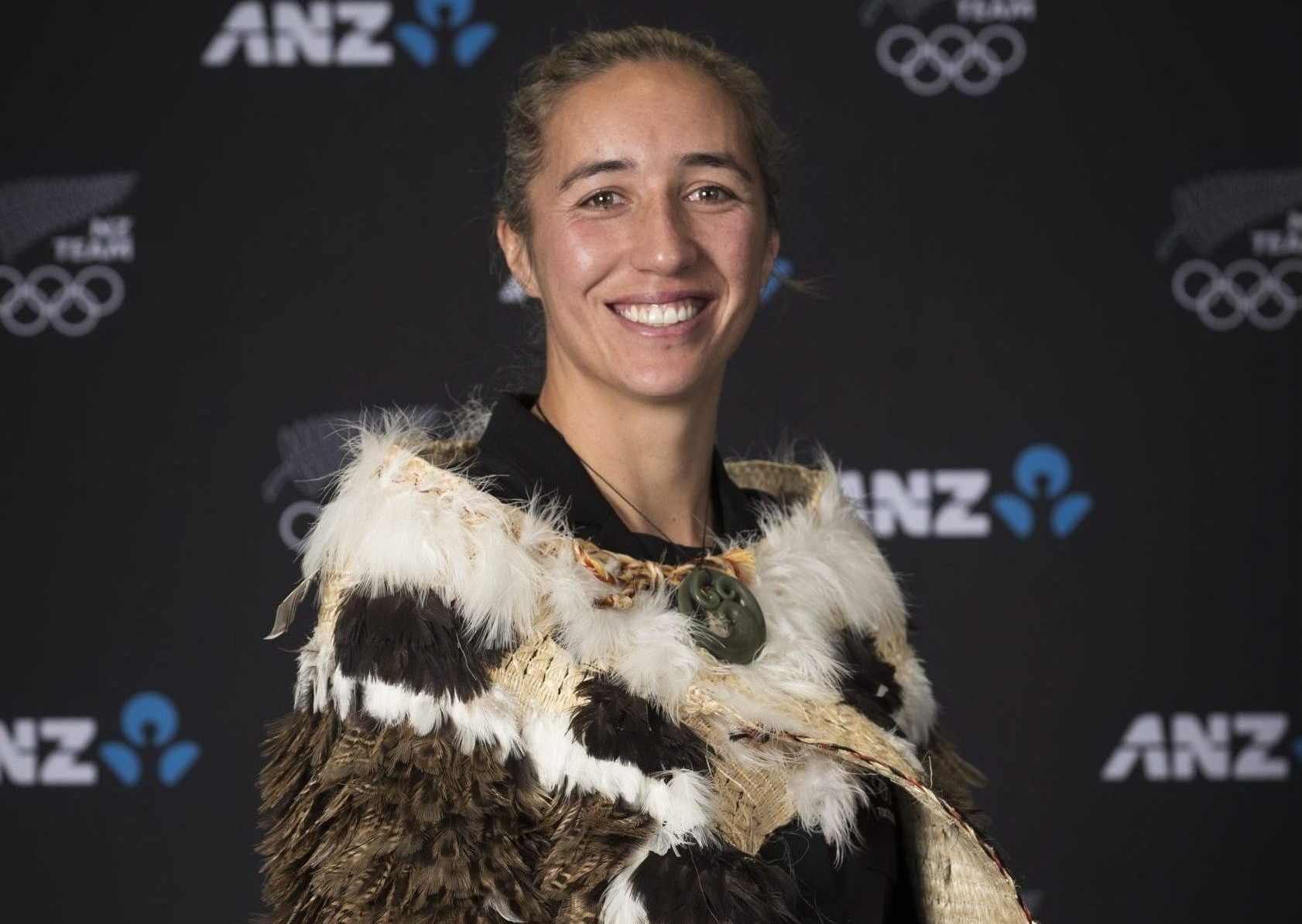 Sarah Hirini, captain of the Black Ferns, at the presentation of Te Pou Hapai Wahine, in Tauranga, June 2021. (Photo by Greg Bowker/Getty Images for the NZOC)

This weekend, Black Ferns Sevens captain Sarah Hirini (who’s Ngāti Kahungunu) and her teammates are back to work. This time it’s in France, in Toulouse, where they’re rejoining the international series which they used to win almost routinely — seven times in eight years, in fact, until Covid messed up things over the last couple of years.

Even before that, the Sevens world was changing, with Australia becoming annoyingly competitive (like beating us in the final at the Rio Olympics in 2016), and other international teams (France and Fiji in particular, and even the USA) making it tough for us, too.

But, through it all, there’s been a wealth of Māori and Pasifika talent on display with Sarah leading the team to a gold at the Tokyo Olympics in 2020, as well as being Aotearoa’s flagbearer there.

The achievements and awards don’t stop there. She’s gathered up a degree from Massey University and a pilot’s licence. And she’s been chosen, ahead of all our male and female players, as the New Zealand rugby player of the year.

And here she is now in southern France, along with superstar mates such as Portia Woodman, Michaela Blyde, and Niall Williams (Sonny Bill’s sister), itching for another notch in her belt with yet another win.

Before she set off on that project, though, she paused for this chat with Dale.

Tēnā koe, Sarah. Thanks for being a guest on E-Tangata. I know you’re busy now that you’re back on the international Sevens circuit, so there’s heaps of training, travelling and competing these days. But let’s start with some family background.

Sarah Goss was my name before I got married. I’m from Palmerston North and I grew up in the Manawatū, but I whakapapa back to Wairoa. And now I live in Mt Maunganui with my husband, Conor.

What about your whānau connections to rugby? Did you grow up in a rugby family?

We were a very sports-loving household, supporting the All Blacks, Silver Ferns, or whatever New Zealand team was playing. I started playing rugby because I was at boarding school (at Feilding High School) and my mates were playing — and I wanted to hang out with them.

You’ve got a family connection to the shearing industry, I believe.

Yeah. My dad, Alan, won shearing titles at the Golden Shears, and my mum, Ronnie, won a couple of Golden Shears titles in wool handling. Me and my brother Simon competed, too. So, we grew up around the woolsheds. And now Simon’s gone back to shearing full-time.

You’re pretty handy at shearing, yourself?

I don’t know about now. I wasn’t too bad back in the day, but these days I try to avoid the woolshed.

When you were growing up, who were your sporting heroes?

Sarah Ulmer and the Evers-Swindell twins. I watched them compete and was inspired by what they could do on the world stage. That was a big motivator for why I wanted to represent New Zealand at the Olympics. Being female and seeing them dominate was a huge inspiration for me.

On the rugby side, it was probably Farah Palmer, not just because of her leadership role on the field, but also the things she was doing off the field, making a real impact in people’s lives. And being a professor at Massey University as well as the first female on the board of the New Zealand rugby union.

You’re following in her footsteps. Have you finished your studies at Massey? I’m wondering how you juggled footy and study.

This is one of the first years I haven’t studied since leaving high school. I went full time at Massey University, doing a Bachelor of Arts in Māori and sports science. Then, after I got picked for the national Sevens team, I studied part-time for eight years.

Then I got my pilot’s licence, which took me the last three years. I’ve loved being able to do something outside of rugby and take my mind off it. But, to be honest, I’m enjoying not studying this year.

You must enjoy seeing our land from above and flying yourself around, Sarah.

Yeah. I’m grateful that I got to do my licence here in Mt Maunganui. Every day it was a scenic flight, flying around the Mount, shark-spotting — not that people like to hear about the sharks. But it’s a beautiful place to fly around.

We’re always looking to advance our people’s issues and kaupapa. What’s your thinking on how important sport is in the framework of Māori development?

I think sport is so important. I’ve learned so many things by being in a team — creating relationships with all sorts of people, and learning how to communicate in honest ways. So much of what I’ve learned in sport is relevant to other environments, like business.

You’ve made our hearts swell with pride doing a mihi in an interview as a skipper. What prompted that?

I’m pretty whakamā when it comes to speaking Māori out loud. I know that sounds bad, but I’m not an out-there person. I like to stick to things that I know, and I don’t speak te reo fluently. But seeing others speak our reo on TV, and other captains speak their languages, such as Pasifika players — that made me feel really good.

I know that if I want to continue to lead our people, then I have to have the courage to be able to speak te reo on TV and in other forums.

You’ve been all around the world in the Sevens tournaments which I assume will have helped you grow as person and given you much more confidence.

Yes, I think I’ve grown a lot in the 10 years that I’ve been part of this programme. We’re competing against each other every day, and that does come with challenges. But I’ve learned how to respect people for who they are. And I’m really grateful for the experience I’ve had.

What’s been your proudest moment in a black jersey?

It’s hard to go past your debut — that’s a special moment. But I think it was probably the time that my mum, my sister and my niece surprised me by turning up when I played my 200th game in the south of France.

The whole team had set it up. My coach asked me down, and I’m like: “What is going on?” And there were my mum, sister and niece sitting in the foyer. Playing in front of them was pretty special.

Sports is about winning, and you’ve done plenty of that, but you’ve also had to cop a loss every now and then. Are you a good loser?

I definitely respect my opponents, but I don’t think I’m a good loser. I love winning too much to enjoy a loss, although I know that our losses have made us a better team.

You’ve won Commonwealth and Olympic golds. And you were the flag bearer for the New Zealand team in Tokyo. When you were walking into that stadium, what went through your mind?

That was very, very special. Even thinking about that now, I get quite emotional. I was representing so many people: my whānau — my mum, who unfortunately is not here with us anymore — my teammates, the whole New Zealand team, the people who have carried the flag before me.

So, I’m really proud of that. Then, to think that I was the first Māori female to carry our flag at the opening ceremony. I’m even getting goosebumps just talking about that.

You’ve had other accolades, too. New Zealand Order of Merit, being named 2021 New Zealand Rugby Player of the Year. These are wonderful honours. But there’ve been challenges as well, especially with the loss of your mum last year.

It was extremely tough. I had the absolute lowest of lows as well as some pretty massive highs, but I’m very lucky with my support network — my husband, my whānau, and some pretty good mates who were there the whole time. They would come around to my house, get me out of bed, make sure I did training.

And I had a very supportive team who allowed me to take time when I needed it. Sometimes I’d train one day, and not come back the next. And they never questioned why.

Aroha ki a koe. We’re doing our best to try and draw women into sport beyond high school, because so many participate there, and then drop out. What can we be doing better to keep our wāhine involved in sport for the good it does for them within their whānau?

I think just keeping it fun is important. And not necessarily making it about what happens on the field, the pitches, or the courts in whatever sport they’re playing. Even the stuff around the warm-ups. So that the girls enjoy hanging out with their teammates.

Where is life heading for you now, Sarah?

You mentioned flying. Anything else that you do to keep yourself fresh and loving life outside of footy?

I live for walks to the beach, so I’m at the beach every morning with my dog. I love hanging out with my family. I’ve got a niece and nephew who I try and spoil as much as I can. Those are the things that are keeping me happy and busy outside of rugby.

(This interview has been edited for length and clarity. 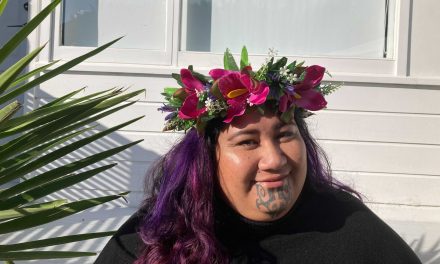