What’s in a Māori name? 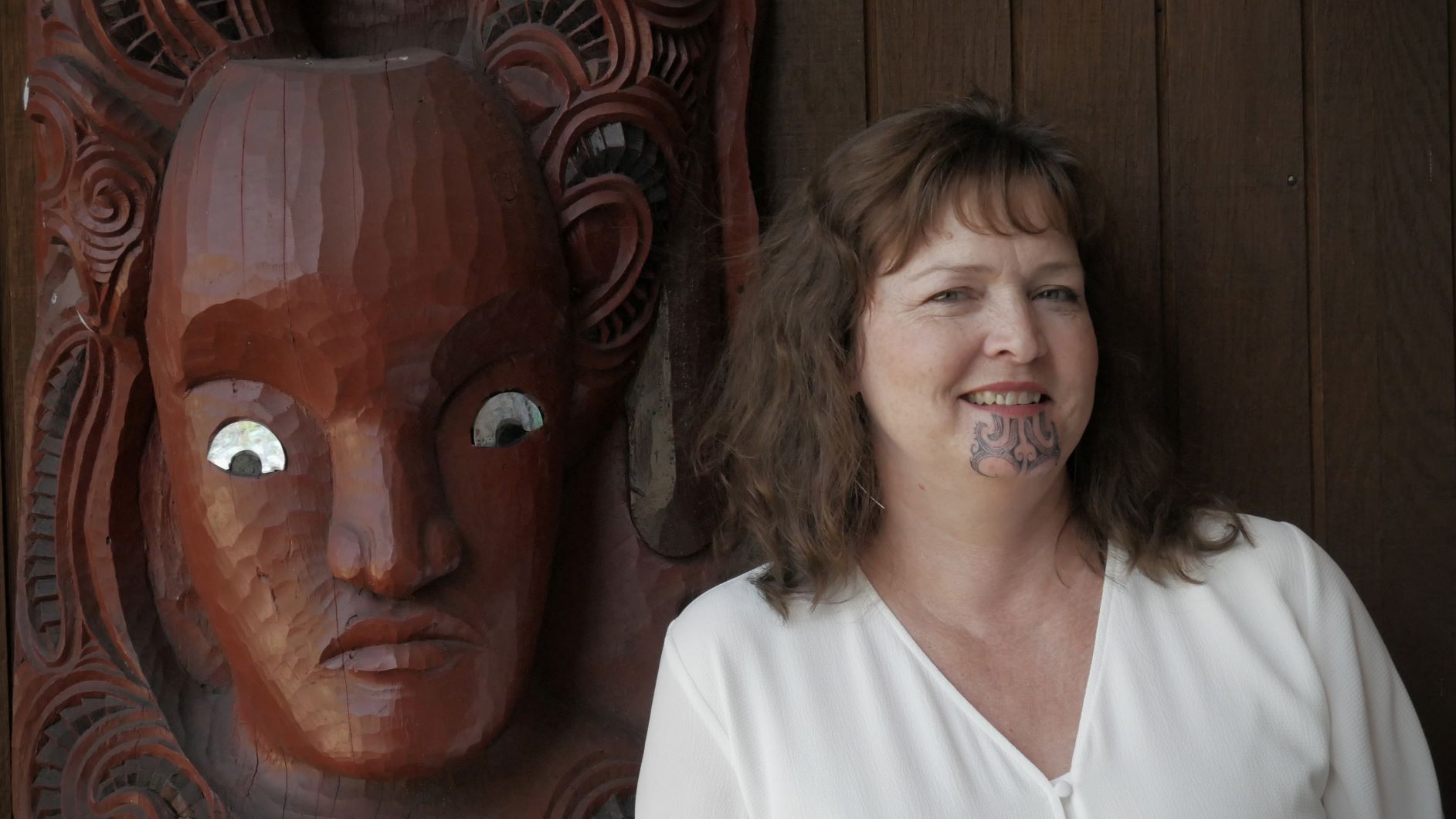 What’s in a Māori name? Often, a great deal. In the past, tūpuna had a single name, but they often took new names to mark changes in circumstances over the course of their lives. In an oral culture, name changes were a way to help maintain collective memory.

Colonisation brought the convention of surnames. Religion, iwitanga, whānau tradition and war all played a part in changing naming practices too. Tunis, Alamein, Medenine, Faenza and Cassino, which are all significant World War II battle sites, have been given as names to Māori babies to remember where the best of a generation were lost.

Now, increasing numbers of people who weren’t given ingoa Māori as babies are assuming them in adulthood. Or, if they were given English first names and Māori middle names, are starting to switch them around.

Here’s Atakohu Middleton with the story of her name, given to her five years ago.

Way back in 1969, the first name on my birth certificate was Julie. It was simply a name my parents liked. Dad, the parent with whakapapa Māori, had been raised in the Pākehā world and had resolutely stayed there. Māori names for me and my younger brothers didn’t enter the equation.

As I grew up, I was never particularly keen on Julie, but that was just the way it was. Then, when I was 47, something really cool happened.

I started learning te reo in earnest in my 30s and spent a lot of the period between 2014 and 2020 at kura reo doing five-day immersion courses that provided a reo-only haven. On a chilly Sunday afternoon in April 2017, I was in Tokoroa at Te Papa o Te Aroha marae for the annual Raukawa kura reo, which started with a pōwhiri.

Formalities nearly at an end, I was inching down the hongi line when someone I regard as a language mentor, kura reo teacher Ngaringi Katipa, saw me coming down the line towards her.

She called out, from a distance: “Pīrongia!” At the time that was her nickname for me (it’s my ancestral mountain). Another reo inspiration, Pānia Papa, was standing next to Ngaringi and wondered, quietly, if mountains should become nicknames.

She asked Ngaringi if I had an ingoa Māori. Ngaringi guessed, correctly, that the answer was “kāore”. Between them, an idea was planted.

What neither Pānia nor Ngaringi knew was that I’d been keen on a Māori name for some time as a reclamation of that which had been lost to our whānau: our reo, our iwitanga, our tuakiri Māori. But I hadn’t said anything to anyone, not even my tāne, as I felt that ingoa should find you, rather than the other way around.

In my mind, it was up to the wāhi ngaro. If it happened, it happened. But it wasn’t up to me to push it.

A couple of days later, I found myself in an 8.30am close reading class that Ngaringi runs. It started with a round-the-room whakawhanaunga to ensure everyone knew everyone else. When she got to me, Ngaringi said that she had pondered over a name for me and “Atakohu” had come to her wairua.

I remember that time seemed to grind to a stop then and there. As her words hung between us, I’m told I assumed a sort of slack-jawed, surprised expression. I do remember wondering, briefly, if I’d misheard something.

Then I felt a mixture of shock and delight at how things had come together. While I sat there taking it all in, a couple of classmates said something along these lines: “Koia! That’s it then.” And they started using Atakohu straight away. It sounded so right. To them and to me.

Ata means morning and kohu means mist, and the whakapapa of the name rests in our creation story. The many sons of sky father Ranginui and earth mother Papatūānuku were squashed unhappily in the dark between them. The sons embarked on fractious wānanga about how to free themselves from the suffocating environment between their parents and gain te ao mārama, the world of light.

After much talk and various brothers making unsuccessful attempts to push Rangi and Papa apart, Tāne lay on his back, on his mother, and used his legs to push his father away. The separation caused a violent ripping of the melded flesh holding Rangi and Papa close, and they were highly distressed at being forced apart.

To this day, Ranginui’s unending aroha for Papa falls on her as rain, and Papa’s distress rises to him as mist. The name Atakohu is fitting for a morning person like me. My senses are most acute at dawn and I love being up, alone and outside, as the day awakes.

You could also say that Atakohu reflects that I am kiritea, or fair-skinned, thanks to mum’s Australian Irish genes stomping mightily all over dad’s Māori ones.

That night, I rang my husband, Andrew, who was up at our Kaipara property, where he spends a lot of time planting native trees and waging war on pest animals.

He reported that around the very time Ngaringi was talking to me that morning, he’d been standing on the edge of the deck having a mimi into the grass, watching the morning mist swirl around the valley below, thinking it was beautiful and, he claims, also thinking sooky thoughts about his wife.

Andrew was right behind me changing my name, and so were the next most important people in my life, my two younger brothers. (Our parents have both been gone for more than 20 years.) Atakohu became my legal name and Julie a second middle name.

To make it legal, all I had to do was apply for a new birth certificate for $170 and I had it within a few weeks. He mahi kai parāoa noa iho — easy as. It took a little longer getting documents and accounts transferred into my new name, but this was a bit of life admin I didn’t mind. I got a kick out of seeing each amended document arrive: passport, driver licence, bank cards, even the utilities bills.

Now I bear handles that reflect my whakapapa and my settler heritage, rather than just the latter. I carry my name with pride. It’s a very public signifier of the reclamation of my whakapapa, and mine is the first Māori name in our direct line in 186 years.

The last was my tupuna Pourewa. When she was married to a British settler in 1836 at the Waimate North Mission Station, she was given the name Margaret, no doubt by the missionaries. And after that, the names were all of a kind: Joseph, Charlie, Annie, Margaret — right through to Julie.

I haven’t had any negative reactions from those I interact with frequently. Thankfully, the circles I move in rarely involve dinosaurs. There were a few good questions from cousins.

One asked why I didn’t take an ancestral name and I had to answer him, truthfully, by saying that, as I wasn’t raised in te ao Māori, an ancestral name didn’t seem quite right. Although some of my kaumātua used to address me as Tūria or Hūria, the Māori versions of Julie, they hadn’t raised a Māori name for me and I wasn’t about to ask.

Most of my Māori-speaking mates made the mental switch to Atakohu immediately — for many of them, name changes aren’t unusual. But some had stubborn brains that were slow to shake my old name, and for months Julie fell out of their mouths.

I’d simply correct them without making a fuss, as they were usually kicking themselves already. I remember that I’d had the same problem myself about a decade before when both a close workmate and a cousin took faith-based names.

Helping those without te reo to get their heads and tongues around the new moniker required creative thinking.

I’ve been upfront about how my name is pronounced for non-Māori mates. I’ve said it’s essentially Arta, with the “t” sound made by putting the tongue on the roof of the mouth behind the teeth, followed by caw-who.

Although I prefer people use my whole name, if someone looks stricken at having to deal with four syllables, I lighten the load by suggesting they use Ata only and give them the silly mnemonic “Ata is utterly wonderful” to help them remember it.

Such outrageous immodesty usually raises a laugh, and koinā, they remember. Of course, this prompt means that they are saying the name with a sibilant English T rather than a Māori one, but it’ll do to get them started.

My husband also felt he needed to come up with mnemonic to help his non-Māori mates get the “kohu” right. He came up with “Richie McCaw. Who?” They’re all rugby nutters and that prompt works for them.

I may roll my eyes at my husband’s ability to make everything in this life about the All Blacks, but I’ll run with whatever works to help people say what’s in a (Māori) name.

Long-time journalist Atakohu Middleton is this year on leave from her role as a senior lecturer in the School of Communication Studies, Auckland University of Technology. She is working in Māori-language news for Radio Waatea.