My DNA results are in. I’m whiter than the milkman. 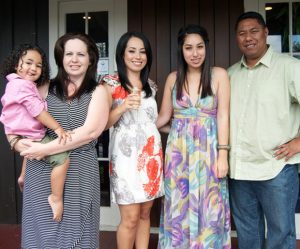 As some of you will know, I recently had my DNA tested.

Well, I got my results back, and I had a Jessica Alba moment. I’m officially whiter than Larry David.

I am laughing all the way back to northern and southern Europe. My DNA tested French, Italian, Serbian, English and Portuguese. No traces of Oceania at all! My ancestral homeland: Europe.

I’m whiter than the milkman.

All jokes aside, the results are absurd. There was no trace at all of my Samoan father’s bloodline.

And in case you’re wondering. Yes, my dad’s really my dad. I know because I have his not-so-straight teeth, as my mum assured me when I asked her what of Dad I’d inherited, if not his ancestral homeland.

She was the first person I told my results to. Her eyes bulged, and then she roared with laughter. Her first words were: “Your dad is definitely your dad.” And then she continued laughing.

Dad was the most confused of all. He was hoping my test was going to give him his DNA Detectives moment, like David Fane, the Samoan actor. Instead, he just asked: “How?” All this giving him more fuel to convince Mum he needs his own DNA test.

I can’t help but feel ripped off. The results seem to confirm what we know of my mother’s bloodline, but how is it possible to not find a single trace of my father’s ancestry?

According to the information I got with my test, “individuals that are known or suspected to be multiracial may show a stronger linkage to a particular Regional Affiliation due to the statistical odds of genetic inheritance.”

So, if an entire strain of my ancestors can’t be read by a $500 DNA test, then what actually is DNA?

There are many companies like Easy DNA (the one I used), which claim that, for a few hundred dollars and a swab of your inner cheek, they can reveal your family tree and ancestral homeland. According to one study, more than 46,000 tests have been purchased in America alone over the past six years.

But scientists say that “recreational genetics”, as they call it, has significant scientific limitations and rely on our own misconceptions about race and genetics.

In other words, it’s mostly hype.

The biggest misconception is that DNA testing can reveal information about an individual’s ancestry. Apparently not. These types of tests analyse only about one percent of a person’s genome. This means that only snippets of DNA that are passed down only through the mother, or only through the father, are analysed.

Using DNA and blood quantum to define who we are has a dubious history. The Nuremberg Laws of 1935 under the Nazi administration legally classified a Jewish person, not by religious affiliation or self-identification, but as someone with at least three Jewish grandparents. A person with two Jewish grandparents was also legally considered to be Jewish, but a number of other criteria were applied to decide the degree of “Jewishness”.

Blood quantum laws are still in place in the US to define membership of Native American nations. Some tribal nations forgo blood quantum altogether, requiring only that members be able to document descent from a recognised ancestor. But most tribes have a minimum level of blood quantum, ranging from five-eighths (the highest) to one-sixteenth (one great-great-grandparent).

An artist friend pointed me in the direction of a branch of biology called Epigenetics. Turns out that when the human genome was sequenced in 2003, scientists thought they could prove that inherited DNA was the primary architect of living systems. They were surprised to find that only around one-third of genetic material was inherited. The other two-thirds was “uncoded” — malleable genetic material that needed environmental information before they could take form.

A lot of science babble, I know. But the upshot is that human beings are changeable and not fixed by inherited DNA. Even more interesting is that the genetics that we code ourselves — through our own lived experiences — then become a part of the genetics we pass on through reproduction.

So we’re the products of our genes, environment and experiences — nature and nurture.

I am a granddaughter of migrants and labourers. My grandparents, Joe and Sala, pregnant and newly married, migrated from Samoa to New Zealand in 1970 to find the land of milk and honey. Joe’s father migrated from Niue to Samoa to work on the roads, hence my Niuean last name. Sala’s great-grandfather was a coolie who sailed down from southern China to work in Samoa under the German administration. And, ultimately, my Samoan ancestry, like those of other Pacific people, including Māori, stems from the Austronesian peoples now associated with indigenous Taiwanese.

My DNA test told me none of that. I learned it through the Samoan tradition of oratory. The idea that I could have learned who I really am through DNA testing was nonsense.

The greatest cultural learning — the basis of identity and belonging — comes from those who are around you. The grandmother who does your fōfō (massage) and the cousin who has better fa’a-Samoa.

I took the test for a bit of fun, and I have no regrets. But my advice? Don’t waste your money.