I’m the unrealised vision of my dad’s migrant dream 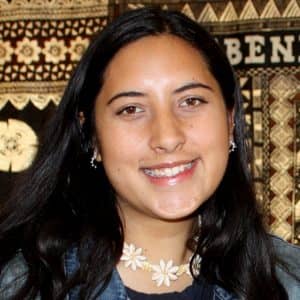 I sat on the freshly concreted wall to my father’s grave, with tears steaming off my face. It was a hot day. The hottest day since we had arrived in Tonga. The mats had been lifted, the ngatu folded away. I placed my head behind the decorative fabrics that had been strewn across the roof of the burial site, trying to protect myself from the midday sun and hide my tears from my cousin’s phone as she live-streamed my father’s unveiling on Facebook.

I was eight when my dad died. It was October 1999, and I was at school. It was during quiet writing time when the school office lady came to our classroom. We always knew something serious had happened when we saw her head pop over the glass window of our door.

My teacher went out to talk to her, and when he came back, he sat me on his lap and told me that my father had passed away. I didn’t say anything. I went back to my desk and continued to write. My friend asked what our teacher wanted and I wrote her a note: “My dad passed.” I still have the book with my messy note scrawled next to drawings of cats and the secret language I used to write the names of our crushes.

Even now when someone talks about the time our dad passed away it’s like I was never there. Everyone’s experiences of that time were so different, each of us going through our own unfolding story in the way those kids’ “choose your own adventure” books used to let you pick the narrative and jump from page to page skipping entire stories in between.

My siblings, all six of us, have different stories to tell. Sometimes we don’t even feature in each other’s book.

My story of that time is intertwined with the revelation of a cultural identity — and questions that could no longer be answered by the person I most wanted to ask: my dad.

My dad was Visesio Felise Tupou — or Vincent as I was more accustomed to hearing as a kid. He was the first from his family to move to New Zealand.

On the flight home after my first trip to Tonga, I tried to imagine what it must have felt like to make this journey as my father had done 30 years before: the neatly squared-off pieces of farmland, the roundabouts, the fences between residential houses. It was easy to see the stark contrast between here and Tonga.

Dad had been living at the Catholic seminary in Sydney when he met my Pālangi mother, Maria, at a Catholic summer school programme. He later followed her to Auckland and, after Mum finished her studies, they settled in Hamilton and had six children. I’m the youngest. Over the years, Dad was a musician, guidance counsellor and picture framer.

It wasn’t until he passed away that I realised I was Tongan. Up until then I thought I was Māori.

There’s a photograph of me as a five-year-old standing under a small cardboard marae that our teacher had made. The photo is taken at a low angle, but you can see that I’m holding my chin up high. I look proud. And I was proud.

I remember singing Tūtira mai ngā iwi/tātou tātou e, and listening to the story of Maui and the Sun imagining Maui was my own fie poto brother always getting up to no good. I remember thinking that I was learning about my people and that the other kids in the class were getting a momentary peek into my culture.

Of course, there had been trips to Auckland to visit the rellies with Dad, where I’d sit shyly in the back of his stationwagon watching my cousins play on the driveway of my aunty’s Mt Roskill home — eventually moving to sit on the backdoor steps of the house and looking at the freshly killed pig waiting to be prepped for dinner. I remember a lot of laughter: loud, cackling, back-breaking, tear-filled laughter.

I remember my grandma ‘Oto, who couldn’t speak any English, lovingly stroking my hair. Her breath always slow and clouded and interspersed with the word talavou — pretty — repeated over and over.

I remember the stringiness of manioke, and stained tongues from guzzling down the brightly coloured fizzy drinks bought in bulk from Pak’nSave. I remember the blankets our aunty made us, and the money she would push into the palm of my hands as we said our goodbyes.

But living in Hamilton with no Tongans around us, it often felt as though that part of my heritage was invisible. When our Tongan family came to Hamilton after dad’s passing it was like they brought a new world with them. The cultural protocols and grieving process would be my entry point into Tonga. A bittersweet moment of immense discovery and immense loss.

I remember the cars that blocked the driveway, the tents pitched in the yard, and top and tails in almost every bed — with at least two sets of cousins. My aunties all sat in a row, lining the walls of our lounge. Their hair dishevelled and oiled, not like the usual slicked-back bun. Their wailing filled the room with his ghost, and the fala that covered the windows trapped him in there for what felt like forever.

I remember it as a hot summer’s day, but maybe it was just the heat of our emotional bodies all occupying the same space that created the humid weight in the air. My uncles with their ta’ovala wrapped around their waists and above their heads, moved quietly and kept the order.

We moved around, wriggling like the children we were, not making eye contact — unsure if it was the right thing to do. At the end of the lounge sat Grandma ‘Oto with a bottle of what looked like perfume in her hand. She sprayed it obsessively as if the Holy Ghost himself could be summoned through the haze of vanilla musk.

And I can remember locking my eyes on the then unfamiliar word: TONGA. In my memory it feels like it was floating along the walls of the lounge, but it was probably stained onto the ngatu — the tapa cloth — that draped over the mantel.

In that moment I realised that my skin carried more to it than I knew. My brownness made up from a different kete of knowledge, spanning across an ocean that was yet to exist in my world.

After Dad passed, our relationship with the Tongan rellies had felt a little broken. Sometimes it can feel like we’re only tethered through Facebook updates, weddings and funerals. But whenever my aunties, uncles and cousins look at me and say: “You have the same face as your father,” I realise that these are the strongest relationships in my life. We are bonded by blood and ancestry — and that helps us push through any lost time.

Dad wanted to be buried with his father in Nuku’alofa, so that’s where he is. At the end of last year, when we unveiled his headstone, it seemed that I too had been cemented to a place. Sitting under the shelter of my father and grandfather’s new burial site I felt a stillness that signalled to me that this was my shelter too. I had learned a new phrase on that trip: foki ki’api — to return home.

It’s easy to say that I am the child of a migrant who tried his hardest to shed the Tonganness of his skin and tongue. That, as a product of this thinking, I am “better off” for never speaking broken English, for never feeling torn between family duties and education, for never feeling like anything and everything was not possible in life.

But I like to think that I’m the unrealised vision of that migrant dream. I am an image of a hafekasi, mistaken for Māori, Indian, Arabic or other ethnicity on any given day, never seen as Tongan by other Tongans — a mixed-race warrior who fights internally and externally almost daily for just a second of cultural equilibrium.

I’m a vision who’s been pushed to discover all that I am, and all that I’ve come from, to validate the Tongan upbringing that I never had — yet with the gall to still lay claim to my own Tonganness.

I am the unrealised vision that two cultures can merge without having to leave one behind.

There’s a famous Anaïs Nin quote that goes: “We don’t see things as they are, but rather as we are”. It reminds me that life is not experienced through the name or identity that people give us — it’s experienced through who we are, even if we don’t always know who that is.