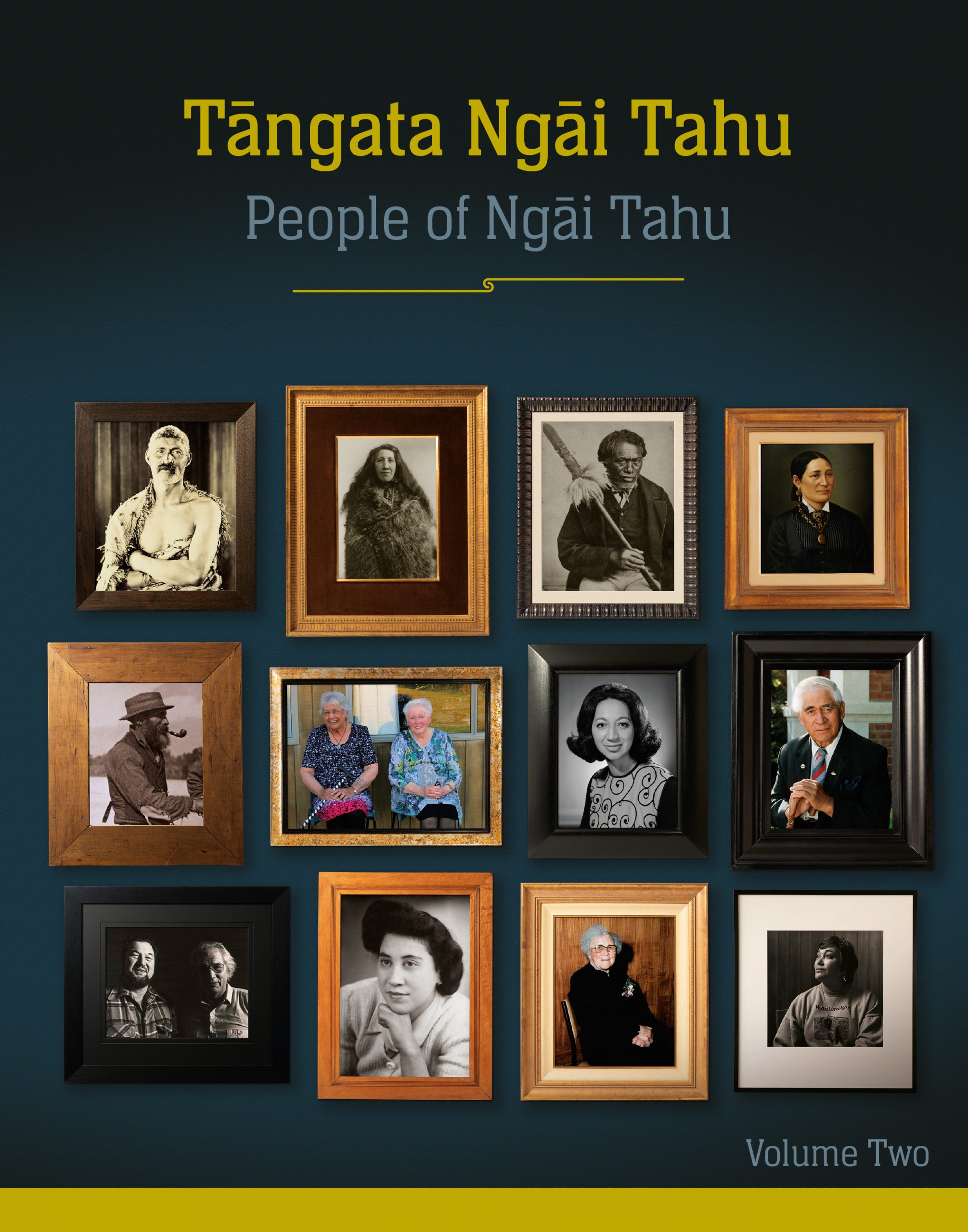 It is the nature of a book like this that, on the initial flick through, you wonder who you might know. I stopped at a photograph of a man building a mōkihi, the traditional raupō raft used on lakes and rivers.

I had met this man, Timothy Birmingham Te Maihāroa, during the lead-up to the 1990 sesquicentennial Treaty celebrations, when waka of all types were being built to take part in a mass flotilla at Waitangi.

He was supervising a group in Napier who were building a craft related to mōkihi, a waka pahī, an oceangoing vessel used for crossing between the islands of Rēkohu. This vessel, Te Rangimata, would represent Moriori at the sesquicentenary.

My contact with him was fleeting, but here in the lavishly illustrated and beautifully presented 400-plus pages of Tāngata Ngāi Tahu, I meet him again. (He passed away six years after the sesquicentennial.) I learn that he came from a family of 14 children, growing up on the northern banks of the Waitaki River, that he and his siblings used to be taken out of school for three months of the year to go potato picking around the district, and that his brothers were part of a tug-o-war team which won national competitions.

But it is for his knowledge of mōkihi that he is most remembered. He revived the craft of building these vessels and ensured that the mātauranga would be passed on to future generations. 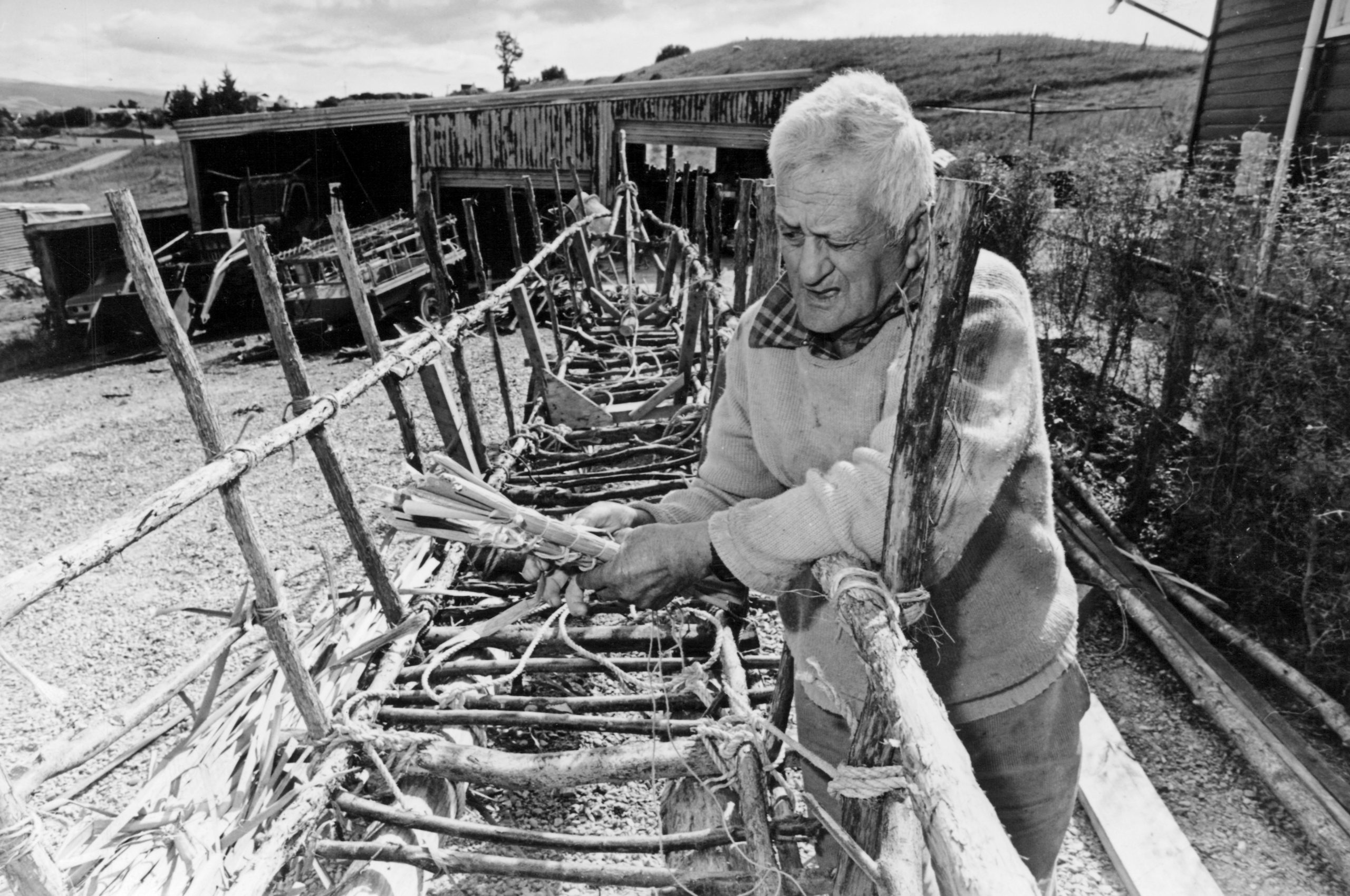 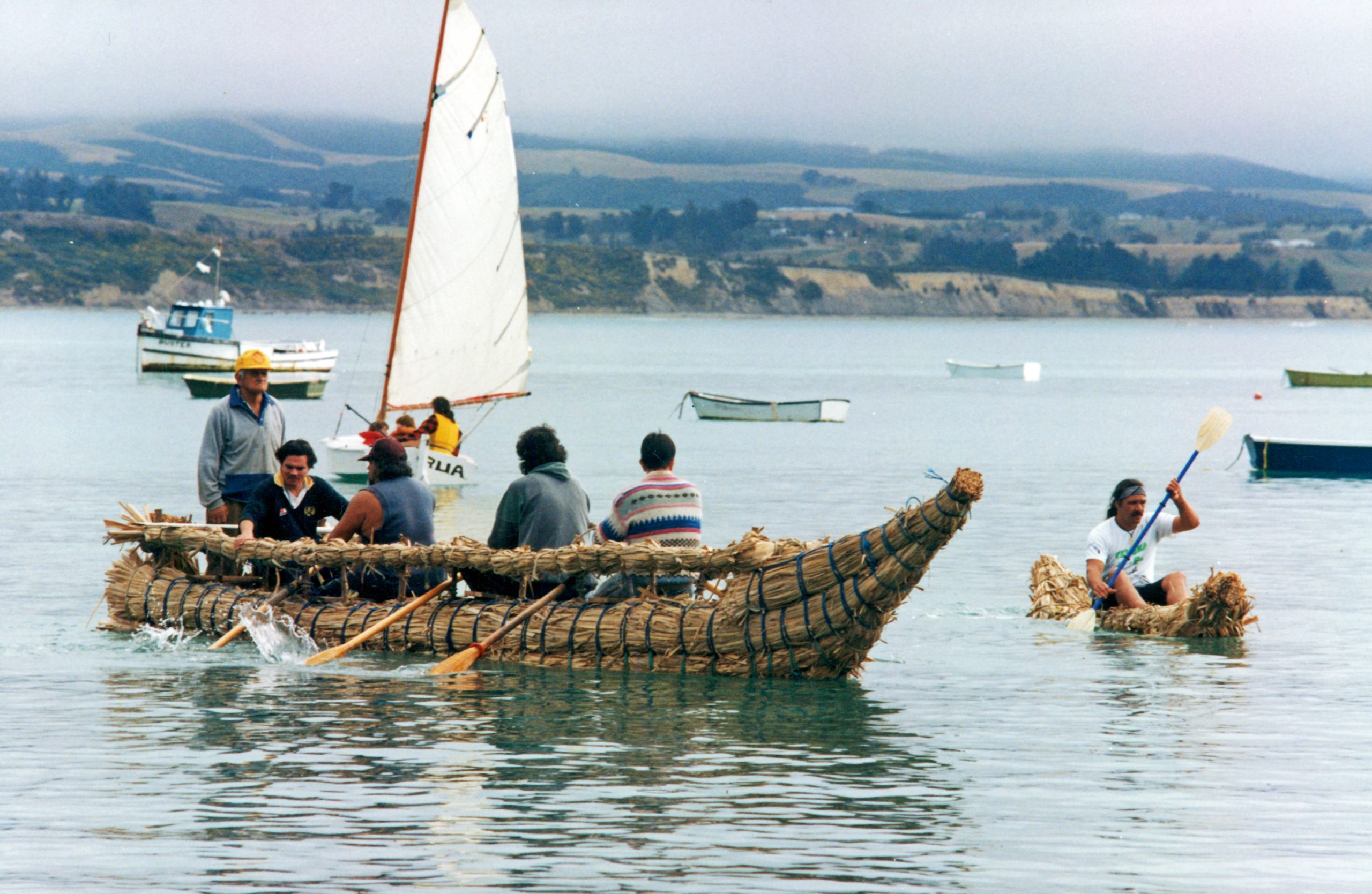 The year after I watched him lash raupō for the 15-metre waka pahī, he took part in a sesquicentenary event with Thor Heyerdahl, of Kon-Tiki fame, and gave the Norwegian anthropologist a model mōkihi as a souvenir. He wove connections even as he wove rush and flax. And through reading the biography of this coal miner, shearer, cook, wharfie, fisherman, freezing worker and knowledge keeper, I feel a new breath of connection and admiration.

Stirring that breath is clearly the intention of Ngāi Tahu’s biography project, out of which this book and its predecessor spring. The first volume — the first fruits of the iwi’s effort to gather and present the stories of its people — was published in 2017.

Both books aim to whakamanahia — that lovely word that means “to give prestige to”. While prestige in the first volume was directed to a “majority-male cast,” note the two co-editors, Helen Brown and Michael Stevens, here just over half the biographies are of women. Most are written by descendants — an impressive publishing achievement, and consistent with the Ngāi Tahu dictum: Mō tātou, ā, mō kā uri ā muri ake nei — for us and our children after us.

In the foreword, Tipene O’Regan makes mention of the increasing number of women in leadership and governance positions in Ngāi Tahu. He says these statistics speak to the “central importance of wāhine within Ngāi Tahu culture”.

But while the mana of women may always have been important, “the dual impacts of colonisation and patriarchy have frequently led to our women’s contributions and accomplishments being omitted or overlooked,” write the editors in their introduction.

But here they are — and what women they are! 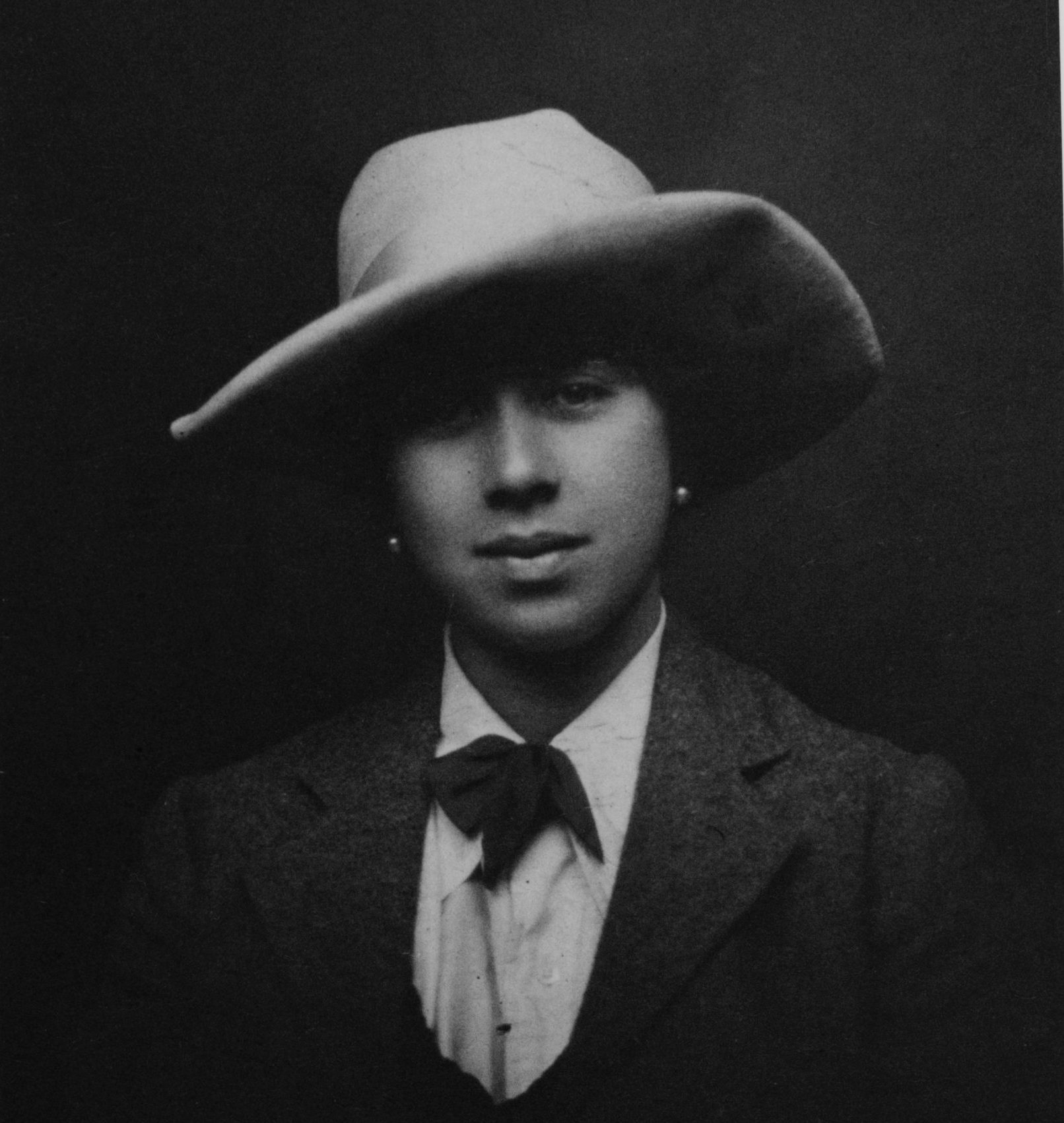 Even in her 70s, living in Masterton, she was supervising girls doing community service for minor offences, again teaching them practical skills. “Her success with the young,” we are told, “derived from her sense of fun and good humour. She did not patronise those in trouble but motivated them towards positive self-help.”

In her 80s, she was still living a life of service, delivering Meals on Wheels, often to people younger than herself. “Outliving her descendants,” the authors write, “Kuini planted a new rose bush for every one of them when they died, until her lawn was encircled with roses.”

Her entry, like most, is enriched with photographs, from a portrait taken in her 20s — a demure young woman wearing pearl earrings and a stylish hat — to a snapshot in her 90s, with a twinkle in her eye, seemingly about to make some quip. Late in life, we are told, she was often bemused at her hereditary rank and position as a person of importance in the iwi. 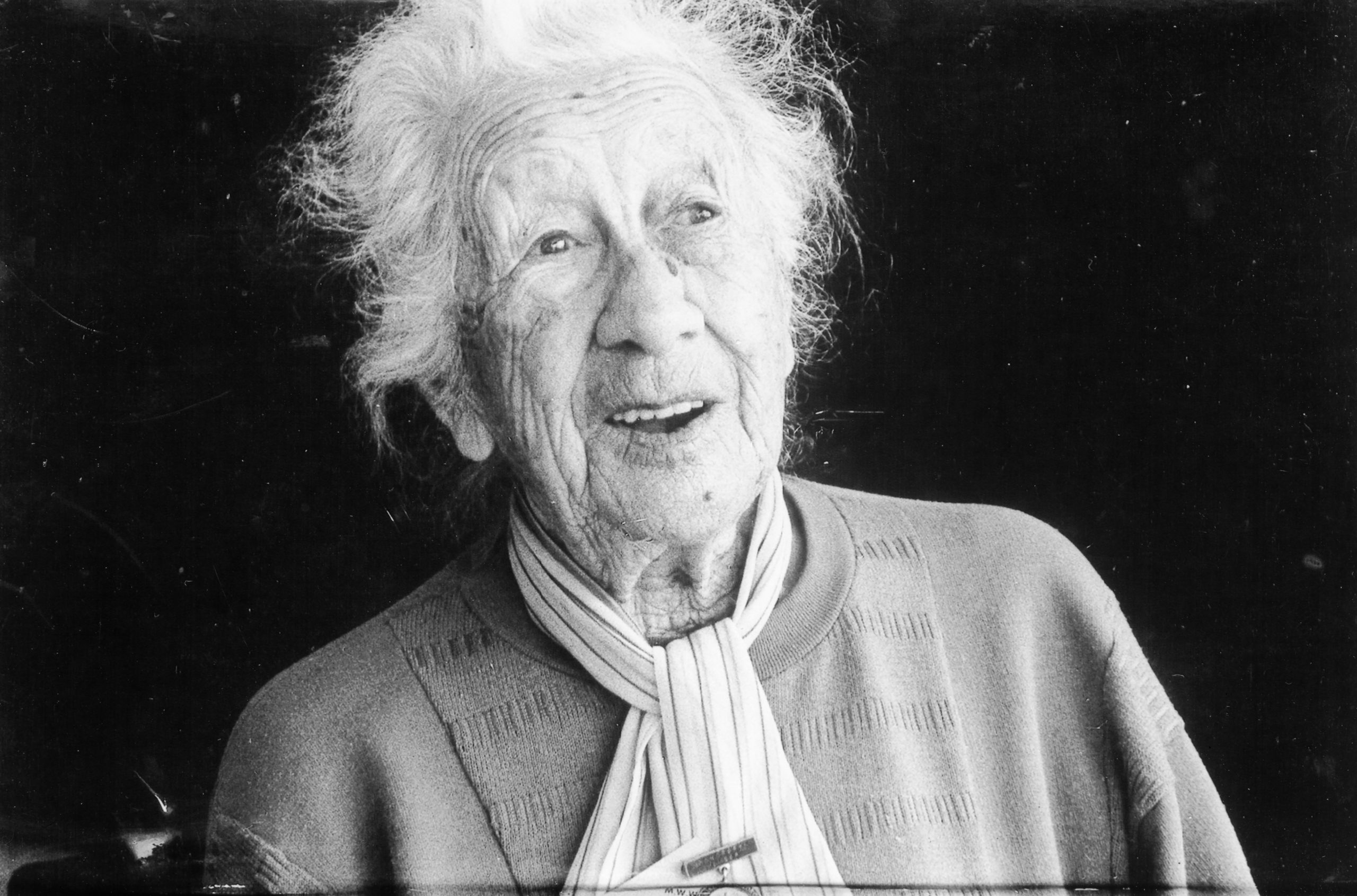 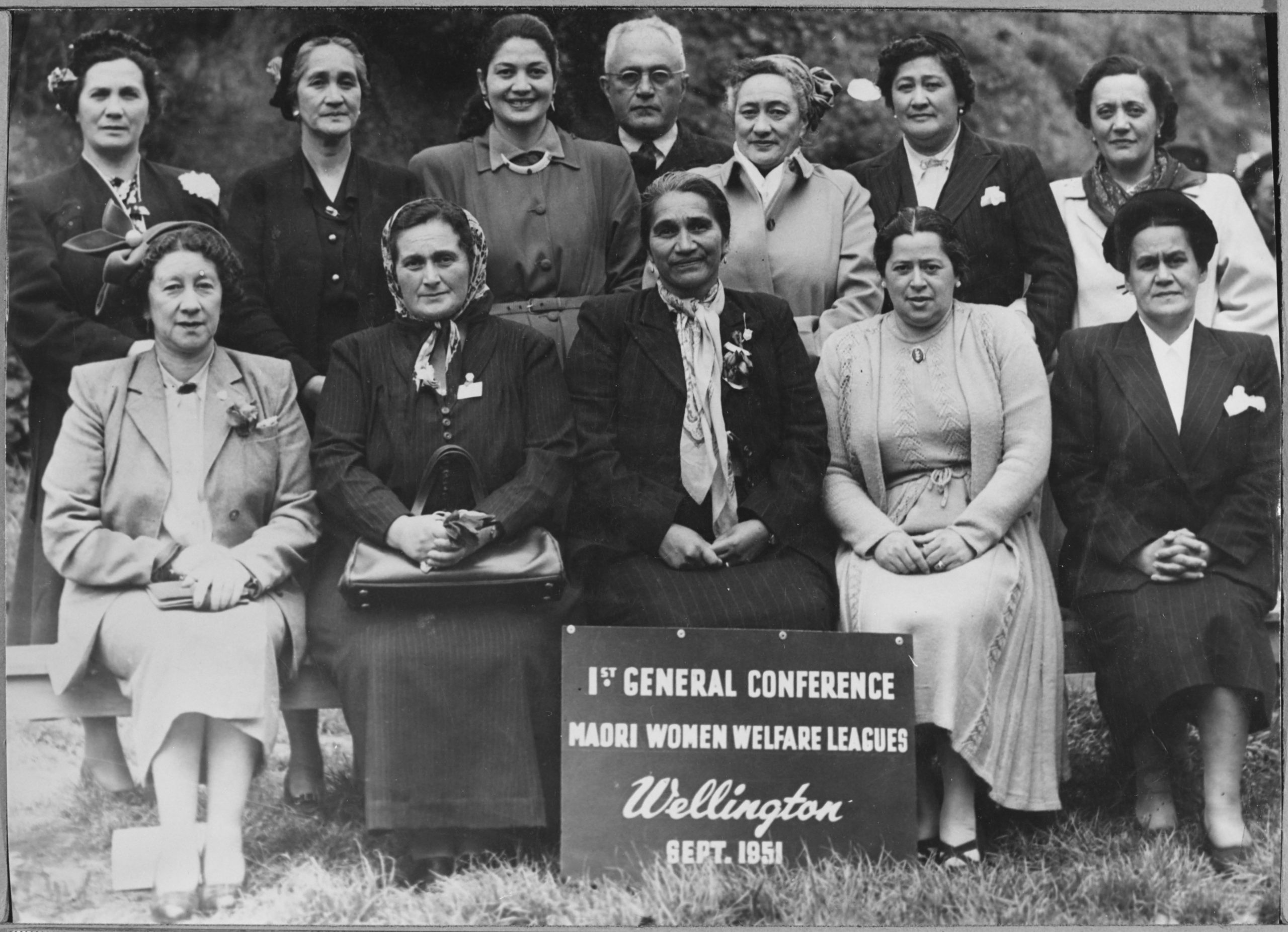 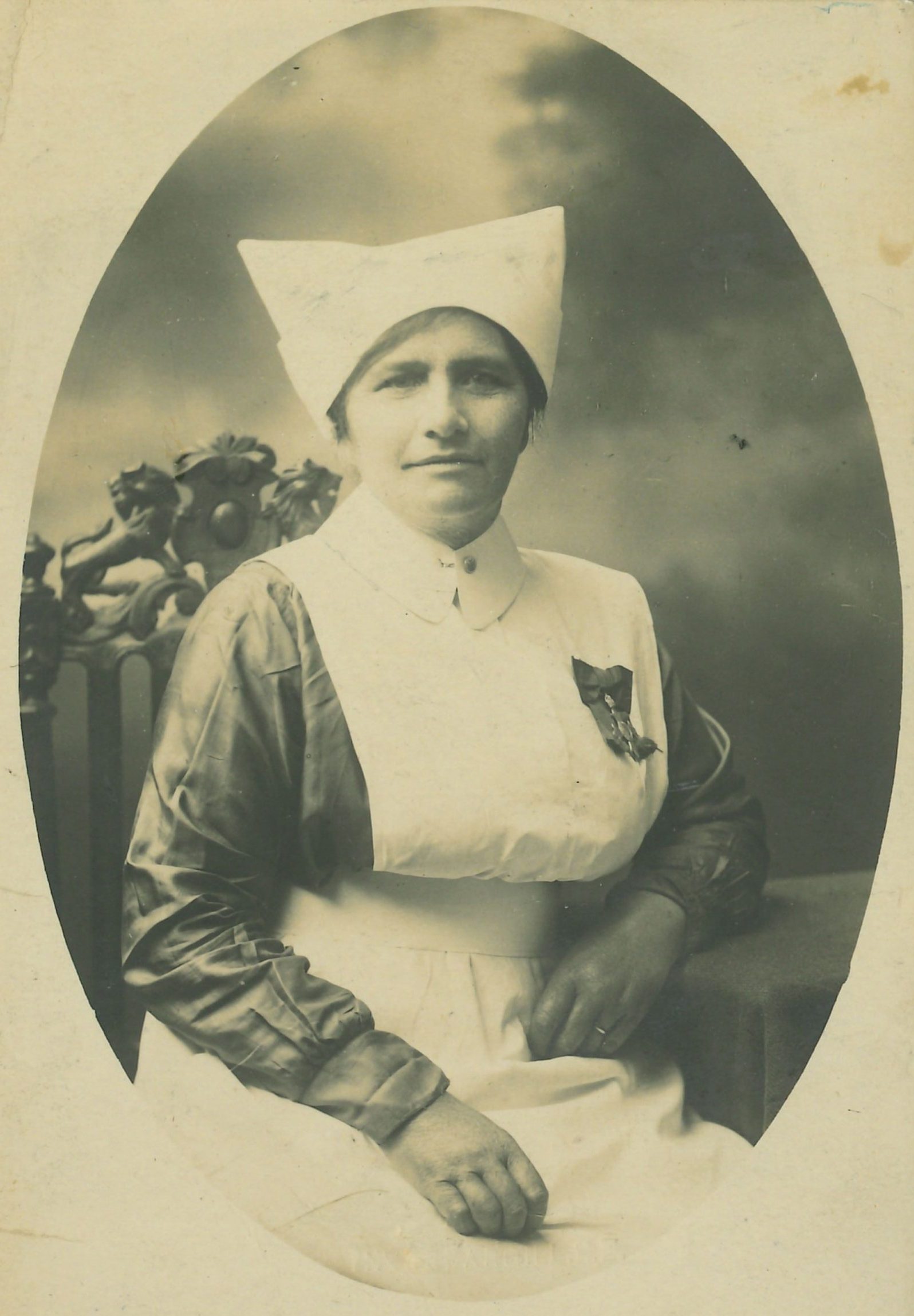 She was not the only woman to live a life of service. Examples of selflessness and caregiving fill the pages of the book.

Consider Martha Tahumu Spencer, who organised the delivery of thousands of tītī to Māori soldiers overseas during the First World War, one of many support initiatives for which she was awarded an MBE. The tītī deliveries were made possible by a countrywide fundraising effort, based on concerts, auctions, and sales of crafts. One can only imagine the morale boost to troops to receive such a favourite kai from home. (Strings of dried pipi were also sent.)

The bylines of some entries are so unique, so remarkable, as to make you marvel that such a person could exist — and then to wonder why it has taken until now for their stories to become known to the wider public. 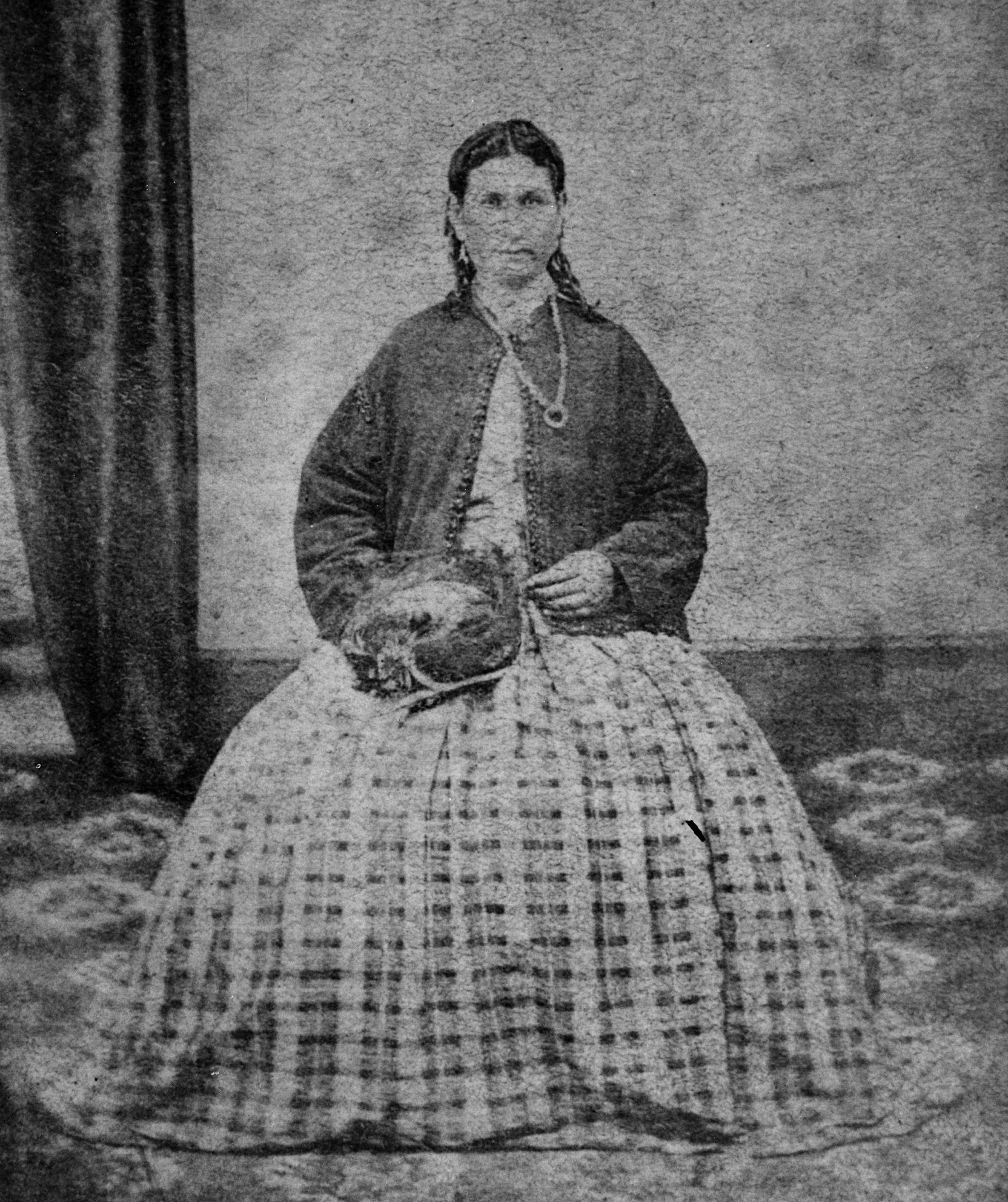 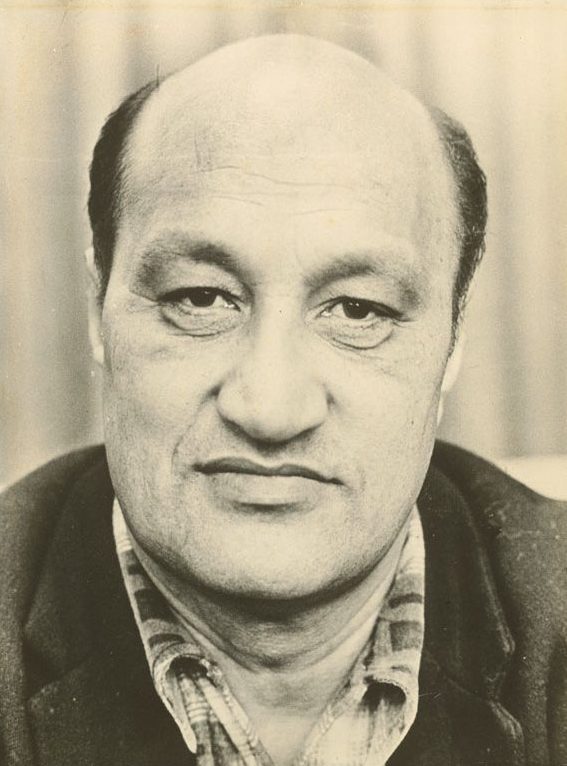 Here is Erihāpeti Pātahi, born around 1812, died 1874: “Wahine mātātoa, storyteller, adventurer, gold prospector, pounamu fossicker.” Her story amply bears out the “adventurer” description. Once, shipwrecked on a voyage bound for Sydney, she swam ashore with her husband, probably saving his life. Years later, she swam across the flooded Taramakau River to rescue a waka. And that’s only skimming the surface of a fascinating life.

The earliest entry, chronologically, is a woman known only as Tokitoki, born a mere 25 years after James Cook’s first visit. Her entry, too, has an intriguing byline: “Woman of mana, cultural intermediary, overseas traveller.” According to the entry, she is the earliest known woman within the iwi to have had a Pākehā partner, and the earliest to travel overseas, visiting Sydney with her husband in 1823.

Pick almost any page at random and something will strike the reader and inspire. Consider Joe Karetai of Little River, a man with a laugh “like a lion’s roar”, a raconteur, a singer and player of blues guitar, also a fearless and determined advocate for Māori interests and justice. At a speech of welcome to the Queen and Duke of Edinburgh in 1986, for instance, he took the opportunity to draw the Queen’s attention to injustices pertaining to Māori land, fisheries and education.

In early life, he had pledged to God to use his learning to become an ambassador for his people. And that is how he lived his life. “He became very strong, spiritually, physically and psychologically,” his biography notes. Among other roles, he was the South Island co-ordinator of a Māori foster-care programme that placed children within whānau, hapū and iwi, so that rangatahi who might otherwise have lost touch with their people could be woven back into their kin networks.

So often, in these biographies, such strength of character stands against the devastating impacts of colonisation. In an introductory essay on iwi history, Michael Stevens writes: “Economic marginalisation and poverty substantially defined the colonial encounter for most Ngāi Tahu families and villages.”

The statistics are devastating. He writes that 90 per cent of tribal members were landless by the close of the 19th century. They had been dispossessed of many of their mahika kai and were hemmed in on small, uneconomic parcels of Native Reserve land.

Michael Stevens elaborates on the root causes of landlessness: “The colonial state did not recognise traditional mahinga kai practices as establishing property rights and did not therefore protect those interests. The second cause was ‘racial amalgamation,’ an objective that actively informed government policy in New Zealand from the 1840s until the early 1970s.”

“This assumed that Māori individuals, especially those who had a non-Māori parent . . . would or should melt into colonial society — aided by exclusively English-language-based Native Schools from 1867. By this logic, Ngāi Tahu would, or should, eventually cease to exist as a people. This helps to explain why, until recent decades, the New Zealand government and the nation’s majority culture have ritually denied a collective Ngāi Tahu existence and many New Zealanders still struggle with the concept.”

Against this pressure, it is all the more remarkable that generations of Ngāi Tahu whānui have “rejected racial amalgamation and the biological arithmetic on which it rested”.

There is a deeply symbolic photograph showing the attorney-general of New Zealand addressing a crowd during the opening of a wharenui at Arowhenua, near Temuka, in 1905. The name of the whare is “Te Hapa o Niu Tireni” — the unfulfilled promise of New Zealand. The whare — and the challenge its name represents — still stand. 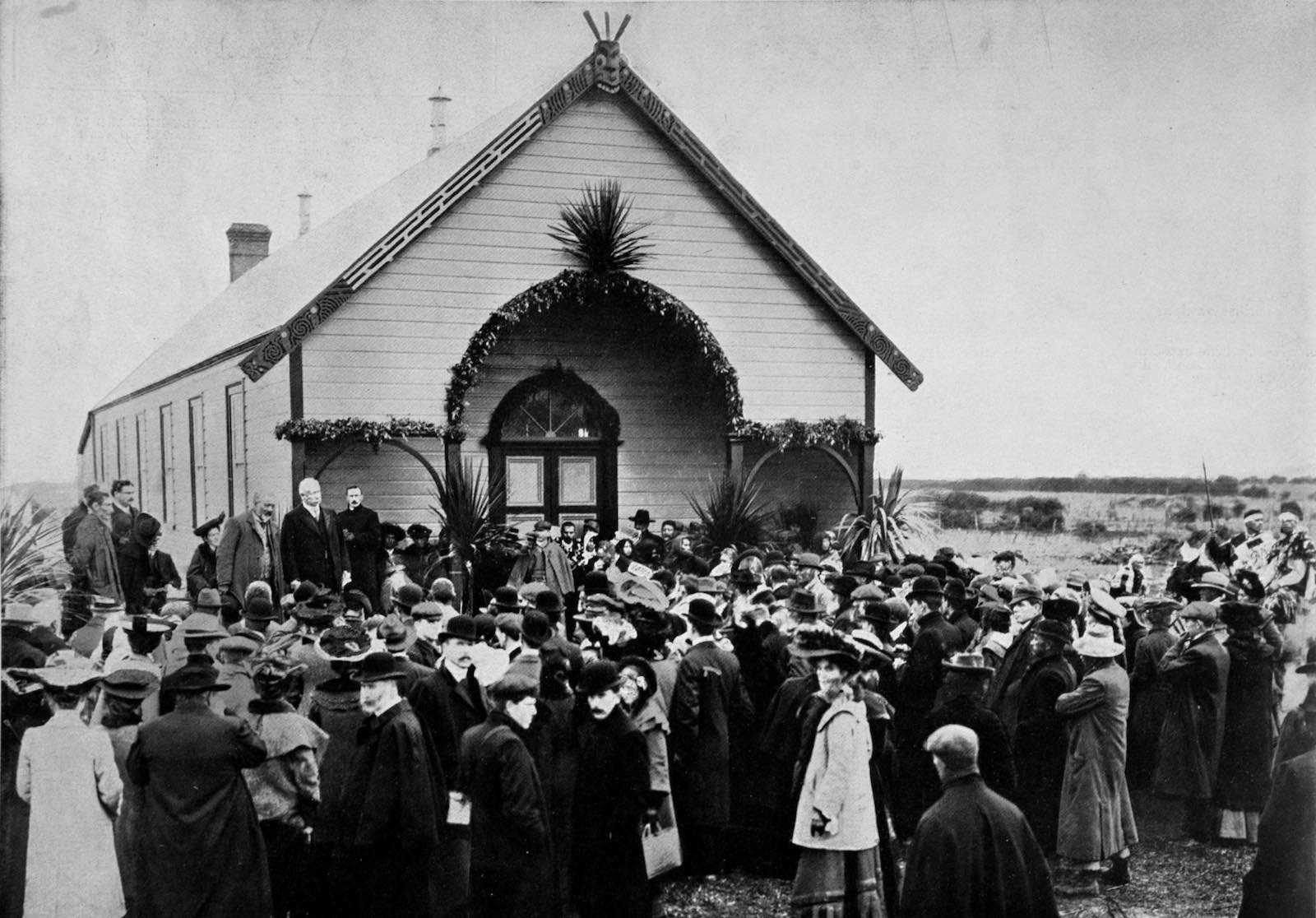 Attorney-General of New Zealand, Albert Pitt, addressing the crowd during the opening of Te Hapa o Niu Tireni II, Arowhenua, 15 June 1905. During the hākari, Pitt took questions from the floor. Not surprisingly, they all focused on the Ngāi Tahu land grievances. (Canterbury Museum, 1923.53.365)

Michael Stevens ends his essay with the thought that by collectively knowing the biographies of Ngāi Tahu ancestors, present-day tribal members can better know themselves. “In these uncertain times . . . it is more important than ever that we, as Ngāi Tahu, persist with that duty to our ancestors and unborn generations.”

For the country as a whole, that same kaupapa applies. At a time when the teaching of history is being revisited and revised, we all need to “better know ourselves”.

The life stories in this volume will help achieve that purpose, for anyone who cares to read them. And for those who have collected and told these stories, the words in the book’s dedication are true and apt: “The fruits of your labour are a feast for the masses.” 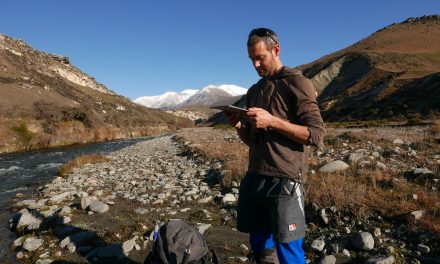 Walking as a pathway to knowing 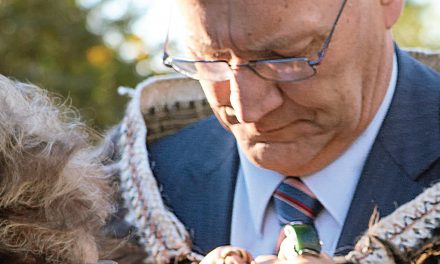 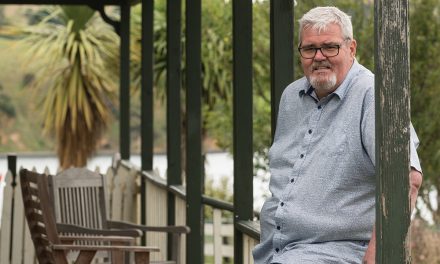 He maimai aroha: A tribute to Tahu Pōtiki