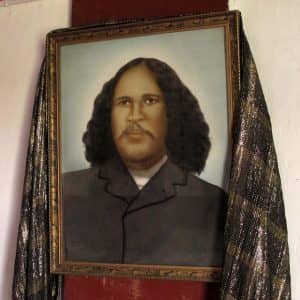 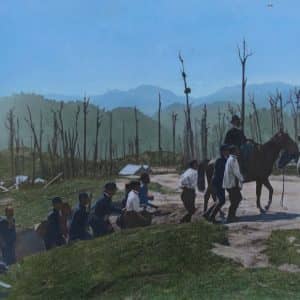 Rua Kenana and other prisoners led away from Maungapōhatu. (Alexander Turnbull Library) 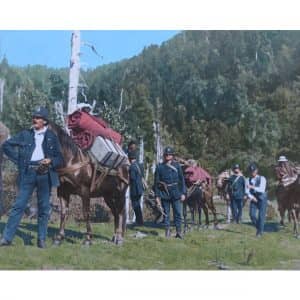 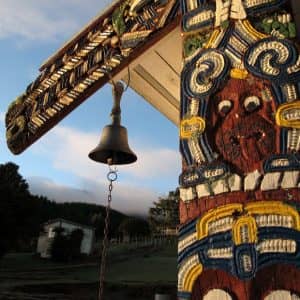 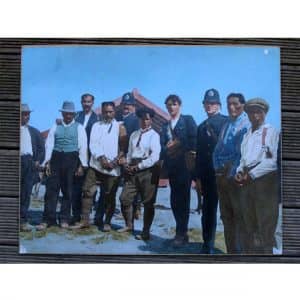 Police with some of the arrested members of Rua’s community at Maungapōhatu. Rua is third from left. (Alexander Turnbull Library) 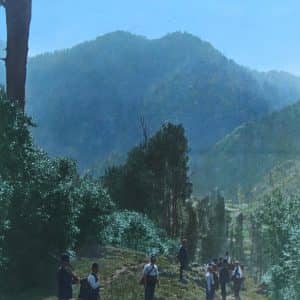 This Sunday, 100 years ago, a notorious arrest took place.

It happened at Maungapōhatu — Tūhoe’s sacred mountain and site of a messianic community established by prophet Rua Kēnana.

Sunday, April 2, 1916, Police Commissioner John Cullen led a column of 57 sweating constables, armed with automatic pistols and carbines, up a steep path from the valley below. They had walked all the way from Ruatāhuna, deep in the forest heartland of Te Urewera, to apprehend the prophet on charges of sedition and resisting arrest.

In a show of contempt, Cullen flouted protocol and rode his horse on to the marae and up to a newly built wharenui where Rua stood with two of his sons. Cullen demanded Rua’s immediate surrender.

From somewhere, a shot was fired — it has never been determined from which side — and a short but disastrous exchange of fire left Rua’s son Toko and his uncle, Te Maipi, dead and several on both sides injured.

Further horror followed. Descendants speak of rape and torture. Several men were mock-buried in an open grave. Jewellery, money and greenstone taonga were pillaged as trophies.

The events of that day have seared Tūhoe’s memory, and continue to do so, despite Crown apologies and a landmark treaty settlement.

Rua’s arrest was part of a vendetta born of wartime paranoia and intolerance. These were jingoistic times. The First World War was being fought in the mud and the trenches of Europe. Memories of Gallipoli were still fresh in people’s minds.

Despite the fact that Rua’s community had called itself Te Maungarongo, the people of lasting peace, Rua and his followers were suspected of treasonous intent. In the newspapers, Rua was painted as a dangerous renegade and branded “the Māori Kaiser.” It was said he welcomed a German victory, and that he had built up a cache of weapons “obtained from Assyrian hawkers.” His influence had to be neutralised.

The pugnacious Cullen — nicknamed “Czar Cullen” by historian Mark Derby on account of his head-cracking style of policing — had been successful in breaking the Waihi miners’ strike in 1912. Now he was sent in to extract Rua from his “stronghold.” A report at the time suggested that “overwhelming force” might be required.

From houses on the hillside above the wharenui, the community would have watched with mounting dread as the police massed in front of the marae. Many of Rua’s followers had been children during the military invasions of Te Urewera during the 1860s. “They could recall the hunger and the pain, the smell of smoke from the burning kāinga, the thud of muskets and the cries of the wounded,” wrote Derby in his book The Prophet and the Policeman. “They knew what it was like to be helpless as an invading army incinerated their homes and destroyed their crops.”

As the police approached, Rua and his sons stepped off the verandah and walked forward to welcome their guests. But being a “guest” was the furthest thing from Cullen’s mind, and he wasn’t about to wait to be invited on to the marae. “I was entitled to go armed to a man whom I knew to be a desperado,” he said later, justifying his belligerent approach.

Cullen expected armed resistance, but the police were greeted in peace. “Rua didn’t resist at all,” admitted one of the police officers years later.

The government expected conspiracy, but none was found. As for the weapons, they turned out to be mostly ancient rifles incapable of being fired.

Rua’s trial took 47 days, the longest in New Zealand legal history — a record it held until 1977. All the charges against Rua were dismissed, partly because, in his haste to apprehend the “desperado”, Cullen conducted his operation on a Sunday, in breach of the Lord’s Day Observance Act.

The jury rejected the charge of sedition and found Rua guilty only of offering “moral resistance” (as distinct from physical resistance) to constables who had sought to arrest him months earlier for the illicit sale of alcohol — a charge for which he believed he had already served time.

But that offence was enough for the judge to hand down a severe sentence of a year of hard labour followed by 18 months’ imprisonment.

“With his sentence,” wrote Judith Binney in her magisterial history of Tūhoe, Encircled Lands, “[Judge Frederick] Chapman befriended the prejudice and hysteria lurking in society” —  attitudes that would surface again in the Urewera raids of 2007 and their aftermath.

As well as punishing Rua, Chapman levied the entire cost of the police operation on Rua and his community. It crippled them, and the community never recovered.

The one bright spot in Rua’s arrest, trial, imprisonment and financial punishment was the jury’s response to the verdict. They were dismayed. Eight jurors sent a petition to parliament objecting at the harsh sentence. Among the deep concerns they expressed was this: “We feel that the verdict as recorded is not our verdict and that in consequence Rua Kenana has been sentenced for a crime of which we did not find him guilty and will undergo a punishment [which] we feel is not according to our determination or to our consciences.”

“Our sympathies were and are entirely with Rua, both as to his treatment by the Magistrate and by the Police,” the eight jurors continued. “He was of the opinion that he was being persecuted and in that respect we shared his opinion.”

Such an action was unprecedented, but the jurors’ plea for a pardon or early release was ignored.

The moral light of these jurors could not penetrate the darkness of institutional racism. In a report commissioned to establish whether the Maungapōhatu community needed assistance, Captain Herbert Macdonald wrote: “No anxiety need be felt as to Rua’s wives or children starving. Natives always help one another and if they ever become short of food they will either go back to their own people, or get married to other Natives.”

Judge J. W. Browne of the Waiariki Māori Land Court added: “The Tūhoe Natives are, if anything, more communistic than any other section of Natives in New Zealand … The offer of help too might possibly be misunderstood. It would probably be considered by most of the Natives as an indication of weakness on the part of the Government, and an acknowledgment that Rua had been badly used. The best way to assist them and help European settlement at the same time will be to send the Land Purchase Officer into the district to continue the purchase of their surplus lands.”

The agenda, as always, was to prise open Te Urewera for Pākehā interests. With impeccable timing, on the very day that Rua was sentenced, William Massey’s Reform Government introduced legislation that validated its illegal purchasing of Urewera land.

When I was writing about Tūhoe for New Zealand Geographic in 2012, I visited Maungapōhatu to meet some of Rua’s descendants and to acknowledge the history that was forged here. The wharenui still stands. I stood on the verandah where Rua faced Cullen. I stood in the river the police crossed as they prepared to apprehend the prophet. I walked through Rua’s derelict house, which should be a nationally respected historic place, but instead is full of old possum carcasses and is collapsing through neglect. I stood next to the cabbage trees in the urupa and climbed the lower slopes of the sacred mountain. And on a borrowed violin at sunset, I played Fritz Kreisler’s tune “Liebesleid” — love’s sorrow — hoping to add the sweetness of that music to a place that has felt great bitterness and grief.

I cannot get out of my mind — and do not wish to — the words of Judith Binney, describing interviews with descendants of the people of Maungapōhatu as she was writing the prophet’s history. She said that the photo of Rua’s arrest became crumpled and stained with tears from those she showed it to.

“Bitter as gall,” she wrote, are the memories of the people of the events of that day in 1916, Maungapōhatu’s Bloody Sunday.

Tūhoe have been called the people of the mist. Mist and fog are a metaphor for forgetting, and Maungapōhatu 1916, like Parihaka 1881 — or Ruatoki 2007 — must not be forgotten.

What George Orwell predicted must not happen: “Everything faded into mist. The past was erased, the erasure was forgotten, the lie became truth.”