The Waikato War, not Gallipoli, was our defining conflict 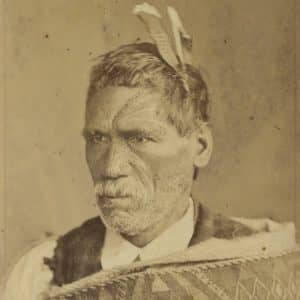 Rewi Maniapoto was regarded as a fanatical warmonger by many in the early 1860s, but this is not consistent with other evidence that the Ngāti Maniapoto rangatira sought peace. However, thanks in large part to John Gorst’s book The Maori King, the view has endured in some quarters. (Alexander Turnbull Library, PA2-1359, photograph by Elizabeth Pulman)

This is an edited extract from The Great War for New Zealand by Vincent O’Malley, published this month by Bridget Williams Books.

The Great War for New Zealand tells the story of what is, in my view, the defining conflict in New Zealand history. It did not take place on the Western Front, or at Gallipoli, or in North Africa. Instead, it happened right here, in Aotearoa New Zealand.

On 12 July 1863 the biggest and most significant war ever fought on New Zealand shores commenced less than 40 miles from central Auckland, as British imperial troops crossed the Mangatāwhiri River and invaded Waikato. In the days immediately before this, a government ultimatum was issued requiring all Māori living between Auckland and Waikato to pledge an oath of allegiance to Queen Victoria or immediately leave the region.

“Is the day of harvest close at hand?” asked Tamati Ngapora upon hearing the contents of the ultimatum. Ngapora and hundreds of other Waikato Māori living there quickly packed up what belongings they could carry and trudged back to join their relatives beyond the Mangatāwhiri. The day of harvest had indeed arrived. It was to yield a bitter crop for the Waikato tribes and would set back Māori and Pākehā relations by generations. This is the story of the Waikato War.

The war was in many respects a puzzle. Tamati Ngapora, an Anglican lay preacher, assessor in the Resident Magistrate’s court, temperance advocate, and firm friend of the Pākehā, had in the late 1840s, along with many other Waikato Māori, moved to Māngere, on the outskirts of Auckland, to protect the settlers there from possible attack by other iwi. Now, less than 15 years later, the Waikato people themselves stood accused of plotting the imminent massacre of the town’s residents.

It was a remarkable state of affairs, considering that Waikato Māori had recently been deemed among the most loyal and progressive in the country, with lands dotted with flour mills and signs of busy endeavour testifying to their economic success. To European eyes, they were well down the path to “civilisation”. Yet all that was to come to an end.

Following the Waikato War of July 1863 to April 1864, the once flourishing Waikato Māori economy stood in ruins — with villages destroyed, crops razed and livestock looted. An area that just a few years earlier had been a hub of colonial commerce, exporting produce to New South Wales, Victoria and even California, lay waste.

Worse still, hundreds of Waikato Māori had been killed, and many more were left crippled or wounded. Those who survived the war had been compelled to seek refuge with their Ngāti Maniapoto relatives south of the Pūniu River, which became the new frontier between Māori and Pākehā. The most valuable lands had been seized by the government for transfer to settlers. For the Waikato tribes, life would never be the same again.

Although the government failed in its objective of destroying the Kīngitanga, the Waikato War left the movement and its people seriously damaged. It had multiple and disastrous effects on the hapū and iwi caught up in the conflict. Alongside what appear to have been horrendous casualty rates, sweeping land confiscation crippled their economic infrastructure. Considerable deprivation and disease followed, and starvation was an everpresent threat in the years immediately following the war.

Yet these challenges, including the burden for tribes like Ngāti Maniapoto of hosting a huge refugee population with much reduced resources, were met with considerable communal strength and innovation.

The enforcement of an aukati (boundary line) between the King Country and Waikato from about 1866 onwards, and the fact that the tribes continued to preside over a largely autonomous district, are powerful symbols of this strength. Nevertheless, the painful legacy of war and raupatu (confiscation) continued to be felt and expressed in a number of ways, especially in the demand for the confiscated lands to be returned. That call was one that successive governments failed to heed.

The war was not exactly a tale of unmitigated gain for many Europeans. Suffering heavy losses of their own, many of the imperial troops involved were said to deeply resent fighting a war of conquest for the exclusive benefit of New Zealand colonists. And British taxpayers begrudged having to fund such a war out of their own pockets.

Not that the war generated the spectacular riches spoken of on its eve. Far from making a huge profit, the New Zealand government was plunged into debt, and the wider economy suffered recession that only began to be reversed under Julius Vogel’s scheme of immigration and public works in the 1870s.

For the military settlers planted on the newly confiscated lands, life was no bed of roses either. Without adequate capital, in many cases lacking even basic farming skills, and without the ability to defend themselves from attack, many sold their sections at rock-bottom prices as soon as they could, preferring life on the goldfields or anywhere but Waikato.

In the short term at least, the only group to do well out of the war were the Auckland speculators who bought up the confiscated lands at nominal rates and sat on their investments, waiting for the inevitable recovery in land values. Men like Frederick Whitaker and Thomas Russell were not only the architects of confiscation but also its chief beneficiaries.

These are stories that need to be told — and heard — if our nation is to reconcile itself to its troubled past, however uncomfortable that may leave some people. This is not merely a matter of resolving historical grievances, but of understanding and freely acknowledging that history as a way of moving forward. As the Waitangi Tribunal has commented: “While only one side remembers the suffering of the past, dialogue will always be difficult. One side commences the dialogue with anger and the other side has no idea why. Reconciliation cannot be achieved by this means.”

None of this requires feelings of guilt or shame, but simply a willingness to hear, read and embrace the difficult aspects of our past. And buried within this tale of loss and waste, with all of its attendant grief and misery, we might even find some uplifting elements if we look closely enough. Take, for instance, the principled idealism and bicultural vision of Wiremu Tamihana; Rewi Maniapoto’s insistence on fighting fairly and honourably, even when under horrendous attack; or even the sheer bravery of those few Pākehā who spoke out against the injustice of the war at a time when many settlers were baying for Māori blood.