‘Has the time come?’ 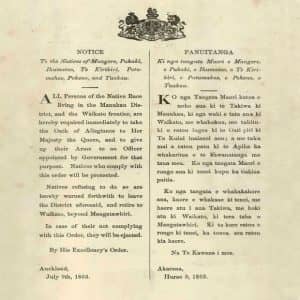 Many Māori understood the ultimatum of 9 July 1863, which required them to swear an oath of allegiance to the Crown, as demanding that they either fight for the Crown against their own relatives or leave the area between Auckland and Waikato. Nearly all chose the latter option. (Archives New Zealand, Te Rua Mahara o te Kāwanatanga, MA1 Box 835/1863/186)

From time to time, enthusiasts in towns around New Zealand band together to document the history of their community. It’s demanding and frustrating but it’s also a fulfilling exercise. Demanding because there are so many rich stories to be told. Frustrating because so many of the potential storytellers have passed on without sharing their experiences. But fulfilling, too, because so much can still be recorded — and can help families understand their origins and their links with the land they’re living on.

In Patumāhoe, nearly 10 kilometres north-west of Pukekohe, the locals are just about to see the fruits of the labours of an energetic team of researchers and allies who’ve been working on such a project for several years. It’s now in the form of a substantial coffee-table book to be launched late this month. Not surprisingly, it’s been a mostly Pākehā operation because this is a mostly Pākehā town.

There are historical reasons for that — not all of them wholesome.

Like all its neighbours, the Patumāhoe town (or “village” as some of the locals prefer to call it) is within that broad sweep of land that fell into Crown hands in 1863 when Governor George Grey decided to invade the Waikato and make that territory available for Pākehā settlers.

To their credit, the Patumāhoe researchers have dealt with the pre-Pākehā days and the early Māori-Pākehā contact.

But they stopped short of spelling out how the land that lies under their village was acquired. They’ve assigned Māori involvement to some distant past, as if the echoes and ramifications of that history aren’t still felt today.

In doing so, they have underplayed the price that Māori have paid in forfeiting their land and future there. And they shied away from pointing to the need for Pākehā to understand how fortunate they have been as beneficiaries.

Our family has certainly benefitted from that history, like many Pākehā families in that district. My father’s old man (from Northern Ireland) was able to buy more than 100 acres in the 1800s — and we’ve held on to half of that, milking a small herd of cows into the 1970s and then turning to fattening beef cattle.

Meanwhile, there’s work going on to prepare a Treaty claim for much of this South Auckland area. And one of the consequences is that we should soon see, in some detail, if we’re so inclined, how so much Māori land so quickly became Pākehā property.

No doubt there’ll be a pitiful amount of compensation for any of the unwarranted losses. There’s been no deviation from that routine since Treaty settlements began more than 20 years ago. There’ll be a reference by the government to a “full and final” settlement. And that will fall short, by nearly 99 percent, of fullness. That’s how it goes in this business. And the mainstream media will carry on as if that’s fair enough. As if there’s no need to take a second look at that.

And us locals will come to terms with it in our own way. Some unperturbed — and shrugging it off. Others disturbed, maybe wanting to do something about it, but not knowing what.

I helped with that Patumāhoe history project — and one contribution I offered was a brief final chapter where I was encouraging the readers to think about who’d been dealt a bad hand by our 19th-century history, and who had benefitted from it.

The Patumāhoe book team didn’t use the chapter. They thought it would make some people “uncomfortable”. So we offer it here. If we are to move forward together, we need to get past that discomfort.

When the history of Patumāhoe is recounted, the saddest part tends not to get the attention it deserves. It’s an inconvenient truth. It’s how Ngāti Tamaoho, who had made this district their home for generations, were forced to leave everything to make way for the British settlers.

Well. That’s not quite true. Tamaoho did have an option. Instead of retreating south to join their Tainui relatives, they could have opted to side with the Crown in its invasion of the Waikato. Governor George Grey’s proclamation in 1863 gave them that choice.

But, of course, that was really no choice. It was more like armed robbery. Ngāti Tamaoho had to leave their land, their gardens, their homes. Everything.

Perhaps that land grab was inevitable. Here were English, Scots and Irish sailing halfway around the globe to find a better life for their families — just as Polynesians had done centuries before. As their numbers swelled, the Pākehā newcomers naturally began to have more say. And it was too tempting for their politicians to fudge and forget the promises in the 1840 Treaty of Waitangi. Just as they do these days.

Also, it has been natural for these pioneers, and the generations who have been following on, to have been so absorbed in their work and their families that the plight of the former landowners hasn’t been their concern.

Not so for Ngāti Tamaoho. Long before Grey’s ultimatum, there was unease that the growing tide of white settlers was a threat that would engulf and overwhelm Māori. And the unease became a feeling of resignation. Of hopelessness.

So when the proclamation was made, it wasn’t a complete surprise. The response of one elder when he heard the news was simply this: “Has the time come?”

Part of their despair has been knowing and feeling their responsibility as kaitiaki or guardians of the land — but not having the means or authority to provide that care.

And not only being relatively helpless. But worse. Too often being treated as second-class by a disturbing percentage of other Franklin residents. Including a number of shopkeepers, teachers, and bosses.

It hasn’t been Tamaoho style to make a song and dance about those experiences. In fact, they have preferred to keep their pain and shame to themselves while they try to repair the mostly irreparable damage inflicted on them in 1863.

There is progress though. There are more and more Kiwi families with Māori whānau. And there’s a noticeable softening of attitude when Pākehā have Māori mokopuna. There are more schools, too, spending time on New Zealand history and on te reo and tikanga Māori. These and other small steps don’t amount to a revolution. But it is headway.

And among the new generation of Ngāti Tamaoho — just as with their neighbours Ngāti Te Ata and Ngāti Tipa — there are those young Māori who know the local history, know the unfairness and the losses, and know what a struggle it has been for their people.

Some are already following on from their kaumātua and kuia in trying to put things right. But that could take forever. Or generations at least.

The time hasn’t come for rejoicing that a solution is in sight. But the time has come for modern-day Patumāhoe families to be aware of the cost to Ngāti Tamaoho — and to recognise who are the beneficiaries.