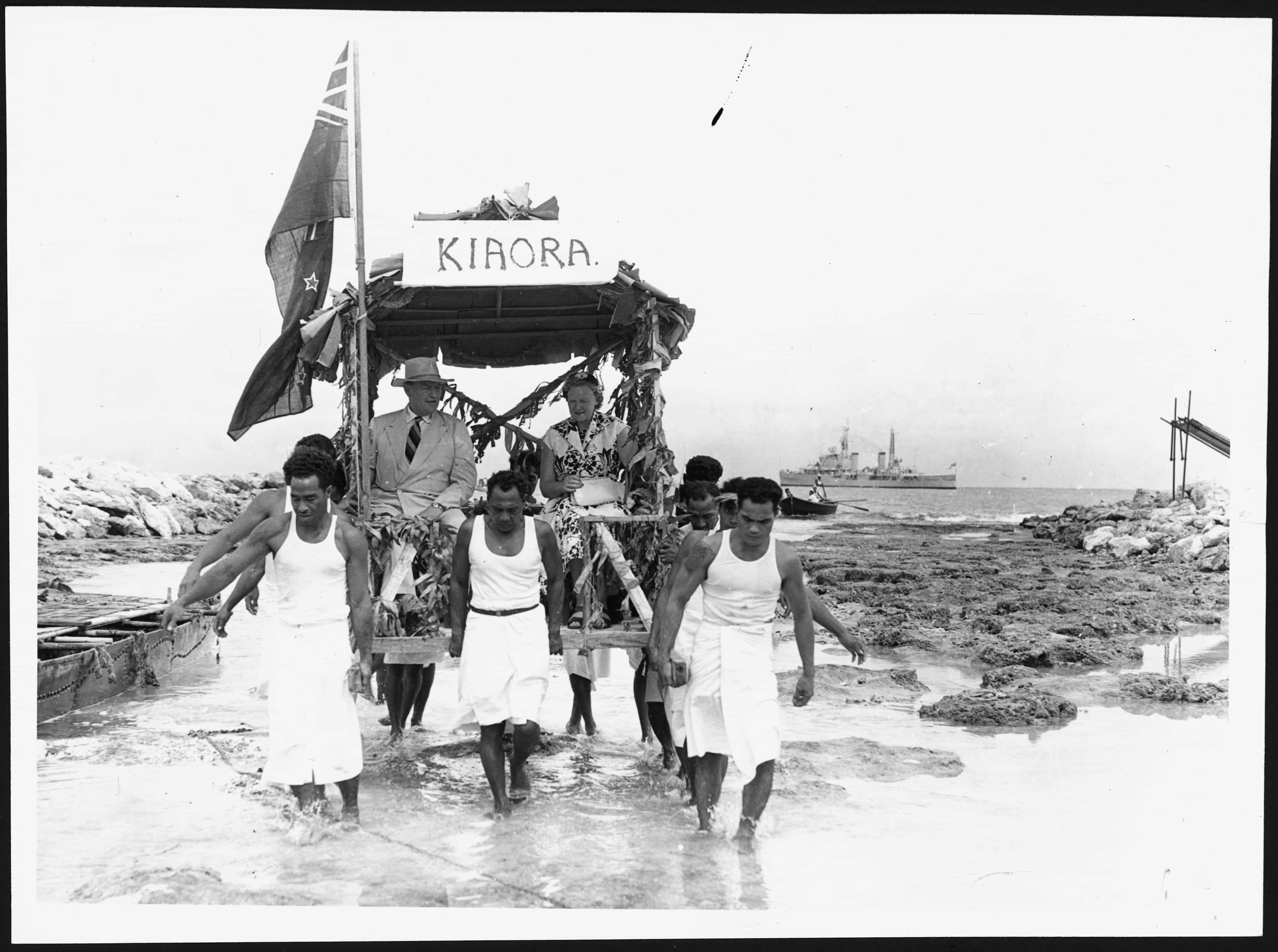 “It is a strange fact that New Zealand can be literally all at sea in the Pacific Ocean, and yet pay that ocean, and neighbours and relations within it, so little attention,” writes Damon Salesa.

In his essay on New Zealand and the Pacific Ocean, published as part of a collection in New Zealand and the Sea (Bridget Williams Books), Damon argues that Pacific history and Pacific stories can throw a different light on our understanding of New Zealand. Not many New Zealanders know, for instance, that, at one time, New Zealand was busily acquiring a Pacific empire.

As Damon writes: “Having been a British protectorate since 1888, the Cook Islands and Niue were annexed by New Zealand in 1901, formally becoming a part of New Zealand. Although, in 1899, Sāmoa had been signed away to Germany and the United States by Britain, the outbreak of the First World War provided the opportunity for New Zealand to invade and occupy the German colony, and in 1920, the League of Nations recognised Sāmoa as a New Zealand colony. (The same process also gave New Zealand a share in the colonial rule of Nauru.) Five years later, Tokelau was made a New Zealand territory, completing the acquisition of what some saw as a small empire, but which was more properly seen as a vast ocean territory.”

It was New Zealand’s colonising ways in the Pacific that made it a focal point for certain Pacific nations.

“The Cook Islands, Niue, Tokelau, and Western Sāmoa turned towards New Zealand and have not looked away since. But even nations that were not formally New Zealand’s — especially Tonga, Tuvalu, and to some extent Fiji — forged relationships that have defined aspects of their present.”

After the Second World War — which had seen the establishment in the Pacific of “a new network of seaways, with new high-volume ports constructed on many Pacific islands”, and “a new network of oceanic airways” — there was more change, as Damon explains in this extract from his essay. 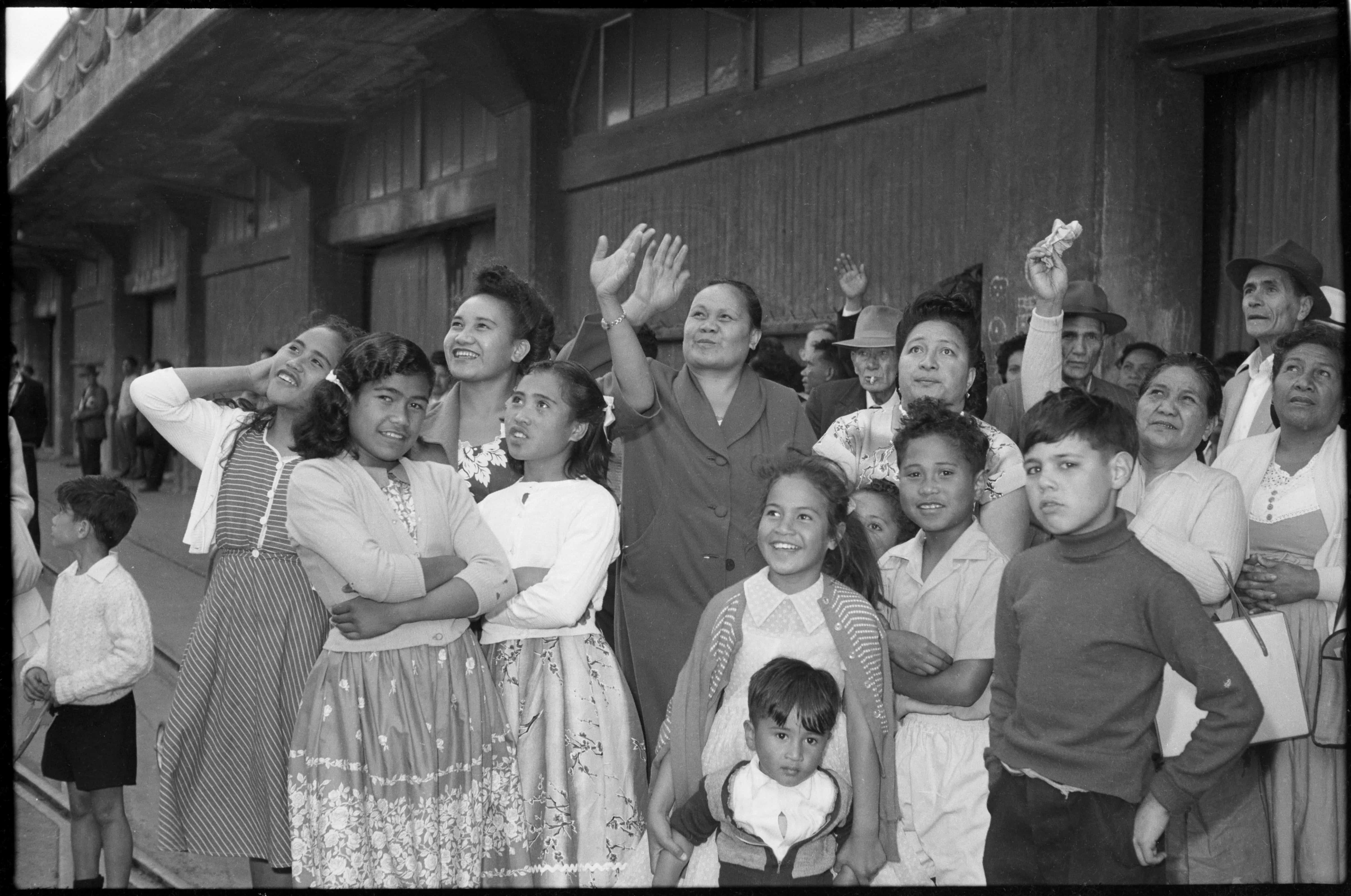 The remaking of New Zealand’s relationship to the Pacific was taking place as the ocean itself was undergoing two other epochal changes: decolonisation, and a period of mass Pacific migration. Both of these were transformational, reorganising people’s lives and opportunities on a massive scale, and altering relationships within the Pacific.

New Zealand, along with Hawai‘i and the United States, was the major destination for post-war Pacific migration. While in 1945 there were 2,159 Pacific people in New Zealand, this nearly quadrupled in the next decade, and by 1966 there were 26,271.

The origin of these Pacific peoples was not diverse, and showed the deep connections created by New Zealand’s previous colonial relationships. Most of these people came from just a few nations, all of which were within what I have called New Zealand’s Pacific: Sāmoa, Niue, Tokelau, the Cooks and Tonga. And, by the 1980s, most had come either by plane, or via New Zealand’s maternity wards.

The process of decolonisation was central in the way that New Zealand’s Pacific migration unfolded.

Colonialism had done little to develop or educate those people it ruled, so for many Pacific — especially Polynesian — people, leaving their homelands was often seen as one of the few routes to economic and social advancement.

But decolonisation, for New Zealand as for other empires such as the United States, Britain and France, was partly about regulating this movement of peoples.

Much as the independence of Algeria, Papua New Guinea or Pakistan led to restrictions on access to the metropole for their people, the formal decolonisation of Sāmoa in 1962 empowered New Zealand to put in place restrictions on Sāmoans. These began with the economic downturn in the 1970s.

The different conditions of decolonisation for the smaller islands — the Cook Islands (1965) and Niue (1974) — kept them as part of the Realm of New Zealand, giving New Zealand some powers over those nations; Niueans and Cook Islanders kept New Zealand citizenship.

For New Zealand, the process of decolonisation proceeded without the deep unrest and violence seen elsewhere. This should not be taken for granted, as New Zealand’s colonial rule was characterised by unease and often hostility, punctuated with moments of violence.

But the frame of decolonisation in the Pacific had also been designed to secure New Zealand both benefits and leadership. Regional organisations such as the Pacific Islands Forum and the South Pacific Commission (now the Secretariat for the Pacific Community) were inclusive and responsive to New Zealand (and Australian) priorities, though this would not continue unchanged or uncontested.

Nor was involvement simply pragmatic: New Zealand remained a generous donor, and connections persisted partly because of a common recognition based — in some sense — on a shared ocean. 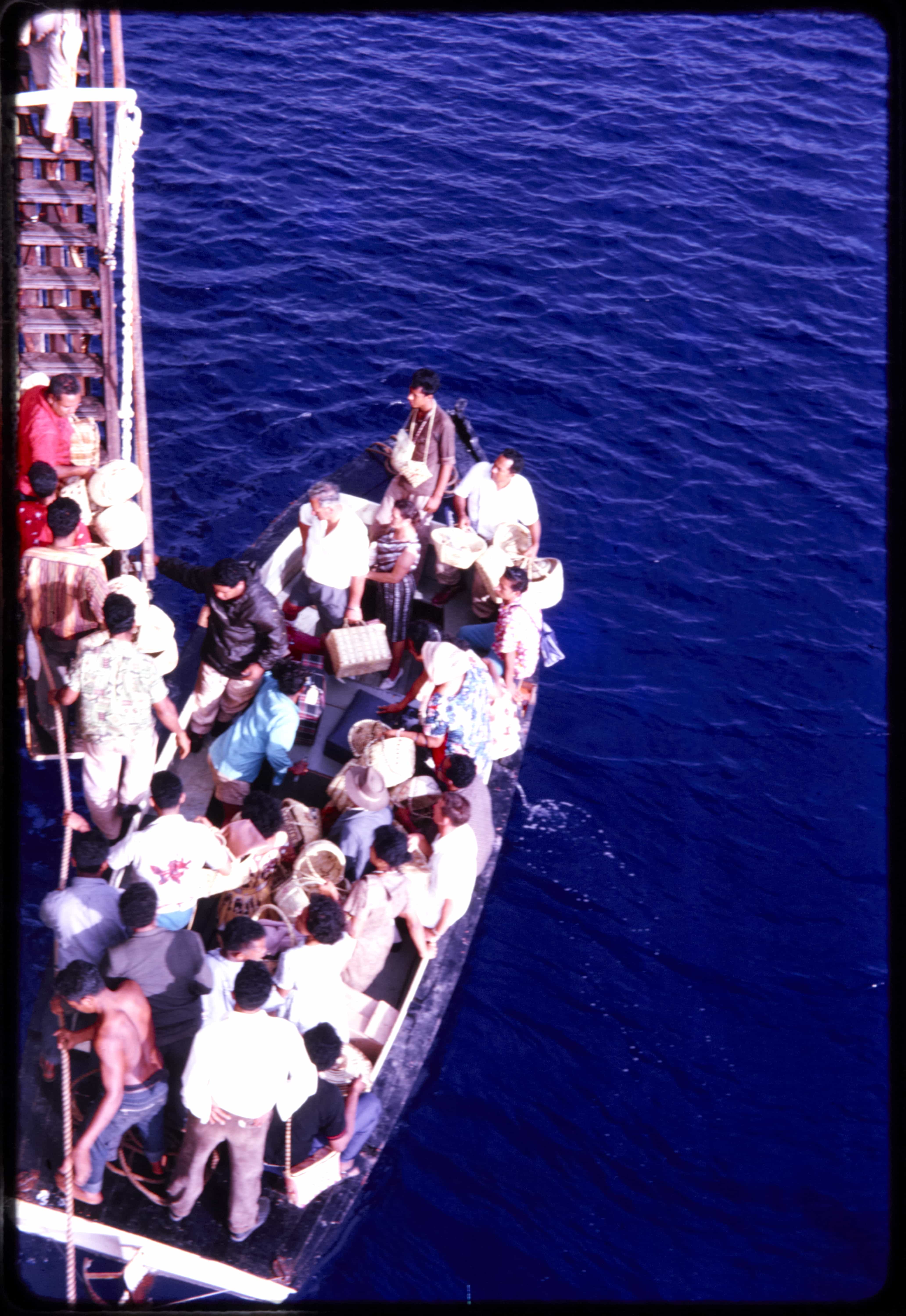 Between New Zealand and its Pacific neighbours, deep inequalities continued, and this was apparent in the vessels that ran between them. People were now mostly travelling on planes, but things were still mostly on ships. Very rarely did any of the other Pacific nations retain a positive trade balance with New Zealand.

New Zealand has continued to make substantial profit in the Pacific across a range of services and products; indeed, some years it is only its Pacific trading partners that create profits for New Zealand. As they did in the 1920s, ships leave New Zealand full and come back with less; or filled with things of far less value.

A step towards decolonising the sea, quite literally, came with the change in the international law around the Pacific Ocean. The United Nations Convention on the Law of the Sea (UNCLOS), which opened for signature in 1982 and came into force in 1994, established, amongst other things, the Exclusive Economic Zones 200 nautical miles out from nations’ coastlines.

This development was not an indigenous construct, and severely disadvantaged some Pacific nations. Sāmoa, for instance, has neighbours on each side, meaning that in no direction does its maritime EEZ boundary reach out to the maximum 200 miles.

But UNCLOS also gave some certainty to Pacific nations, limiting many rights, but affirming some key ones. This also ensured that Pacific nations could be recognised as they truly are, not just as collections of small islands, but as “large Ocean nations”.

International boundaries, like the concept of airways, have an ethereal quality: but in both cases this disappears when ships make port, or aircraft land. Quickly matters become quite concrete.

In our modern age, few things are controlled quite as tightly as ports and airports, where duties and passports, taxes and visas are much in evidence. In these spaces, perhaps more than any others, the power of states and governments is observable. Yet here, too, there continue elements of the Native Sea: the airport, too, has been indigenised, and not only in Sāmoa and Tonga, but in New Zealand. 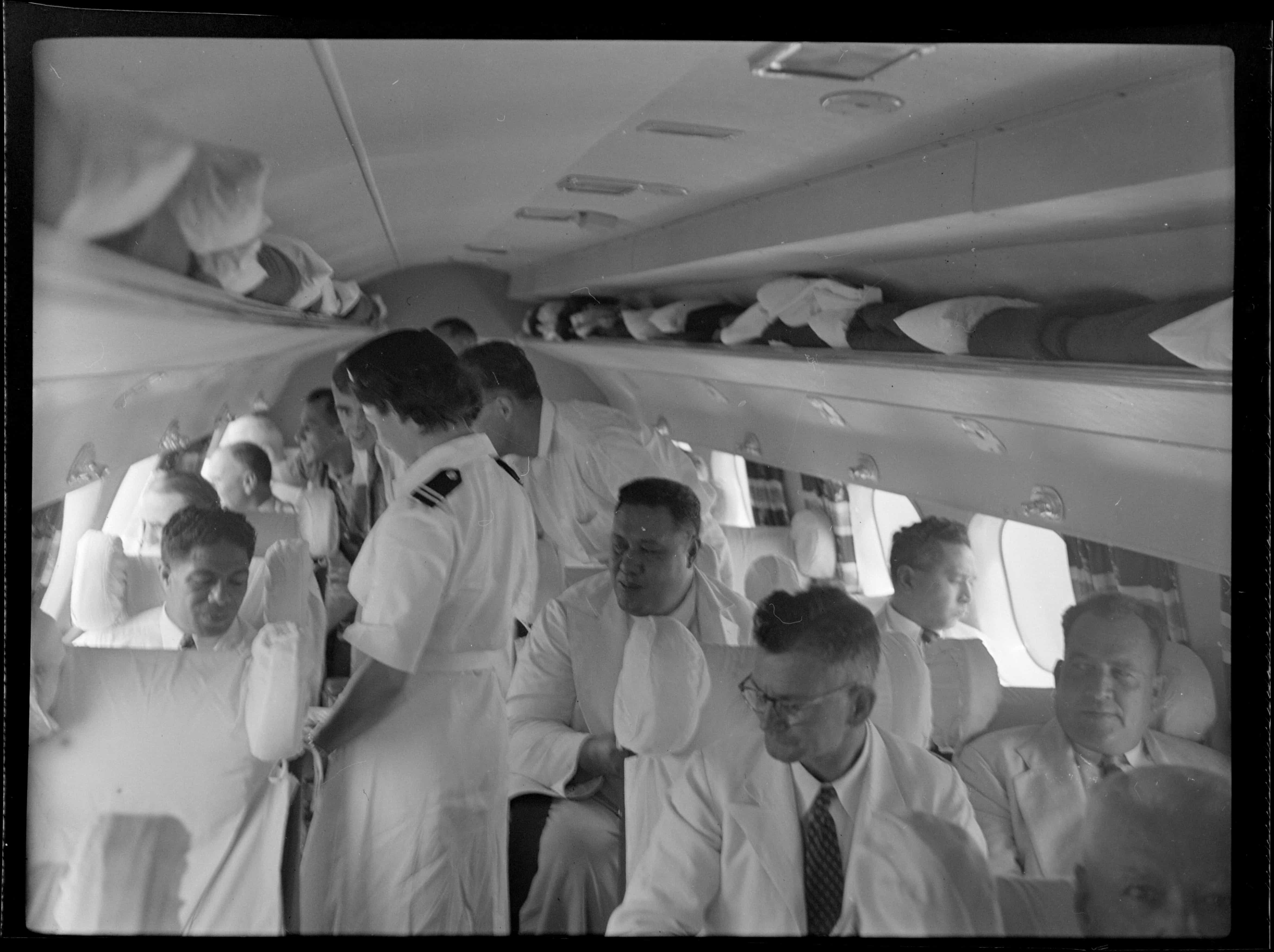 His Highness Malietoa Tanumafili II and His Highness Mea’ole with other passengers on board a TEAL aircraft at Satapuala, Upolu, Sāmoa in 1952 (Photograph by Whites Aviation, Alexander Turnbull Library.)

Auckland Airport’s local MP, a Sāmoan, calls Mangere “the gateway to the nation” and he is not mistaken: nearly 75 per cent of New Zealand’s international arrivals come through that one set of doors. The airport employs around 22,000 people and claims an annual impact of perhaps more than 20 billion dollars. Every day, 65,000 vehicles transit the airport corridor.

It should interest us that this economic powerhouse — one of the most secure, productive and surveilled public spaces in the country — has, in small and important ways, remade itself as a Pacific place, accommodating Pacific practices and rituals of hospitality and travel.

Arriving at Auckland International Airport can be unlike arriving at any other New Zealand airport. Depending on when you arrive, or where you arrive from, you may walk out of the customs hall into an empty barn-like area, or into a thronging arrival hall. Scores of seats placed in front can be mostly empty, or not just full but surrounded by people standing.

The key determinant is apparent to most Aucklanders: the arrivals hall overflows when flights arrive from Tonga or Sāmoa. Disembarking from tourist source nations, people quietly walk out towards their transport; arriving from the Pacific, people have family to meet them.

At such times what Auckland Airport most looks like — most feels like — is not the other big airports that it ranks alongside, whether Christchurch or Wellington, or Sydney or Brisbane or even San Francisco.

Rather, in those moments, the airports that Auckland is most like are much smaller, but no less bustling: Faleolo in Sāmoa, or Fua‘amotu in Tonga. There is something particular about Auckland’s connection to the Pacific that has now, in quiet and often invisible ways, been inscribed in the architecture of Auckland Airport.

At those times, there is what seems to be a small sea of bodies, relatives and friends, with quiet rituals and objects that mark not only the connection that New Zealand has with the Pacific, but how New Zealand itself has been transformed as a result.

Perhaps the most powerful example is a humble cardboard box, produced by Air New Zealand for people to bring cooked food from the Pacific islands to New Zealand. On the side its name is printed: as every Pacific person knows, it is an “umu pack”. And it is a proof that even in this age, Pacific people don’t travel like everyone else, even when their va’a — their vessel — is a va’alele.

At airports, we can still experience indigenous mobilities, redolent with the fragrance of ancient “Native Seas”. These should remind us that many dimensions of New Zealand have been constituted through similar acts of moving, and that these were never fully displaced by colonial or commercial forms of travel.

When we reflect on New Zealand and the sea, we might then remember that this “sea” is part of the Moana: a cultured ocean of stories and history.

This extract by Damon Salesa is from an essay in New Zealand and the Sea, edited by Frances Steel and published by Bridget Williams Books.

Damon is a scholar of Pacific politics, history, technology, culture and society. He is Sāmoan, born and raised in Auckland, and is currently director of Pacific strategy and engagement, and associate professor of Pacific Studies at the University of Auckland. He is also completing a Marsden research project on technological, social and cultural change in Sāmoa. 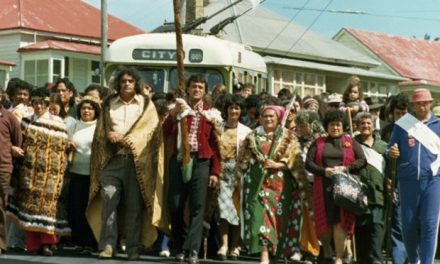 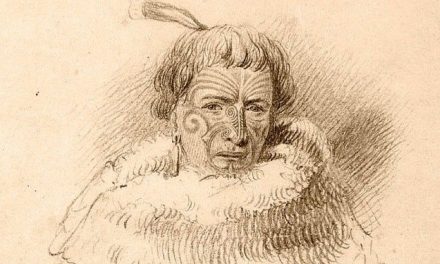 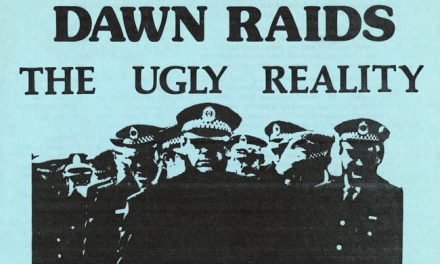 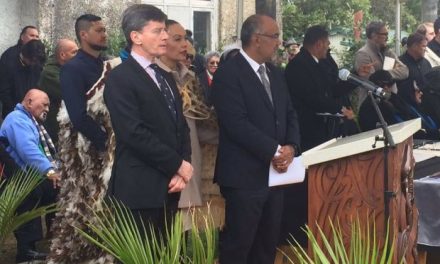 ‘Parihaka has waited a long time for this day’