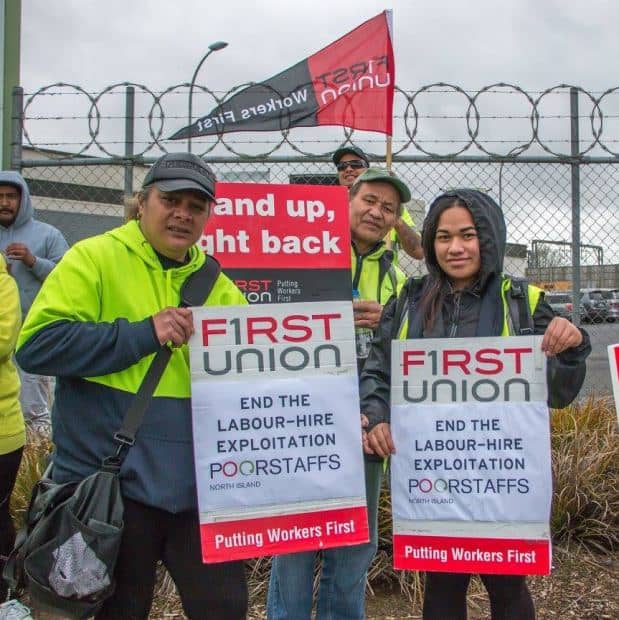 Labour hire workers — in most cases Māori, Pacific and recent migrants — are the most vulnerable and unprotected of all workers, writes unionist and lawyer Lisa Meto Fox. And, thanks to a private member’s bill which passed its first reading in parliament recently, we now have a chance of offering them more protection.

A couple of weeks ago, during the debate in parliament on Labour MP Kieran McAnulty’s private member’s bill — which aims to put protections in place for vulnerable labour hire workers — National MPs (who voted against the bill) argued that labour hire workers actually “enjoy” the flexibility of their impermanent jobs.

That’s no doubt true for the well-paid professionals they used as examples. But for those workers at the low-skilled, low-paid end of the spectrum who have little choice but to accept insecure and unstable work, “flexibility” is just a cruel joke.

The idea that they would choose to give up the protections of being a permanent employee — holiday pay, sick leave, KiwiSaver entitlements and guaranteed minimum hours of work every week — so they can sign up to open-ended contracts that allow them to be fired at any time, for any reason, without notice, is either deeply cynical or just wildly out of touch.

What these workers would enjoy is secure employment and a wage they can live on.

Unfortunately, with more and more companies insisting on employing only through labour hire or temping agencies, that’s become as much of a pipe dream for many workers as being able to afford rent on the minimum wage.

Our most vulnerable workers

Labour hire workers are the most vulnerable people I meet as a union lawyer.

Many are mothers returning to work after having children, young people who’ve just finished secondary school, and recent migrants to New Zealand.

And they’re almost always on the minimum wage (which goes up by 75 cents to $16.50 an hour from today). Many work in supermarkets and distribution centres, courier and trucking companies.

The reality is that life is precarious for these workers.

Whenever I visit their workplaces, I’m always struck by a feeling of heaviness in the air, a kind of bone-heavy weariness that comes from insecurity and being in survival mode for too long — unable to thrive, save, or plan for the future.

Labour hire workers never know whether they’ll have a job tomorrow, or if they’ll be able to make the rent next week, or have enough petrol in their car to get to work, or afford lunch for the kids.

If they get sick, suffer a bereavement, or take leave, they can find their hours cut — or they’re “let go” without notice. (This happened to a woman on one of my sites. She collapsed in a cold store at work and spent two weeks in hospital, only to be told on her return that she was no longer required.)

Even to rent a house or get a bank loan is difficult, because landlords and banks want to see proof of permanent full-time work, which labour hire workers can’t provide, even though they may have been working full-time for the same company for years. This means they’re often forced to borrow from unscrupulous lenders at much higher interest rates than the bank.

Many are so fearful of losing their jobs that they’re reluctant to complain about anything — or even to join the union. They don’t want to risk coming across as ungrateful, or to give the employer any reason to dismiss them. Most are barely making ends meet, so to be fired and then have to face a mandatory 13-week stand-down before they can get on the unemployment benefit, is too great a risk for them.

Women especially have another layer of vulnerability. Although women across all industries and types of work are vulnerable to sexual harassment, labour hire workers have the least protection.

Last year, on one of my sites, a complaint was made against a manager who was accused of harassing several women. One of the women was a labour hire worker and the other a union member who was on permanent staff. The union member laid the complaint with the company. She was supported by other members, the delegates, and me as the union lawyer — and the manager was eventually terminated.

But the labour hire worker went home in tears and never returned. We tried to get in touch with her, but contact details for labour hire workers aren’t held by the host company — they’re held by the agency, which refused to give us her details, citing privacy concerns (as they invariably do).

So why would anyone choose this?

Perhaps the more important question is why we as a society have been willing to tolerate this exploitation of our most vulnerable workers.

This is part of a larger conversation we need to have about underemployment, security of work, and the standard of living you should be able to expect in Aotearoa.

Labour hire workers are part of a growing trend towards insecure work, which is rife in our communities and has become more widespread over the last decade.

I don’t think it’s a coincidence that the rise in insecure work mirrors the rise in homelessness on our streets.

It’s difficult to get accurate statistics, but anecdotally, we believe the number of labour hire workers in New Zealand to be in the hundreds of thousands.

As the Employment Court noted in a decision delivered last November, these arrangements enable companies to sidestep “the usual responsibilities and liabilities associated with an employment relationship”.

Of course, there are times when a company has legitimate reasons for taking on temporary workers as labour hire or on fixed-term agreements.

But the trend over the last decade has been for businesses to use labour hire (and fixed-term agreements that keep getting extended), not to fill a temporary vacancy or need in their company, but as a business model. In some companies, labour hire workers have been steadily replacing permanent jobs, and (by our estimates) now account for as many as 50 percent of their workforce.

In fact, we’ve seen numerous cases of people who’ve been employed as labour hire at the same company for 10 years or more — without ever being offered the security of permanent employment.

In January this year, for example, thanks to our campaigning, two women who’d worked as labour hire for a cosmetics company in Auckland for nine years were finally made permanent direct employees of that company.

Who gains from insecure work?

But, while insecure and unstable work takes an emotional and physical toll on workers, the benefits for businesses are obvious.

Businesses can cut costs by not having to pay full-time or regular work hours, or the minimum payments due other employees: sick leave, holiday pay, superannuation contributions.

Labour hire workers fall into a murky no-man’s land, where companies can keep people on indefinite trial periods, turning workers on and off like a tap. They’re just another commodity that can be replaced at any time.

The other key reason is to undermine collective bargaining. At one site last year, labour hire kept working through a strike by permanent staff — and it was only after we’d signed up most of the labour hire, and they voted to strike, that the company settled.

A recent case heard by the Employment Court last year, illustrates many of the concerns that unions have about labour hire work in New Zealand.

It involved two labour hire workers who were employed at an airline catering company in Auckland, LSG Sky Chefs. One of the workers had been employed for two years and the other for around four years. Both were immigrants with limited English, and had been hired through a labour hire agency called Solutions, also trading as Blue Collar. Solutions paid the workers’ wages, and were in turn paid by LSG, an amount which included their wages plus a profit for Solutions.

This arrangement allowed LSG and Solutions to treat the workers as contractors, rather than employees.

The workers, supported by E tū union, asked the Employment Court for a declaration that they were in fact employees of LSG Sky Chefs. Both LSG and Solutions argued that neither of them was the employer, which meant that neither was responsible for their working conditions.

As the court noted: “It goes without saying that these increasingly complex models give rise to increasing degrees of murkiness as to who, if anyone, bears what responsibility for working conditions.”

The Employment Court agreed with the workers, ruling that the catering company was the employer. It noted that both workers were clearly vulnerable, with little knowledge of New Zealand, and “very little appreciation of New Zealand employment law, or the documentation they were asked to sign” by the agency.

Both worked for the minimum wage or just above, with no holiday pay, sick leave, or KiwiSaver entitlements. One of them was a young mother who once worked 34 days in a row without a break and up to 62.8 hours a week. The workers also had to pay their own ACC cover — and in the case of the young mother, this amounted to $3,000 one year. A shocking amount, which she dutifully set about paying.

For LSG, the arrangement was a win-win. “It meant that the company was not troubled with the usual responsibilities and liabilities associated with an employment relationship,” said the court.

Another “identified” bonus for LSG was that labour hire workers would be able to work through any strike action.

Although the Employment Court decision was significant, the reality is that most labour hire workers don’t have the resources to have the employment court determine who their employer is.

Legislative change is the real key to closing the loophole of triangular employment arrangements.

If the bill becomes law it will make it harder for businesses to outsource their responsibilities for their workers.

In the meantime, we continue to fight for the labour hire workers in our network to be made permanent employees. Each time we negotiate a collective agreement, we work on joining them up to the union so they can get the same benefits as their fellow workers.

This means, for example, that they’d get paid the union rate ($22 an hour on some sites) rather than the minimum wage, as well as overtime rates and an allowance for night work.

We all have a responsibility to collectively raise the dignity of people in work. But employers especially must be reminded of their moral obligation to do right by the people who turn up to work for them every day.