Tuku Morgan: Who better than Māori to look after their tēina? 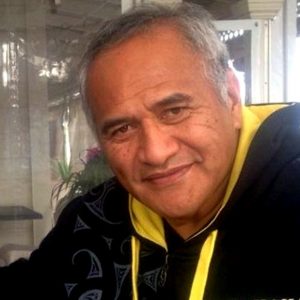 Tukoroirangi Morgan, who’s been the president of the Māori Party over the past 12 months, has set his sights on his party winning all seven Māori seats in this year’s election.

The 59-year-old had a taste of life as an MP when, in 1996, he won Te Tai Hauarau for New Zealand First — although he then had a falling out with Winston Peters and didn’t make it back into parliament for the Mauri Pacific party in the 1999 election.

This week he talked with Dale Husband on Radio Waatea’s Paakiwaha programme — confirming that Rahui Papa was the Māori Party’s candidate for the Hauraki-Waikato seat where he’s competing against Nanaia Mahuta, the sitting member.

But he also explained their “One Pacific — One Whanau” whereby Pasifika voters are especially welcome to join the Māori Party.

Here is an edited excerpt from that interview.

Tuku, the contest between Nanaia and Rahui is going to be a battle royal. But let’s turn to the party’s Pasifika kaupapa — which may compromise the Māori Party brand. The perception has been that the party is absolutely pro-Māori. Now it’s sort of pro-Māori and pro-Pacific.

As Māori in this country, we have mana whenua responsibilities of looking after people who come into our rohe. That is a custodial responsibility handed down from generation to generation. It is nothing new. To deny our cousins who are linked to us by blood and whakapapa is unacceptable.

We have to wrap our awhi around them too. And, like Māori, who’ve had their hopes and dreams thrown under the bus by the Labour Party and the other major parties in this country — who better than than Māori to look after and mentor our tēina in this country?

There is no way that we will compromise our tikanga, our culture and our mana whenua obligations. But part of those obligations is to look after Te Moana-nui-a-Kiwa. It’s convenient for people to turn a blind eye to our roots, to our whakapapa roots from whence we came. And our roots are unbreakable. It don’t matter how you cut it. We are one people.

And the Māori Party just happens to be the party that steps up and says: “Okay. We’ll look after our tēina. They will come with us.” Because that is our custodial responsibility as tangata whenua in this country, in Aotearoa. Pākehā won’t look after them. So, who better than their tuākana, Māori?

Will we see the Māori Party reaching out to other ethnicities too or are we just going to throw a blanket over Pasifika? Might we see Asiatic peoples tied up here as well and the Māori Party become something more of a multicultural political effort rather than driving for the whakaaro of tangata whenua.

Our tangata whenua aspirations will always be first and foremost. They are paramount. But part of the smorgasboard of opportunities is to take our tēina with us. That’s the first thing.

Second thing, I’m reminded by Tawhiao, the second Māori king, who said: Kotahi ano te kohao o te ngira e kuhuna ai te miro mā, te miro pango me te miro whero. Through the eye of the needle is threaded the white, black and red cotton. These are symbols of other ethnicities in this country.

At some stage, we have to work together. And we must. It’s a bit like reaching out to our tēina, to our Pacific Island relations. We, too, have to be the korowai for others who seek refuge in this country, who seek a sense of security in this country. That’s what we need to do.

And the Māori Party, as part of its obligations, will do that. Because that’s who we are as Māori people. We share our culture. But we, as tangata whenua, we’ll lead in a relationship that is hinged around our tikanga of manaakitanga, of looking after people. Of whakaiti, of humility, of aroha, of respect for each other.

Those are our cornerstone principles that we’ve been taught as kids, on our marae, in our communities. We will not forsake our principles. Those principles of manaakitanga, of looking after people, are what make Māori people who they are. Good people. People who care. People who want to provide service for others in need.