The racism that too few of the privileged can see 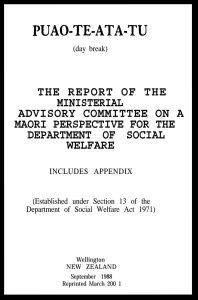 We can all understand plain old personal racism.

Like the time the friendly stranger at the bus stop struck up a conversation with me. Her farewell was: “I hope you have lots of nice little brown picaninnies.” It was like a scene out of Gone with the Wind. I stood there gasping like a goldfish as her bus pulled out.

Or the time when, as a toll operator, a supervisor pulled me up for kicking my shoes off. “Put those back on,” she said. “You’re not in the pā now.” I quite liked her before that. Turns out she was one of those nice racists.

Then there was the judge who admitted me to the Bar in the Rotorua District Court. In front of my entire whānau, he declared: “You’re a credit to your people.”

And, like many Māori, my name has been mutilated over airport terminal speakers and misspelled more times than I’ve had hot breakfasts. Now, whenever anyone asks me to spell my name, I answer: “How about you spell it and I’ll correct you?”

When my son went to King’s College, a private boys’ school, he was constantly asked if he was “on a Māori scholarship”. He’s been pulled over in his car by police countless times for no apparent reason. Once, he and his mates were driving slowly in Mt Eden, an upscale Auckland suburb, trying to pick out our friends’ house in the dark. A local rapped on their car window and screamed: “You robbed my house!” Then accused the astonished trio of casing the street for another rampage.

And that’s not even tapping into the stories we’ve inherited from our parents’ generation. God, we are a patient, polite people.

Every Māori will have multiple tales of personal racism. But I don’t think a lot of people understand what institutional racism is.

In 1988, Puao-te-Ata-tu, a landmark report about racism in New Zealand society, and particularly within the old Department of Social Welfare, noted that structural discrimination is “the most insidious and destructive form of racism.”

Many years ago, my old friend Rob Cooper explained institutional racism to me.

Imagine you and your extended family lived in a big house. One day, a group of strangers knocks on the door and asks if they can move in. You welcome them. But more and more keep coming. So you and the visitors sort out a tenancy agreement, just to be on the safe side.

As more of their mates pile in, your family is forced into the basement.

By now, the visitors are in the majority. They paint, plumb, rewire and transform the house without checking with you. You wave the agreement in their faces. After all, no matter how much a tenant pimps the property, the landlord is still the owner. But the newbies talk about how, thanks to them, the house is so much nicer. More modern even. “Look at all the bells and whistles,” they say. And they’ve got new rules, too. They suggest that if you want to challenge the alterations, “you could vote — just like anyone else in the house. That’s democracy. After all, we’re all one people. All equal.”

When we talk about institutional racism, we’re examining the inherent bias of structures and institutions on which our society is built. We’re looking at the values and belief systems that underpin state machinery — or, as Bob Marley sang in War, “the philosophy that holds one race superior and another inferior.”

Institutional racism is how power and control ultimately rests in the hands of the Pākehā majority, the true beneficiaries of the Treaty that enabled them to settle here in the first place. The structures their ancestors put into place entrench Pākehā privilege.

“That privilege that created, perpetuates, normalises and defends institutional racism is completely invisible to those who enforce it,” says my mate Barbara Menzies. “But us privileged types get real upset if the privilege we take for granted is challenged. Andrew Judd’s experience is a perfect example of that.”

The Treaty prescribed a very different relationship between tangata whenua and all others. And the kiwi v iwi nutcases among us can’t understand why Māori hang on to the Treaty for dear life.

I think there are many intelligent people who know there’s a bias in the system. They just don’t recognise it as institutional racism.

Take the case where four young Pākeha boys received a very light sentence despite a four-month burglary spree that netted around $80,000 worth of property, which they then flogged for cash or on Trade Me. Judge Harvey described them as four “bored young men … full of bravado who did it for fun, adrenaline and profit.”

A comment below a Herald article summed up most posts: “If these were Māori youth, they would be in the slammer.”

Nowhere in the comments was the phrase institutional racism used. But Moana Jackson identified it as such when he reviewed the criminal justice system in 1988, and unpacked it for us.

Moana described the interconnectedness and depth of the problems, which extended across police, politicians, the public service, judges, and juries. He suggested a number of solutions, which included the development of a separate Māori criminal justice system.

But a 2011 policy position paper, Just Speak, noted that, while there were “promising developments (for instance, new institutions such as the Public Defence Service and rangatahi courts) … structural change remains far off, and many of Moana Jackson’s proposals have not even been considered, let alone implemented.”

In April 2014, the United Nations declared that the New Zealand justice system “must be reviewed” after finding it was biased against Māori.

And that’s just a quick run through of one power structure in our society. How about the rest? It’s not like the research isn’t there. The kind of work Moana completed will have been done across many Crown agencies. It’s just that the Crown isn’t willing to consider, let alone make, substantial changes.

New Plymouth is 20 kilometres from Parihaka. Dick Scott was so moved by the shameful history visited upon that peaceful settlement that he wrote Ask That Mountain, a book that had a profound impact on me. Tim Finn, another Pākehā, sang about Te Whiti and Tohu. New Plymouth is host to WOMAD, the multicultural festival that celebrates music, culture and diversity. All of that was lost on the voters of New Plymouth. When Andrew called for an increase in Māori representation, he was shot down by ignorance and mean-spiritedness.

The fact that Māori get excited when Andrew Judd and Steve Chadwick (mayor of Rotorua) use their positions to challenge racism, symbolises how desperate and grateful our people are for champions. We’ve learned that most Pākehā really only listen to their own — and hardcore racists don’t listen to anyone.

So we have to appeal to those with a sense of justice and compassion.

Many Pākehā understand that their sons and daughters are less likely to be picked up by the cops, go to court, drop out of school, rob a bank, get sick, be unemployed, end up homeless and commit suicide. Those who understand why are agents of change in their circles of influence. Pākehā who don’t “get it” fail to understand that the dice is loaded in their favour — that their place in the game is a given. They make assumptions that lead to victim blaming. Their inability and unwillingness to understand is part of the problem.

In the 1980s, Māori stopped doing “decolonisation workshops” for Pākehā. It was decided that Pākehā needed to put energy into educating their own, because Māori were too busy trying to educate ourselves that we are more than the system expects us to be.

Three cheers for Andrew, and for Māori and Pākehā who speak out when the popular option is to remain silent. And for everyone who is doing transformative work in the background. While it’s tempting to revisit the old Ngā Tamatoa “Racist of the Year Awards” (and there would be plenty of nominees this year), it’s probably more productive to celebrate those who are working alongside Māori to make real change. It’s hard. It’s frustrating. But, at times, it’s exciting.

A Pākehā friend of mine recently went to his primary school’s 150th anniversary in Taranaki. “You couldn’t get a more archetypal colonial school,” he said. But he noticed a huge cultural change since his days, led by the current pupils. “It was mind blowing,” he said. “So, yes. We still have our fair share of rednecks, but I think there is also profound grassroots change.”

And he reminded me: “Dinosaurs meet a predictable fate.”

Comments on this article are now closed