The Crown isn’t just Pākehā. It is also Māori. 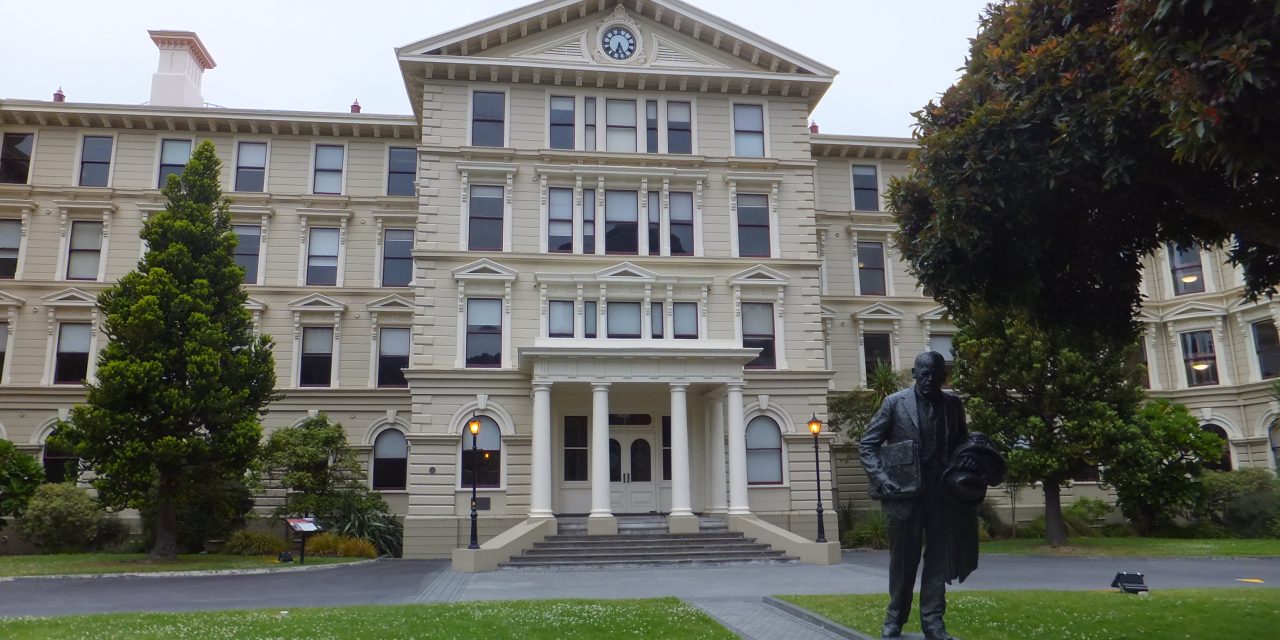 Symbols come in many forms, tangible and the intangible. They tell us stories we may not even be aware of.

Here’s one. I work in a beautiful building. It is a building that breathes and moves about me. Occasionally, as I walk down the halls or the stairway, I feel surrounded by a soft golden glow, created by the sensory fusion of kauri finishings, scroll-shaped corbels, the curved window bays, and sombre carpeting. Mostly, I just feel harried and inadequate, so I forget to marvel at this hand-wrought architectural icon.

“Icon” is the right word because these Old Government Buildings in Wellington operate as a transportive symbol. Walk through the doors and, whether or not you are aware of it, you are carried to an era of history that consolidated New Zealand as a colonial nation.

Built in 1876, the year provincial governments were abolished and a central government established, this place was the seat of administrative power. This building tells a simple surface story of a young nation finding its way, but the deeper and truer story is of Pākehā power and claim surmounting the messy, contested, and uncertain history of several peoples.

So I walk the victors’ halls. As a law lecturer, I now teach aspects of the legal system that upholds that deeper story, as those halls now comprise Victoria University’s law school.

You will see no koru, no tukutuku, no whakairo. There are Māori and Pasifika spaces tucked away, if you know where to look, fragile and lovely, retrofitted exceptions to this narrative of solidity and permanence.

Most of us who work and study in this place don’t pay attention to this one-sided battle of stories. And fair enough too. We have our lives to get on with and futures to imagine. It’s our building, we use it, we inhabit it for a brief time (or maybe for a long time) on our way to somewhere else.

In the pre-election maelstrom you might have missed a pretty insignificant story. I nearly did, bewitched as I was by Jacinda, Gareth & Marama et al (not always in that order).

It was a little item on the TV news (and in the Christchurch Press) in mid-September about people lining up to see inside the new $300 million justice and emergency services precinct, including the police watch-house and cells.

Thousands jumped at the chance, with the queue stretching down Lichfield St all morning and into the afternoon. […]

“It’s quite unreal really, definitely a different experience,” one said. “The kids love it which is great.”

They’ll just be hoping this is the only visit they’ll have to make to the police cells.

Somehow this event pierced my election-induced fog. I paused, wondering if I’d heard it correctly. I waited for the punchline, or the ironic comment. There was none.

This little, unimportant story symbolised something larger. Apparently, in my hometown, thousands of happy people queued for more than an hour to see the inside of a legal system which they accepted was theirs but was not designed to hold them.

To such people there is right, as well as rightness in the process and the outcome of law. Law is normal, formal, probably a bit absurd and creaky, but part of the natural order of things.

Five days later the almost exact opposite occurred, also at the symbolic level. In celebrating Māori Language Week, a police car decked out in te reo Māori decals made its debut in Papakura, Auckland. The response was, shall we say, mixed:

“Been to Ngā Whare Wātea today and the kids were all over it. It was fantastic, they had a great time,” says police officer Ivan Tarlton (Ngāpuhi).

However, not everyone is smiling.

Khylee Quince: “Waitangi Tribunal earlier this year, only five months ago, makes recommendations about the Crown breach of Treaty relationships and Treaty duties, particularly active protection in relation to Māori and the terrible disproportionate rates of Māori offending. This is the first we see from the Police in response to that, so particularly poorly thought out strategy in my view.”

Julia Whaipooti, of the youth-led rights organisation Just Speak, is one who expressed concern:” Putting a kupu Māori on a Police car doesn’t seem to form part of any strategy towards reducing the number of Māori we have entering and being processed in the system at disproportionate rates. It’s like having a pōhiri to come into prison. Putting a Māori name on a police car doesn’t do anything to address the issues.”

Similar feelings had been expressed months earlier when the Department of Corrections launched a new haka to find new recruits, in part as “a challenge for Māori to step up and accept the role of being a change agent working as a Corrections Officer”. Others saw such symbolic developments as ineffective bandaids to the vast problem of Māori hyper-incarceration.

The haka and the Māori design on the police car were symbolic of a powerful story just as powerful as that represented by my workplace: Māori could only be subject to the legal system, never owners of it.

Māori (most, not all) will never have unthinking ownership of Crown or government institutions. Most (not all) Pākehā New Zealanders, in comparison assume exactly such ownership.

There’s an example from my own work-life I have blogged about before of the daily and undramatic reality that underpins such symbolism. Every year I have a similar kind of student visit me, and we have a version of the following conversation:

“I’m having trouble with my lectures. I just don’t get it.”

“Okay. What are you finding so hard?”

“I don’t understand what the lecturer is saying. I write down everything she say. I read it, again and again, I highlight the words, and I write it out again and I still don’t get it.”

“Okay. Show me some of your notes. Right. Do you know what this is [pointing to ‘Cabinet Minister]’?”

“What about this [pointing to the word ‘statute’]?”

“Not sure about that either.”

“How about this [pointing to the word ‘Parliament’]?”

This student may have already struggled with the education system, but not necessarily. She may well be a B student in her other subjects, but the ideas behind words like “statute”, “Parliament” and “Cabinet Minister”, for the moment at least, defeat her. She has never, in her life, come across them before in a way that enabled her to understand them.

Perhaps she didn’t come from a family where politics or voting, or even the news, were discussed, where Western “law” was ever really thought of as something beyond “what the police do”.

This student is Māori, but her lack of exposure to the most basic ideas of Western “law” doesn’t stem just from ethnicity, because I’ve also had these conversations with Pākehā, although far more rarely.

She merely falls on the difficult side of social and educational history. Like many other Māori in tertiary study (including me and my brothers) she is the first of her family to study at uni, the first to study law.

She has no template to follow and, for whatever reason, school didn’t prepare her by introducing her to the ideas underpinning our institutional structures. Right now she has absolutely no confidence that this will ever be her world or her tool.

How can she? She can’t even describe it yet. Our general system, our law in all its manifestations is alien and abnormal. It’s an animal to study behind safety glass. A poisonous exotic.

Strangely enough for those who do have that sense of ownership of our general legal system, Māori law has become the alien. The museum exhibit. The quaint but useless curiosity.

And yet there are signs that this kind of rigid dualism in thinking is outliving its usefulness.

There is a sentence in the reo section of the Wai 262 Flora and Fauna report that hit me one day in 2010, and I’ve repeated it many times to myself ever since.

Fundamentally, there is a need for a mindset shift away from the pervasive assumption that the Crown is Pākehā, English-speaking, and distinct from Māori rather than representative of them. Increasingly, in the twenty-first century, the Crown is also Māori. If the nation is to move forward, this reality must be grasped.

The Crown is also Māori.

This extraordinary statement is at once surely true and surely incapable of being true. When exactly does reality collapse into one possibility or the other, I wonder?

Acceptance of the notion that the Crown is also Māori requires reaching beyond the idea of simply negotiating better Māori space. Or better concessions for Māori. Or a Māori seat at the table.

Such a notion requires the development of an unthinking assumption that the table is Māori to start with; that the Old Government Buildings are to be understood to be as much a Māori, as a Pākehā construct.

A few weeks ago I was one of the moot court judges for the internal Māori moot at Te Herenga Waka marae. It was a competition where Māori students put arguments before judges in a mock court setting.

Of the six mooters, four of the students mooted in Māori. Each of them was able to move fluidly between an unconscious ownership of the legal system and of tikanga Māori, and a blistering critique of the same systems. Just one small symbolic and up-ending moment of something better. There are other such moments waiting to coalesce.

In truth I doubt the Old Government Buildings can ever really be understood to be as much a Māori space as a Pākehā construct, even if we did add whakairo and other symbols of Māori ownership to it.

I’m looking for the day when more Māori can walk through the doors with their culture intact, and are indeed transported: not to an era of colonial power made manifest in which they are an exception to an unwritten rule, but simply to a place they own. Unthinkingly.