Sacrifices but no reward 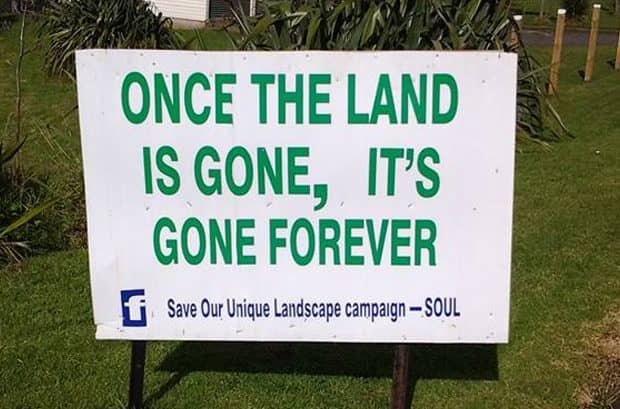 A whānau dinner earlier this year was a life-changing experience for six Māngere cousins.

That came about when Qiane Matata-Sipu invited five of her cousins to her home at Ihumātao village not far from the Māngere airport in Auckland.

They had all grown up in the papakāinga where around 80 families trace their descent to Te Waiohua and Te Ahiwaru of Tainui waka.

And they got talking about a huge housing development next door. The six of them. Pania Newton, Bobbi-Jo Pihema, Waimarie McFarland, Moana Waa, Haki Wilson, and Qiane.

There had been a long and ugly history of their whānau’s land being taken from them — and now, with this housing plan, here was a serious threat to important historical sites of their people. So, by the end of dinner, they decided to take on the government, the developers and the Auckland Council.

They settled on SOUL as the name for their protest group. It stands for Save Our Unique Landscape and their aim was to stop nearly 500 homes being built near their village, their ancient burial caves, the historic Ōtuataua Stonefields and their ancestral maunga, Te Puketāpapatanga-a-Hape and Ōtuataua.

Back in 2001, the threat didn’t seem at all serious because there was Nick Smith, as the Minister of Conservation, opening the Ōtuataua Reserve as a heritage site and describing it as having international, national and regional significance.

But his priorities changed when he became the housing minister and he signed off on a 32-hectare, high-density housing development on Ōtuataua’s border. That was one step in the government’s plan to deal with Auckland’s housing crisis.

The plan wasn’t a direct threat to the village, but Qiane says the problem is that “our entire being is Ihumātao, not just the papakāinga, but the whenua all around us.” And Moana Waa sees a need to protect a thousand years of cultural history for her daughter.

“If these houses go ahead,” Moana says, “she’s going to have nothing. Our identity is highly likely to be lost. That’s what this fight is about for me.”

The cousins are well-educated, employed, and most of them have young children. But they were newbies when it came to battling the system and figuring out the consequences of the laws regarding SHA (Special Housing Areas).

Haki Jackson says initially they weren’t too worried and the cousins were saying: “Cool as. We can do this!” But then it became “heavy.” And he says it’s scary now as they recognise how much firepower their opponents have — and that the media is circling as well.

Being the only male means Haki gets picked on and ordered around. But he’s proud of his whānau.

“They’re pretty much the backbone of our campaign and they pick one another up and just help each other go forward.”

The campaign has meant an extensive education for them about council by-laws, government policy and environmental law. And others in their whānau, hapū and iwi are learning from them — and developing the confidence to stand up and speak up.

Qiane already has that confidence. She reckons there are 30,000 empty houses in the city and isn’t impressed by the government flogging off state homes. It’s misleading, she says, to talk about a housing shortage “when the issue is really about affordability.”

SOUL, she says, isn’t against housing developments. In fact, they’ve offered an alternative site to the council. They’ve said to the council: “Look, let’s not build here. Let’s actually look at more viable options that are closer to amenities and have infrastructure, where you can actually use the SHA law to its full capacity.”

No joy there, though. That idea has been dismissed by the council — which is one of a number of painful lessons the cousins have had to deal with.

Their whānau went to the Environment Court in 2012 to try and future-proof the whenua surrounding the Ihumātao papakāinga. The court decided that restricting development was impractical and re-zoned Ihumātao from a public open space to a future urban zone which has allowed development to go ahead.

The only comfort the cousins gained from the ruling was that “sympathetic development” could be undertaken “to protect specific heritage, cultural, and historic values” and “reflect the fact that this is a living landscape.”

But what this reflects is another low point in a timeline of loss.

The Ihumātao people generously gifted prime coastal land to missionaries when they arrived in New Zealand. In 1836, Reverend William Fairburn, however, claimed he bought this and other land, a total of 83,000 acres stretching from Ōtahuhu to Papakura.

Then government policies allowed more land to be acquired and sold off to British settlers. And, at the end of the Land Wars, a further 450 hectares were confiscated.

Ihumātao faced more pressure as Auckland city grew. In the 1900s, their ancestral maunga, Maungataketake, Puketutu (Te Motu a Hiaroa), Ōtuataua, and Puketāpapa were quarried to build the Auckland airport and the city’s roads.

Then there are Ihumātao’s waterways. They have never recovered from decades of pollution. In 1956, 25 million litres of industrial waste and nearly 700,000 litres of untreated wastewater were being pumped into the Manukau Harbour every day through the Māngere Inlet.

That allowed the council to think it wouldn’t matter much if they built the Māngere sewage ponds over the tribe’s fishing grounds, which had already been ruined by pollution.

Ōruarangi Creek, where the people fished and collected kaimoana, was reduced to a trickle because of the sewerage works. Flow was restored in 2005. But, in 2013, the villagers’ efforts to regenerate the creek were cancelled out by an accidental spill of a thousand litres of purple dye which killed off all the aquatic life.

When the Auckland Airport second runway was built, bulldozers ploughed through one of the tribe’s urupā in 2008 and unearthed 89 graves. Some of the remains, estimated to be at least 600 years old, were kept in a storage container at the airport while the authorities, not the tribe, figured out what should be done with them. They were eventually re-interred. That was two years later.

Given this history, the patience and strength of Ihumātao’s people has been remarkable.

So has the support for their stand. SOUL now has a core group of around 30 people who meet every week with the cousins. Some are local Māngere residents who successfully opposed the east-west arterial road through Māngere that would have removed hundreds of houses. Some aren’t even from South Auckland but are recreational users of the Ōtuataua Stonefields.

Qiane says those supporters contact MPs, advocate out in the community, hold stands at the local market, and tell people about what’s been going on.

One of them paid for three buses to transport 100 supporters to the Auckland Council offices in August when SOUL presented a petition signed by 4000 opponents of the SHA.

They’re also willing to take things further, according to Qiane. “They want to stand and fight and occupy!” she says.

Meanwhile, SOUL’s lawyer Cameron Hockly of Bennion Law, who is working free of charge, is preparing an application for a Waitangi Tribunal urgent hearing. They’re also asking the Ombudsman to review the legality of the process that allowed Fletcher Residential to win the tender.

But, despite this support, the cousins have also learned not everyone is on their side.

Following the Environment Court defeat, Te Warena Taua, the chair of the Makaurau Marae Charitable Trust at Ihumātao, changed tack and started negotiating other solutions with Auckland Council and Fletcher Residential. He convinced them to cut the development from 520 homes to 480 and allow more local input.

Len Brown, the Auckland mayor, is singing a similar tune. He’s talking to Fletcher Residential about doing up some of the homes in the village. And, although houses in the new development will be selling for around $700,000–$800,000, Len expects 75 homes could be set aside for villagers at less than the market price. Perhaps at $500,000 or less.

“The people of Ihumātao want homes,” he says. “Whānau could come together, gain some equity and own their homes.”

Qiane just rolls her eyes when she hears that. She says: “$500,000 is not affordable for us, especially at the expense of our mana. This is just modern-day colonisation.

“We’ve sacrificed so much for the greater good of Tāmaki. When is it our turn?”