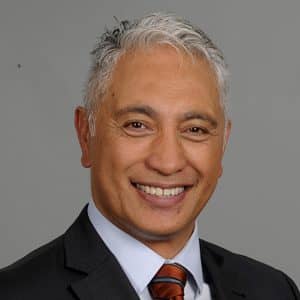 Alfred Ngaro did a lot of apologising after his “naïve, poorly worded” comments at the National Party conference in Auckland last weekend.

The former electrician and pastor is one of only two Pacific MPs in the National Party — the other, Sam Lotu-Iiga is leaving politics at the next election.

Alfred is the Minister for Pacific Peoples, as well as the Community and Voluntary Sector, and Associate Minister for Children, and for Social Housing.

Many years ago when Alfred Ngaro was post-sparkie and still a pastor, he opened a Pacific health conference at the Waipuna Hotel in Auckland.

As the former Pacific Issues correspondent for Radio New Zealand, I was seated next to the newly elected MP for Maungakiekie, Peseta Sam Lotu-Iiga, who had run a pitch-perfect campaign under the wing of National Party stalwart Mark Thomas. Peseta smashed the Labour candidate Carol Beaumont in the polls and seemed destined for far greater things.

He was also scouting for hot Pacific talent for National — a task done in the past by Judith Collins — and praised the smooth-talking pastor who some have described as parliament’s George Clooney.

“We need him in the party and in parliament,” said Peseta.

And so it came to pass. But not until Pastor Ngaro had touted himself as the Citizens and Ratepayers 2010 candidate to represent the Maungakiekie Tamaki Ward on the Auckland Council.

He cited his experience in governance — from school boards to the Auckland DHB, select committees to advisory boards — and, of course, he hawked that Sir Peter Blake Emerging Leader award for community work.

But, for all that, his smooth-operator style campaign steered by Mark Thomas failed to snare enough votes, and he lost.

The night the results were revealed at a sports club on the Panmure side of the Tamaki Estuary, he said “the sandpit of local government” was not for him and he would aim higher to where the “big people” play.

His target became the hot mess of national politics.

Alfred Ngaro was perfect for National, and it just so happened he wanted a political role outside of the local government sandpit.

In his first term as a list MP he was a marvellous asset for National: a compliant party servant with a clear elevation strategy and part of a Pacific double act alongside Peseta. He was willing and more than able to span many groups and spaces with grace and cultural intelligence.

His performance garnered deserved-at-the-time praise from his “Pacific people”, many of whom were proud of his achievements —  and acceptance from those whose experience of the browning of New Zealand is mostly confined to festivals, famine, rugby teams, the Dawn Raids, and whatever goes on in South Auckland.

Ngaro knew that he had to prove to National’s hierarchy that he had the goods and said he’d do whatever it took to win approval and justify his employment. He was slick and sincere.

That determination and an adherence to hard yards meant he traversed the country going to all manner of meetings — from tours of Fonterra factories to family funeral services across Pacific Auckland. He was visible, hard-working, debonair, and a man on the rise.

One year at the Anzac service that recognised the families of the Niuean men who were part of the Māori Contingent in World War I, he spoke with elegance and poise. His sincerity settled deep within those at the commemoration organised by the Mutalau Ululauta Matahefonua Trust at East Tamaki Primary. Here was a National Party man who was a kind Pacific brother. At least that was his appearance and his belief.

He was always about hard work — and, as a pastor, had tried hard to instigate change in areas such as the cost of expensive funerals and the burdens they put on families.

But then something happened.

It’s hard to say when precisely but there came a time when affable and capable Ngaro started to believe his own publicity.

The charm seemed ill-placed, possibly thin, and the ambition a little vulgar.

But ambition is a hallmark of politicians of any ethnicity. They operate in a tough arena where nasty and nice, by necessity, run alongside each other like sweet and sour in a Chinese takeaway. One wrong move too many and, as many have discovered, they are like paper cups at the mardi gras: discarded after use.

Ngaro’s good-guy patter and persona was dashed by his Trump-like statements about the social sector delivered from the pulpit at his party’s recent conference. They burst like an alien from his mouth as he played to an audience wanting a dose of menace served up in a nice package by someone else, so they could nod and approve but not have to say it.

He reportedly said Labour list candidate Willie Jackson could expect to lose government support for his Manukau Urban Māori Authority interest in a second charter school, and its Whānau Ora contract, should he criticise National.

Then he uttered: “We are not happy about people taking with one hand and throwing with the other.”

Well, throw me out of the temple.

Surely the former pastor was across the scriptures and the gospels of Matthew and Luke which suggest turning the cheek and giving a man a shirt or coat is preferred to revenge and anger.

Alfred Ngaro has soured his brand.

On one level, it’s a beltway issue and perfect for outraged conversation among the chattering classes.

On another, it’s a dismal mistake by a Pacific politician who should have known better than to attempt to pass it off as a rookie slip-up.

Ngaro is no rookie. He’s a skilled operator who got too big for his boots and decided he would come out swinging.

What on earth did he learn all those years ago on the Sir Peter Blake emerging leaders’ course?

Of course, Alfred Ngaro can come back from this — and he needs to, so there’s a strong Pacific lens that can speak to the National Party.

He might like to consider how he speaks out to his cabinet colleagues when they next propose a policy that fails to support the country’s most vulnerable.

And, as a former man of the cloth, perhaps he will turn to his God and his Bible for a little help on how to behave.