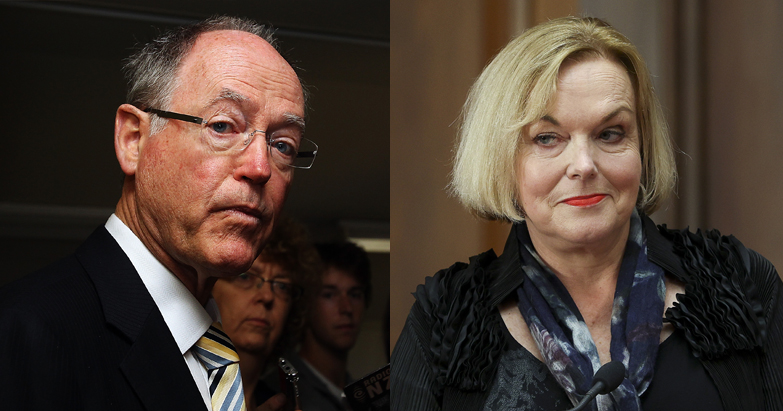 Don Brash and Judith Collins. "Whenever a politician plays the race card, I get scared we're going back to that time." — Winston McCarthy.

In January 2004, Don Brash, the then leader of the National Party, delivered a speech to the Ōrewa Rotary Club that revived his party’s popularity in the polls, panicked Helen Clark’s Labour government into backing off “closing the gaps” policies, and divided the nation. For Winston McCarthy, who’d just started law school in Auckland, it was a particularly ugly time.

I started university in 2004. I was 17 years old. My mum and dad hadn’t been to university, and Dad would incessantly parrot: “Be a scholar, don’t be like your dad” — before heading off to his next job.

Like the dutiful son I was, and seeing the sacrifices my parents were making, I internalised this advice and applied myself as best I could. I eventually became one of those bizarre children who looked forward to tests and always had his nose in a book. I was a nerd more or less.

Going to university represented the fulfilment of my dream. It was meant to be the “something better” my parents gave up their “something good” for. But it turned rather quickly.

I had expected some type of adjustment period, but I couldn’t have anticipated the bigoted torrent that had been unleashed on campus by Don Brash’s Ōrewa speech.

I had experienced racism before, but it was the low-key variety. Being followed around shops. The occasional slur. As far as racism goes, it was fairly polite.

But my experience in 2004, on the Auckland University campus and within law school, was different. It was visceral and confrontational. Strangers telling me I didn’t deserve to be in “their” class. Lecturers joining in on the fun. The student magazine running letters that could have been mistaken for white supremacist manifestos.

Unlike previous years, the incidents weren’t irregular. It was constant and relentless. I like to think I’m fairly resilient, and I had people in my corner, like the fiery Nin Tomas, but it hurt. It really, really hurt.

And I hate myself for it today, but I started to believe the abuse. I dreaded going to class. It affected my self-belief. It took away my love of learning.

While the climate was tame compared to what others have gone through, for me, there hasn’t been an uglier year before or since.

I’m still working through this stuff. When I run into Pākehā lawyers around my age, I conflate them with the arseholes I met in my youth. And whenever a politician plays the race card, I get scared we’re going to go back to that time. It was in this context that I read Judith Collins’ comments last weekend.

There are intellectual criticisms you can make in response to Judith Collins’ rhetoric.

I could point out that we already have “two systems by stealth” that marginalise Māori.

I can highlight scholarship by Ned Fletcher and the Wai 1040 Waitangi Tribunal report which debunks the myth of “he iwi tahi tātou” from a constitutional perspective.

I could put flesh and bones on her strawman characterisation of He Puapua, the report which put forward the case for a Māori Health Authority, among other things.

But her position isn’t rational or reasonable. It’s the act of a desperate leader who can hear the clock ticking faster and faster.

As an aside, I really feel sorry for the authors of He Puapua. They have spent so much time and energy on earning stellar academic credentials and becoming experts in their fields — and they have carefully crafted a constructive, well-reasoned report.

All this, to have someone with as much expertise as my one-year-old daughter, yell “one law for all” into the void and see the tone of the discourse tumble.

I note with equal parts sadness and irony that, more than 10 years ago, one of the authors felt the need to write an article: Do Māori Rights Racially Discriminate Against Non-Māori? Unfortunately, the message — that they do not — still doesn’t seem to be getting through.

Unlike 2004, when Labour undertook an audit of race-based programmes and passed the foreshore and seabed legislation, the current Labour government remains committed to seeing through the proposed independent Māori Health Authority.

And it’s influential racism. The type that trickles down, normalises bigotry, emboldens bigots, and prevents much needed reform to address deeply entrenched inequities.

It’s hard to believe it’s been almost 20 years since Ōrewa, but they say that the past is a foreign country.

Let’s hope it remains so.

Winston McCarthy (Ngātiwai, Ngāti Hāmoa) is a lawyer specialising in Māori legal issues. He grew up in Whangaruru and moved to Auckland for school. He now lives in Hastings with his wife Alice and their young children.

Winston and his siblings have written about their mother’s experience with the health system, here.