Not all cults are bad 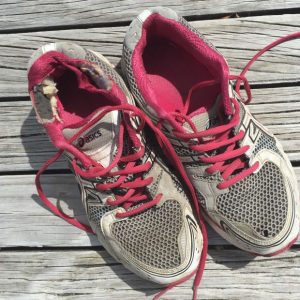 When it comes to exercise, my natural inclination is to skip the sweaty stuff and head straight to the resting position. And basically wallow. But over the last three years, I’ve been slowly resetting my headspace.

“IronMaori,” says the founder and chief organizer, Heather Ahu Skipworth, “is a journey that takes you to places you didn’t think you could go.”

True that. But I would add that the IronMaori finishing line really becomes the starting line for many of us, including Heather. She was a postie and a meter reader in a former life.

“I thought there must be more to life than delivering people’s bills. I became a lifestyle coach, did my first Ironman in 2009 and felt such a sense of achievement, I wanted to share that with others.”

So began the only indigenous Half Ironman event in the world where teams and individuals compete in the 2km swim, 90km cycle and 21.1km run. It’s now morphed into seven official Iron Maori events. You don’t have to be sporty (or even Maori) to participate, which is probably why IronMaori attracts around 8,000 participants each year.

My brother, Maru, was the first convert in our whanau. He told the rest of us about it over a feed of fried bread at the marae. Talk about dedicated. One year out from the race and we were already carbo-loading.

So began our conversion to the Cult of IronMaori.

Maru mentioned the most competitive part of IronMaori is to actually nail a spot. Last year, the IronMaori online registration site crashed because of overload. Back in 2012, it took only six minutes to fill up the spots. 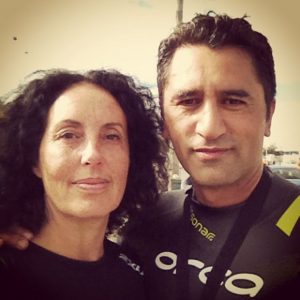 My husband, Toby (Ngaiterangi, Ngati Raukawa), is naturally sporty. He signed up as an individual. Team Te Arawa Tri-Hards included Scotty Morrison (swim), Cliff Curtis (cycle) and me on the run. Cliffy pulled out with some lame excuse about filming in Prague with Ashley Judd. Enter the real “dark horse” George Bradfield (Ngati Ranginui) with two Coast to Coasts and four Lake Taupo Cycles under his belt. It’s enough to put someone like me off. But that’s the thing about IronMaori. The whakatauaki is “completing, not competing.”

In the first week of December each year, all roads to Napier are chocker with cars sporting cycle racks and driven by Maori clutching at water bottles. This year 800 individuals have registered to compete in all three IronMaori disciplines. Another 1,800 will have signed up to race in teams. All will gather by Pandora Pond in the early hours of the morning of December 5 for the opening wero, mihi and karakia.

With a strong sense of camaraderie, shared values and that trademark hard-case Maori humour, IronMaori is like a giant party where the dress code is lycra – and where competitors stop to check up on those who have crashed off their bike.

An extra touch is provided by a small band on the side of the road, led by Ngahiwi Tomoana, to motivate the cyclists. One commentator introduced an incoming runner over the PA system as “single and looking for a wife.”

As Heather (Ngati Kahungunu, Kai Tahu, Te Arawa) says, to complete the event, you have to make some significant lifestyle changes and choices. And, for Maori who have been seemingly resistant to public health messages, it appears to be working.

Heather’s husband, Wayne Skipworth (Ngati Porou, Ngapuhi, Ngati Raukawa), has been public about his past. “I was a druggie, smoking dope every day for over 30 years.” Wayne confessed to having a smoke the night before his first-ever Ironman event, where he was a ring-in swimmer.

He fell in love with the sport and now credits IronMaori for saving him. He has chucked in his job at the freezing works and is doing what he loves. He and his son, Tane, design and produce the IronMaori fashion line.

There are also plenty of success stories about morbidly obese individuals who have morphed into healthier versions of themselves due to the whanau support offered in the lead-up to the actual day, and beyond. You only have to attend the prize giving to get a positive fix.

“The most inspirational moment for me,” says Heather, “was when we called all the over-60 year olds down to the stage at our Half Ironman prize-giving. Over 100 came down.”

Participants come in all different shapes and sizes. And that’s what appeals to Mike Hall (Ngati Raukawa, Aitutaki). A league player, coach and manager, Mike admits he’s lazy at heart. We kept passing each other during the IronMaori 2013. Didn’t know each other from a bar of soap, but there’s something oddly comforting about struggling along side by side.

“I gave up smoking three years ago,” he says. “That was around about the time my wife Margo entered her first IronMaori. I went along to support her and saw people smiling and just having a good time, not all serious like those hard-out tri’s you see on TV. So it got me thinking about doing it as part of a team. What I like is there is no pressure. The fitter ones give you a pat on the back or thumbs up as they pass. Everyone’s a winner. I treasure my IronMaori medal and it hangs in the lounge…next to my wife’s 30-odd medals!”

There’s no doubt, though, that competing in the event can be costly. Teams pay $126 per person for registration, on top of petrol, accommodation and meals away from home. Cyclists can shell out big money on bikes, shoes, helmets, clothing and so on, while swimmers will pay between $400-800 for an Orca wetsuit. It’s not cheap for runners either once they pay for shoes, breathable tops, state-of-the-art socks and a decent sports bra. Everyone needs a flash watch, stylee shades and a cool waterbottle.

Then there’s the time factor. When couples are both in training, it’s a mission to run a household, work, spend time with kids and have a life.

Elena Curtis (Te Arawa) says she and her husband, Wiremu, are an example of a couple with quite different approaches. She reckons he’s a “self-declared sports-mad, ex-Army, physical freak with a take-on-anything attitude.” But that’s not her style.

“I needed to train in a supportive environment with like-minded peeps, whereas Wiremu just needed time to do it on his own. So we had to negotiate training space, time and childcare to meet both our needs. My mother, Mary, took on a lot of childcare. During the week we gave each other days to use the mornings from 5.30-7.00am for training.”

Triathlons and Ironman events have long been considered an elite sport, a Pakeha domain. At the Half IronMaori, five percent of the participants are elite athletes or sports stars. Not that they necessarily find it easy. Ruben Wiki, one of our rugby league legends, has done his fair share and admits that IronMaori took him out of his comfort zone.

Away back in the 90s, my mate Donna Gardiner and I were part of two teams from the MUMA gym that entered a mini-triathlon in Devonport. It was a baby event compared to the Half Ironman. We were followed by a film-crew because Maori participation in triathlons was such a rarity.

In 2009, Heather recalls, there were only five Maori in the NZ Ironman. This year there were 65. Four of them started at the IronMaori Gold Coast event in 2013. And they weren’t brimming with confidence. In fact, two of them said they thought they were going to drown at the time.

A worried Cliff Curtis, who finally joined our team last year, felt the same way. As he emerged from the pond with a time of 40 minutes, he was beaming. He looked like he’d won an Oscar.

Elena says the biggest challenge is “your own headspace.”

“I couldn’t swim, I couldn’t ride a bike – especially with those clippie things – and I seriously hated running. BUT – if you can change the I can’t to I can try or I can learn, then the challenge of taking on IronMaori seriously becomes an awesome experience. You just need to begin with small steps. Give yourself time to develop. It’s amazing how many people out there will support and help you … just because.”

I didn’t think I would ever be able to run one kilometre, let alone 21. “Short, Fat Chick” author Kerre Woodham suggested that ego alone would probably carry me 5km. Yeah, nah. I took on a running coach to avoid injury and get a plan. I’m slow, but if I didn’t have IronMaori as an end-of-the-year-goal, I’d be pretty much stationary.

As with all exercise, the gains aren’t just physical. For instance, there’s Elena Curtis aiming to complete her doctorate this year – and she’s finding the IronMaori training “weirdly balancing.” She says it’s allowed her to focus on her writing and “keep on target.”

Heather Skipworth is plotting two new IronMaori events, and she dreams of sharing the IronMaori model with other indigenous people. Elena and Wiremu are back into training. I’m going to splash out on a new pair of shoes cos my trusty old ones have had to survive three years and a munching from my mate’s kuri.

A cousin, Gerard Te Heuheu (Ngati Tuwharetoa), one of the fried bread brigade early in this story, will replace Cliff in our team because Cliff has signed up various siblings for the quarter and half. Mike Hall and I motivate each other by email while his wife, Margo, is training for the Rotorua Marathon. Meanwhile, I’ve talked three mates from Muriwai into fielding a team at IronMaori for the first time.

Because that’s what you do in a cult. You convert others.