Moana Maniapoto: We need doctors to be on top of their game 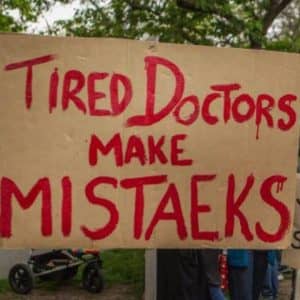 Doesn’t life pack a wallop sometimes? One minute our family was laughing, singing and dancing, celebrating my “abduction” by the New Zealand Music Hall of Fame. A week later, we were wondering how it could be that the world continued to spin while ours was crumbling.

Some professions, I believe, are more like a calling. One is medicine. What a gift it must be to heal, to welcome new life, to save lives. What a responsibility, a burden. To get it wrong can be fatal.

Last week, my 17-year-old niece was diagnosed with flu by her local GP and told it would take about a week to get over. During the following days, her health deteriorated so much, she was losing balance, couldn’t form words, recognise familiar faces in photographs, or even remember her dad’s name. And all the time, she complained of a thundering headache that made her head “feel slow”.

Finally, doctors did a scan. It revealed swelling on the brain. This was serious, deadly serious.

Our whānau felt like we’d been collectively king-hit. We weren’t living, just existing in a state of disbelief — observing others carry on with their lives while ours moved in slow motion. Waiting. Waiting on tests. MRIs. Lumbar puncture. Neurosurgeons. Waiting on someone to translate what was happening. Desperate for anyone to step up and just say: “We can fix this.”

So I’m writing this from the Māori Health Unit in Hastings where some of our whānau have been camped for a week. At 8 o’clock every morning, we wake to the sound of staff singing Wairua Tapu, with their beautiful heartfelt harmonies. Across the way, at Te Hōhipera o te Matau o Māui, the wards are bustling with nurses, orderlies and doctors. Everyone is kind and helpful and funny, from those manning the lively nurses’ station to the cheeky orderly who delivers meals and sneaks an extra banana to our niece.

The nursing staff recognise me. One recalls my nine-month stint as a doctor on Shortland Street, acting opposite my Te Arawa relation Temuera Morrison.

“When I started my nursing training,” she laughs, “I thought, gee, this is nothing like Shortland Street.” There’s an understatement. As a pretend doctor, I had more love scenes than patients.

This week, around 3000 junior doctors (also known as residents) were on a 48-hour strike. The term junior doctor covers anyone still in training — from those who have just graduated from medical school and are one month on the wards, to those who have 10 years under their belt but are not yet qualified as a GP or specialist.

The junior doctors’ union is the Resident Doctors’ Association (RDA). They’ve been in negotiation with an entity called DHB Shared Services (DHBSS), which represents the 20 District Health Boards. The entity has the capacity (but apparently not the will), to embed a set of new conditions into the multi-agreement that’s been on the table for four years. Talks had broken down.

The key issue for junior doctors is safety, says Ash Ellis (Ngāti Rangitihi and Ngāti Awa), a union delegate and GP-in-training. “We did a survey this year. Over a thousand of our members said they are so fatigued by the current hours and shifts, they’re making mistakes. Nearly 300 said they’d fallen asleep while driving.”

The union wants the maximum number of days worked in a row to be cut from 12 to 10, and the number of consecutive night shifts dropped from seven to four. Some juniors can be rostered for up to three 16-hour shifts within their 12-day run.

“It’s about us resting and recuperating so we’re sharp when we return to work,” says Ash.

Do the numbers and it’s easy to lose confidence in the ability of doctors to exercise razor-sharp thinking. And let’s face it. Doctors aren’t wimpy fly-by-nighters. Just look at the life cycle of a doctor. These people play a very long game.

Take Lincoln Baltus (Ngāti Whātua), who will graduate from the University of Auckland School of Medicine in a month. It’s taken him six years and around $70k to get his degree. As a medical student, Lincoln has already spent three years of practical training in hospitals in New Zealand and overseas.

Lincoln’s dream is to specialise in orthopaedics, especially after seeing a top orthopaedic surgeon in action at a San Francisco hospital. Meanwhile he’s building up experience at Whangarei Hospital. Once he graduates, Lincoln will become a junior doctor for two to three years, moving through the wards under a senior doctor. Then it will take him an additional eight years to qualify as a specialist.

Add it up. That’s around 17 years between his first days at university until the moment Lincoln gets his ticket as an orthopaedic surgeon. That’s what makes medicine a calling. “I don’t know anyone who’s gone into medicine for the money,” says Lincoln.

Dr Deborah Powell, national secretary of the RDA, says doctors have a “unique” salary arrangement. Say a group of doctors work over a four to six week period at a particular hospital. All their individual hours are recorded. One doctor might work 50 hours, while another might work 80. Those hours are bunched together, then divided by the number of doctors, to come up with an average of hours worked.

Let’s say the average for the group is 59 hours. That figure then gets put into the appropriate five-hour salary band: that is, the 55–59.9 hours band.

Everyone within that band, regardless of their individual hours worked, is paid the same salary, with variation depending on years of service. Sometimes the cohort will move between bands depending on the average. Some doctors working way more hours will pick up less than they would if they were paid on a straight hourly rate, but other times, it’s vice versa.

“We did offer the employers to go to an hourly-based payment system,” says Deborah, “but they didn’t like that, so we remain with this averaging system.”

Because, while the dispute over rosters is on, the DHBs are trying to fiddle with salary structures that had already been agreed on. You see, juniors or residents don’t get extra for night shifts or weekends or overtime. Their salary (made up of “average hours”) is based on a flat hourly rate that includes components for overtime and penal time.

“The DHBs have tried to claw back that penal component of our salary,” says Deborah. “These compensate workers for working unsocial hours such as weekends. We will still be working all the weekends, so we have refused to give up our penal compensation.”

A couple of years ago, the DHB Shared Services (DHBSS) said they were open to a cut in hours — they just couldn’t get their heads around how to deal with it. The union helpfully developed a template. It produced mock rosters, costed the changes, and presented them to the DHBSS. The DHBSS rejected it but refused to come up with any other option.

They say the union needs to negotiate separately with every department in every hospital to adjust every roster.

The problem with that, says Ash, is not just the logistical nightmare but the fact DHBs wouldn’t be contractually bound to stick by the new process. While a couple of DHBs (like Tairawhiti and Northland) have already made changes (and they look like a win-win for all), the sensible move would be for the DHBSS to factor the adjusted conditions into that national multi-agreement. It would save time, energy, money and uncertainty.

It’s hard enough to make good decisions, even when you’re firing on all cylinders.

The GP who first saw my niece stuck to his diagnosis even after my sister took her back a second time. Not satisfied, they went to the local A&E where my niece was diagnosed with another benign condition and sent home. They returned to the A&E the following morning. It was only on that fourth visit that doctors finally figured out what was wrong. If our sister had let it go, it’s unlikely our niece would still be alive.

So a lot can happen in a week. Bad and good.

Day by day, our niece is improving, surrounded by wonderful medical staff, specialists and therapists. She is regularly visited by Māori advocates from the health unit. Our whānau are tag-teaming each other to support our sister. It will take time, but we are feeling more positive each day.

The thing is, everyone can make a mistake. We don’t know if the misdiagnosis was due to fatigue or bad decision-making or because her condition is rare, particularly in someone so young.

What we do know is it’s a team effort.

Parents need to trust in their gut instinct, to have faith that they know their child better than any professional, and to keep pushing and asking and demanding a second and fourth opinion if need be.

At the same time, we need to recognise that the number of hours being worked by junior doctors is an OSH issue. The PM says junior lawyers and bankers work long hours, too — that once you graduate “it’s not unusual to work really, really hard.”

Yeah, but most of the time it’s only the health of that banker or lawyer that’s at risk. Doctors are often involved in life and death situations. We need them to be at the top of their game, so they can work with us to make the best decisions for our whānau.