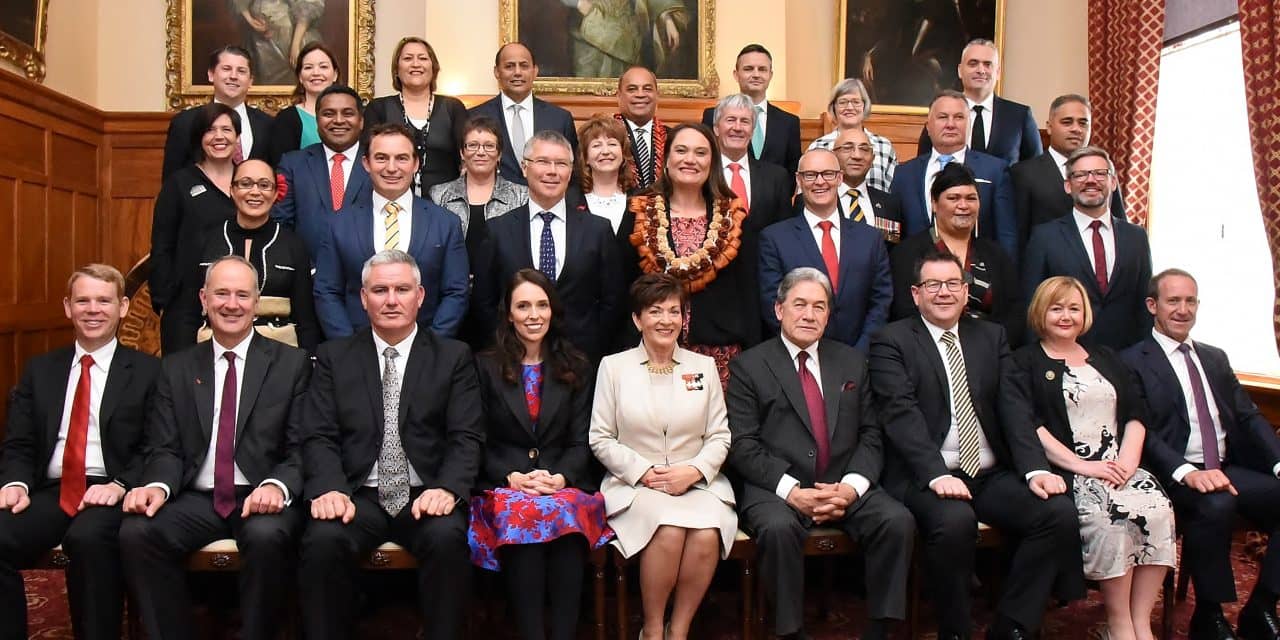 Birds are singing, the grass is greener — and after Winston Peters’ announcement, there’s suddenly more colour and bounce in the world. It’s amazing how happiness makes everyone look more youthful, more beautiful. Call us naive. Call us idealistic. Call us while we’re still in a good mood.

I’m so happy to be happy, I almost feel sorry for the other lot. It’s stink being depressed and, let’s face it, cynicism is about as sexy as socks in crocs. But, then I think …

Suck it up, babies. It’s our turn. And I can happily report that people in my world are feeling absolutely, positively perky.

On Wednesday I was in Wellington, in and out of various meetings plotting Māori music and art strategies. It’s my thing. The kind of stuff some of us have been doing for the last nine years. During that time, the Māori unit had been gutted from Creative NZ, the Māori Made Mark kicked to the kerb, and our Māori Music Industry Coalition has struggled to get traction.

Someone announced at one of those hui that we now had not one, but three ministers of the arts, including the Prime Minister and the money man, Grant Robertson. Wow. They’re actually serious about arts and creativity.

That night, I ended up sharing a celebratory drink with the other associate arts minister, Carmel Sepuloni, at the vibrant Pacific Arts Awards. The arty fraternity were smiling from ear to ear.

I wondered how everyone else was feeling.

What’s the vibe in the education sector, I ask my youngest sister, Lisa, principal at Whangara School on the East Coast? Ecstatic, says she. My brother Maru who teaches maths in Māori at Te Kura o Koutu? Excited, he replied, because national standards will be getting the boot.

My sister Niki who is in Raglan at Xtreme Zero Waste says they all feel great. My environmental mates and ocean warriors, Kylee and Chino, do too.

How about Māori health workers, I ask Megan Tunks. Positive. Loving the emphasis on preventative measures, interventions and improving unhealthy environments. She reckons building on the Māori Party’s Whānau Ora programme and putting a Māori lens on everything — well, Māori health workers would be good to go.

Hopeful, says my friend the retired diplomat. Get the right people, and Māori involved at the outset, and there are plenty of opportunities, thanks to Winston Peters identifying the Russian superpower as a potential trading partner.

Excited, says my son. His generation aren’t threatened by MMP and see the mix of three leaders (each with their own style, experience and passion) as complementary.

Pleased, say the reo gurus who have been involved in a review of the Māori revitalisation strategy this year through Te Māngai Paho. So many MPs with a love for te reo has got to be good.

Very, very happy, says my friend Tim McKinnel. His long fight for justice for Teina Pora was rewarded by both the new PM and the new justice minister Andrew Little’s announcement that justice will indeed be delivered. And perhaps for others through the new Criminal Case Review Commission.

My family come from a long line of bushies and I hope technological changes won’t cut too many out of work when forestry services make a comeback to Rotorua. I think about Te Taitokerau Māori Forestry Collective and the Māori Tourism clusters I know up north and bet they’re smiling.

I think about those of us who create stories, music, documentaries and films — competing for dwindling broadcast platforms for which we have to jump through endless hoops. I’m confident there’ll be more money to generate high quality “content” that really is Aotearoa on Air.

I consider my friend this week, struggling with thoughts so dark, that I contacted Mike King in desperation. Maybe Mike will get a chance to contribute to mental health and suicide prevention strategies that will actually make a difference?

I think about Lucky, who begs in Grey Lynn. He describes himself as an alkie and a carver. Even before the election, he told me that he wanted to see Winston and “that lady, not Helen Clark but the other one” in charge.

I wonder if he knows?

Five minutes after Winston Peters declared his party was going with Labour, my lovely neighbour Barbie burst through our kitchen door in a fit of squeals to deliver hugs all round. We cracked open a dusty bottle of wine found at the bottom of a spare wardrobe and talked about why we voted the way we did. About how we’re okay, but voted for those who aren’t.

When Winston decried capitalism, it sent a signal of hope that the incoming government will not only keep funding the ambulance at the bottom of the cliff, but might start chipping away at the hideously flawed economic and political system that sends us off the cliff in the first place. Because that’s where the fundamental change needs to happen for real transformation. It’s a big damn ask in a short time and I’m not sure what the plan is but even starting that conversation is new.

Not everyone’s happy, of course.

National and their voters, some Auckland motorists, a farmer from Northland, the head of the Employers and Manufacturers Association, Mike Hosking, Tariana Turia, Richard Prebble and Hone Harawira.

It won’t be smooth sailing. In response to a question about the Foreshore and Seabed, Willie Jackson declared on The Hui: “I think most people don’t care.”

That’s not quite true. Most of us accept that the new Labour leader represents a new era for the party and that the current coalition is far more appealing than the previous one. Willie’s comment was immediately followed up by, “they care about housing, health and education.”

Still, Newshub and their ilk trawl other media to harvest headlines. A sentence out of context is like a red flag to a bull. Last week the bull was Duncan Garner attacking Taika Waititi. This week, the wheels truly came off as Hone Harawira abused and threatened Willie in English, live on air. An astonished Scotty Morrison reprimanded his guest for trampling on te mana o te reo given Hone was a guest on Te Karere, TVNZ’s Māori language news service.

But here’s the thing. It doesn’t need to be an either-or scenario. I want it all. A more kind, people-focused policy for all New Zealanders AND our rights, affirmed by Te Tiriti, recognised.

Hopefully, we can have a more nuanced discussion, given Kelvin Davis’s new role as Minister of Crown and Māori Relations. There’s stuff around water rights that needs to be addressed and a continued conversation around Treaty-based constitutional arrangements. Imagine if Kelvin created a framework to provide a Treaty audit on every bill? It would cast Kelvin’s role as Minister for Corrections in a whole new light.

Nanaia Mahuta — who went up a notch in my book by having the guts to stand up to the king, Tuheitia — is appropriately the Minister for Māori Development. Some I know in Wellington are hoping for a shake up in Te Puni Kōkiri. Different government agencies are seeking a more collaborative approach with the ministry — less duplication and patch protection.

There are five new Māori ministers in the Labour Party and nine across the government. There’s disappointment in some quarters that different MPs missed out on ministerial roles.

A former cabinet minister told me that it’s unlikely a newbie would ever be given a ministerial role, given the peculiar demands and culture of parliament. And sometimes an experienced candidate either doesn’t want the responsibility or simply doesn’t have any friends to back them.

It was Jacinda Ardern who turned everyone’s prospects around, so no one (including Māori MPs) should suffer from any airs and graces. They were all looking like toast before Andrew Little stepped down. The reality is Jacinda will have to carefully manage expectations. The new government will be accused of doing too much and not enough as we move into the next election.

Can the 18 Māori across Labour, New Zealand First and the Greens work together for the benefit of our people? Can the seven Māori electorate MPs identify solid outcomes they can report against during their term? Can Willie and Meka Whaitiri work a Māori responsiveness strategy across all government portfolios (of which Māori MPs hold 18), that will keep their party honest and help identify distinctive Māori gains? Is there a succession plan to grow a new crop of MPs into leadership positions and attract other candidates to stand in 2021?

I want to see all of that, on top of brakes on plundering our seabeds for iron ore and fossil fuels, improved waterways, and a move towards a carbon-free Aotearoa. We need to revisit the giant trade and investment treaties that threaten our sovereignty and consider also the rising power of Google, Facebook and Amazon.

Let’s look at an education system that prepares our kids and future workforce for huge technological change as we move into an era of drones, synthetic meat and driverless cars. Let’s throw open the doors and support weightless exports that focus on creative, digital and technological expertise.

I hope they don’t want to sleep.

The new government has about two years to rev up the ambulance and rebuild the fence at the top of the cliff so all our babies grow up fed, warm, safe, healthy, and feeling valued.