Māmari Stephens: What some bloody awful cartoons can tell us about ourselves 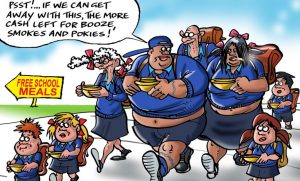 One of the two Al Nisbet cartoons that was the subject of the complaint to the Human Rights Commission.

I don’t get personally offended easily. I learned a while ago not to buy too much into the fever-dreams of keyboard warriors — and most of the people around me who do say outrageous things are not loathsome people, so I don’t care to waste my energy in policing them. And, I’m lucky, I think, to have avoided some of the more obvious slings and arrows of racist misfortune in my life.

Except, I haven’t. Not really.

I’m a child of the urban migrations and the lost World War II generation. Before that, a descendant of colonial wars. And before that, of inter-tribal musket wars, and all the upheavals and trauma, political, demographic and spiritual, in between.

I am who I am because of the collective Te Rarawa and Māori experience of intergenerational losses — including the loss of language, place and space, tribal connection, knowledge, and sheer entitlement.

As an Anglican, I’m also heir to the good and the bad of church history, particularly in the North and Waikato.

Of course, I am the sum of other things as well — my Irish and German forebears and their respective histories — but those things lie lightly on me.

Just because I have a pretty peaceable nature, it would be easy to mistake someone like me, on face value, as “balanced”. Not likely to fly off the handle. Someone who isn’t too “PC”.

Probably so, but I carry the weight of Māori history, like any other “descendant of a New Zealand Māori”, to use that quaint phrase of legislative definition.

And for many of us from Māori families and communities, the historical losses don’t tell the whole story, compounded as it is, by the accumulation of many little and large unintentional slights, deliberate hurts, and omissions over years of racism and bigotry that can be forgiven, but can’t be wished or washed away. Or unfelt, unseen, or unheard.

Yet we’re expected in the eyes of many (not all, of course) simply to be “good sports”.

Come on, let the mispronunciation rest, let the accusation of theft pass, let the suspicious glance lie, live down to that low expectation, let the stereotype alone.

Oh, grow a sense of humour and just let the past be. Don’t be so easily offended.

No matter how that past calcifies around us like an oddly inefficient shell: porous enough to let the hurt through, and unyielding enough to last through generations.

So, as “good sports” we know the engineering students’ bastard “haka” performed annually for 25 years, ending in 1979, was just a generation-long harmless joke.

The deliberate and non-deliberate butchering of Māori names on our airwaves and in our classrooms is just something to be borne — don’t make a fuss.

Naked selfies on a sacred maunga are just awesome T & A photo ops.

Artists, academics and government officials alike can, like magpies, pinch the shiny bits of the language out of dictionaries for their signs, their academic papers, their artworks without ever being able to speak a complete sentence in the language, let alone know what it means.

Yes, we will sit for your portrait, we will die on your canvas, your tote bag, your teatowel. We will be the noble savage of your dreams.

Of course, Māori can never claim a monopoly on the experience of racism and bigotry, and grievance is not a state of grace we should seek to hold on to. But just like the violent and heavy histories, the stories we tell and retell of small (and big) moments of everyday ignorance and racism are indigenous to Aotearoa as well: formed of this soil and of this air, and in this land of shifting light.

And sometimes, just for the purpose of release, those stories must be told and retold with fresh anger each time, as Amie Berghan Paulet shows by sharing some of the words on the tip of her tongue:

Racism is when you label my people ‘dole bludgers’.

Racism is when you tell my people to just ‘get over it, the past is the past’.

Racism is when you look at the ‘statistics’ and not the truth that is hiding behind the statistics.

Racism is when discussing history you expect my people to walk towards you for healing instead of you walking towards us.

Racism is when you take naked selfies on our sacred mountains and then label us as ‘prudes’ or pass over our offence as if it’s because we don’t understand freedom to self-expression.

It’s true that Māori are asked to forgo much in order to preserve the sanctity of “freedom to self-expression”. Up to the limit of the law, of course.

Right. So, what is the limit of the law? Al Nisbet can help us there.

Do you remember, from a few years back, his cartoon caricatures of waddling Māori bludgers with their smokes and their alcohol and the glint of greed in their beady, calculating eyes? The ones with the dull, bloated children with stunted futures and dubious parentage? Remember those cartoons?

Well, unsurprisingly, some of us got upset when they were published back in 2013, and Louisa Wall and South Auckland youth group Warriors of Change took The Press and Marlborough Express newspapers to court. Well, more specifically, to the Human Rights Review Tribunal.

A couple of weeks ago the decision came in: according to the Tribunal the cartoons, offensive as they are, did not breach the Human Rights Act 1993.

How does this happen?

First off, where does this right to freedom of expression come from anyway? This magic notion, that is as limitless as human thought and imagination, is set out in s14 of the New Zealand Bill of Rights Act. And let’s be clear — the right is not absolute. It has limits, including limits imposed by law.

Including this bit of law: section 61(1) of the Human Rights Act 1993. According to this it is unlawful for any person to publish or distribute written matter that is threatening, abusive or insulting — and likely to excite hostility against or bring into contempt any group of persons on (in this case) the basis of race.

It’s not hard to find those cartoons insulting towards Māori, and the Tribunal agreed. Those cartoons could indeed go straight to the top shelf of small and large things designed to add to the weight of everyday bigotry and racism. Straight to the poolroom, even.

Words — or images, as here — can’t merely be hurtful and degrading or insulting. They actually have to be likely to cause other people to become hostile against Māori on the basis of race.

To cut a long story short, the Tribunal said no. The cartoons didn’t reach that threshold. Case closed.

And regardless of what I’m about to say below, in the main, I agree with the result.

Simply to live in this society we have to allow those around us to say horrible things we don’t like, even if those things wound us. And they do. In turn, we have the same ability to insult, wound, and offend. My Facebook feed is replete with people (often brown ones) gleefully taking up the opportunity to rip into others.

This is part of our jostling co-existence — and the cost to our own freedom to insult and offend and express whatever we want would be too great to close down the Al Nisbets of this world, even though his work adds to our burden of racist experiences.

But I did want to call your attention to something else in the Tribunal’s judgment.

In evaluating whether Nisbet’s cartoons were likely to incite hatred, the Tribunal, as directed by the Supreme Court in an earlier case, had to turn to that marvellous legal fiction: The “reasonable person”.

You see, how do we know if insulting words are likely to excite others to be hostile against Māori?

Well, that depends on someone who has never existed — the reasonable person. A kind of paragon of circumspect behaviour that just happens to be lurking around at the time when these published images hit the public arena.

This sensible and sober person would have some knowledge, so would know that the cartoons show Māori people, would have some idea of the stereotypes in play, and would know about local conditions and community. Would that reasonable person, aware of the context and circumstances surrounding the use of the words, view them as exposing Māori to hatred among other people?

But here’s the thing. The “reasonable person” is not allowed, in the context of the Human Rights Act 1993, to be Māori. Not in this case, and probably not ever. The focus is not on how greatly Māori were injured, but on how likely NON-Māori were to become hostile as a result. As the Tribunal said:

But the Tribunal couldn’t really explain to me why it is that the reasonable person in this case and in our general legal system is never Māori.

Perhaps we carry too much weight, too much hurt, you see, to ever be trusted to be truly reasonable. Or truly normal and ordinary.

Just maybe the Māori reasonable person has no sense of humour.