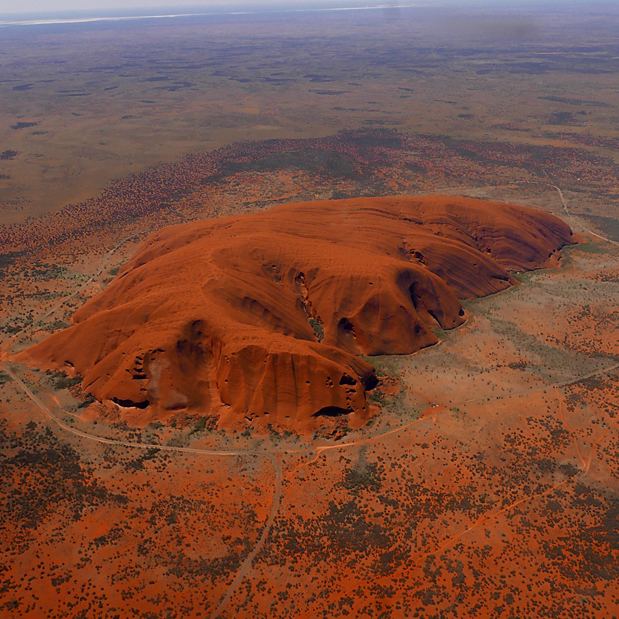 A 350-million-year-old rock is going to have its mana recognised by keeping humans from clambering over it. (Photo: Kennedy Warne)

In two years’ time, Uluṟu /Ayers Rock will be closed to climbing — an outcome the traditional owners have long dreamed of and worked towards. Kennedy Warne was at the rock a few days after the closure was announced. He backgrounds the decision and considers what lessons can be learned.

“Because it’s there” probably seemed a good enough reason for the first European explorers to scale Australia’s iconic rock in the 1870s.

A century later, that had morphed into a more defensive justification — “It’s my country and I’ll climb if I want to” — as legions of sightseers, predominantly white Australians, sweated their way to the top and then bought the T-shirt, the fridge magnet, the bumper sticker proclaiming “I climbed Ayers Rock.”

Imagine, then, the euphoria felt by those Aboriginal owners when, on November 1 of this year, the Uluṟu-Kata Tjuṯa National Park board voted unanimously to close the climb, effective on October 26, 2019. The Central Land Council, which represents indigenous nations in the Alice Springs region, said the decision was “righting a historic wrong.”

Closure of the climb has been a long time coming. In 1983, when the Aṉangu were promised the return of the title deeds to Uluṟu and neighbouring Kata Tjuṯa (formerly known as the Olgas), they were led to believe that climbing could end.

But on October 26, 1985, when the land transfer was officially made — “handback,” as it is called — the government’s position had changed. The deed of return came with three conditions: a 99-year-lease to the government, joint management by the traditional owners and Parks Australia, and a stipulation that visitors could continue to climb the rock if they so desired.

Aṉangu were especially disappointed at the last condition. Uluṟu is an intensely sacred landscape. To this day, certain sites connected with gender-based rituals may not be photographed in case Aṉangu people should inadvertently come across images (on social media, for instance) that they are culturally forbidden from viewing (male sites being seen by females, and vice versa).

Although they could not prevent people from climbing, traditional owners and the national park management mounted a public awareness campaign to let visitors know how Aṉangu felt about the issue.

In 2010, the Uluṟu-Kata Tjuṯa ten-year management plan included, for the first time, a provision that the climb could be closed permanently if any of three conditions were met: if there were adequate “new visitor experiences,” if fewer than 20 per cent of visitors chose to climb, or the “critical factors” visitors gave for coming to Uluṟu were “cultural and natural experiences,” rather than grunting their way up the 348-metre sandstone monolith.

By 2013, all three of those conditions had been met. Even so, no action was taken to end climbing. Pressure from tourism interests, and the assumption that “if they can’t climb, they won’t come,” amounted to a form of intimidation against the Aṉangu.

As board chair Sammy Wilson later commented, it was “as if someone is holding a gun to our heads to keep it open.”

That gun, of course, was commercial: the pressure to keep tourist numbers high. The Aṉangu had a somewhat different perspective. “Whitefellas see the land in economic terms,” said Sammy, “where Aṉangu see it as tjukurpa [cultural law]. If the tjukurpa is gone, so is everything.”

I was in Uluṟu two days after the historic vote was taken. It was my first time there, my first time walking barefoot across warm sand the colour of saffron, my first time seeing the rock’s flanks flame in the setting sun, my first time peering into caves and overhangs where tjukurpa has been taught from one generation to the next for millennia.

I began to consider how the Aṉangu, as part of the national park’s management board, had worked from within to change hearts and minds about their sacred landscape.

First, I noticed their messaging. There is only one path up the rock, and the start of that path is an ideal place for signage. Five large panels greet the intending climber. Rather than making a statement of grievance, the signs are an appeal to sympathy.

“Please don’t climb,” reads the main headline. The tone is not angry or shrill, rather it expresses Aṉangu feeling both for their most sacred place and for the visitors’ wellbeing.

This is not empty emoting. Since the 1950s, at least 36 people have died while climbing. Between 2002 and 2009 alone, 74 climbers needed medical rescues. Aṉangu take their manaakitanga seriously.

At nearby Kata Tjuṯa — 36 domes of conglomerate rock scoured and smoothed by eons of wind and water — signs talk about showing respect: “Kata Tjuṯa is sacred. Our people have always shown respect when visiting this place. They would camp a short distance away and walk in quietly. It is the same today. It is the same for you. Hold in your heart the knowledge that this is a special place. Walk quietly. Tread lightly.”

Messaging throughout the national park stresses the possibility of a deeper encounter with landscape than merely marvelling at scenic splendour. In the cultural centre at Yulara, an interpretation panel quotes Aṉangu elder Tony Tjamiwa: “The tourist comes here with the camera taking pictures all over. What has he got? Another photo to take home, keep part of Uluru. Tourist should get another lens — see inside. Wouldn’t see big rock then. He would see that Kuniya [python] living right inside there as from the beginning. He might throw his camera away.”

A further dimension to the shift from Ayers Rock the scenic wonder to Uluṟu the ancestral dwelling has been the quality of the guiding experience. In 2011, it became a requirement that all guides leading tours in the national park must have successfully completed an accreditation course developed by Charles Darwin University. In particular, this stipulation ensures that Aboriginal origin stories are told correctly by non-Aboriginal guides.

In Aboriginal law, stories are not just narrative accounts of something that happened once. They are powerful invocations to ancestral presences that remain active in country. Country has ears. Country can hear. If the story is wrong, country knows, and country suffers. When country suffers, people suffer.

The guides I met seemed enthusiastically on board with this emphasis on accuracy, and eager to help visitors engage with Aṉangu stories and culture. Just as formal occasions in Australia now commonly start with an acknowledgement of country — “I acknowledge the traditional owners of this land and pay my respects to elders past and present” — the guides for our group gave a greeting in the local Pitjantjatjara language each time we entered the national park.

Such greetings serve not just as a welcome to visitors but also as an announcement to the land that outsiders are entering it.

In regards to the climb itself, the management board did a clever thing. Rather than simply encourage visitors not to climb, they provided a way for them to feel they had contributed something by their decision.

This inspired piece of social psychology enables visitors to see their decision as an active endorsement, rather than a passive abstention. Signing becomes a record of a different kind of achievement. I glanced through some recent comments, many of which mentioned newfound respect for Aboriginal feelings. One visitor wrote: “I climbed it 29 years ago. Came back wiser.”

One unexpected response to the gradually changing perception of Uluṟu as a sacred place and not a theme park has taken the form of the return of the rock itself — or, rather, bits of it.

For years, visitors have purloined pieces of Uluṟu as souvenirs. As awareness of Aboriginal views began to become more widespread in Australian society, people started sending the rocks back. Almost daily, national park staff receive packages of rocks with messages of regret. (The heaviest piece returned so far weighed 32 kg.)

Some of the letter writers claim to have been cursed with bad luck since taking rocks home, but most simply say that they recognise what they (or relatives from decades earlier) did was wrong. The story of these “sorry rocks” has been widely reported and reinforces the message of Uluṟu’s sacredness.

Takeaways from the red centre

So, a 350-million-year-old rock is going to have its mana recognised by keeping humans from clambering over it. What do I take away from this outcome?

First, social change can happen fast. In the 1990s, 80 percent of visitors climbed the rock. By 2010 the number had dropped to less than 40 percent. Five years later it was a mere 16 percent. A survey in 2016 found that more than three-quarters of visitors were aware of the “please don’t climb” message before they arrived, and more than 90 percent said they would not climb.

Second, social change may be hastened if the narratives stress mutual benefit rather than “us” vs “them” antagonism. The Aṉangu position was that not climbing Uluṟu was good for visitors’ bodies (safety), good for their souls (respect for sacredness), and good for building relationships between blackfellas and whitefellas.

Third, there are no recipes or formulae for change. Effective responses come from engagement with place, not from how-to manuals. The “I haven’t climbed Ayers Rock” visitors book was someone’s bright idea that suited the particular problem being addressed.

And the phenomenon of sorry rocks was something no one could have predicted.

Annual visitor numbers to Uluṟu-Kata Tjuṯa National Park are 250,000 and rising. That’s a quarter of a million people not just marvelling at the play of light on a geological icon, but gaining an appreciation of the oldest living civilisation on the planet. And that’s a great outcome.