Is it ever okay to eat a kererū? 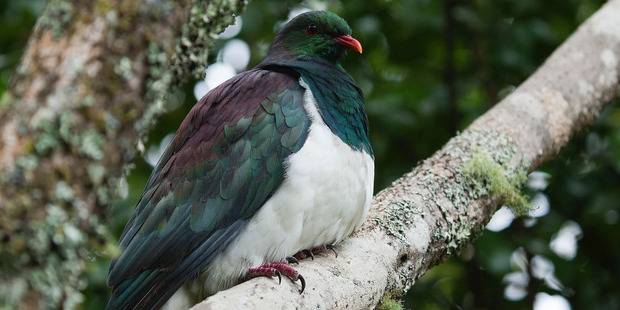 The native wood pigeon – that’s our kererū or kukupa – has been a tasty item on the news menu since allegations surfaced recently about indiscretions by a northern leader, Sonny Tau, on a trip to the South Island. And those stories have opened up a wider discussion about the potential for clashes between Māori rights and the mainstream’s ideas about conservation priorities.

Maggie Barry insists that it’s never okay to eat a kererū. Not ever. She is the Minister of Conservation, and her firm view is that kererū are a protected species under the Wildlife Act 1953 – and so they don’t belong on anyone’s menu.

The other day she was discussing reports that an Ohakune Marae once served kererū to a group of unsuspecting Cabinet Ministers. Maggie took that opportunity to remind New Zealanders that “Māori ate moa as well” and that “we don’t want to eat birds to the brink of extinction”.

Well, no we don’t. But, as the minister should be aware, the primary threats to kererū are introduced predators and deforestation. Not hungry Māori. But her remarks are a reminder of ongoing tension when conservation values and Māori practices collide. Generally, it’s the conservation values that prevail. But, in this case, it might just be Māori.

If Māori values do win through, then it would represent a shift in the struggle between conservation and indigenous rights. Although the two sets of values are often presumed to be the same, there’s actually a bitter history of conflict between the conservation movement and indigenous peoples.

From the Americas to Africa, indigenous peoples have often been displaced and their rights denied in the name of “conserving” nature – even though many indigenous people had already been conserving nature for thousands of years before they were colonised by the thoughtful, sensitive migrants from Europe.

For instance, in the US, on the land now known as Yosemite National Park, the Ahwahneechee band of Miwoks were forcefully expelled from a landscape they had cultivated for about 200 generations.

This model was so successful that it was exported to Africa where an estimated 20 million indigenous people were expelled to make way for conservation projects.

There has been nothing as brutal as that in New Zealand, yet the same principle is at work. To protect territory – to conserve – governments believe they sometimes must control certain activities (or people) that could be contrary to conservation.

The power to control is intensely political and the impact can overwhelmingly fall on one group. In New Zealand, that’s often been Māori who have been excluded from undertaking traditional activities.

None of this is to say that Māori oppose conserving the environment. Instead, it’s just that the impact of New Zealand’s conservation policy has been unfair. Not only have many traditional practices come under legislative control, but Māori have had very little say in that legislation.

Fortunately, this is changing. The Department of Conservation is now obliged to consult with Māori. And some settlements now provide limited harvesting rights for some protected species.

Yet there’s actually a better conservation framework than the Wildlife Act when it comes to protecting kererū:

Rāhui is a form of tapu that can be imposed to restrict access to, or the use of, an area or resource. It’s like a framework for conservation. And, with kererū, it could strike the balance between conservation and Māori rights better than the Wildlife Act ever could.