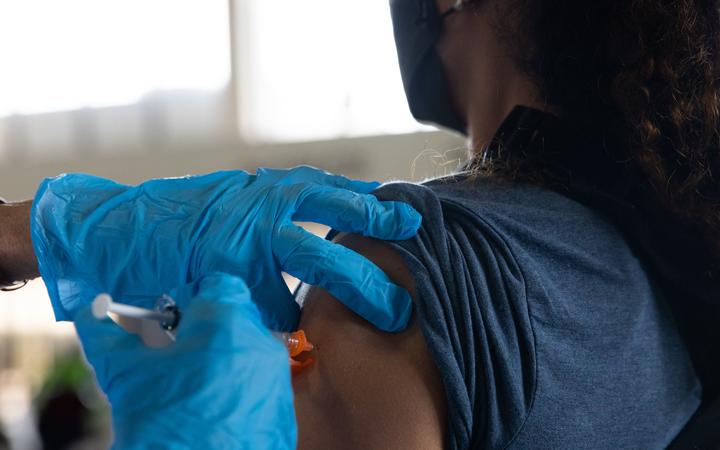 Pasifika have the highest rates of Covid testing and now lead vaccinations in the over-40s age group. Not that you’d know it from the latest round of racist abuse aimed at Pacific communities. (Photo: RNZ/AFP)

Once again, news of the Pacific ethnicity of many of the Covid cases in the latest outbreak has brought the racists out of the woodwork. Emmaline Pickering-Martin says the media need to behave more responsibly when it reports ethnicity.

It’s been a year since I penned a response to the Covid outbreak which sent Auckland into a second lockdown in August 2020.

In that piece, I discussed the intersection of Covid and racism and privilege, and how we as a society seemed blind to all of it — unless, of course, you were Pacific. Then you understood the intersections very well.

So here I am, a year on, trying to comprehend the lack of awareness that we, as a society, still have.

This lockdown, our first Level 4 for 2021, was prompted by a case of the new Delta variant of Covid that began in Devonport.

It’s a small seaside suburb on the north shore of Tāmaki Makaurau nestled at the foot of Takarunga, or Mt Victoria as it’s become known to Pākehā. (Fun fact: Takarunga (hill standing above) had a partner, Takararo (hill standing below) that was quarried by colonisers when they “settled” Devonport and the surrounding area.)

But I digress. A man who lives in Devonport, who is most likely Pākehā (because: Devonport), tested positive for the Delta strain of Covid. He and his wife had been on a trip to the Coromandel before being tested. He was an avid scanner, which meant that his “locations of interest” were easily found.

Then the virus went on its own trip throughout Tāmaki and all the way down to Pōneke. During its travels, the virus visited at an Assembly of God church in Māngere on a Sunday. Here the virus did its thing and shared itself around.

What happened next, via the media, however, has transported me all the way back to August 2020.

Earlier this week, Dr Ashley Bloomfield announced that more than half of the new cases of Covid are of Pacific ethnicity. He then said Pacific people have the highest rates of testing and that they are to be commended.

But what came next was pretty far from commendations.

Almost immediately after announcing these facts, the mainstream media jumped on board with their ever so subtly racist headlines:

This contrasted with the style of earlier headlines when we first heard about the Devonport case. 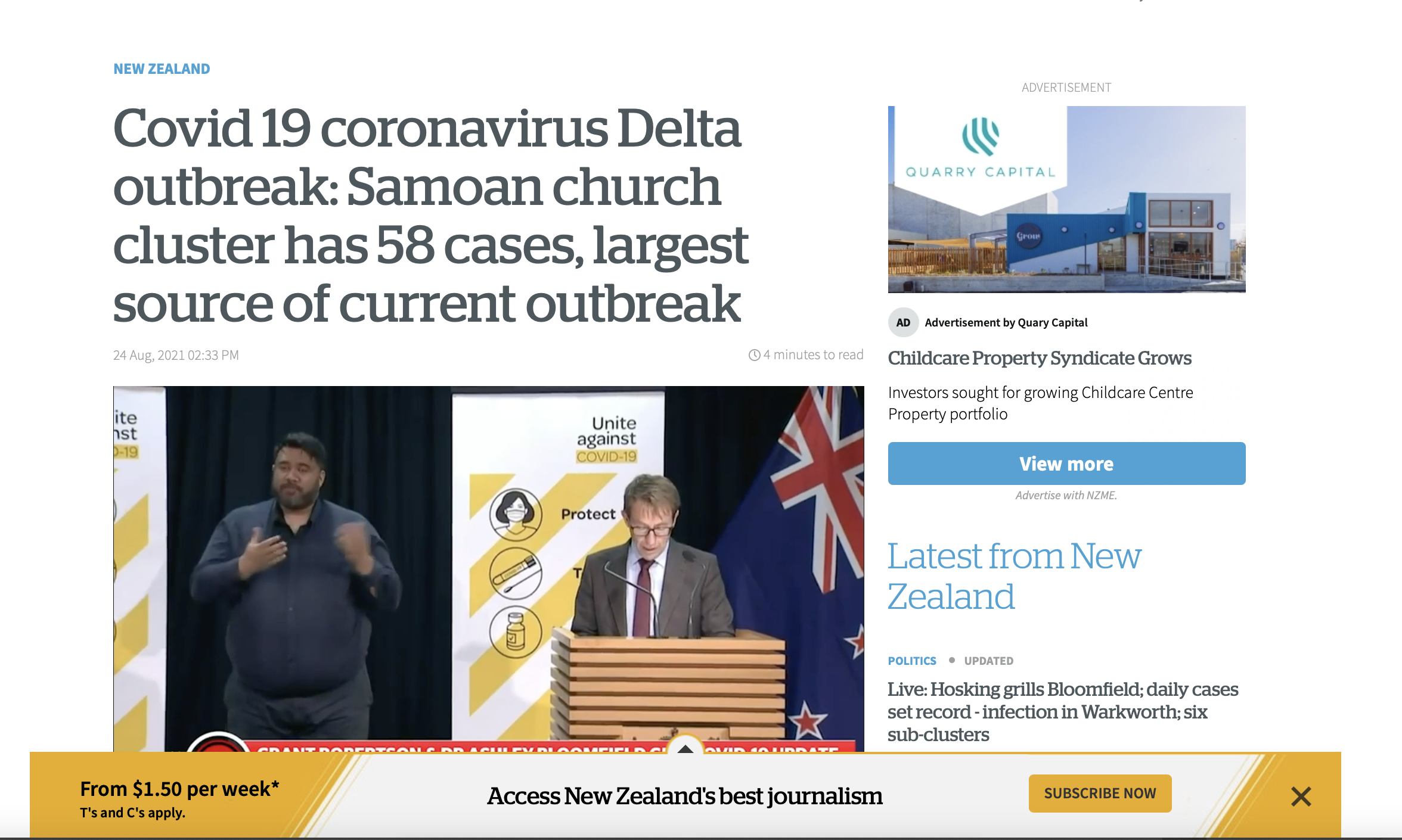 To most people, those Sāmoan headlines may just look like headlines. But, for Pacific people, as we’ve seen in the past, reporting like this leads to the racist abuse of Pacific communities — and, by osmosis, South Auckland.

It’s been a whole year since we went through this, and yet, here we are again, with mainstream media ignoring, or perhaps not even seeing, the very real damage done by this type of clickbait heading.

We’ve seen multiple cases of racism towards our people this week. Abusive messages received by many of us. Calling us “dumb coconuts”. Telling us it’s our fault because we drink kava and share cups. Saying this is why they don’t hire effing coconuts or let effing coconuts stay in their rental properties.

These are all real examples of messages received in the last two days alone. And they have a real impact. I know I’m far from being the only Pacific person who has felt both enraged and hurt by the racism being directed at our communities this week.

Not to mention the report of two Pālagi policemen stopping a car with two young Pacific people going to the airport vaccination centre — not believing they were heading there and telling them they’d be fined $300 if they were seen driving around again.

Must be nice to be a cop pulling over young Pacific people this week, when last week you let so many Pākehā flee the city and head for their holiday homes up and down the line.

Northland friends of mine who live in Whangaruru have described how their little village, which is usually so quiet until the holidays, is suddenly full again. So much for our “Team of 5 million”. 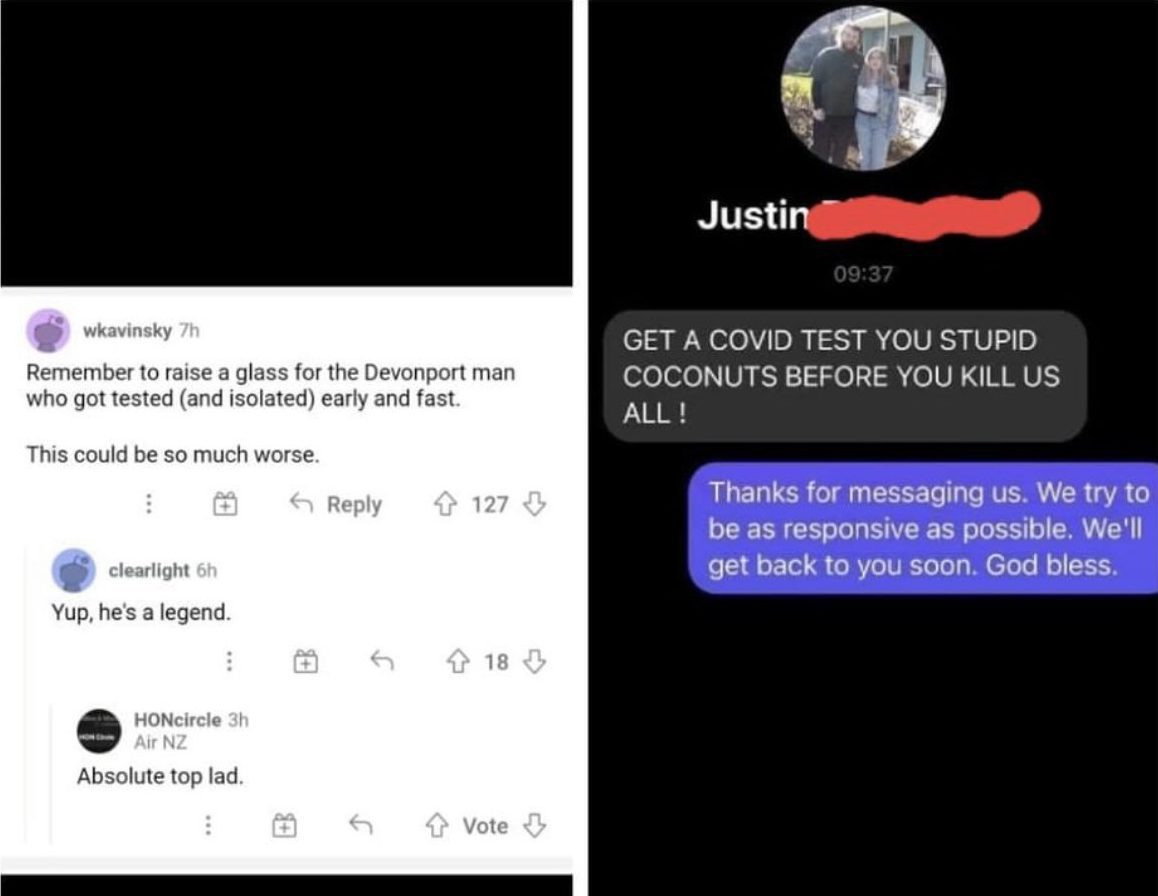 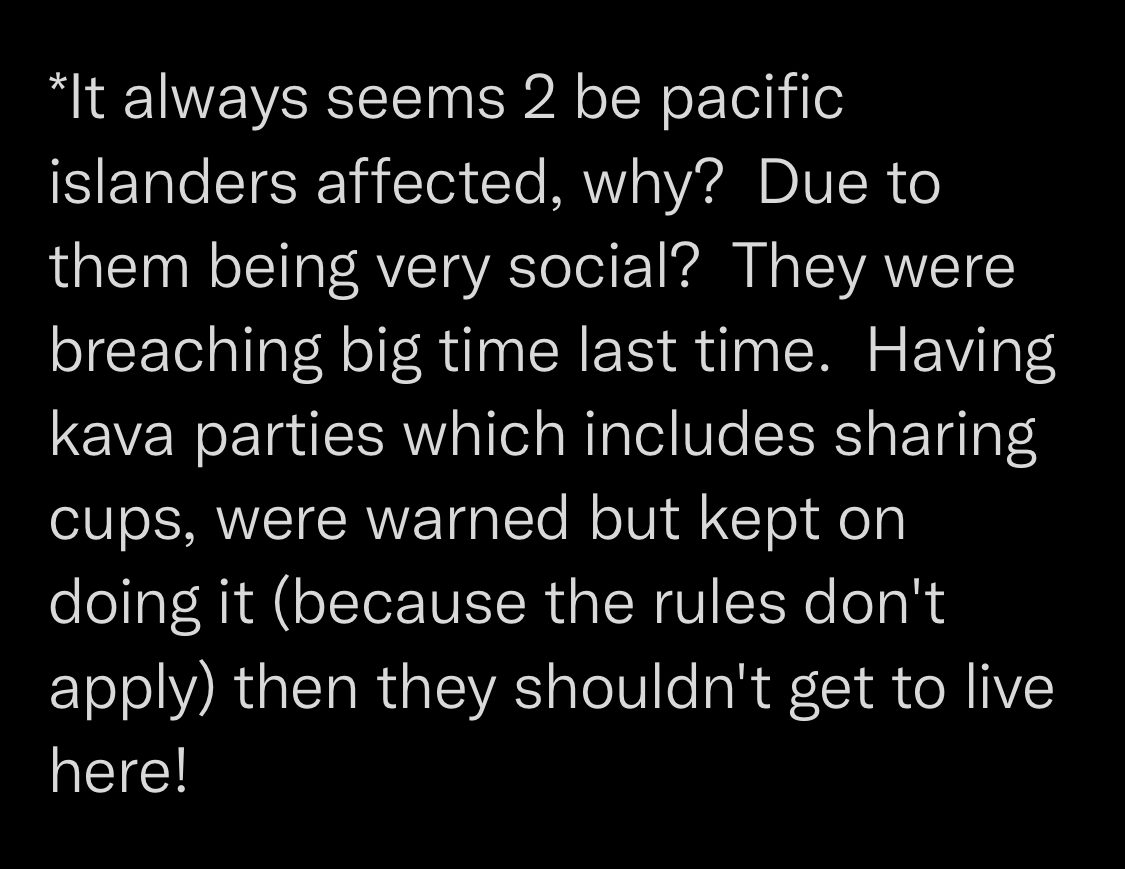 Dr Bloomfield did the correct thing in talking about percentages of ethnicities of new cases. We need to know that so we can help keep our people safe. It puts us on high alert.

But we don’t need to be told to get tested by racist idiots. Throughout this pandemic, Pacific have had the highest rates of testing of any ethnicity in the country. And in the last few days, with drive-through vaccination locations popping up in Auckland and Wellington, and a more targeted approach to vaccinating our communities, Pacific people have been quick to take the opportunity to keep our families and communities safe. As RNZ reports, we’re now leading rates of vaccination for the over 60s and over 40s. Frankly, we’d have been there sooner if the vaccination rollout had been better at targeting our people.

The media needs to behave responsibly when it reports the cases within our Pacific communities.

Imagine seeing a headline like this: “Pākehā man from Devonport index case”. Or this one: “26 new cases today a Pākehā cluster”.

Yet I’ve seen the “Birkdale Social Network Group” and the “South Auckland Samoan Church Cluster”. How is one “a group” and the other “a cluster”? Why do some get their ethnicity front and centre in a headline, and others don’t?

Well, it’s because, for the most part, in mainstream media, Pākehā are considered the norm. They are the centre — and news is largely about what happens to them, or what affects them. And that means that we, as Māori and Pacific peoples, are the “other”. And we are treated as such.

But isn’t it time to put an end to that? Surely, we’ve all come to understand the impact  of colonisation — and that, in the wider Pacific region at least, it’s actually Pākehā who are the “other”.

So reporting on our people as if we’re some kind of anomaly is not okay. There is well-informed, neutral reporting and commentary — and then there are clickbait stories, commentary and headlines that pander to our country’s racist underbelly.

Actually, can we even say that it’s an underbelly anymore? There’s so much evidence at times — and this week has been a case in point — that we’re living in a straight-up racist country. Check the Facebook comments section on any mainstream media platform and you’ll see just how big an appetite there is for racist clickbait headlines.

Racism, however, is just one part of the issue this time round. Another concern is the lack of a clear and effective vaccination rollout for Māori and Pacific peoples.

Long before this lockdown, our leaders were calling out for a strong plan for our people. We understand vaccine hesitancy within Māori and Pacific communities. We understand the volume of misinformation out there. And we understand the language and cultural barriers, and the problems of accessibility.

So why wasn’t there a Pacific focused rollout led by Pacific communities, running alongside the everyday rollout? We know that there’ve been at-risk community members wanting to book vaccines since vaccination began, but with the online “one size fits all” system, they haven’t been able to. Not to mention the real digital divide between Māori and Pacific communities on the one hand, and Pākehā communities on the other.

The inequity is blindingly obvious, but no one really seems to be able to hand over the reins and let us do what we do best: care for ourselves.

Even today I read an email that said Māori health providers had been trying to encourage vaccinations in their communities, but the online system wasn’t letting people book because of the “criteria” for the rollout, so people were just hoping for walk-ins.

How is this okay? We’ve had more than enough time to iron out all these issues and also to hand the rollout to communities to lead themselves.

Emmaline Pickering-Martin was born in Suva and raised between Ba and Nadi in Fiji. She migrated to join her whānau in Aotearoa in the late ‘90s, and has three children who share Fijian, Māori, Sāmoan and Tuvaluan whakapapa. Emmaline is a teacher who has taught in primary and intermediate schools across Tāmaki Makaurau. She has a master’s in Pacific Studies with first class honours, and is now a professional teaching fellow at the University of Auckland, and comms advisor for Hāpai Te Hauora Māori Public Health.